The Red Rooster Cookbook: The Story of Food and Hustle in Harlem

When the James Beard Award-winning chef Marcus Samuelsson opened Red Rooster on Malcolm X Boulevard in Harlem, he envisioned more than a restaurant. It would be the heart of his neighborhood and a meet-and-greet for both the downtown and the uptown sets, serving Southern black and cross-cultural food. It would reflect Harlem's history. Ever since the 1930s, Harlem has been a magnet for more than a million African Americans, a melting pot for Spanish, African, and Caribbean immigrants, and a mecca for artists.

Interspersed with lyrical essays that convey the flavor of the place and stunning archival and contemporary photos, The Red Rooster Cookbook is as layered as its inheritance.

About the author
Marcus Samuelsson

MARCUS SAMUELSSON owns Red Rooster Harlem, Ginny's Supper Club, and Street Bird. He is the author of Marcus Off Duty; the New York Times bestseller Yes, Chef; the James Beard Award-winning Soul of a New Cuisine; and Aquavit. He frequently appears as a judge on Chopped and lives with his wife in Harlem.

"Samuelsson’s unorthodox Red Rooster Cookbook is a literary love letter to Harlem...he goes beyond recipes to write an ode to the neighborhood—and the people, places, and problems in it—that made him."

“[T]he Red Rooster Cookbook is more than a collection of recipes and anecdotes from [Samuelsson’s] Harlem restaurant. It is a tribute to this world-renowned New York neighborhood and the people who live and work there — just as Samuelson so proudly and happily does.”

"Mr. Samuelsson was born in Ethiopia and raised in Sweden, but he has made Harlem his home, and it’s clear in 'The Red Rooster Cookbook: The Story of Food and Hustle in Harlem' that he has found magic there. The restaurant, which opened in 2010, was a meditation on modern Harlem, an embrace of its past and a vision for its future — vibrantly diverse, effortlessly cool...the book’s real charm lies in what it captures: the spirit of this particular place."

"Beloved New York City chef Marcus Samuelsson strikes again with The Red Rooster Cookbook. The chef — who has four other cookbooks, plus a memoir, to his name — presents recipes from his dynamic Harlem restaurant, each reflecting the unique cultural influences of both the place and the man, like Ethiopian spice-crusted lamb and brown butter biscuits. Along with recipes, the book offers essays and vintage photos of Harlem scenes gone by."

"Samuelsson sheds light on what compelled him to leave the world of foie gras and foams to cook, literally and figuratively, closer to home.

The result is a restaurant-and now a cookbook-featuring his style of soul food, embracing American, Ethiopian, and Swedish comfort dishes... [M]usic, specifically jazz, informs Samuelsson's neighborhood, his writing, and given its many riffs and collaborations, his cooking style, too."

“While Harlem has long occupied a mythical place in the American imagination, it is also a place where human beings live, work, raise and educate their children, and eat. The revitalization of Harlem is one of the most important social and economic developments of this generation, and the role of cultural institutions is central to that process. To a list including the Studio Museum and the Schomburg Center, one must add the Red Rooster, which has rapidly become the gathering place for the cultural glitterati, where conversation and music are nourished by Marcus’s sublime cuisine. Who would have thought that Ethiopia and Sweden and the American South would meet on a menu in Harlem?”

“I met Marcus Samuelsson when he was just twenty-four years old and already a three-star chef at Aquavit. His humility and humble ways impressed me so much. Marcus taught me how to appreciate the work and the cooking that I do. His inclusive cuisine served at Red Rooster personifies Harlem and the gumbo pot of this country.”

“Marcus Samuelsson’s Red Rooster Cookbook has all the honesty, heart, and good taste that we have come to expect from this great chef. As I read this book, I felt immersed in Marcus’s glorious Harlem-centric universe. And then when I cooked from the book, I felt as if I got to make a little of his magic into my own.”

“In the Red Rooster Cookbook, Marcus will show you in a very tasty way his passion and talent for soul food and his love for music. The book is full of colorful images and original recipes inspired by the melting pot of his life in Harlem. Marcus’s celebration of American cuisine will take you on a tantalizing journey that has transformed the dining scene in his legendary New York neighborhood.”

"His new book, The Red Rooster Cookbook, celebrates the place where his pickled herring gets along well with cornbread. Vibrantly eclectic is an understatement for the mix of recipes here, from Fried Yardbird and Brown Butter Biscuits to Puerco en Cerveza, Trout with Ginger and Citrus and Ethiopian-Spiced Lamb. As a delicious treat, Samuelsson walks us through the lively Harlem scene in lyrical essays studded with photos."

“[With Red Rooster,] the chef was embracing his adopted neighborhood, and the cookbook that comes out of that project is a way to further it: the forward is by Hilton Als, the photography encompasses not only food but the people of the neighborhood, and the pages include other voices as well, from a local jazz pianist, and from a man who’s worked at the Apollo Theater for half a century. But you are here for the food, and Samuelsson does not disappoint.”

“Takes us into [Samuelsson’s] kitchen and his neighborhood. There are stunning portraits of local denizens, a foreword by Hilton Als, playlists for each chapter. The recipes draw on soul food, Samuelsson’s Ethiopian heritage, and more — from fried yardbird to lamb and grits with grilled chile vinaigrette to Obama’s short ribs, part of a menu when the president came to eat. As much as it is a cookbook, this is a paean to a place.” 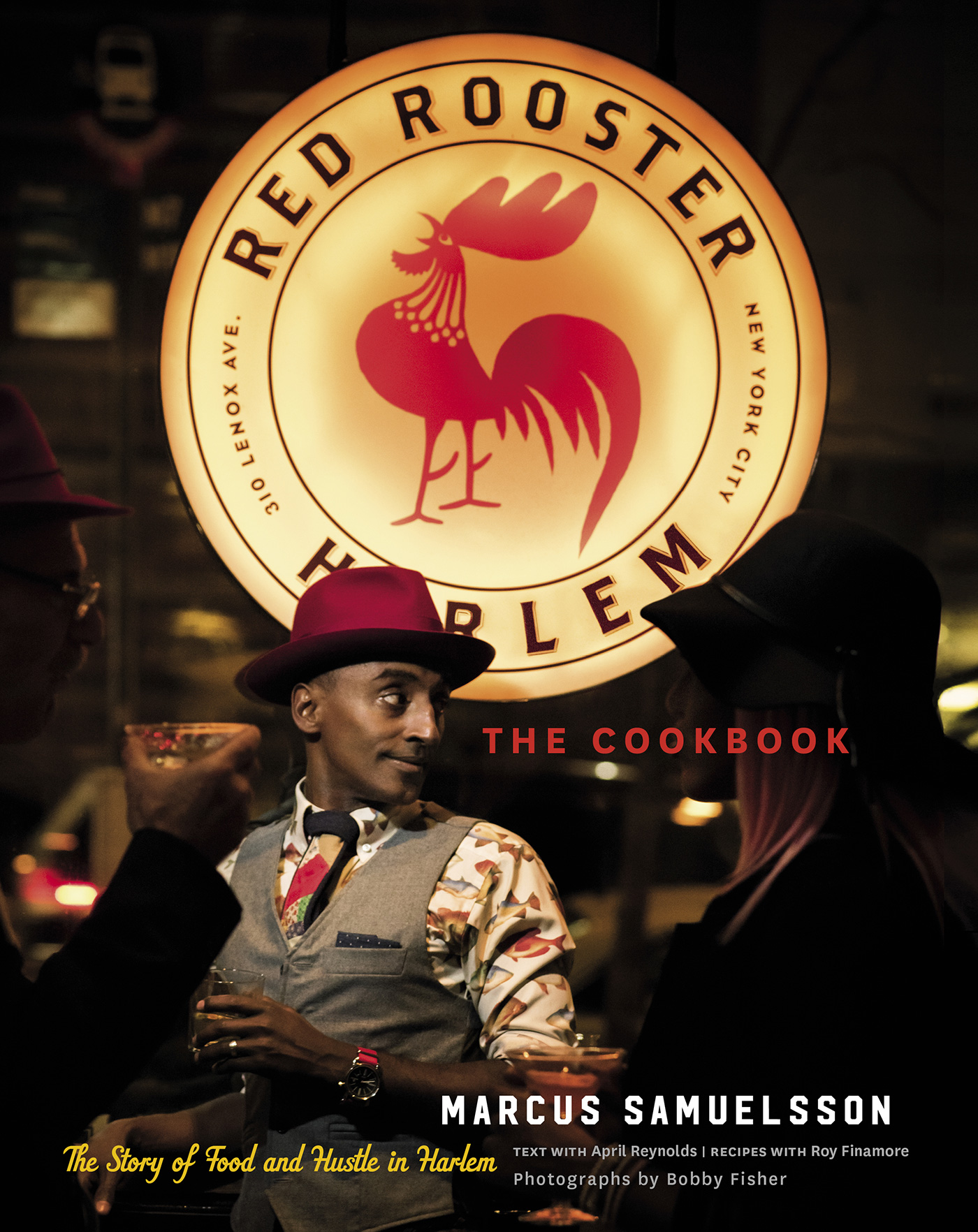