The Prague Cemetery is the latest international bestseller from Umberto Eco, author of The Name of the Rose. Nineteenth-century Europe abounds with political and religious conspiracies from Turin to Prague to Paris.  What if, behind it all, lay one lone man determining the fate of the Continent?

The #1 international bestseller, from Umberto Eco, author of The Name of the Rose

Nineteenth-century Europe—from Turin to Prague to Paris—abounds with the ghastly and the mysterious. Jesuits plot against Freemasons. Italian republicans strangle priests with their own intestines. French criminals plan bombings by day and celebrate Black Masses at night. Every nation has its own secret service, perpetrating forgeries, plots, and massacres. Conspiracies rule history. From the unification of Italy to the Paris Commune to the Dreyfus Affair to The Protocols of the Elders of Zion, Europe is in tumult and everyone needs a scapegoat. But what if, behind all of these conspiracies, both real and imagined, lay one lone man?

“Choreographed by a truth that is itself so strange a novelist need hardly expand on it to produce a wondrous tale . . . Eco is to be applauded for bringing this stranger-than-fiction truth vividly to life.” – New York Times

About the author
Umberto Eco

UMBERTO ECO (1932–2016) was the author of numerous essay collections and seven novels, including The Name of the Rose,The Prague Cemetery, and Inventing the Enemy. He received Italy's highest literary award, the Premio Strega, was named a Chevalier de la Légion d'Honneur by the French government, and was an honorary member of the American Academy of Arts and Letters.

A PASSERBY ON THAT GRAY MORNING

A passerby on that gray morning in March 1897, crossing, at his own risk and peril, place Maubert, or the Maub, as it was known in criminal circles (formerly a center of university life in the Middle Ages, when students flocked there from the Faculty of Arts in Vicus Stramineus, or rue du Fouarre, and later a place of execution for apostles of free thought such as Étienne Dolet), would have found himself in one of the few spots in Paris spared from Baron Haussmann’s devastations, amid a tangle of malodorous alleys, sliced in two by the course of the Bièvre, which still emerged here, flowing out from the bowels of the metropolis, where it had long been confined, before emptying feverish, gasping and verminous into the nearby Seine. From place Maubert, already scarred by boulevard Saint-Germain, a web of narrow lanes still branched off, such as rue Maître-Albert, rue Saint-Séverin, rue Galande, rue de la Bûcherie, rue Saint-Julien-le-Pauvre, as far as rue de la Huchette, littered with filthy hotels generally run by Auvergnat hoteliers of legendary cupidity, who demanded one franc for the first night and forty centimes thereafter (plus twenty sous if you wanted a sheet).

If he were to turn into what was later to become rue Sauton but was then still rue d’Amboise, about halfway along the street, between a brothel masquerading as a brasserie and a tavern that served dinner with foul wine for two sous (cheap even then, but all that was affordable to students from the nearby Sorbonne), he would have found an impasse, or blind alley, which by that time was called impasse Maubert, but up to 1865 had been called cul-de-sac d’Amboise, and years earlier had housed a tapis-franc (in underworld slang, a tavern, a hostelry of ill fame, usually run by an ex-convict, and the haunt of felons just released from jail), and was also notorious because in the eighteenth century there had stood here the laboratory of three celebrated women poisoners, found one day asphyxiated by the deadly substances they were distilling on their stoves.

At the end of that alleyway, quite inconspicuous, was the window of a junk shop that a faded sign extolled as Brocantage de Qualité — a window whose glass was covered by such a thick layer of dust that it was hard to see the goods on display or the interior, each pane being little more than twenty centimeters square, all held together by a wooden frame. Beside the window he would have seen a door, always shut, and a notice beside the bell pull announcing that the proprietor was temporarily absent.

But if, as rarely happened, the door was open, anyone entering would have been able to make out, in the half-light illuminating that dingy hovel, arranged on a few precarious shelves and several equally unsteady tables, a jumble of objects that, though attractive at first sight, would on closer inspection have turned out to be totally unsuitable for any honest commercial trade, even if they were to be offered at knock-down prices. They included a pair of fire dogs that would have disgraced any hearth, a pendulum clock in flaking blue enamel, cushions once perhaps embroidered in bright colors, vase stands with chipped ceramic putti, small wobbly tables of indeterminate style, a rusty iron visiting-card holder, indefinable pokerwork boxes, hideous mother-of-pearl fans decorated with Chinese designs, a necklace that might have been amber, two white felt slippers with buckles encrusted with Irish diamantes, a chipped bust of Napoleon, butterflies under crazed glass, multicolored marble fruit under a once transparent bell, coconut shells, old albums with mediocre watercolors of flowers, a framed daguerreotype (which even then hardly seemed old) — so if someone, taking a perverse fancy to one of those shameful remnants of past distraints on the possessions of destitute families, and finding himself in front of the highly suspicious proprietor, had asked the price, he would have heard a figure that would have deterred even the most eccentric collector of antiquarian teratology.

And if the visitor, by virtue of some special permission, had continued on through a second door, separating the inside of the shop from the upper floors of the building, and had climbed one of those rickety spiral staircases typical of those Parisian houses whose frontages are as wide as their entrance doors (cramped together sidelong, one against the next), he would have entered a spacious room that, unlike the ground-floor collection of bric-a-brac, appeared to be furnished with objects of quite a different quality: a small three-legged Empire table decorated with eagle heads, a console table supported by a winged sphinx, a seventeenth-century wardrobe, a mahogany bookcase displaying a hundred or so books well bound in morocco, an American-style desk with a roll top and plenty of small drawers like a secrétaire. And if he had passed into the adjoining room, he would have found a luxurious four-poster bed, a rustic étagère laden with Sèvres porcelain, a Turkish hookah, a large alabaster cup and a crystal vase; on the far wall, panels painted with mythological scenes, two large canvases representing the Muses of History and Comedy and, hung variously upon the walls, Arab barracans, other oriental cashmere robes and an ancient pilgrim’s flask; and a washstand with a shelf filled with toiletry articles of the finest quality — in short, a bizarre collection of costly and curious objects that perhaps indicated not so much a consistency and refinement of taste as a desire for ostentatious opulence.

Returning to the first room, the visitor would have made out an elderly figure wrapped in a dressing gown, sitting at a table in front of the only window, through which filtered what little light illuminated the alleyway, who, from what he would have been able to glimpse over that man’s shoulders, was writing what we are about to read, and which the Narrator will summarize from time to time, so as not to unduly bore the Reader.

Nor should the Reader expect the Narrator to reveal, to his surprise, that this figure is someone already named, since (this being the very beginning of the story) no one has yet been named. And the Narrator himself does not yet know who the mysterious writer is, proposing to find this out (together with the Reader) while both of us look on inquisitively and follow what he is noting down on those sheets of paper

"I find this book fascinating, perhaps the best Eco has written in years." —Huffington Post

"[Eco's] latest takes that longtime thriller darling, the conspiracy theory, and turns it into something grander...Sold to 40 countries and said to be controversial; a speed-read with smarts." —Library Journal, "My Picks"

"A whirlwind tour of conspiracy and political intrigue...this dark tale is delightfully embellished with sophisticated and playful commentary on, among other things, Freud, metafiction, and the challenges of historiography." —Booklist 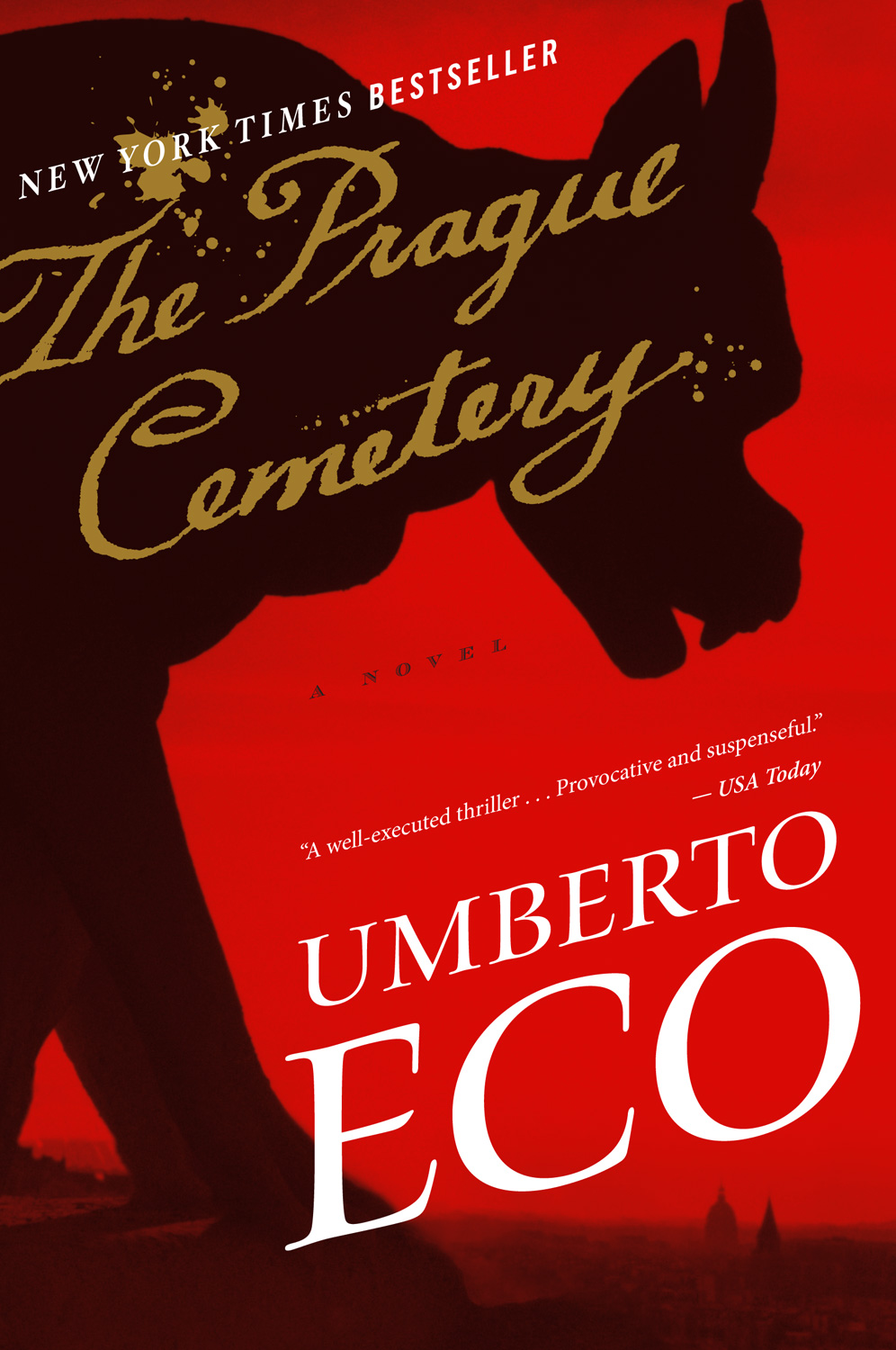