The Playbook: 52 Rules to Aim, Shoot, and Score in This Game Called Life

by Kwame Alexander and Thai Neave
$16.99

Kwame Alexander shares poetry and inspiring lessons about the rules of life, as well as uplifting quotes from athletes such as Stephen Curry and Venus Williams and other exemplars like Sonia Sotomayor and Michelle Obama in this motivational and inspirational book just right for graduates of any age and anyone needing a little encouragement.

You gotta know the rules to play the game. Ball is life. Take it to the hoop. Soar. What can we imagine for our lives? What if we were the star players, moving and grooving through the game of life? What if we had our own rules of the game to help us get what we want, what we aspire to, what will enrich our lives?

Illustrated with photographs by Thai Neave, The Playbook is intended to provide inspiration on the court of life. Each rule contains wisdom from inspiring athletes and role models such as Nelson Mandela, Serena Williams, LeBron James, Carli Lloyd, Steph Curry and Michelle Obama. Kwame Alexander also provides his own poetic and uplifting words, as he shares stories of overcoming obstacles and winning games in this motivational and inspirational book just right for graduates of any age and anyone needing a little encouragement.

About the author
Kwame Alexander

Kwame Alexander is a poet, educator, and the New York Times best-selling author of more than thirty-five books, including Rebound, the follow-up to his Newbery medal–winning middle grade novel, The Crossover. Some of his other works include Booked, which was longlisted for the National Book Award, The Playbook: 52 Rules to Help You Aim, Shoot, and Score in this Game of Life, Swing, and the picture books Out of Wonder and The Undefeated, which was longlisted for the National Book Award and won the Caldecott Medal, a Newbery Honor, and the Coretta Scott King Illustrator Award.A regular contributor to NPR's Morning Edition, Kwame is the recipient of numerous awards, including The Coretta Scott King Author Honor, The NCTE/Charlotte Huck Honor, Three NAACP Image Award Nominations, and the 2017 Inaugural Pat Conroy Legacy Award. He believes that poetry can change the world, and he uses it to inspire and empower young people around the world through The Write Thing, his K-12 Writing Workshop. Kwame is the founder of Versify, an imprint of Houghton Mifflin Harcourt. www.kwamealexander.com Twitter: @kwamealexander Instagram: @kwamealexander

Thai Neave is a former SportsCenter Anchor for ESPN and now works as a freelance photographer and journalist.   He currently resides between Los Angeles and Sydney.  You can follow his work at: http://instagram.com/shootinghoops

In 1891, when James Naismith invented the game of basketball with a soccer ball and two peach baskets to use as goals, he also had to create some rules—13 of them in fact. Rules like:

THE BALL MAY BE THROWN IN ANY DIRECTION WITH ONE OR BOTH HANDS AND THE TIME SHALL BE TWO 15-MINUTE HALVES WITH FIVE MINUTES’ REST BETWEEN.

Over the next 100-plus years, these rules would govern the hoops game and make basketball one of the most popular sports in the world.

I believe that sports are a great metaphor for life. In our games, we decide who the best players are to assist us, we flex our skills, and we test our will to win on and off the court. Our character is built during the times we are victorious and also during the times we are met with major challenges. This is when we find out what we’re really made of. There are countless stories of athletes who faced defeat to accomplish historic feats. They, like you and me, had dreams. Big dreams. How do we make our dreams come true? I believe that we have to be passionate, determined, focused, and work hard, in order to succeed. But, we also have to master the rules of the game.

WANT TO BE A BALLER,

WANT TO DO BETTER IN SCHOOL,

WANT TO HAVE BETTER FRIENDSHIPS,

WANT TO SUCCEED IN THE GAME OF LIFE,

In eighth grade, I was eager to succeed. In sports and in popularity. I wanted people to know who I was, especially the girls. I wanted to walk down the halls and get high-fives, daps, and hollas. I wanted to be cool. I wanted to be Da Man! Thing was, I had no idea how to do it. Until a friend named Vince suggested basketball. I was tall and agile and my dad had been a star baller, so I figured what I lacked in actual talent, my genes would make up for. I tried out and made the team.

First game of the season, I bring the ball up the court, dribble the ball between my legs, behind my back, no defender in sight. I get to the half-court line and decide, in front of hundreds of classmates, teachers, parents . . . and girls, that I’m going to shoot, and hopefully score the first points of the game. I throw the ball up right there at the half-court line. It’s the first play of the season, and if I make this, there will be newspaper clippings of me for my kids to read one day. If I make it, everyone will know Kwame Alexander.

The ball goes over the backboard and hits the scoreboard. Me and my coolness get benched. So much for basketball. I finish out the season sitting mostly on the sidelines. One of the rules I’d learned growing up was to never give up, especially when you really want something. So, the following year—my freshman year—I try out for the junior varsity team.

Cedric, my best friend, who was not as tall as I was, but ripped—he had muscles, y’all—suggested that we try out for the football team, because everybody liked football players. I said yes! We both made the team. Wide receivers.

First game of the season, he gallops down one sideline, I speed down the other. I eagerly await my chance to get the ball, score, hear the cheers. I see my mom in the stands, so I wave at her. The quarterback looks my way. Oh yes, it’s about to go down. I’m about to score a touchdown—then everyone will know me. Thing is, I never get the ball. I get knocked flat on my butt by some monster whose actual nickname is, get this, “Monster.” Lights out. Crickets. Cedric goes on to score many touchdowns as the star receiver of our football team. He even plays in college. My mom benches me after the hit. And it’s no more football for me. Truth was, football wasn’t really an interest of mine. I thought it might make me cool, but all it made me was sore. I guess the rule I learned that day was know your strengths, know your passion, know that if your heart isn’t in it, the Monster will hurt you!

Then my mom suggests another sport. Kwame, cool is what you make it, I remember her saying. If you’re bent on playing a sport, why don’t you try tennis?

Tennis? The uncoolest sport on earth. My dad had played high school tennis too. He was a high school competitor of Arthur Ashe—the one exception to the tennis isn’t cool rule. I thought my mom was bonkers. No way I was going to sport a pair of white shorts and an aluminum racket. Thing was, I trusted my mom. She was pretty smart and always had my back. She took me out to the courts, taught me some of the basics, practiced with me. I decided to give it a shot.

SOMETIMES, YOU MAY NOT AGREE WITH OR UNDERSTAND THE ADVICE YOU GET, BUT IF YOU HEED IT, IT JUST MIGHT STICK WITH YOU UNTIL YOU COME TO UNDERSTAND IT.

Until you live it and breathe it! But first you need to say yes to the possibility. You need to be open to new things. You have to say yes to yourself. The most important rule I think I’ve ever learned is that when you’re presented with an opportunity that may seem different or challenging or unknown, sometimes you’ve got to summon the courage to trust yourself and SAY YES!

I tried out for the tennis team and made it. I was number twelve. On a roster of twelve. My father had purchased me a gold-plated tennis racket from K-mart to go along with my corduroy shorts and red Chuck Taylors. I looked nothing like a tennis player, and played even worse. Actually, I didn’t play in one match that first year. I just watched. The next season, I moved up to number nine, and I got to play in my first match, which I won. Suddenly, my confidence was building, but my ego wasn’t. I wanted to be a starter on the team, to play in every match, and that motivated me to keep playing, to keep trying, even when faced with the ridicule of some of my teammates. The older guys on the team didn’t think I was that good, didn’t think I was worthy to be a starter, and didn’t take me seriously. So, I devised a plan. It involved practice. And more practice. And still, even more practice. Six hours every day during summer vacation, we practiced: Me and Shawn and Rob and Paul. And Claudia—the real reason I wanted to be cool.

We all have what it takes to do exactly what we want to do in life, no matter what anyone else says. If someone tells you, “You can’t do this because you are [fill in the blank],” I say embrace the challenge. Wear it like a new pair of Converse or Jordans. Meet it head-on. Find your grit and put in the work to elevate your game.

Be true to your unique, amazing, and awesome self. Motivate yourself, and powerfully step into your dreams to create the life you want, and do not let anyone or anything stop you!

PRACTICE. WORK HARD. FOCUS. PREPARE YOURSELF FOR THE THING THAT YOU WANT TO ACCOMPLISH—ACE A TEST, MAKE A TEAM, JOIN A CLUB, GO TO COLLEGE—WHATEVER IT IS, YOU SIMPLY MUST PUT. IN. THE. WORK.

The next year, I was number four on the team. My dedication had paid off. I played in every match. I won every one. In the district tournament, the number one, two, and three seeds on our team all got beat. Guess who made it to the finals? ...

"The volume reads like a series of locker- room pep talks by a coach with stories to tell and advice to give..."

“A stirring collection of 52 motivational poems-as-rules…”

"The advice never feels heavy-handed, and the author's voice shines through... This will appeal to fans of Alexander's previous middle-grade novels as well as young sports fans."

“Alexander uses sports as a metaphor for life in this earnest gathering of personal reminiscences.” 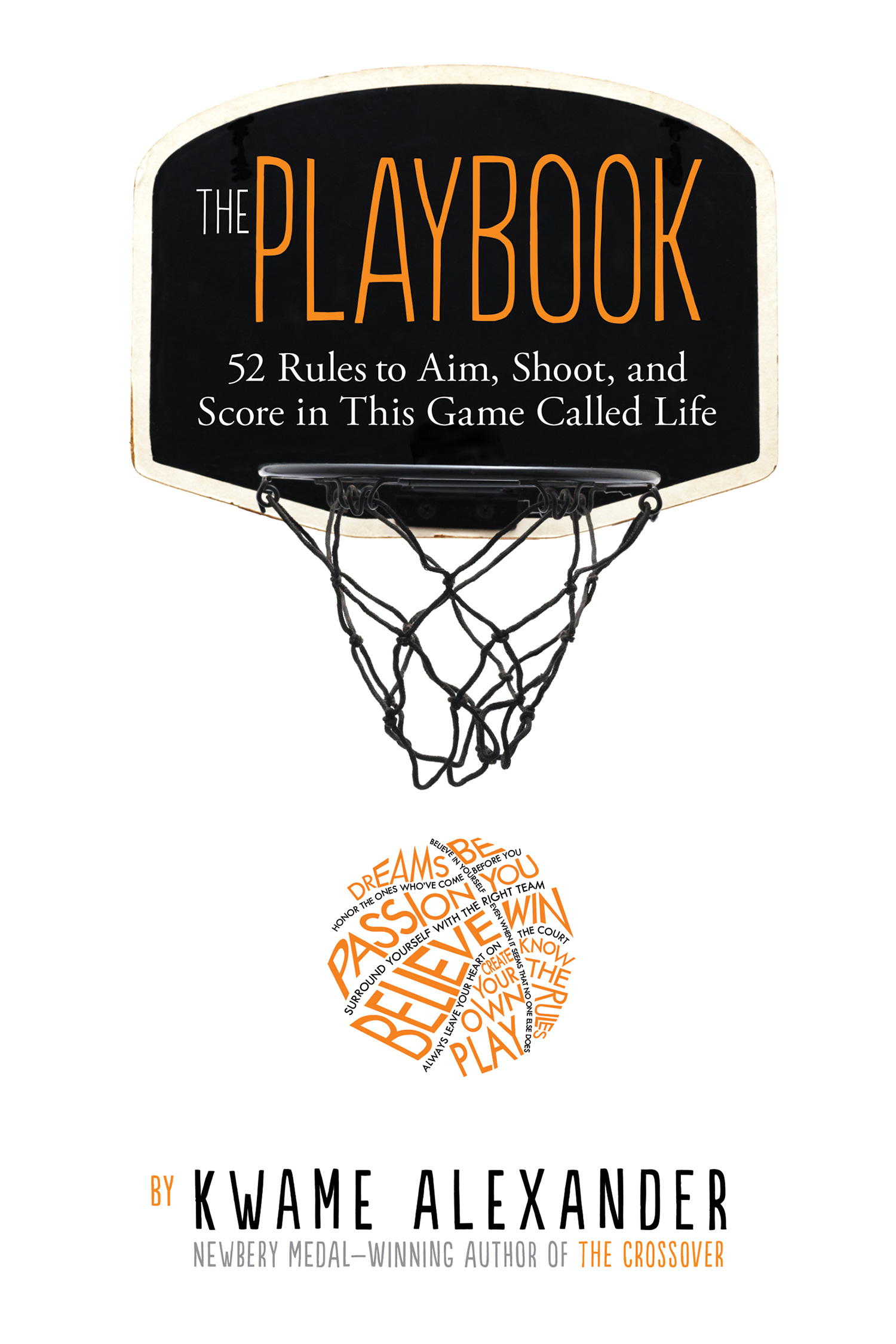