When Treasure's dad disappears and Mom sets out to track him down, twelve-year-old Treasure and her little sister Tiffany are stuck with their Great-Aunt Grace, whose many rules make for a miserable living situation. As time stretches on and Dad doesn't turn up, Treasure, Tiffany, and their mother have to accept that he isn't coming back. It's Great-Aunt Grace who takes them in, and together they learn that their unconventional family can be just as whole without him.

Treasure’s dad has disappeared and her mom sets out to track him down, leaving twelve-year-old Treasure and her little sister, Tiffany, in small-town Virginia with their eccentric, dictatorial Great-Aunt Grace. GAG (as the girls refer to her) is a terrible cook, she sets off Treasure’s asthma with her cat and her chain smoking, and her neighbors suspect her in the recent jewel thefts. As the hope of finding their dad fades, the girls and their great-aunt begin to understand and accommodate one another. When a final dash to their dad’s last known address proves unsuccessful, Treasure has to accept that he’s gone for good. When she goes back to Great-Aunt Grace’s, it is the first time she has returned to a place instead of just moving on. Convincing, fully realized characters, a snarky narrative voice, and laugh-aloud funny dialogue make The Perfect Place a standout among stories of adjustment and reconfigured families.

About the author
Teresa E. Harris

Teresa E. Harris earned her bachelor's degree in English from Columbia University and an MFA in Writing for Children from Vermont College, where she won numerous awards.

Dad has been gone exactly two months, one week, and four days when Mom stands up and says, “I can’t do this anymore.”

“This,” she says, waving her skinny brown arms around like a crazy person. “Stay here in this apartment. I can’t do it. Your father is everywhere in it.”

“No, he’s not,” my sister Tiffany says, looking around from her spot beside me on the couch. She’s seven and what my sixth-grade teacher, Mrs. Levy, would have called very literal-minded.

But Mom is right, I guess. Dad is everywhere in Apartment 2F—his coffee mug is still in the dish drainer and all but two pairs of his shoes are still lined up against the far wall in Mom and Dad’s bedroom. The book he’s reading is still sitting on his nightstand. I like the way the house seems to be waiting along with us for him to come back. But Mom says it again: “I can’t do this.”

Mom doesn’t answer. Instead she goes over to the framed pictures on the mantel. She slides the photo of the four of us at the Meadowlands Fair from one location to another like a game of magic-cup shuffle until it winds up at the far end of the shelf almost out of sight and right beside the picture of her steely-eyed aunt Grace. Mom stares down at Great-Aunt Grace’s picture for a long time, and I wonder if she’s thinking about how, on their wedding day, Great-Aunt Grace told Mom not to marry Dad because he was a rolling stone if she ever saw one. Mom told me this story once when she was mad at Dad for staying out for two days and neglecting to call. I asked Mom what it meant to be a rolling stone and she pressed her lips together and shook her head, like she was sorry she’d told me the story in the first place.

Mom turns to face us now.

Please don’t say we have to leave without Dad.

Tiffany moves closer to me on the couch, rests all of her weight on me. I can’t breathe. I take a puff of my inhaler. The cool air fills my lungs.

Don’t say we have to leave without Dad.

“What are we going to do?” I ask again, my heart banging against my ribs like a paddleball.

Tiffany stands beside me, hopping from one foot to the other as she waits for me to take her leftover brown rice and baked chicken out of the microwave. She has no idea what “evacuate the premises” means. Mom learned the trick from Dad—whenever he decided that it was time for us to move, he’d find a new, crazy-hard way to tell Mom and me so that Tiffany wouldn’t understand and freak out.

I pull the cover off of Tiffany’s plate. Steam hits me full in the face.

“You can eat in front of the TV,” Mom tells her.

“No, she can’t.” Dad never allowed us to eat anywhere but at the dining room or kitchen table. This type of disagreement has been happening between Mom and me ever since he left. She usually wins because she plays the parent card and says, “I’m her mother, Treasure, not you.” That’s exactly what she says this time as she stands at the sink, staring out the window. Her voice is so quiet it could be carried away on the breeze ruffling the curtains.

Tiffany scampers off, and I look at Mom long and hard. Her feet are bare, her toenails unpainted. She’s wearing a black tank top and black denim shorts. She’s been wearing a lot of black lately. I wait until Tiffany turns on the TV and starts singing along with the SpongeBob SquarePants theme song before I start talking.

“What about it?” Mom replies. “I answer phones for Dr. Jackass, and I won’t miss him or his stuck-up patients at all.”

I take a seat at the kitchen table and stare at the back of my mother’s head, the tight curls of her bun. I’m not giving up so easily.

“If we leave, Dad won’t know where to find us when he comes back.”

Mom uses both hands to push herself away from the kitchen counter. Then she comes over to the table and lowers herself into the chair across from me. She reaches for the half-empty pepper shaker and begins to push it back and forth over the scratched wood surface. “And whose fault is it that he won’t be able to find us?”

My skin is a different shade from hers, reddish-brown like Dad’s. I have his confused hair, too, hair that doesn’t know if it wants to be curly, nappy, or straight. I don’t look a thing like Mom. I could walk away from her in a crowd and no one would even know we were related.

Mom wraps her long fingers around the pepper shaker and stares down at her fist.

“I won’t leave. Are you listening to me, Mom? Mom?” I hate the way my voice sounds, high and whiny, and Mom isn’t even paying attention. I bang my fist down on the table.

She jumps. “What the—?” She shakes her head. “You’re just a child, Treasure, and you don’t make the decisions. I do.”

Just a child who walked Tiffany to school every morning after Dad left. Who did the grocery shopping and made sure Tiffany had something to eat every day. Who took Mom food on a tray when she couldn’t get out of bed.

“What if we found him?” I say suddenly.

All this time Mom hasn’t been looking at me. Now she does. “How?” she says, and for a moment I can hear it in her voice—hope. I don’t know how we can find Dad, though; wouldn’t even know where to start.

Mom closes her eyes. “Wishful thinking,” she says. And just like that, I know nothing I say is going to change her mind. We’re going to evacuate the premises, leaving Dad behind.

"Though good family-in-transition stories are not rare, ones that authentically portray an African American experience are, and readers will find this one pretty near perfect."

"Harris weaves humor, a light mystery, and a tender coming-of-age story in this unforgettable novel."

"Readers will find sly humor here as well as the pleasure of seeing justice done on several levels. A satisfying first novel with a realistic but heartening ending."

"The small-town dynamics draw on recognizable characters without becoming stereotypes; Great-Aunt Grace, for instance, is full of surprises. Treasure herself is a resourceful and mature sixth-grader who stands up for herself and earns the well-deserved respect of the adults in her life." 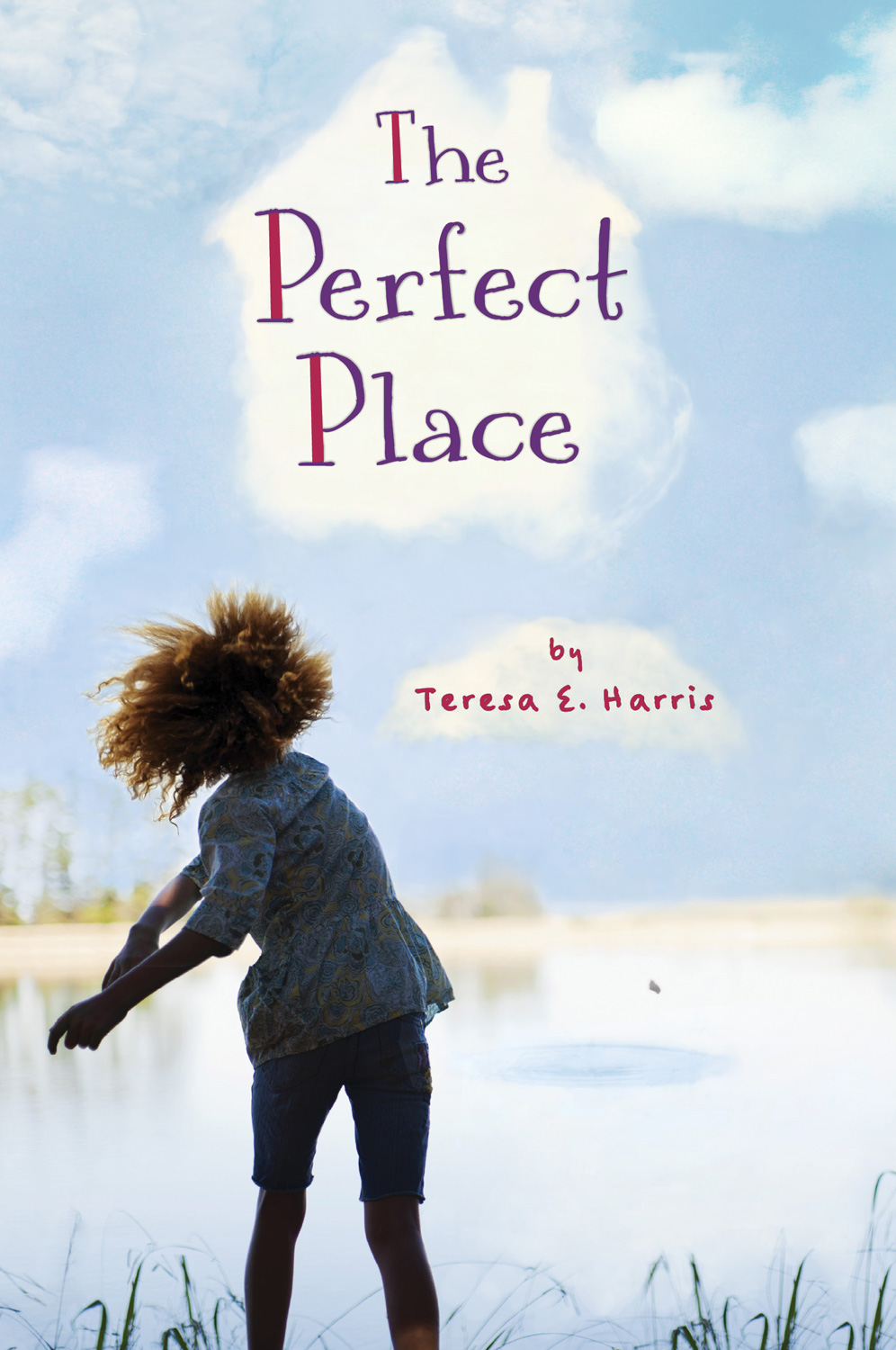