The Patron Saint of Ugly

by Marie Manilla
$19.99
With its irresistible and irreverent blend of Southern Gothic and Sicilian "malocchio," a lush, exuberant tale of a reluctant saint, her unforgettable family, and the myriad difficulties (some real, some imagined) we all face when it comes to loving and being loved.

Born in Sweetwater, West Virginia, with a mop of flaming red hair and a map of the world rendered in port-wine stains on every surface of her body, Garnet Ferrari is used to being an outcast. With her sharp tongue, she has always known how to defend herself against bullies and aggressors, but she finds she is less adept at fending off the pilgrims who have set up a veritable tent city outside her hilltop home, convinced that she is Saint Garnet, healer of skin ailments and maker of miracles.

Her grandmother, the indelible Nonna Diamante, believes that Garnet’s mystical gift can be traced back to the family’s origins in the Nebrodi Mountains of Sicily, and now the Vatican has sent an emissary to Sweetwater to investigate. Garnet, wanting nothing more than to debunk this “gift” and send these desperate souls packing, reaches back into her family’s tangled past and unspools for the Church a tale of love triangles on the shores of the Messina Strait; a sad, beautiful maiden’s gilded-cage childhood in blueblood Virginia; and the angelic, doomed boy Garnet could not protect.

Saint or not, Garnet learns that the line between reality and myth is always blurred, and that the aspects of ourselves we are most ashamed of can prove to be the source of our greatest strength, and even our salvation.

About the author
Marie Manilla

MARIE MANILLA is a graduate of the Iowa Writers’ Workshop, and her fiction has appeared in the Chicago Tribune, Prairie Schooner, and Mississippi Review, among other journals.

I’ve just ordered room service, and though I am exhausted I must commit to paper a sketch of my initial encounter with Garnet Ferrari, the subject of the committee’s current investigation.

I was greeted at Garnet’s door by her aunt Betty, a flustered soul, all chatter and tics, who genuflected deeply and kissed my hand before I could stop her. She deposited me in the library, where Garnet was standing before the lit fireplace, fists clenched as if she were a pugilist in the ring. She was dressed in track shorts and an orange tank top just a shade off from the color of her hair — a voluminous mane that roams at will. Most of her skin was exposed for my benefit, I believe, as if to say: Take a good look!

The background tone of her flesh is pale, but the birthmarks decorating her skin are varying shades of purple: deep mulberry, magenta, the faintest mauve. It looks as if someone took a map of the world, cut out continents and islands, provinces and cantons, and glued them willy-nilly on Garnet’s body. I distinctly identified Alaska on her right cheek, the Aleutians trailing over her nose; Mongolia on one shoulder; Zaire on the other; Crete on her knee; Chile on her ankle; and many others. There is a kind of beauty in her birthmarks, God’s holy design imprinted on her skin.

Garnet directed me to sit as her Sicilian grandmother pushed in a teacart loaded with cookies and a samovar of coffee. Nonna Diamante is quintessentially Old World with her white bun and orthopedic shoes. When she saw me she began to kneel and reach for my hand, but I forestalled the gesture. Nonna backed out of the room mumbling, “Garney, watch-a you mouth and behave.”

Once we were alone Garnet broadened her shoulders, thrust forward her chest, and jutted out her chin. The display reminded me of that toad in my sister’s garden that doubles its size by inflating with air to deter predators.

Finally Garnet sat, draped her legs over her chair arm, and said, “You know I don’t believe any of this bullshit.”

Given the resistance — and mockery — the committee has been met with thus far, I was prepared. “Perhaps you don’t, but people all over the world do.” I pulled from my briefcase a sampling of the many letters the Vatican has received from people claiming to have been healed by Garnet.

“Don’t these people have anything better to do?” She sat upright, grabbed the letters, and unceremoniously flung them into the fireplace.

I stifled my impulse to rescue them, fearing that any sudden movement might send Garnet running.

I then pulled out a stack of before-and-after pictures of various healed skin disorders. I fanned them out for her perusal, careful to hold on tight. “Are you saying these are fabricated?”

Garnet looked at the photos and sighed. “I’m not denying that people are being healed. I’m just saying that I’m not responsible.”

A sudden roar erupted from the pilgrims keeping vigil outside Garnet’s home. Garnet’s head bowed under the magnitude of their pleas. When she looked up, her eyes betrayed weariness. “How do I put an end to this crap so I can get on with my life?”

It felt as if we were in a confessional, and I wished I had an inspired answer. All I could do was hand over the standard questionnaire and a tape recorder for her use during our inquiry. “Start here.”

Garnet flipped through the onerous document. “Are you kidding me?”

“The Vatican has a duty to investigate, I’m afraid. And we are very thorough.”

For a moment it looked as if the girl might cry, an astonishing notion that made me want to scoop her into my arms and hug her, as a father might. But that would have been inappropriate, and perhaps misconstrued. “The sooner you begin, the sooner it will be over with.”

Garnet nodded, stood, and led me to the front door, the weight of the world heavy upon her neck.

After meeting Garnet I find myself of two minds. Half of me wants to prove that Garnet is the source of the miracles whether she claims responsibility or not. The other half wants to refute the pilgrims’ assertions so that she can live in peace. It is up to God to reveal the truth.

Ah! My veal scaloppine has arrived.

The Legend of Saint Garnet

To the Congregation for the Causes of Saints, Archbishop Gormley in particular:

Before we begin, Archie, I want to reiterate that the only reason I’ve granted this intrusion is that the sooner you dispel this sainted nonsense the sooner I can reclaim my life, or perhaps claim it for the first time. Then you and the boys can direct your energies to more urgent matters: rescuing victims of the Banqiao Dam breach, for example, or polishing the papal jewels.

Wait. There’s Nonna at the door.

Archie, Nonna wants me to thank you for the visit; a preemptive nicety, since I can hear her spitting even from here with the ptt-ptt-ptt and tocca ferro, touching iron, jangling the five pounds of skeleton keys she routinely hauls around — as do I. She’s using them to ward off the evil-eye germs she’s certain you left in the upholstery. According to Nonna, anyone with eyes as dark as yours surely harbors the malocchio, as they call it in Italy, or the maloicky, as they say in Baaston, your holy turf. Nonna wondered about that, sending a Black Irish potato eater instead of a paesano to do the pope’s bidding.

I apologize for her ethnic fussiness, but she’s mistrustful of murky eyes even if they’re ordained, since everyone knows Pius IX was a bad-karma-flinging jettatura, even if it was inadvertent. Tell that to the poor schmucks who fell out of windows or tumbled off scaffolding in his papal wake. After you left, Nonna was a whirling dervish of incantations and phallic hand gestures — manus obscenus: mano fica, mano cornuta — though I insisted she stop at sprinkling urine, that holiest of all holy waters, particularly mine, which is why I lock the bathroom door behind me even after I flush.

If it will speed your inquiry I will confess that there is magic here, and I don’t mean just the practical jokes playing out on my body. Someone or something is responsible for the mysteries I’ve witnessed in Sweetwater, but it’s not me. In addition to environmental factors, in my opinion, the true source is Nonna —

(It’s-a no true! You are the descendant of Saint Garnet! You!)

— It was Nonna who packed anti-malocchio talismans in her valise when she sailed to America, along with her belief in folk magic — the Old Religion — a faith system, however irrational, that I have been unable to banish from my psyche the way I have the Vatican-sanctioned one.

Admittedly, if it is Nonna, her powers are spotty, so perhaps there’s a

"I have read 2014’s Best Novel and it is The Patron Saint of Ugly. Created, crafted and chronicled by the magnificent Marie Manilla, this written work of art will capture your mind, tug your heart-strings and enrich your very essence."

"The Patron Saint of  Ugly  draws us deep into a world of everyday miracles, where grandmothers can transform themselves into nereids and granddaughters can heal the wounds of their family’s tangled past. This book is a divinely feminist celebration of the sacred synergy that exists between women."

"Beautifully written, filled with detailed prose meant to be savored, Manilla’s latest is a captivating reminder of the blurred line between myth and reality."

"A cleareyed, touching fable of a girl learning the hard truths about herself and others."

"Manilla’s second novel is clever, funny, heartbreaking, and heartwarming, all at once. . . A lovely, hopeful tale."

“A rich and complex novel…[that] lures the reader into a world where magic and serendipitous fortune hold hands with sadness, guilt, and family tragedy…There is not a scene rendered that is pale or slim on visual imagery. Each place and talisman is depicted with a vivid sense of color and emotion.”--Michaela Hansen, Front Porch Journal

"Marie Manilla’s novel is a boisterous dazzler, thick with humor and steeped in a rich mythology. The Patron Saint of Ugly packs a hard emotional punch without ever losing its charm or its hopeful heart."

—Joshilyn Jackson, bestselling author of Someone Else’s Love Story and Gods in Alabama

"The Patron Saint of Ugly is a vastly entertaining story of a reluctant saint, her indelible nonna, and their family's long history of love, trickery and transcendence. I can't imagine any reader not enjoying Manilla's sparkling tale, or the girl who tells it."

—Whitney Otto, author of How to Make an American Quilt

"With The Patron Saint of Ugly, Marie Manilla has written more than a novel: she's written what we used to call a tale. It's all here, folks, the whole world. How does Manilla write about God and history and love and loss and make it all so miraculously readable? How does she make this book so much fun, even as it breaks your heart? Beats me, but she did it. Plus which, anyone who can mention Buddy Holly and Pius XII in the same sentence is my hero."

"The Patron Saint of Ugly is steeped in magic — it will make you laugh, fill you with wonder and break your heart all at once. A rich and energetic tale of love, family, and the hazy lines between reality and myth." 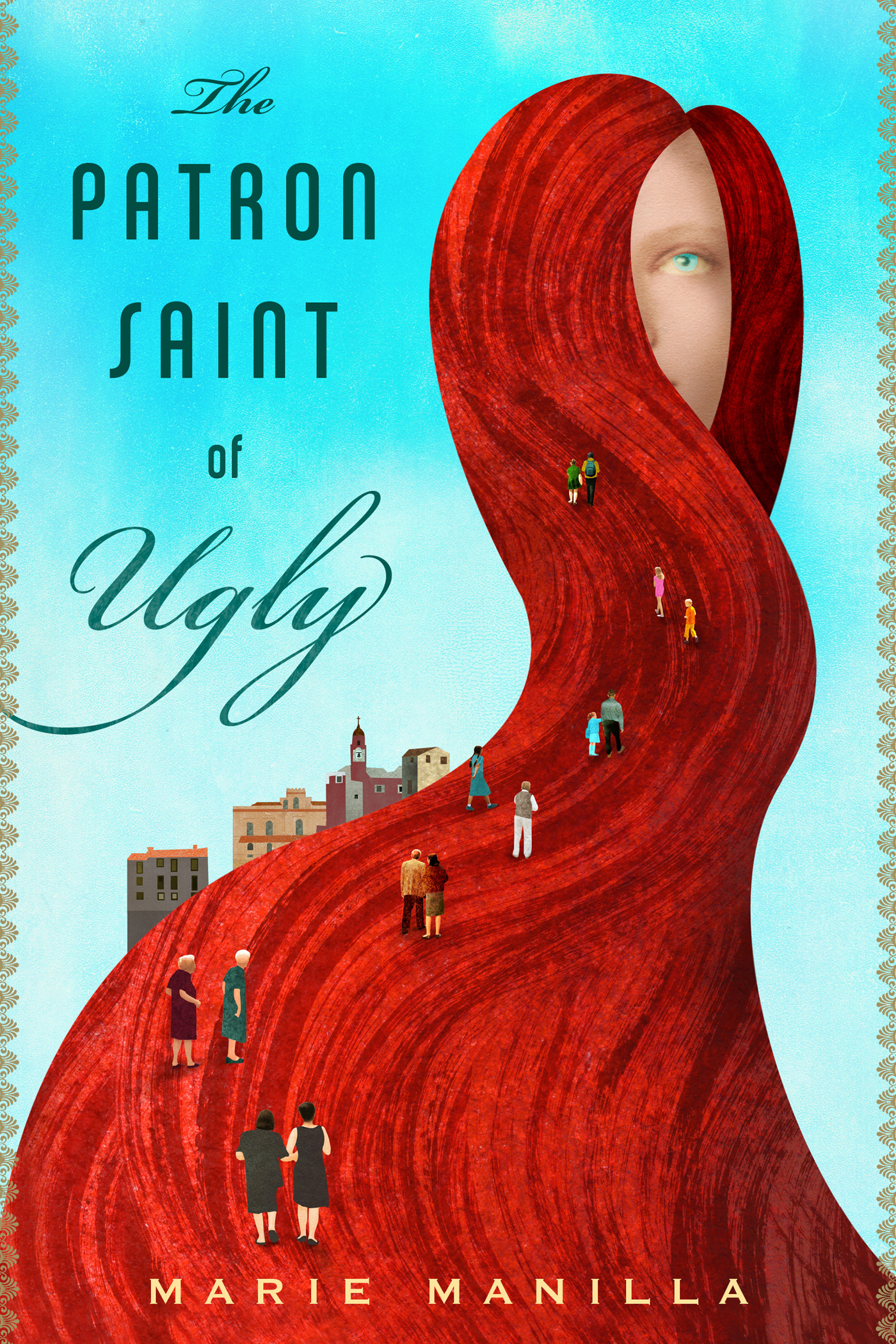