The Patron Saint of Liars

In 1992, celebrated novelist Ann Patchett launched her remarkable career with the publication of her debut novel, The Patron Saint of Liars, a best-selling book that is “beautifully written . . . a first novel that second- and third-time novelists would envy for its grace, insight, and compassion” (Boston Herald).

St. Elizabeth’s, a home for unwed mothers in Habit, Kentucky, usually harbors its residents for only a little while. Not so Rose Clinton, a beautiful, mysterious woman who comes to the home pregnant but not unwed, and stays. She plans to give up her child, thinking she cannot be the mother it needs. But when Cecilia is born, Rose makes a place for herself and her daughter amid St. Elizabeth’s extended family of nuns and an ever-changing collection of pregnant teenage girls. Rose’s past won’t be kept away, though, even by St. Elizabeth’s; she cannot remain untouched by what she has left behind, even as she cannot change who she has become in the leaving.

About the author
Ann Patchett

ANN PATCHETT is the author of seven novels: The Patron Saint of Liars, Taft, The Magician's Assistant, Bel Canto, Run, State of Wonder, and Commonwealth. She was the editor of The Best American Short Stories 2006, and has written three books of nonfiction–Truth & Beauty, about her friendship with the writer Lucy Grealy, What Now? an expansion of her graduation address at Sarah Lawrence College, and This is the Story of a Happy Marriage, a collection of essays examining the theme of commitment.

Two o’clock in the morning, a Thursday morning, the

back pasture in Habit, Kentucky, and not a living soul saw

up through the ground once it was ready. There are rivers, hundreds

of them, running underground all the time, and because of

this a man can say he is walking on water. This was a hot spring

that had broken loose of its river to make mud in the grass, and it

kept on till it was a clear pool and then a little creek, cutting out

a snake’s path toward the Panther River. Water will always seek

George Clatterbuck found it when it was already a pretty

steady stream. It was only fitting that he should be the one, seeing

family’s dinner. He smelled the spring before he saw it, foul and

sulfurous as spoiled eggs. He thought it was a bad sign, that it

meant his land was infected and spitting up bile for relief. The

water was warm when he dipped in his hand, and he wiped it off

against the leg of his trousers. He was thinking about it, thinking

what he ought to do, when he saw a rabbit on the other

side of the field. It was as big a buck as he’d seen, and he knelt

down slowly to get off his shot. He had to shoot on his knees.

kick would knock the boy off his feet, thought George would

be safer close to the ground. But since that was the way George

learned, that was the only way he could ever do it, and now here

he was, grown with a family, going down on his knees like a man

in prayer to shoot a rabbit.

He blew the head clean off and didn’t disturb the pelt. He

thought he would tan the hide and give it to his daughter, June,

for her birthday. June, like many little girls, was partial to soft

things. By the time he’d tied the legs onto his belt he’d forgotten

about the water altogether.

It wasn’t long after that times turned hard for the Clatterbucks.

Both plow horses came down with colic, and Betsy, the

horse George rode to town, got a ringworm thick as your thumb

that no amount of gentian violet could clear. Not a week after,

all drier than bones. George had to get up every three hours in

the night and bottle-feed the calves, whose crying put his wife

beside herself. “Sounds like a dying child,” she said, and she shivered.

George didn’t say this to her, but he was thinking he might

have to slaughter the calves and take his losses. Bought milk was

more than he could afford.

Then, if he didn’t have enough to worry about, the horses

broke free of the corral. George took some rope and set out to

bring them back, cursing the rain and the mud and the stupid

animals with every step. He found them at that spring he had

forgotten, drinking so deeply he thought they’d founder. He

was frightened then because he thought such water would kill

them, and where would the money come from to buy three new

horses? But the horses were fine. Betsy’s hide was smooth where

disorder. George knew it was the spring that had done this, but

he didn’t know if it was the work of the Devil or the Lord. He

didn’t tell a soul when he drove his sick cows down to the water,

Then little June took sick and laid in her bed like a dull penny.

fever, but something else that was burning her alive. She was

your eyes, and there sat her parents, not a thing in the world

jar. He walks in the dark to the spring, fills up the jar, and heads

home. He goes to his daughter’s room and looks at her pale face.

He prays. He takes the first drink of water for himself, thinking

that if it was to kill her he’d best die, too. It is foul-tasting, worse

even than the smell of it. He lifts up June’s head from her sweaty

pillow and pours the water down her throat, the whole jarful. He

only lets a little run down the sides of her face. He wonders for a

as his wife had done, but the thought embarrasses him and he

lets it go. The next morning June is fine, perfect, better than new.

When the spring had saved his livestock, George kept it to

himself, not wanting to look foolish, but when it saved his

daughter he felt the call to witness. He went into the streets of

Habit and told what he had seen. At first the people were slow

in believing, but as hardships came to them and they went to the

spring for help, all was proved true.

long people were coming up from as far away as Mississippi.

The truth was stretched out of shape through all the telling, and

to see. The spring can’t do everything, the townspeople said. It’s

wrong to expect so much.

And then one boy died right there at the water’s edge. He was

that sick by the time his folks brought him. He’s buried in Habit

now, two hundred miles away from his own kind.

wife, Louisa, had rheumatoid arthritis and her hands froze up on

her even though she was only twenty-two. They set off to Habit

to see if the water couldn’t do her some good. The Nelsons were

rich, and when they came to town they were looking for a hotel,

but there wasn’t one. George had made a vow to never make a

cent off the spring, and Habit said that was only fitting. So when

visitors came they were taken in with charity, many times by the

Clatterbucks themselves. This put the Nelsons ill at ease, since

they were used to giving charity and not receiving it.

June was seventeen that summer. She had grown up as well as

she had started out. She was a kind of a saint in the town, the first

one saved by the spring, but all that really meant to June was that

there were few boys bold enough to ask her out, and the ones

who did thought it would be a sin to try and kiss her. She gave up

her room for Mr. and Mrs. Nelson and slept on the sofa downstairs.

came back to her and she taught June how to cross-stitch. Her

husband was full of joy. Lewis was a devout Catholic with a head

for figures. He saw the hand of God in the spring and thought

the thing to do would be to build a grand hotel in the back pasture.

No one was ever sure how he changed George Clatterbuck’s

mind, but probably it was by telling him that a lot more people

was being unchristian by denying them. It’s easy to imagine that

and Tennessee and knew there was some real money to

be made. Not long after that the architects came with their silver

mechanical pencils, and after them the builders and the gardeners.

"A lovely, evocative tale about a beautiful mother, her abandoned daughter, the love-struck men who are devoted to them both-- and the living saint who watches over them all. Maybe the Patron Saint of Liars really is a sign from God." —Carolyn See

"Beautifully written . . . Ann Patchett has produced a first novel that second- and third-time novelists would envy for its grace, insight, and compassion." —Boston Herald

"A wonderful novel. A-" —Entertainment Weekly 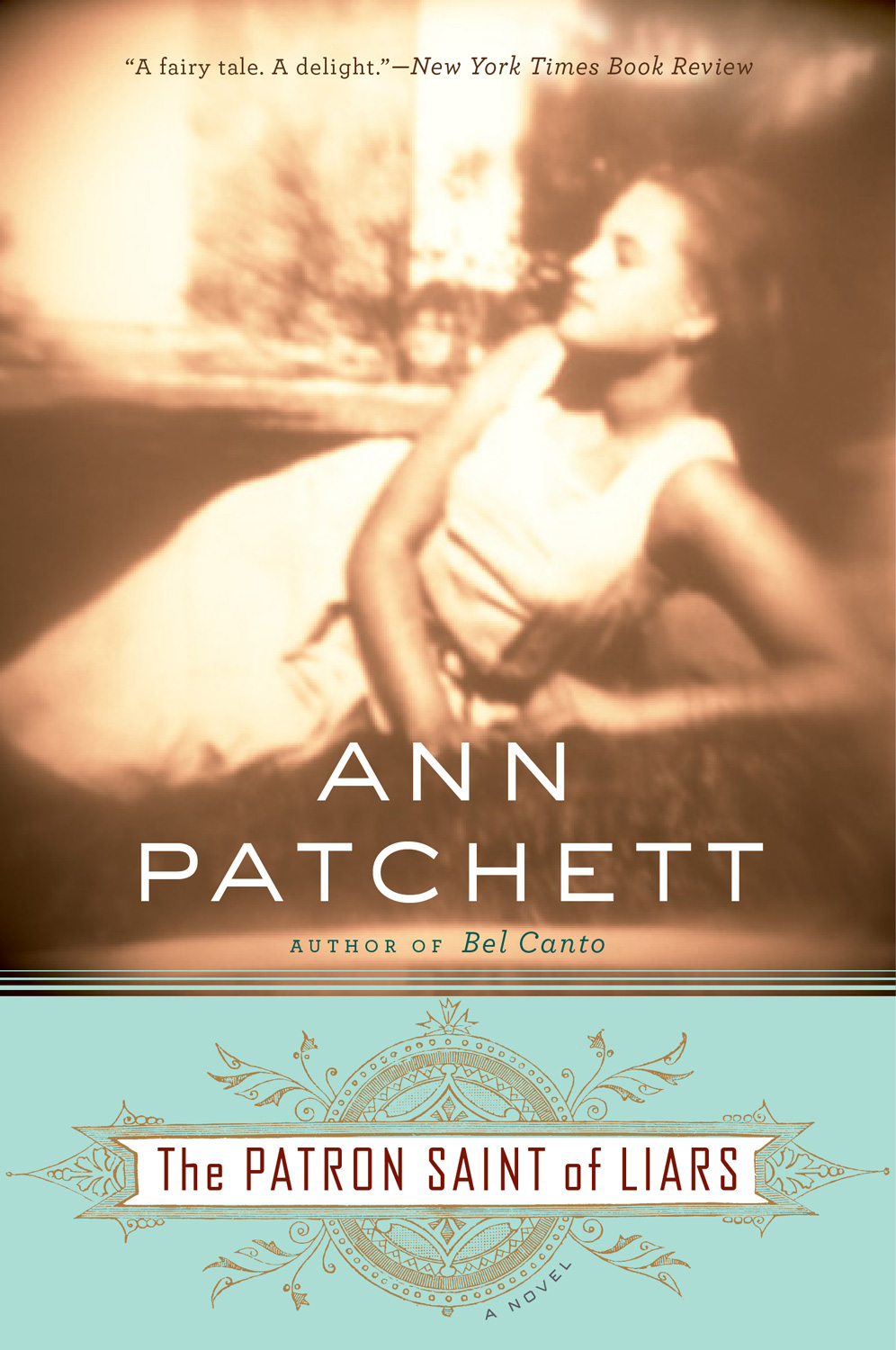