The sorcerer Alder fears sleep. The dead are pulling him to them at night. Through him they may free themselves and invade Earthsea. Alder seeks advice from Ged, once Archmage. Ged tells him to go to Tenar, Tehanu, and the young king at Havnor. They are joined by amber-eyed Irian, a fierce dragon able to assume the shape of a woman. The threat can be confronted only in the Immanent Grove on Roke, the holiest place in the world and there the king, hero, sage, wizard, and dragon make a last stand.

In this final book of the Earthsea Cycle, Le Guin combines her magical fantasy with a profoundly human, earthly, humble touch.

URSULA K. LE GUIN was born in Berkeley, California, in 1929, and passed away in Portland, Oregon, in 2018. She published over sixty books of fiction, nonfiction, poetry, drama, children's literature, and translation. She was the recipient of a National Book Award, six Hugo and five Nebula awards, and was inducted into the American Academy of Arts and Letters.

Sails long and white as swan's wings carried the ship Farflyer through summer air down the bay from the Armed Cliffs toward Gont Port. She glided into the still water landward of the jetty, so sure and graceful a creature of the wind that a couple of townsmen fishing off the old quay cheered her in, waving to the crewmen and the one passenger standing in the prow.

He was a thin man with a thin pack and an old black cloak, probably a sorcerer or small tradesman, nobody important. The two fishermen watched the bustle on the dock and the ship's deck as she made ready to unload her cargo, and only glanced at the passenger with a bit of curiosity when as he left the ship one of the sailors made a gesture behind his back, thumb and first and last finger of the left hand all pointed at him: May you never come back!

He hesitated on the pier, shouldered his pack, and set off into the streets of Gont Port. They were busy streets, and he got at once into the Fish Market, abrawl with hawkers and hagglers, paving stones glittering with fish scales and brine. If he had a way, he soon lost it among the carts and stalls and crowds and the cold stares of dead fish.

A tall old woman turned from the stall where she had been insulting the freshness of the herring and the veracity of the fishwife. Seeing her glaring at him, the stranger said unwisely, "Would you have the kindness to tell me the way I should go for Re Albi?"

"Why, go drown yourself in pig slop for a start," said the tall woman and strode off, leaving the stranger wilted and dismayed. But the fishwife, seeing a chance to seize the high moral ground, blared out, "Re Albi is it? Re Albi you want, man? Speak up then! The Old Mage's house, that would be what you'd want at Re Albi. Yes it would. So you go out by the corner there, and up Elvers Lane there, see, till you reach the tower..."

Once he was out of the market, broad streets led him uphill and past the massive watchtower to a town gate. Two stone dragons large as life guarded it, teeth the length of his forearm, stone eyes glaring blindly out over the town and the bay. A lounging guard told him just turn left at the top of the road and he'd be in Re Albi. "And keep on through the village for the Old Mage's house," the guard said.

So he went trudging up the road, which was pretty steep, looking up as he went to the steeper slopes and far peak of Gont Mountain that overhung its island like a cloud.

It was a long road and a hot day. He soon had his black cloak off and went on bareheaded in his shirtsleeves, but he had not thought to find water or buy food in the town, or had been too shy to, maybe, for he was not a man familiar with cities or at ease with strangers.

After several long miles he caught up to a cart which he had seen far up the dusty way for a long time as a dark blot in a white blot of dust. It creaked and screaked along at the pace of a pair of small oxen that looked as old, wrinkled, and unhopeful as tortoises. He greeted the carter, who resembled the oxen. The carter said nothing, but blinked.

"Might there be a spring of water up the road?" the stranger asked.

The carter slowly shook his head. After a long time he said, "No." A while later he said, "There ain't."

They all plodded along. Discouraged, the stranger found it hard to go any faster than the oxen, about a mile an hour, maybe.

He became aware that the carter was wordlessly reaching something out to him: a big clay jug wrapped round with wicker. He took it, and finding it very heavy, drank his fill of the water, leaving it scarcely lighter when he passed it back with his thanks.

"Climb on," said the carter after a while.

The wheels creaked. The oxen heaved deep sighs, first one, then the other. Their dusty hides smelled sweet in the hot sunlight.

"I'd better walk on, then," said the stranger.

Refreshed by the water, he was able to get ahead of the oxen, and they and the cart and the carter were a good way behind him when he heard the carter speak again. "Going to the Old Mage's house," he said. If it was a question, it seemed to need no answer. The traveler walked on.

When he started up the road it had still lain in the vast shadow of the mountain, but when he turned left to the little village he took to be Re Albi, the sun was blazing in the western sky and under it the sea lay white as steel.

There were scattered small houses, a small dusty square, a fountain with one thin stream of water falling. He made for that, drank from his hands again and again, put his head under the stream, rubbed cool water through his hair and let it run down his arms, and sat for a while on the stone rim of the fountain, observed in attentive silence by two dirty little boys and a dirty little girl.

Copyright © 2001 by Ursula K. Le Guin, published by Harcourt, Inc. All rights reserved. For permission to reproduce this information, go to our Permissions and Copyright Requests page at http://www.harcourtbooks.com/pol-copyright.html.

"The magic of Earthsea is primal; the lessons of Earthsea remain as potent, as wise, and as necessary as anyone could dream."--Neil Gaiman, author of The Sandman

"New and longtime Earthsea fans will be drawn to these impressive new editions."—Horn Book
We’re sorry 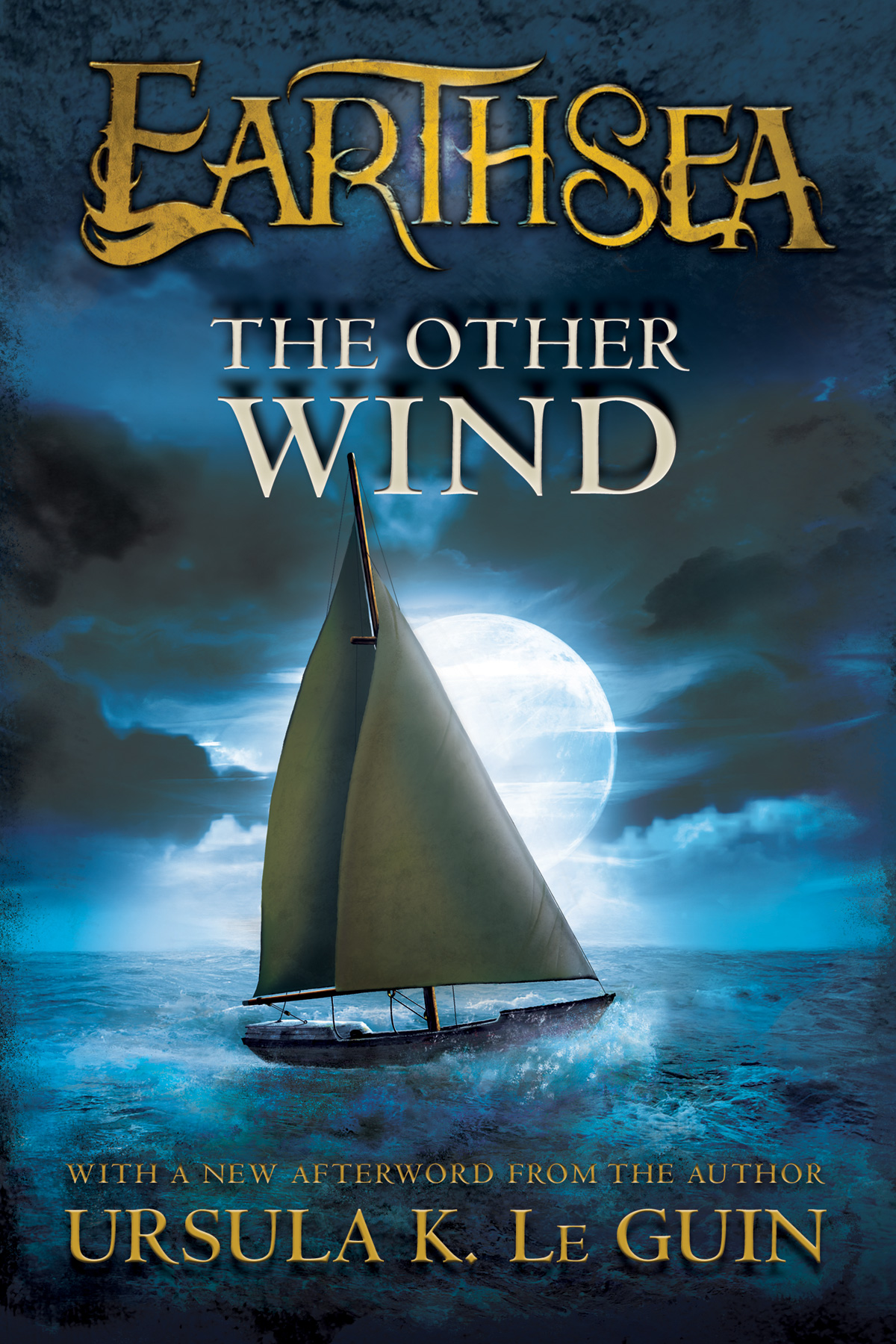