Gordie Hatch is twenty-two, charmingly naive, and certain that his first job as a writer for the ST LOUIS INDEPENDENT'S obituary page will be a stepping stone to a crackerjack career in journalism. The year is 1989, and Gordie watches helplessly while dramatic events -- the very events that could be his lucky break -- unfold in the world around him. But nothing can prepare him for the call he gets from Alicia Whiting, a young widow with an accent he can't quite place. When Gordie agrees to meet Alicia, against his better judgment, his journalistic curiosity quickly turns into an obsessive search for the outrageous truth behind the Whiting family. Shot through with affectionate humor and surprising twists and turns, THE OBITUARY WRITER introduces an author of enormous talent and heart. Porter Shreve brings a deft touch to the moments that mark a young person's entrance into the world, and a sharp eye to the ways in which the lead story can be wonderfully, seductively misleading.

Gordie Hatch is twenty-two, charmingly naive, and certain that his first job as a writer for the ST LOUIS INDEPENDENT'S obituary page will be a stepping stone to a crackerjack career in journalism. The year is 1989, and Gordie watches helplessly while dramatic events -- the very events that could be his lucky break -- unfold in the world around him. But nothing can prepare him for the call he gets from Alicia Whiting, a young widow with an accent he can't quite place. When Gordie agrees to meet Alicia, against his better judgment, his journalistic curiosity quickly turns into an obsessive search for the outrageous truth behind the Whiting family. Shot through with affectionate humor and surprising twists and turns, THE OBITUARY WRITER introduces an author of enormous talent and heart. Porter Shreve brings a deft touch to the moments that mark a young person's entrance into the world, and a sharp eye to the ways in which the lead story can be wonderfully, seductively misleading.

About the author
Porter Shreve

PORTER SHREVE was born during the Lyndon Johnson administration, and grew up in Washington, D.C. In the 1970s his family started an alternative school called Our House Is a Very, Very, Very Fine House, and some of When the White House Was Ours is loosely based on that experience. Shreve's first novel, The Obituary Writer, was a New York Times Notable Book, and his second, Drives Like a Dream, was a Chicago Tribune Book of the Year.

1 My father, who died when I was five, had a reputation as a great newspaperman. I never doubted that I could be one too. "It's a matter of destiny," my mother would say to me with her usual drama. I believed her, and that's where my trouble began.

I was eight when I took my first paper route - three hundred houses with the Columbia Pioneer at ninety-five dollars a week. That first winter, my mother delivered the papers with me. She woke me at five in the morning dressed in a scarf, sweatshirt and jogging pants, white moon boots, and her old camel-hair coat, and we went out into darkness to the corner of Stadium and La Grange to pick up the bundles. On certain days the distributors would leave inserts - the home section on Tuesdays, real estate on Fridays, comics, coupons, classifieds, and Parade for the Sunday paper - and my mother and I would sit on the cold floor of the garage putting inserts and headsheets together, folding the papers in thirds, slipping them into plastic sleeves.

When we had folded and bagged all three hundred papers, my mother popped the hatchback of what was then her brand-new 1975 AMC Gremlin, brown with a white racing stripe. We stacked the papers in the back of the car, then sat in the front, waiting in silence as the Gremlin warmed up. This was the best time of the day. The silence, the murkiness of first light, the warm air from the heater closing around us.

By the time I was twelve, I was collecting newspapers. I'd save one a day from my morning route, and my mother, Lorraine, who was a secretary at the University of Missouri Journalism School, would bring home thumbed-through discards from the school library. I kept a handwritten log of what stories I deemed important, by date and subject, from the New York Times, Chicago Tribune, and Dallas Morning News. The papers piled up in labeled stacks in the garage, until eventually I had so many that my mother had to park her car in the driveway. This must have been an inconvenience, since we had limited space, but she wasn't about to let an AMC Gremlin, which smelled of engine oil when you turned on the heat, roll over my dreams.

I grew up with a heightened sense of my own importance, which my mother encouraged. She figured an only child with a single parent ought to be treated as exceptional. "Great men like your father come along only rarely," she liked to say, beginning an exhortation I'd hear many times throughout my youth, often following the arrival of more bad news from school.

I'd come home from basketball, a skinny sixteen, and she'd be standing by the microwave lining Triscuits onto a plate, slicing cheese to melt on top. I'd go to the refrigerator for a soda and see my final grades taped to the door.

"Some who are born great fall through the cracks," she'd say, waving the knife in a backhand motion, narrowing her wide-set eyes on me. "Maybe they end up homeless. Maybe dead. Maybe they go crazy. Who knows? If you're born great, the rule is: you soar to the sun or you sink to the silt." Pale and narrow, the bones in her downturned face just beneath her skin, my mother would often strike me as youth standing at the boundary of old age. I'd watch her turn in the crinkly black dress that sharpened her features and darkened her eyes and wonder if men in town found her pretty. She'd walk to the stove, rigid and deliberate, and roll a cigarette in the flame.

"Einstein flunked math when he was your age, but he got his act together and they gave him the Nobel Prize." She'd take a couple of nervous puffs, lighting her cigarette unevenly. "These grades are unacceptable, Gordie, but let me say this: you have the substance of greatness."

Even on my mother's salary, we could have afforded a better place, something I never tired of bringing up. We had lived in the same Sears, Roebuck house at 102 La Grange since I was five, always with boarding students stomping above us. Our half of the house had low ceilings and little light, and though it was kept clean, nothing had changed in years. The living room was small, with a lumpy yellow sofa, shag carpet, a near-empty curio cabinet, and a fallapart rocking chair that I was forever salvaging with Super Glue. We ate in the kitchen at a Formica dinette under cheerful aphorisms that my mother would copy out of magazines and hang on the walls.

My room had always looked the same, even later when I came home to visit, as it did when I was a boy: the comforter on the bed printed with old headlines: titanic sinks, sacco and vanzetti guilty, lindbergh baby kidnapped; the basketball trophy for best playmaker in summer camp atop my writing desk; the same photographs on the walls: my father, a ciigarette hanging from his lip, his eyes squinting from the smoke, in the newsroom; my mother on their wedding day in Norfolk, Virginia, leaning stiffly agaaaaainst a newel post in elbow- length gloves; Harry Truman, the pride of Missouri, with a big gray smile famously lofting the Chicago Tribune; and a picture of me and my father taken on Easter Sunday, 1972, eight weeks before he died.

I cherished this picture because I had an actual memory of the scene. The cloudless sky, the pale grass on an uncommonly warm spring day. My father, Charlie Hatch, thirty-six years old, sitting on the back stairs of my uncle's house in Wichita in a blue and white seersucker suit with a Panama hat brim-down over his head. I remember my mother chasing me with a camera while I ran around the yard making airplane noises, my arms outstretched. Out of the blue my uncle had snatched me up and whispered conspiratorially in my ear, "I'm going to zoom you at your daddy and you're going to take his hat." The photograph, a grainy black and white, captures the scene a minute later. My father, hatless, his back to the camera, bends above me, looking over his shoulder. I'm sitting upright on the lawn in a white shirt. The Panama hat rests hugely over my head.

My mother and I were for the most part alone. She did sometimes have company over, small potlucks with friends from the office, but usually we had the evenings to ourselves. I'd organize my newspapers in the garage or write long editorials at my desk for no one's eyes but mine, while my mother played her light operas too loud on the RCA Victor my father had given her. She had a singular passion for Gilbert and Sullivan and knew every word to The Gondoliers, Princess Ida, and The Pirates of Penzance. She'd twirl around the room or hum along as she read Cosmopolitan in the fall-apart rocking chair.

My mother kept no photographs of my father in the living room. What mementos she did have were locked away in her bedroom, down the dark hallway from mine. The few times I went in there as a child, I felt an immediate urge to turn back. Her small room had no carpeting, and the creak in the wood, the shock of the cold floor on my bare feet, gave me a feeling of emptiness.

The double bed was always made, with a brown chenille spread pulled taut over the single pillow and tucked in all around like a private's bunk. Hanging above it, in a thick wooden frame, was a needlepoint sampler of flowers and vines surrounding the words grow where you are planted.

Against one wall was a heavy walnut dresser; atop it, neatly arranged in saucers, lay pennies and nickels and Viceroy cigarettes. In the far corner sat an old rolltop desk, always locked, where I assumed my father's things were saved: his wallet, his press pass, his obituary from the major papers, all the photographs, many with important people, letters and keepsakes from his life with my mother, clips from his short but dazzling career.

My father's first job out of the Navy was on the city desk at the Wichita Kansan. Back in the early sixties a midrange paper sent out maybe ...

"This novel is a delightful read; the kind of book one simply wants to nestle into. There are constant quirky surprises, as well as a great plot, and so the reader is propelled forward quite willingly through the book's own special world." --Elizabeth Strout, author of AMY AND ISABELLE 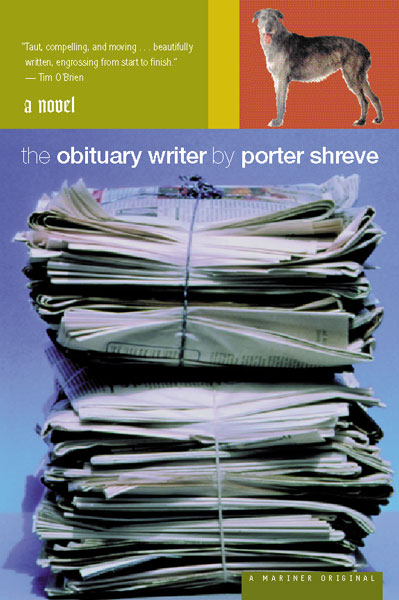