The Mysterious Woods of Whistle Root

by Christopher Pennell and Rebecca Bond
$8.99

A book much like the mysterious, inviting woods it describes. Step in to find friendship, magic, and surprises.

A little girl who can only sleep during the day grows from something of an isolated town oddity to the heiress of an ancient legacy of magic and music.

Exquisitely illustrated, this gentle, satisfying young fantasy is filled with unforgettable, quirky characters  and imagery. A perfect read-aloud, it shows how one can find friends in the unlikeliest of places—windowsills, rabbit burrows, the library.

Debut author Christopher Pennell casts a spell with his irresistible adventure while illustrator Rebecca Bond's pen-and-ink drawings perfectly capture this atmospheric world and contribute to the feel of a timeless classic. Step into the mysterious woods of Whistle Root and feel the magic.

About the author
Christopher Pennell

CHRISTOPHER PENNELL studied briefly at Yale but graduated from the University of Texas at Austin with degrees in German and Psychology. The Mysterious Woods of Whistle Root was his first novel, which he began writing after he and his wife moved into a house with a small woods behind it and their daughter was born.

REBECCA BOND grew up in the tiny village of Peacham in northeastern Vermont. When she is not having fun painting and writing, Rebecca is busy fixing up her new (to her) old house in a neighborhood in Jamaica Plain, Boston.

In a small town called Whistle Root, rats play music in the moonlight. They play on the very rooftops there. You can hear them if you listen closely in the middle of the night when there’s a slight breeze blowing. Who knows why they like breezes, but they do. And moonlight. You’ll never hear a rat playing music without moonlight.

The music can be scary. It sounds as if someone left a radio playing in the closet. But if you’re brave enough to look in the closet, you won’t find anything. And if you’re even braver and look out your window, the music will stop completely.

All of which leads me to the story of a girl named Carly who looked out the window of her upstairs room one night and saw a squash sitting on the roof.

Now, vegetables had been appearing on roofs all over Whistle Root for several weeks that summer. So when Carly looked out her window and saw the squash sitting there, it wasn’t a complete surprise.

Still, it’s odd seeing vegetables on the roof. We expect to see them in the garden or on our dinner plates. We don’t expect to look out our windows and see them staring back at us.

But Carly felt more curious than scared. She opened her window and waited to see if anything else would appear. She waited for the music to start again too, which had caused her to look out the window in the first place.

But there was just the moonlight and the squash and a slight breeze blowing.

“I notice that you have a squash on your roof, dear,” said one of her older neighbors, walking by late one evening. “How lovely. I only have broccoli.”

Carly’s full name was Carly Bean Bitters. Her parents had named her partly after a great-great-grandmother named Magritta Bean, whom everybody had just called Gritty. Carly had to be thankful that she hadn’t ended up being named Gritty Bitters.

Carly was small for her age, which was eleven years old. Her hair was dark and her skin was pale. Strangely, she had never been able to sleep at night. She could only sleep during the day. It was a troublesome affliction, a contrary clock, and there was nothing she could do to change it.

“She hasn’t got an ailment . . . she’s just an oddity,” Carly had overheard her doctor say once, after none of the pills he had prescribed to make her sleep at night had worked.

Every night Carly stayed in her room, drinking hot tea and sitting in her chair by the little brick fireplace she felt so lucky to have. She read books, waiting for the sun to rise so that she could finally go to sleep and leave the lonely, wakeful hours behind.

She also dreamed of a life in the sunlight, outside of her little room that too often felt like a prison, despite its coziness.

But that was asking too much, she knew.

She would settle for a friend.

Carly watched the roof every night from her window; she wanted to see if whatever had left the squash would come back. But several days passed and the squash began to rot and attract flies. Birds picked at it and took pieces away to eat. And then the rain came and washed what was left of it off the roof.

But moonlight and summer breezes always return. And one day, there was a brand-new squash sitting in the exact same spot as the one that had recently rotted.

That night, Carly kept her window open and sat in a chair beside it, watching the roof again. She was startled when she heard someone ask, “Excuse me, can you play the horn?”

There on the windowsill was a rat holding a fiddle and a little red horn.

“You see, I can’t perform with just the squash,” said the rat. “And it would be a great embarrassment to have two vegetables in the band. I really shouldn’t ask you but the owls took poor Fenny last night.”

Carly didn’t know what to say, since she hadn’t understood what the rat was talking about. “Are you the one who put the squash on the roof?” she finally asked.

“Of course,” said the rat. “Fenny and I had to have someone to play the drum.”

“No, not really,” the rat replied with a sigh.

A breeze came in through the open window and moved the curtains gently. The light from a full moon cast a blue glow over Carly’s room.

“It’s such a good night for music,” said the rat. “We really shouldn’t waste it.”

“My name’s Lewis,” the rat told Carly, and handed the little red horn to her. “And this is Fenny’s horn. You’ll have to learn to play it, of course, but mainly you just blow into it and think sad or happy thoughts.”

They were standing on the roof and Carly held the horn, which was about as big as her little finger.

“How did you get the squash onto the roof?” she asked. “It’s bigger than you are.”

“It’s a simple matter of breezes,” explained Lewis. “We ride the breezes to the rooftops. And a breeze is certainly strong enough to carry a squash. Now remember, sad songs are slower than happy songs.” And with that advice, he began to play a sad song on his fiddle that made Carly think of the moon. She blew into the little red horn and thought sad thoughts and made sad music too. As she played she watched the moon, which was just above the treetops. She was frightened when she saw shadows fly across its face.

“What were those?” she asked.

“It’s the owls,” he said. “But it doesn’t look like they’re heading for our rooftop. We should be safe tonight.”

“Why did they take your friend Fenny?”

“To eat him, I suppose. And before that they took Walter. That’s why Fenny and I had to bring the squash here. A band has to have three members, you know. No more and no less. One for the fiddle, one for the horn, and one for the drum.”

“But the squash can’t play the drum,” said Carly.

“Oh, I know that,” said Lewis. “But he could always learn to play, couldn’t he? If he would just practice, I mean. He has at least a week before he begins to rot.”

Several nights passed and Lewis visited Carly on each one. He was a wonderful fiddler, and Carly loved listening to his music and learning to play the horn along with him. After so many years of sitting alone in her room, it felt as if a new world had appeared, right outside her window.

But it was a world of danger, too.

“That horn is very old,” Lewis said on the fourth night. “Please be careful with it.”

Carly picked up the little red horn. She had been startled by shadows flying near the house and had dropped it on the roof. “Why don’t we play in my room?” she asked as she looked around nervously. “We’d be much safer there.”

Lewis looked at Carly as if she had said something ridiculous. “We alwa...

"An enchanting, fast-paced fantasy in the vein of E. B. White."

"Charming black-and-white illustrations add to the overall effect of the story, which will remind readers of beloved works by Kate DiCamillo and E. B. White. . . . It's all rather old-fashioned and quite lovely." 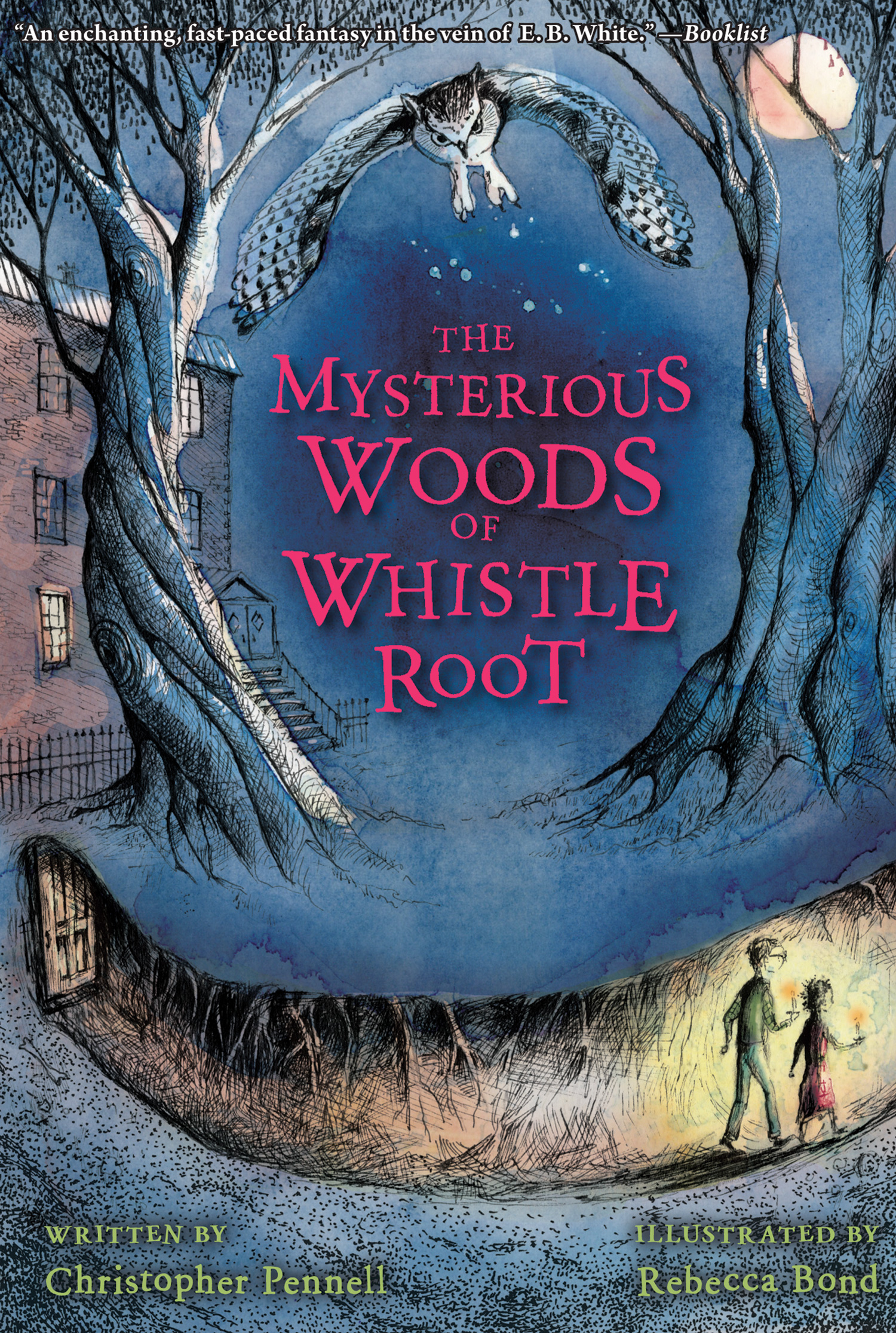