The May Queen Murders

Sixteen-year-old Ivy Templeton has lived her entire life in Rowan’s Glen, a remote farming commune in the Missouri Ozarks. She and her cousin Heather are closer than sisters and they share everything with each other—or so Ivy thinks. When Heather goes missing after a May Day celebration, Ivy discovers both her best friend and her community are as full of secrets as the woods that surround them.

Stay on the roads. Don’t enter the woods. Never go out at night.

Those are the rules in Rowan’s Glen, a remote farming community in the Missouri Ozarks where Ivy Templeton’s family has lived for centuries. It’s an old-fashioned way of life, full of superstition and traditions, and sixteen-year-old Ivy loves it. The other kids at school may think the Glen kids are weird, but Ivy doesn’t care—she has her cousin Heather as her best friend. The two girls share everything with each other—or so Ivy thinks. When Heather goes missing after a May Day celebration, Ivy discovers that both her best friend and her beloved hometown are as full of secrets as the woods that surround them.

About the author
Sarah Jude

SARAH JUDE lives by the woods and has an owl that lands on her chimney every night. She grew up believing you had to hold your breath when passing a graveyard. Now she writes about cemeteries, murder, and folklore. She resides in Missouri with her husband, three children, and two dogs. When she's not writing, she can be found volunteering at a stable for disabled riders. Visit her website at www.sarahjude.com.

Kerosene slopped from the rusty pail and splashed against the abandoned stable. Fumes burned my eyes but didn’t blur my father’s silhouette as he faced the building, bucket in hand. It would burn and, with it, the body inside.

Papa’s shoulders twisted as he wheeled back, shouting, sweeping the pail around. More kerosene rained against the wood while bile scorched my throat. I was too tired to get sick on the hay, my body wasted from screaming. I wiped my hand over my mouth and something snagged my lip. My fingernail was missing, a ragged root jutting from the bloody bed. Bitten off and swallowed by someone who wanted me dead.

Yet I smelled the kerosene and felt the spring air and the dust in my nose, my feet firm on the ground. No matter how my mind ached to fly away, it tethered to a stark truth. This was real.

“Ivy, stay back,” Papa warned, and then looked to Mama, close by with an antique lantern shedding dim light. The night sky swelled with clouds like spiders’ egg sacs ready to burst, but the storm would miss Rowan’s Glen. The hay, the ground, the stable were kindling-dry, and every movement kicked up brown clouds. Mama pulled me until we were safely away. The clink of her silver bracelets racked together as she eased her arm around my shoulder.

“Don’t worry.” Mama’s still-thick Mexican accent lilted her voice, but her expression was stoic except for a pinch around her eyes. That blankness scared me.

“This must be done,” she whispered.

I wadded my fingers into my long skirt. The blue patchwork was smeared with blood and dirt. Last summer, my cousin Heather and I sewed peasant skirts together. They flared when I spun, round and round, always with Heather.

The last time I saw Heather, she was wearing a skirt with red ruffles.

Papa trailed kerosene on the ground and retreated from the stable before tossing the pail inside. I couldn’t see into the shadows. The body lying on the stone floor might yet have a pulse. A shiver tugged at my neck, my chest rising and falling with shallow breaths. One clear thought pierced my mind’s muddle, and it sickened me.

I wanted that body to burn.

“Timothy.” Mama fished a book of matches from a pocket in her apron and gave them to Papa. He took the matches and stretched one hand to hold mine. He was strong. My throat ached when I swallowed, from being choked in an attempt to silence me. Now I said nothing as Papa struck the match.

The fire didn’t whoosh to life. First, the match hit the ground and breathed. Then a blue worm of flames emerged from the earth and devoured one blot of fuel before moving to the next. Upon reaching the stable, the worm bloated into a dragon that blazed yellow and orange. The wood planks hammered by my great-great-grandfather when he was young crackled, bone-dry from drought. Fire twisted through the stable while coils of smoke erupted from the windows. The pulse of the body inside thump-thumped in my head. Frantic. Dying.

Papa didn’t speak. Rage had made him do the unspeakable. For me, even though I’d survived. But also for those who hadn’t. Fire was cleansing. Fire was vengeance. The flames burned red, as red as the ruffles of Heather’s skirt. As red as Heather’s hair.

Now, Ivy girl, you gotta know there’s bad out in them woods, and the worst kind of bad Rowan’s Glen has ever known is Birch Markle. Things weren’t ever right with the Markle boy. There was no real reason for the things he done, but sometimes, well, evil’s like that.

Yet another LOST DOG sign marked the animal clinic’s window. This one stung. Mrs. Knightley had brought her beagle Jones in for a heartworm test only last week. I’d given him one of Aunt Rue’s dog biscuits, and Jones’s tail had wagged with glee. Now he was one more missing face. The curled papers blanketing the glass rustled against the April wind. Some had been there since January, when the dogs began disappearing. Papa wouldn’t take them down.

Glass shattered in an exam room, and I slid out from behind the counter. My sketch of Whimsy, my Morgan mare, would wait. Heather swept up remains from a broken jar and cotton balls. More glass crunched under her red Converse high-tops.

She pushed a tendril of hair from her forehead. “Uncle Timothy needs to buy some Plexiglas jars. I’d break a lot less.”

“Plexiglas is p-poison,” I replied.

Heather snorted. Papa’s diatribes on warfare against pesticides and plastics were common. Most Rowan’s Glen residents long ago decided that if we couldn’t raise, craft, or repurpose it, then we wouldn’t use it. Over time, the buildings converted from no electricity to solar energy. Our clothing was handmade, came secondhand from kin or the town thrift store if splurging.

Glen kind looked different from the rollers in the trailer park and the townies. We were hillfolk, with our boys in trousers and suspenders and girls clad in long skirts. Once a Missouri Ozarks outpost for Scottish travelers searching for permanency, Rowan’s Glen kept life simple and the outside world at bay.

It was my home.

The forever horizon of fields was dotted with horse pastures and goats. Comfort came in knowing your neighbors and them knowing not only you, but generations of your kin. It was a good place—even with the screams that sometimes came from the forest, the screams that had been there my whole life and longer.

The mention of Rook Meriweather fevered my cheeks. “You’re t-terrible.”

She drew a circle with her shoe in the broken glass, her smile taunting. “Don’t say you ain’t enjoying the subject. And what a subject Rook makes! I’ve seen your sketchbook.”

“Shouldn’t you clean up your mess?” I tried to smooth the bristle in my voice, but Heather only laughed.

“I’m kidding with you, Ivy. You know that, right?”

She took my hand and squeezed. Of course I knew.

The day had wound down, which meant stocking the delivery of Mama’s homeopathic flea powder would wait. There wouldn’t be enough time to...

* “Jude’s characters exude authenticity, and the suspense stays palpable through the final pages.”

"It will appeal to readers of traditional horror titles as well as the more casual fan looking for an exciting, creepy read. The macabre descriptions sprinkled throughout are haunting and edgy and will thrill readers who like to be spooked."

"A wayward girl and a monster in the woods make a familiar tale, but Jude gets it just right, portioning out the precise amount of gore, secrets, sex, and deception to make a thrillingly dark murder mystery with touches of horror and the supernatural."

“This present-day mystery is ripe with superstition and serves up an atmospheric, authentic-feeling setting.”

"This book weeps atmosphere. Rich, intense, and sporting a cast of characters you will fall in love with, it draws you into the sordid doings of Rowan’s Glen and doesn’t let you go.”

—Gretchen McNeil, author of Ten and the Don’t Get Mad series 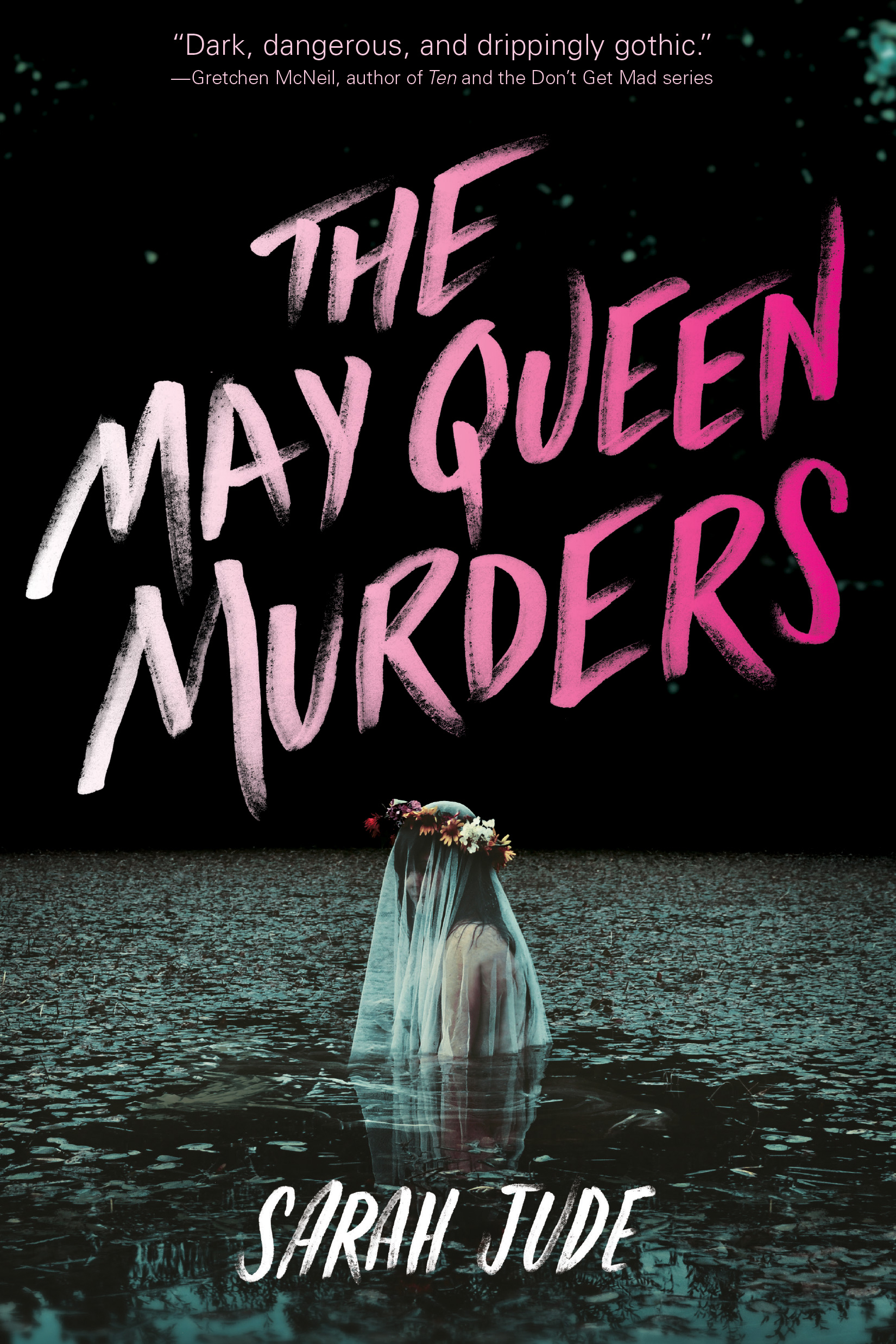