The Last of the Doughboys: The Forgotten Generation and Their Forgotten World War

by Richard Rubin
$16.99
For the past decade, Richard Rubin sought every last living American veteran of World War I—and uncovered a forgotten great generation, and their war.

“Richard Rubin has done something that will never be possible for anyone to do again. His interviews with the last American World War I veterans—who have all since died—bring to vivid life a cataclysm that changed our world forever but that remains curiously forgotten here.”—Adam Hochschild, author of To End All Wars: A Story of Loyalty and Rebellion, 1914–1918

In 2003, 85 years after the end of World War I, Richard Rubin set out to see if he could still find and talk to someone who had actually served in the American Expeditionary Forces during that colossal conflict. Ultimately, he found dozens, aged 101 to 113, from Cape Cod to Carson City, who shared with him at the last possible moment their stories of America’s Great War. Nineteenth-century men and women living in the twenty-first century, they were self-reliant, humble, and stoic, never complaining, but still marveling at the immensity of the war they helped win, and the complexity of the world they helped create. Though America has largely forgotten their war, you will never forget them, or their stories. A decade in the making, The Last of the Doughboys is the most sweeping look at America’s First World War in a generation, a glorious reminder of the tremendously important role America played in the war to end all wars, as well as a moving meditation on character, grace, aging, and memory.

“An outstanding and fascinating book. By tracking down the last surviving veterans of the First World War and interviewing them with sympathy and skill, Richard Rubin has produced a first-rate work of reporting.”—Ian Frazier, author of Travels in Siberia

“I cannot remember a book about that huge and terrible war that I have enjoyed reading more in many years."—Michael Korda, The Daily Beast

About the author
Richard Rubin

Richard Rubin is the author of Confederacy of Silence. He has written for the Atlantic, the New York Times Magazine, The New Yorker, Smithsonian, and New York magazine. He lives in New York and Maine. Learn more about Richard Rubin at thelastofthedoughboys.com or follow him on twitter @LastDoughboys.

"An outstanding and fascinating book. By tracking down the last surviving veterans of the First World War and interviewing them with sympathy and skill, Richard Rubin has produced a first-rate work of reporting. Almost a hundred years after the event, he makes that immensely consequential and partly forgotten war as alive as twenty minutes ago." — Ian Frazier, New Yorker contributor and author of Travels in Siberia

"Richard Rubin has written the most riveting and astonishing book about World War I that I have read in a decade. No matter what you think about that terrible conflict, this book will lift up your heart, not only about the war but about being an American. It's unique!" — Thomas Fleming, author of The Illusion of Victory: America in World War I

"From its boffo, page-length first sentence situating the First World War in American memory (‘before the Band-Aid and nylon and the ballpoint pen and sliced bread’) to its moving concluding portrait of Frank Buckles (1901-2011),’the last of the last’ of the doughboys, this book makes irresistible reading. A fusion of reportage, memoir, and history, The Last of the Doughboys is a work of learning, wit, and compassion." — Jack Beatty, author of The Lost History of 1914

"Richard Rubin has performed an extraordinary feat of World War I sleuthing. He has managed to track down numerous centenarians — centenarians! — who fought in the trenches and has skillfully resurrected their memories in a way that brings that now sepia-toned conflict into focus as sharp as a bayonet. Rubin refers to these doughboys as 'the forgotten generation.' Yet he brings them back unforgettably. And his book is addictively readable." — Joseph E. Persico, author of Roosevelt's Centurions: FDR and the Commanders He Led to Victory in World War II

"Richard Rubin has done something that will never be possible for anyone to do again. His interviews with the last American World War I veterans — who have all since died — bring to vivid life a cataclysm that changed our world forever but that remains curiously forgotten here. And his research and battlefield visits help us picture the background to the survivors' stories." — Adam Hochschild, author of To End All Wars: A Story of Loyalty and Rebellion, 1914-1918

"My namesake was a great-uncle who faked his age and enlisted in the Army as a teenager — shipping off to France and fighting in World War I, where he was wounded and gassed. I cherish his Purple Heart. And I remember long conversations with him as he thought back on his experiences, by turns horrific and comic. Now, in an extraordinary work that combines oral history and personal reporting, Richard Rubin relates his encounters with the last survivors of that war, centenarians all —the ‘forgotten generation,’ as he calls them. The Last of the Doughboys is a book that puts Rubin’s trademark style on display: it is deeply researched, shrewdly observed, and warmly humane." — Cullen Murphy, editor-at-large, Vanity Fair

"Richard Rubin's The Last of the Doughboys is more than just a collection of memories. It is a moving tribute — a final salute — to a generation of men who gave their all to win the war that would, they hoped, end all wars. This intimately written book will stand at the forefront of World War I literature for many years to come." — Edward G. Lengel, author of To Conquer Hell: The Meuse-Argonne, 1918

"Richard Rubin's vivid and lively interviews with the last surviving veterans of World War I have preserved the voices and memories of the men who fought the nation's first modern war. It is an important contribution to history, an act of historical justice to soldiers whose achievements and sufferings are seldom remembered, and a fascinating view of history through the eyes of those that made it." — Richard Slotkin, author of Lost Battalions: The Great War and the Crisis of American Nationality

"Richard Rubin's brilliant The Last of the Doughboys is a living, breathing monument to an almost criminally unsung generation of American heroes — and a vivid and richly detailed portrayal of their era and their war. Beautifully and knowledgably written, the book ensures that the doughboys' achievements on the battlefields of World War I, as well as at home, will never again be forgotten." — James Carl Nelson, author of The Remains of Company D: A Story of the Great War and Five Lieutenants

"The Last of the Doughboys is a fascinating account of the American experience of World War I and the astonishing power of memory: oral memory, literary memory, and the collective memory of monuments and cemeteries. Actually, it is not the Korean War but World War I that is truly the forgotten war in American culture, but Richard Rubin brings it to life, etched with great narrative richness." — Gerald Early, Merle Kling Professor of Modern Letters, Washington University in St. Louis

"Affecting . . . Give[s] fresh texture to what’s already known. Rubin is skillful in his interviewing, remorseless in his efforts to chase down his subjects, thoughtful of their age. . . He has brought them back to life. His book is a fitting epitaph to brave men too often overlooked." — Publishers Weekly

"Fascinating and deeply moving . . . An important and masterful tribute to those who participated in a conflict that continues to shape the world today." — Booklist

"A brilliant and unexpected delight . . . Clever, engrossing, moving, and richly detailed . . . Rubin is a sensitive and terrific interviewer, a good listener, with a faultless eye and ear for detail… not only a good writer and born raconteur, with a gift for telling the reader things that are unexpected and fascinating—American songs in World War I, women who joined the United States Navy in World War I, the sad fate of African-American soldiers—but one with a dogged determination . . . What Richard Rubin has done is remarkable--his book is at once a cultural history of a vanished America, simpler, more rural, less driven by technology and science, poorer, but infinitely more “neighborly,” in the best sense of the word, a military history of the best kind, and a chance to meet a truly fascinating group of people, I liked every one of them, and counted myself lucky that Richard Rubin has achieved the most difficult of feats, to find a new and different way of writing about World War I (which I would have thought almost impossible) and to have brought to vivid life a group of truly forgotten people, who once did something memorable, then slipped through the cracks into a long anonymity from which they might never have emerged.I cannot remember a book about that huge and terrible war that I have enjoyed reading more in many years." —Michael Korda, The Daily Beast

"Engaging . . . memorable . . . The book succeeds by creating degrees of connection, even as it reshapes our consciousness." — The Boston Globe 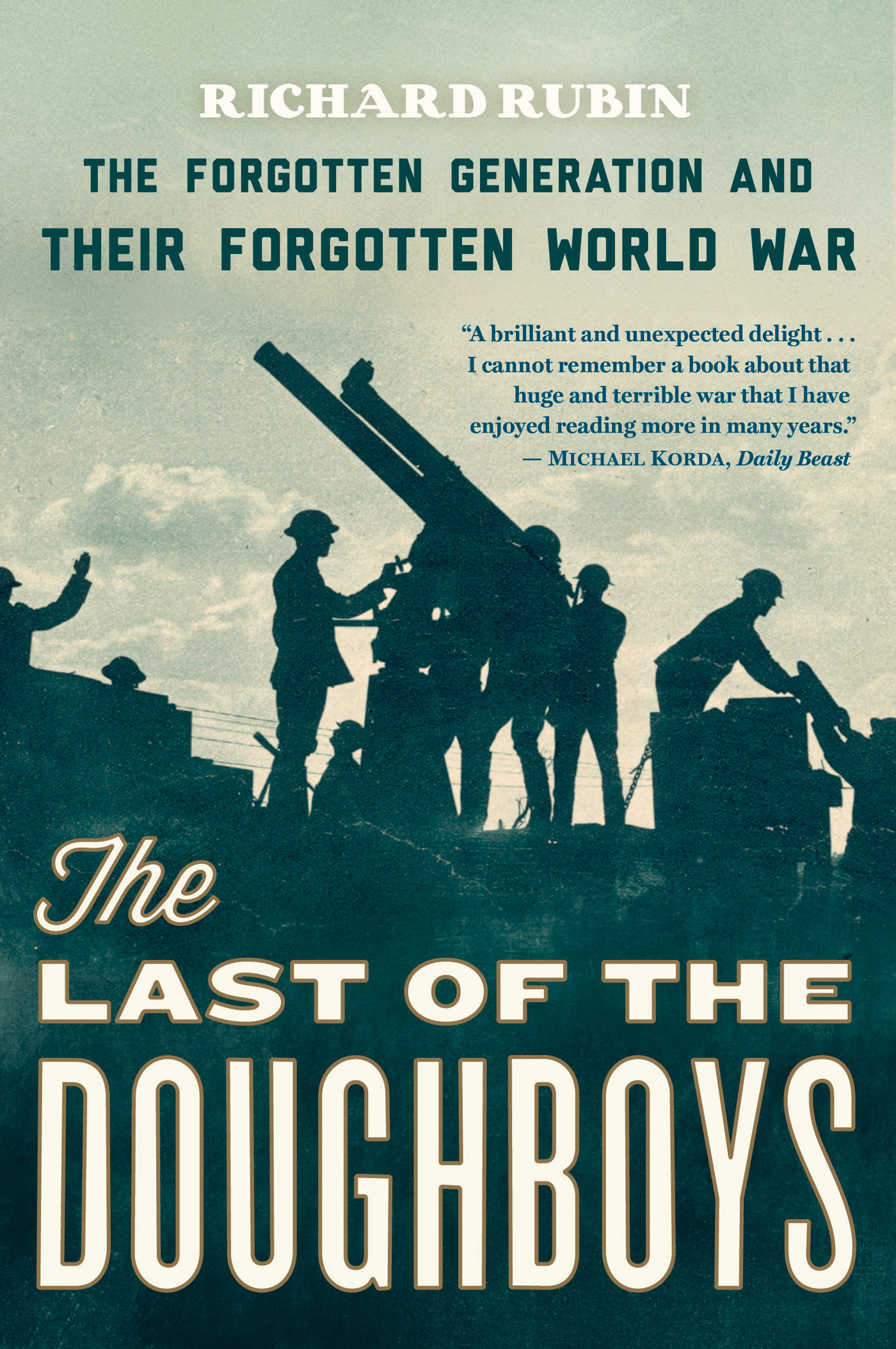