The adventures continue for the young assistants to the best monster catcher in Victorian London! In this exciting conclusion to the trilogy begun with How to Catch a Bogle, Ned becomes a bogler’s apprentice as London seeks to banish its bogle infestation once and for all.

With the plague of bogles in Victorian London barely contained, bogle hunter Alfred Bunce needs all the help he can get. So Ned Roach becomes a bogler’s apprentice, luring child-eating monsters from their lairs just like his friends Jem and Birdie. It’s dangerous work that takes Ned into mysterious and hidden parts of the city. Yet times in London are changing; as the machine age emerges, the very existence of bogles is questioned, and the future of bogling is in jeopardy. And the stakes get even higher for the team of boglers when an old enemy appears—a threat that may be deadlier than any bogle.

Catherine Jinks grew up in Papua New Guinea and now resides in New South Wales, Australia. She is a three-time winner of the Children's Book Council of Australia Book of the Year award and has received the Centenary Medal for her contribution to Australian children's literature. Her popular works for young readers include the Evil Genius series, The Reformed Vampire Support Group, and the trilogy that began with How to Catch a Bogle. Visit her website at www.catherinejinks.com.

Newgate Market was an empty, echoing shell. Doors hung crookedly. Windows were smashed. Iron hooks were rusting away. The market clock was no longer ticking, and the stalls were silting up with rubbish.

All the butchers had long ago moved to Smith?eld, taking their sides of beef and saddles of mutton with them.

“I don’t know why this place ain’t bin torn down long since,” Alfred Bunce remarked. He stood hunched in the rain with his bag on his back, gazing across an expanse of muddy cobbles, toward the central pavilion. Water dripped off his wide-brimmed hat and trickled down his long, beaky nose. Even his drooping mustache was sodden. “Ruined buildings breed every kind o’ strife, from coining to murder,” he added. “Bogles would be the least o’ yer problems round here.”

Beside him a brown-eyed boy was scanning the shops that fronted the square. Some of them were boarded up, and those that remained in business were for the most part seedy-looking taverns or coffeehouses.

“I don’t see Mr. Wardle,” said the boy, whose name was Ned Roach. He was dressed in a navy-blue coat with brass buttons, very worn at the elbows, and a pair of buff-colored trousers, damp and soiled. A ?at cap sat on his springy brown hair. Despite his missing tooth and scarred hands, he looked respectable enough. “Which o’ these here establishments would be Mother Okey’s?”

“Ask Jem,” Alfred replied. “He knows the neighborhood better’n I do.”

“Jem!” Ned turned to address another boy lagging behind them. “You bin here once. Which pub is Mother Okey’s?”

Jem Barbary didn’t answer. He was too busy peering at the dark silhouette of someone who was skulking on a nearby doorstep. Ned didn’t blame Jem for being nervous. This was John Gammon’s territory, and Gammon—also known as Salty Jack—was a dangerous man.

“What’s that feller doing there, lurking like a cracksman’s crow?” Jem hissed. He was smaller and thinner than Ned, with so much thick black hair that his head looked too big for his body. He wore a bedraggled suit of speckled brown tweed. “D’you think he works for Salty Jack?”

“Mebbe he’s sheltering from the rain,” Ned offered. But Jem scowled. “I don’t trust him. I don’t trust no one hereabouts.”

“Which is why we should pick up our pace.” Alfred spoke in a gruff, impatient voice. “Wardle said to meet at Mother Okey’s. Any notion where that might be?”

Jem considered the half-dozen public houses scattered around the market square. “ ’Tain’t that’un,” he announced, pointing. “That there is the Old Coffeepot. I spoke to the barmaid last time I passed through.”

“And that?” Alfred nodded at the nearest tavern. Although it had a sign suspended above its front door, none of them could read the lettering.

It was. Ned recognized the man who had emerged from the alehouse to their right. He was large and middle-aged, with fuzzy side-whiskers and a slight paunch. Though respectably dressed, he had an untidy look about him—almost as if his clothes were buttoned askew. Wisps of wiry gray hair escaped from beneath his bowler hat. His necktie was crooked. There was a crusty stain on his waistcoat lapel and an unshaven patch on his chin.

Even when he spotted Alfred, his worried expression didn’t change. The anxious lines seemed permanently engraved across his brow.

“I was afeared you might have taken a wrong turn.” Mr. Wardle’s small blue eyes swung toward the boys. “I see you brought your apprentices with you.”

Alfred gave a brusque nod. “Can’t kill a bogle without bait,” he growled.

“Yes, of course.” Mr. Wardle blinked uneasily at Ned, who wondered if the Inspector of Sewers could even remember his name. They had been introduced to each other only a week before, at the Metropolitan Board of Works, where they had all sat down at a very large round table to launch the Committee for the Regulation of Subterranean Anomalies.

But more than a half-dozen people had been present at that meeting, and a lot of business had been discussed. And since neither Ned nor Jem had made much of a contribution, it seemed likely that Mr. Wardle had forgotten who they were.

“This neighborhood ain’t safe for Jem,” Alfred continued. “There’s a butcher as runs all the rackets hereabouts, and he’s got a grudge against the lad. We ain’t bin troubled thus far, since the butcher don’t know where I live. But the longer we stay, the more likely it is we’ll be spotted by one of his cronies. And I don’t want that.”

“So you’d best tell me about this here job, and then we can set to it,” Alfred ?nished. “Back at the Board o’ Works you mentioned there’s three young’uns vanished, and one sighting in a sewer. Which sewer, and where was the kids last seen?”

Mr. Wardle hesitated. “Perhaps it’s best I show you what was shown to me,” he ?nally suggested, then began heading for the central pavilion. Alfred hurried after him with the boys in tow.

As they approached the dilapidated structure that had once sheltered row upon row of hanging carcasses, Ned felt uneasy. There was no telling what might lurk in that labyrinth of dark, rotting wood. As Alfred had said, bogles might be the least of their problems.

“No.” Ned was sure of that. John Gammon was a “punisher” who liked to threaten local shopkeepers with bodily harm if they didn’t hand over a portion of their earnings to him. But Eugene Wardle wasn’t a local shopkeeper; he was a municipal of?cer who hailed from Holloway. “Ain’t no reason why Mr. Wardle should know Salty Jack Gammon. I’m just concerned them missing boys is all a hum. Mebbe Jack’s bin spreading tales, to lure us into a dark, quiet corner—”

Jem cut him off. “It ain’t no tale. There’s at least one kid gone, for I heard it from the barmaid at the Old Coffeepot when I were here last.” After a moment’s pause he added, “She said the lad passed a bad coin at the inn, then legged it into the market cellars. No one’s seen him since.”

"Fans of How to Catch a Bogle (rev. 9/13) and A Plague of Bogles (rev. 1/15) will appreciate Jinks’s accessible prose, colorful with Victorian slang (glossary included); her inventive, briskly paced plot; and the gloom and charm of this trilogy-ender’s quasi-Victorian setting."

"...the conclusion of this trilogy will satisfy thrillseekers and armchair philosophers alike."

"Fans of this richly atmospheric adventure trilogy, which began with the riveting How to Catch a Bogle (2013), won’t want to miss the final volume."

"The final book of the trilogy contains everything that made the first two so appealing: finely drawn characters and engaging action sequences all set in the richly described Victorian setting." 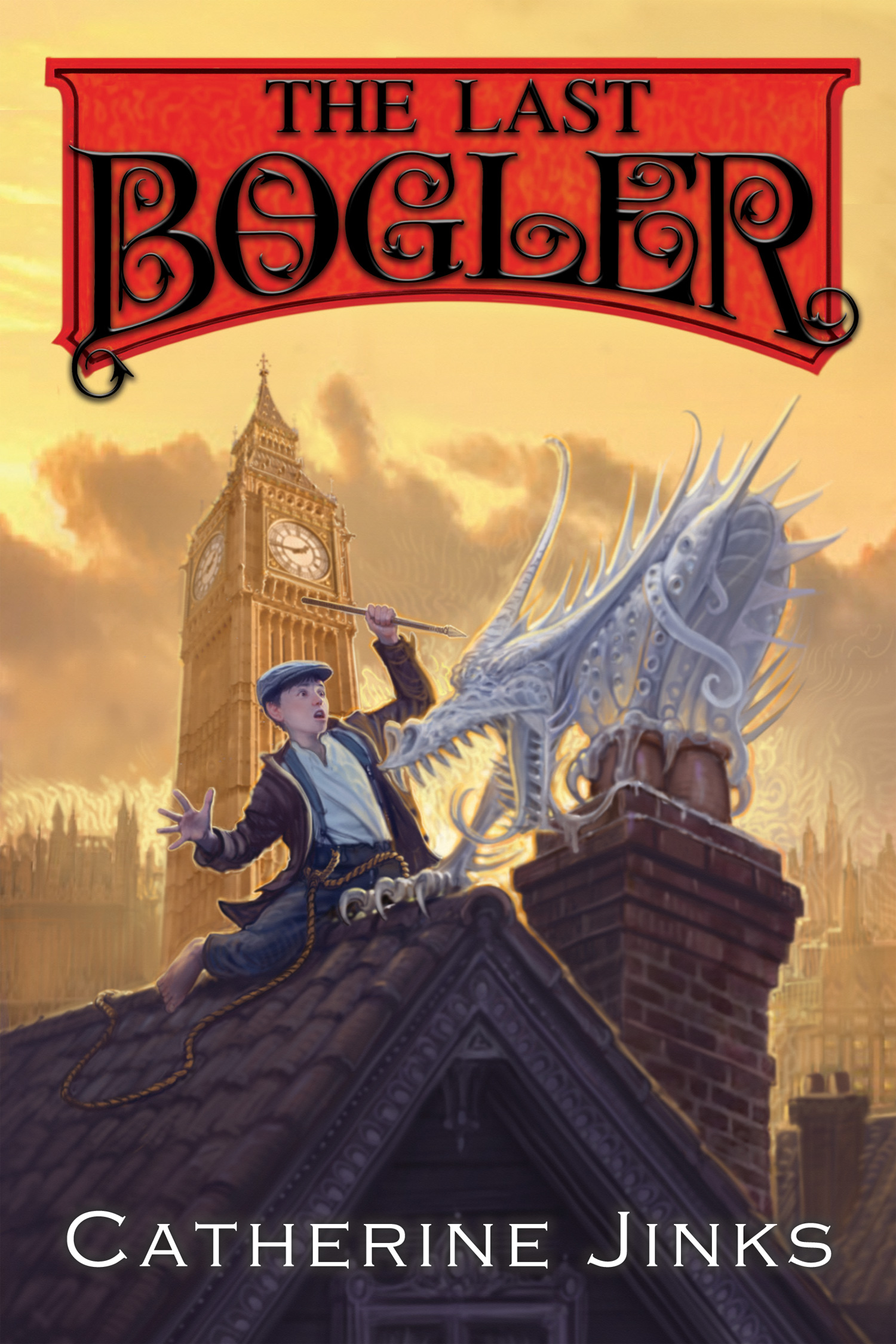