A collection of folk tales from the southern Appalachians that center on a single character, the irrepressible Jack.

A collection of folk tales from the southern Appalachians that center on a single character, the irrepressible Jack.

About the author
Richard Chase

Richard Chase collected The Jack Tales in the mountain country of North Carolina, where they have been handed down for generations. Everyone knows the story of Jack and the Beanstalk. This book contains eighteen stories about Jack, many of them still completely new to the average reader. And what adventures Jack has! Noted American folklorist Richard Chase (1904–1988) has been called the man “most responsible for the renaissance of Appalachian storytelling.” A collector of tales that had been handed down from generation to generation in the Appalachian regions of the United States, Chase was born in Alabama and lived in the mountains of North Carolina.

Jack in the Giants’ Newground

One time away back years ago there was a boy named Jack. He and his folks lived off in the mountains somewhere and they were awful poor, just didn’t have a thing. Jack had two brothers, Will and Tom, and they are in some of the Jack Tales, but this one I’m fixin’ to tell you now, there’s mostly just Jack in it.

Jack was awful lazy sometimes, just wouldn’t do ary lick of work. His mother and his daddy kept tryin’ to get him to help, but they couldn’t do a thing with him when he took a lazy spell.

Well, Jack decided one time he’d pull out from there and try his luck in some other section of the country. So his mother fixed him up a little snack of dinner, and he put on his old raggedy hat and lit out.

Jack walked on, walked on. He eat his snack ’fore he’d gone very far. Sun commenced to get awful hot. He traveled on, traveled on, till he was plumb out of the settle-ment what he knowed. Hit got to be about twelve, sun just a-beatin’ down, and Jack started gettin’ hungry again.

He came to a fine smooth road directly, decided he’d take that, see where it went, what kind of folks lived on it. He went on, went on, and pretty soon he came to a big fine stone house up above the road. Jack stopped. He never had seen such a big house as that before. Then he looked at the gate and saw it was made out of gold. Well, Jack ’lowed some well-doin’ folks must live there, wondered whether or no they’d give him his dinner. Stepped back from the gate, hollered, “Hello!”

A man came to the door, says, “Hello, stranger. What’ll ye have?”

“Don’t know as I need to hire anybody right now. What’s your name?”

“Come on up on the porch and cool off. You’re not in no hurry, are ye?”

Jack says, “Well, I’ll stop a little while, I reckon.”

Shoved back that gold gate and marched on in. The man reached in the door and pulled out a couple of chairs. Jack took one and they leaned back, commenced smokin’. Directly Jack says to that man, “What did you say your name was, mister?”

“Well, now, King,” says Jack, “hit looks like you’d be a-needin’ somebody with all your land. I bet you got a heap of land to work.”

“Oh, I’m the workin’est one of all back home yonder.”

“Why, that’s all I ever done back home.”

The old King sort of looked at Jack and how little he was, says, “Well, now, Jack, I have got a little piece of newground I been tryin’ for the longest to get cleared. The trouble is there’s a gang of giants live over in the next holler, been disputin’ with me about the claim. They kill ever’ Englishman goes up there, kill ’em and eat ’em. I reckon I’ve done hired about a dozen men claimed to be giantkillers, but the giants killed them, ever’ last one.”

“Well, they’re all about six times the size of a natural man, and there’s five of ’em. The old man has got four heads and his old woman has got two. The oldest boy has got two heads, and there’s a set of twins has got three heads a-piece.”

Jack didn’t say nothin’, just kept studyin’ about how hungry he was.

“All right, son. We’ll make arrange-ments about the work after we eat. I expect my old woman’s about got dinner ready now. Let’s us go on in to the table.”

Well, Jack eat about all the dinner he could hold, but the King’s old woman kept on pilin’ up his plate till he was plumb foundered. His dish set there stacked up with chicken and cornbread and beans and greens and pie and cake, and the Queen had done poured him milk for the third time. The old King kept right on, and Jack didn’t want them to think he couldn’t eat as much as anybody else, so directly he reached down and took hold on the old leather apron he had on and doubled that up under his coat. Then he’d make like he was takin’ a bite, but he’d slip it down in that leather apron. He poured about four glasses of milk down there, too. Had to fasten his belt down on it so’s it ’uld hold.

Well, directly the King pushed his chair back, and then he and Jack went on out and sat down again, leaned back against the house and lit their pipes.

King says to Jack, says, “If you get that patch cleared, Jack, I’ll pay ye a thousand dollars a-piece for ever’ giant’s head you bring down, and pay ye good wages for gettin’ that patch cleared: ten cents a hour.”

Jack said that suited him all right, and he got the King to point him out which ridge it was. Then Jack says to the King, “You say them giants live over in the other holler?”

King said they did.

Jack says, “Can they hear ye when ye start hackin’?”

“They sure can,” says the King.

“Why, no, bedads!” says Jack. “Why, I may be the very giantkiller you been lookin’ for. I may not kill all of ’em today, but I’ll try to get a start anyhow.”

So the King told him maybe he’d better go on to work. Said for him to go on out past the woodpile and get him a axe, says, “You might get in a lick or two ’fore them giants come. You’ll find a tree up there where them other men have knocked a couple of chips out’n. You can just start in on that sa...

"Humor, freshness, colorful American background, and the use of one character as a central figure in the cycle mark these eighteen folktales, told here in the dialect of the mountain country of North Carolina." Booklist, ALA 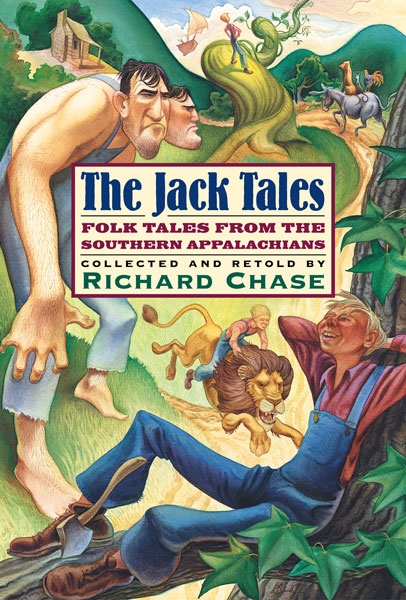