The Informant: An Otto Penzler Book

The Butcher's Boy is back! Thomas Perry's vengeful assassin has returned to play a deadly psychological game with Elizabeth Waring, the only Justice Department official who ever believed he existed. Can these two from opposite sides of the law come together to take on the mafia?

“Perry’s novels—the best ones—are a master class in thriller writing. The Informant should be the newest addition to that syllabus, read for devouring first, and analysis thereafter.”—Los Angeles Times

The Butcher’s Boy is back. Thomas Perry’s vengeful assassin has returned to play a deadly psychological game with Elizabeth Waring, the only Justice Department official who ever believed he existed.

The Butcher’s Boy knows Waring can help him hunt down the Mafia boss who sent a team of hit men to kill him—and in return he offers her key information that will help her crack an unsolved murder. So begins a new assault on organized crime and an uneasy alliance between opposite sides of the law. As the Butcher’s Boy works his way ever closer to his deadly enemy in an effort to kill him first, Waring is in a desperate struggle, either to force her unlikely ally to become a protected informant, or to take him out of commission for good.

About the author
Thomas Perry

THOMAS PERRY is the author of the Jane Whitefield series as well as the best-selling novels Nightlife, Death Benefits, and Pursuit. He won the Edgar Award for The Butcher’s Boy, and Metzger’s Dog was a New York Times Notable Book of the Year.

"A book-length war of nerves that accentuates the best of Mr. Perry’s gift for using pure logic and gamesmanship to generate breathless nonstop suspense...The Informant is a marvel of tight, thoughtful construction."

"Maybe you’ve heard of him. Named after the foster father (Eddie the Butcher) who taught him his trade, and introduced almost 30 years ago by Thomas Perry in "The Butcher’s Boy," this cold-blooded professional killer is one of the immortals of the genre. Michael Schaeffer, to give his antihero his current alias, seemed a bit mechanical when he briefly came out of retirement two decades ago in "Sleeping Dogs," but he makes a great comeback in The Informant (Otto Penzler/Houghton Mifflin Harcourt, $27) – older wiser and deadlier. Perry has to exert himself to engineer a reunion between Schaeffer, who has surfaced from anonymity to defend himself from the mafia good squads that have taken a sudden interest in him, and Elizabeth Waring, a hyper-vigilant honcho with the Department of Justice whose fondest desire is to turn Schaeffer into a government informant. But once these uneasy civilities are attended to, the Butcher’s Boy is free to kill again, in his own distinctly cruel and inventive way. The fun thing about his professional methods is how low-tech they are. That’s poetic justice for a target like Frank Tosca, an old-school underboss who has called an extraordinary meeting in Arizona to convince the fractious leaders of the big crime families that he can revitalize the mafia and lead it into a new golden age. While everyone is on high alert for marauders brandishing advanced weapons of war, the Butcher’s Boy quietly sneaks into Tosca’s cabin and slits his throat with a hunting knife he picked up at a sporting-goods store. Perry’s immaculate style – clean, polished, uncluttered by messy emotions – suits the Butcher’s Boy, who executes his kills with the same cool, dispassionate skill. But this time there’s something almost human about his awareness of the limitations imposed by his aging body. Luckily, one of the lessons he learned from Eddie is that "killing was mostly a mental business. It required thinking clearly, not quickly." And his mind is still sharp enough to devise the kind of ingenious logistical traps a young computer gamer could only dream of."

"Edgar-winner Perry's excellent third Butcher's Boy novel (after Sleeping Dogs) pits the Butcher's Boy (aka Michael Schaeffer), an impeccably effective hit man, against his old nemesis, Elizabeth Waring, an impeccably honest Justice Department official. Though Waring's boss, arrogant political appointee Dale Hunsecker, tries to hamstring her, Waring wants to bolster her 20-year pursuit of Mafia bosses by turning the Butcher's Boy into America's most important informant. Waring soon enters into an intricate pas de deux with a man who considers death a buy-sell commodity. Meanwhile, this icy yet strangely appealing killer, who reads Waring as well as she reads him, methodically murders capo after capo and their "made men" across the country, the only way he can safely return to his quiet retirement in England with his beloved wife, Meg. Perry offers a compelling, rapid-fire plot, credible Mafia and FBI secondary characters, an indictment of self-serving officialdom, and the old soul-shattering moral dilemma: what is truth?"

"Twenty years after a trio of lowlifes forced him out of retirement (Sleeping Dogs, 1992, etc.), the Butcher’s Boy is back.

When you’re a professional killer who works freelance, your employers are likely to include a large number of nasty guys. So it’s not clear to Perry’s nameless hero, who started calling himself Michael Schaeffer when he moved to England and settled in Bath as the husband of Lady Margaret Holroyd, which of his former associates sent the three men who inadvertently flushed him out of hiding and then tried to kill him. He has no trouble tracing the three to midlevel New York capo Michael Delamina, whom he kills on page two. In order to identify Delamina’s boss, however, he has to consult his old nemesis, Elizabeth Waring of the Justice Department. Taking a leaf from Hannibal Lecter’s playbook, he urges her, 'Tell me, and I’ll tell you something.' When Elizabeth fingers rising under-boss Frank Tosca as Schaeffer’s next target, he gives her some juicy information on an old Tosca murder in return. But although "he had never failed to accomplish his goal when all it entailed was killing someone," her news comes too late to help. By the time Schaeffer kills Tosca, the ambitious under-boss has convened a sit-down in which his counterparts from across the country have agreed to join his vendetta against the Butcher’s Boy—a goal Tosca’s death only makes them more eager to pursue. For her part, Elizabeth is so determined to bring Schaeffer into the Witness Protection Program as the ultimate informant that she’s willing offer him a series of unauthorized deals, which of course he spurns. Schaeffer is squeezed between two collective adversaries with virtually unlimited personnel and resources. On the other hand, only Schaeffer is the Butcher’s Boy. Beneath the sky-high body count, the twisty plot is powered by Perry’s relentless focus on the question of where the next threat is coming from and how to survive it."

"I've said elsewhere that Thomas Perry's novels —the best ones — are a master class in thriller writing. The Informant should be the newest addition to that syllabus, read for devouring first, and analysis thereafter." 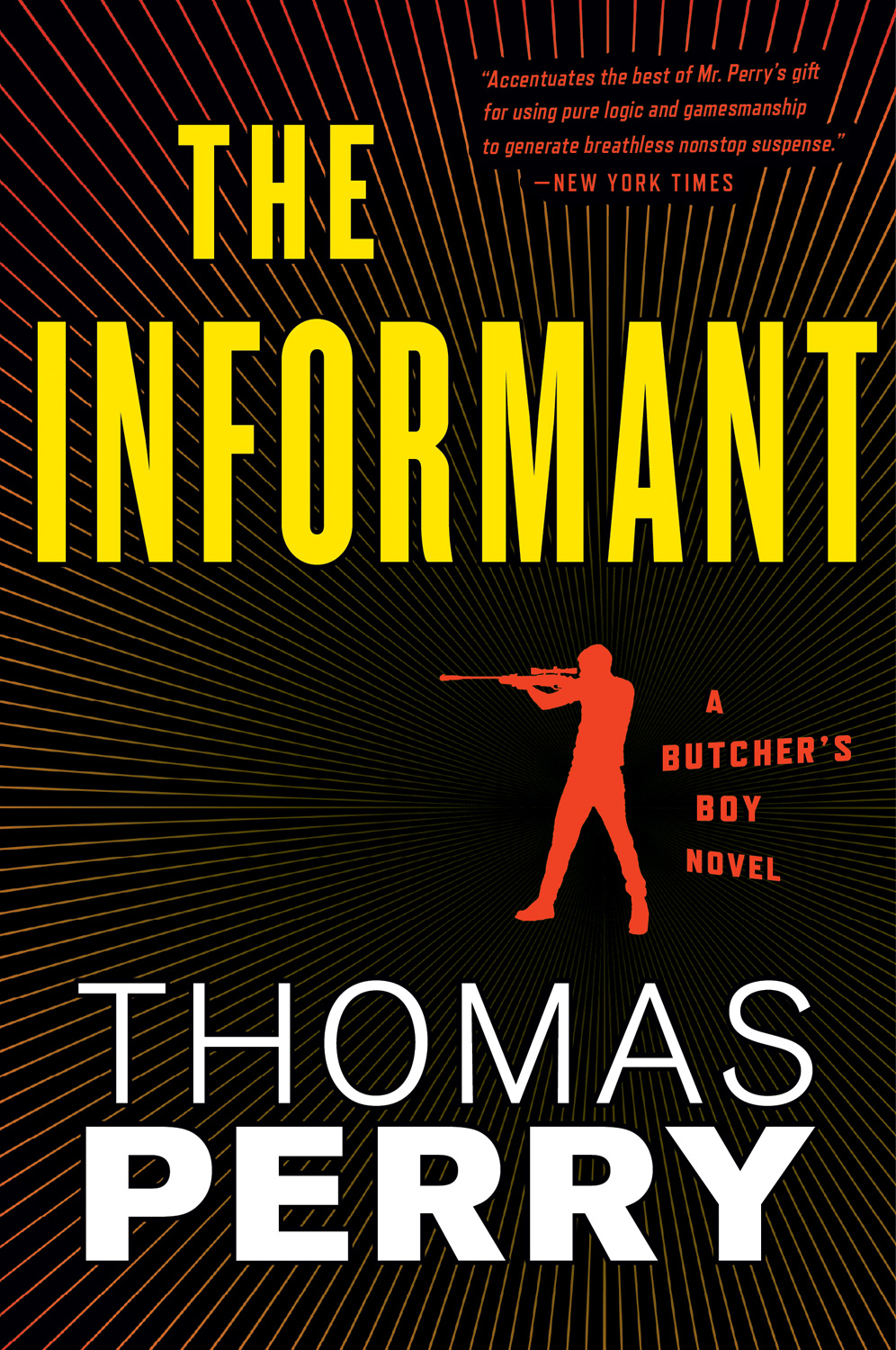