The Heart You Carry Home

A young woman learns how to confront the lingering consequences of war when she rides along with her distant father and his fellow vets on a cross-country motorcycle trip that will take them away from her new, Iraq-scarred husband and toward a mysterious military cult in the Utah desert.

A novel about surviving on the home front, fathers and daughters, and the limits and limitlessness of love

Becca Keller is no stranger to the way war can change a man. Her Vietnam vet father, King, has been more out of her life than in. Her mother boycotts her wedding because Becca is making the same mistakes she did—yoking herself to a man just back from battle. And Ben is different after his second tour. Within days of the wedding he turns dangerous, and Becca runs to the only person she has left.

King, though, is heading West with his motorcycle buddies, out to a place they call Kleos. A mysterious desert compound ruled over by a guru-like commanding officer, it is a refuge for some soldiers, but might be the death of others. There, Becca will be faced with the possibility that she may not know the real damage in her loved ones’ hearts. In finally seeing her father’s demons, she might just be able to start with her husband on their own journey back to peace.

The Heart You Carry Home lays bare the violence soldiers bring home, as one woman fights for the men in her life who have been scarred by different wars in disturbingly similar ways. It “combines great storytelling with social questions that are both as current and as old as war” (Karl Marlantes). And it mines the trials of generations of American families to find hope for the next.

About the author
Jennifer Miller

JENNIFER MILLER, the author of Inheriting the Holy Land: An American's Search for Hope in the Middle East, holds a BA from Brown University, an MS in journalism from Columbia, and an MFA in fiction writing from Columbia. Her work has been published inthe New York Times, Marie Claire, Men's Health, the Christian Science Monitor, Salon.com, and others.

There were few streetlights in town, and the army duffle, crammed with Becca’s clothes, kept sliding from the handlebars of her bicycle. Still, she knew these roads well enough to take them blind. Here were the doublewides, flimsy as Monopoly pieces; the gardens dotted with plaster birdbaths, and the harried-looking lawns scattered with dirt bikes and abandoned Barbies. This was her beloved, unbeautiful Dry Hills, Tennessee.

She pushed past the town limits and pedaled on. Damn Ben for taking her old Cadillac. Only a month after their wedding and he had turned into someone else, like any other man around here ?— ?gotten drunk, disappeared, forcing her to flee into the night. The foggy August air grew thick with droplets of moisture large enough to catch on the tongue. Becca stopped and looked around. Where was she? Out in the alfalfa fields, a glittering barn wavered like a mirage. And there was Ben, a distant apparition, playing the fiddle tune he’d written for her. “It’s a loooove song,” he’d crooned the night before his deployment. “I’m going to play it at the wedding and embarrass the hell out of you.” It was one of the few promises he’d kept, and Becca’s cheeks flushed again at the memory. Since then, there had been no love songs. Nothing except fighting and silence.

After another fifteen minutes of hard pedaling, she came to a crossroads. Her father’s house was to the left. Right and straight meant farmland for miles. Becca had never dropped in on King uninvited, and it was after midnight. But what choice did she have? Her mother was holed up in a Colorado commune, and the girls she knew in town were asleep next to their husbands and newborns. With a queasy feeling, she looked around, as though a third road might suddenly appear. Get on with it! she ordered herself and pushed on.

Twenty minutes later, King’s house appeared behind a bulwark of trees. The large picture window in front was dark, indifferent, like a person looking the other way. As Becca climbed off the bike, a ring of pain ignited around her waist, belly to back. She checked under her shirt. The bruises were dark, multicolored splotches, and she registered them with detachment; they matched a painting she’d made in last semester’s art class. She dropped her shirt, hoisted Ben’s duffle onto her shoulder, and climbed her father’s steps. Then she sucked in a breath, and knocked.

From inside came a cough, followed by heavy steps, clomping fee-fi-fo-fum. A voice growled, “Who’s there?” Becca stated her name and heard the metallic chinks of many locks sliding open. King lived beside a cow pasture, but he’d fortified the house as though awaiting a full-on assault, perhaps from a rogue government force or maybe just the government. She’d never figured out who his enemies were.

The door swung back to reveal his hulking figure. Despite the hour, he was fully dressed: black jeans and a Sturgis Rally T-shirt, steel-wool hair pulled into a ponytail. His jowls sagged with a mastiff’s despondent frown. Becca’s father was sixty years old, but he looked closer to seventy. When he noticed the army duffle, his thick lips sank.

“Can I come in?” She considered throwing a Dad onto the end of this sentence, but the word wouldn’t come, not even as guilt ammunition. She waited, trying to breathe steady. He was going to send her away. But he held the door open and stepped aside.

Becca followed him into the kitchen and sat down at the table. This room usually indicated King’s physical and mental state. Many times she’d arrive and immediately take up arms against the roaches, mildewed towels, and weeks of frying-pan grease. The fridge was generally a bright electric wasteland. It was a wonder her father survived out here on his own. At present, however, the room was spotless. King made coffee and, smiling, put two mugs on the table. The coffee tasted like dirt, but Becca would have accepted a mug of lighter fluid from her father had he offered it with a smile.

“What’s going on?” King asked, sitting heavily across from her.

“We had a fight.” Becca pressed her molars together, determined to keep renegade tears at bay. She needed to convince King that things were bad enough for her to be here but not so bad that he’d grow agitated, take action.

“What kind of fight?”

Becca met her father’s eyes, then looked away.

“Becca, what kind of fight?” he repeated.

“I biked all the way out here.”

King drew in a quick breath and patted her hand. It had taken many months for him to show even this much affection. He gave her a paper towel from the roll she’d bought at Costco the last time she’d gone shopping for his necessities; King did not like crowded public places.

Becca blew her nose, a brash, earsplitting honk. According to her mother, this was the single trait that father and daughter shared: a propensity to sneeze and blow like storm systems.

Becca swallowed. Of course their détente of the past few months couldn’t last. He was going to send her away. Her mind spun into the uncertain future. Where to go?

“Thing is,” he continued, “I’m leaving on a trip tomorrow. But —” His gray eyes brightened. “I’m stopping at Kath’s on the way.”

Aunt Kathy. Her house, teetering on the peak of a mountain overlooking the Buffalo River Valley, had been Becca’s childhood refuge when the home front turned nasty. When she was old enough to think about it, Becca couldn’t believe her mother had put a six-year-old on a bus alone, but the frequent trips had taught her self-reliance. Now, secreting herself away with Kath seemed like the perfect solution. She’d be an Ozark girl for the rest of the summer. And after she’d erased the past few years from her memory, she’d continue west. Like a pioneer on the Oregon Trail, she would make her own manifest destiny. She’d take hold of her new opportunity. One that nobody ?— ?not even Ben ?— ?knew about.

“If it’s not too much trouble, Dad,” Becca said, finally looking King in the eye, “I’d love to come with you.”

Despite its being the middle of the night, King retreated to his work shed. Becca was exhausted, but she was also sticky with dried sweat and, beneath that, a grimy heartsickness that she hoped a blast of hot water might dissolve. She tiptoed into the monk’s cell that was King’s bedroom, searching for a towel. Her father’s dresser displayed the barest signs of life: a tattered spy novel, a pack of American Spirits, and a couple of photos in drugstore frames. But there, unexpectedly, was her high-school graduation portrait: her hair long and blond, like some hippie girl’s. Becca had chopped it off jus...

"In a powerful novel about soldiers returning from war, Miller shows that sometimes the worst wounds of war are the ones not visible from the outside...Miller's vivid characters illustrate the emotional and physical damages brought home by returning veterans, forcing the reader into harrowing, moving places. This novel will haunt readers long after the final page is turned."—Publishers Weekly

"Miller offers an impressively fresh perspective on soldiers returning from war by delivering a memorable heroine...[W]ell done and worthwhile." —Booklist

“Passionate, atmospheric,The Heart You Carry Home is the work of a young writer full of energy and promise.”—Jennifer Egan, author of A Visit from the Goon Squad and others

“Speaking as the daughter, as well as the wife, of a veteran, I can say this book packs an honest punch. The Heart You Carry Home gives voice to generations of soldiers and their families seeking understanding and forgiveness. A testimony to love’s ultimate ability to heal even our most hidden wounds.” —Sarah McCoy, New York Times bestselling author of The Mapmaker's Children and The Baker’s Daughter

"Here is a tale of family, community, love, and madness, as a woman who is both the daughter of a Vietnam veteran and wife of an Iraq veteran journeys to heal the heart-wounds of war. The Heart You Carry Home combines great story-telling with social questions that are both as current and as old as war. I read it in one sitting."—Karl Marlantes, author of Matterhorn

"A powerhouse of a novel. Miller captures the emotional minefield of veterans returning home from the battlefields of Iraq and Afghanistan with vivid, engaging detail. This novel cuts right to the heart."—David Abrams, author of Fobbit, a 2012 New York Times Notable Book

"In Becca Keller, Miller has crafted a fierce heroine whom you'll eagerly follow across the country, into the depths of a madman's sanctum, and back into the light--stronger but forever changed. The Heart You Carry Home is a story about fathers and daughters, and how the legacy of war not only breaks families apart, but can pull them back together."—Joanna Smith Rakoff, author of My Salinger Year

“An engrossing tale layered in mystery, told with compassion and - at the perfect moments - wit. Miller gives us a truthful look at the fallout from war, both today's wars and the conflict in Vietnam. A damn fine read.”—Artis Henderson, author of Unremarried Widow

"With The Heart You Carry Home, Miller has crafted a thrilling, surprising, and mercilessly readable novel about the far-reaching effects of trauma, our crippling capacity for guilt, and the long road to forgiveness. Ultimately though, it's a novel about healing."—Jonathan Evison, author of West of Here, All About Lulu, and The Revised Fundamentals of Caregiving 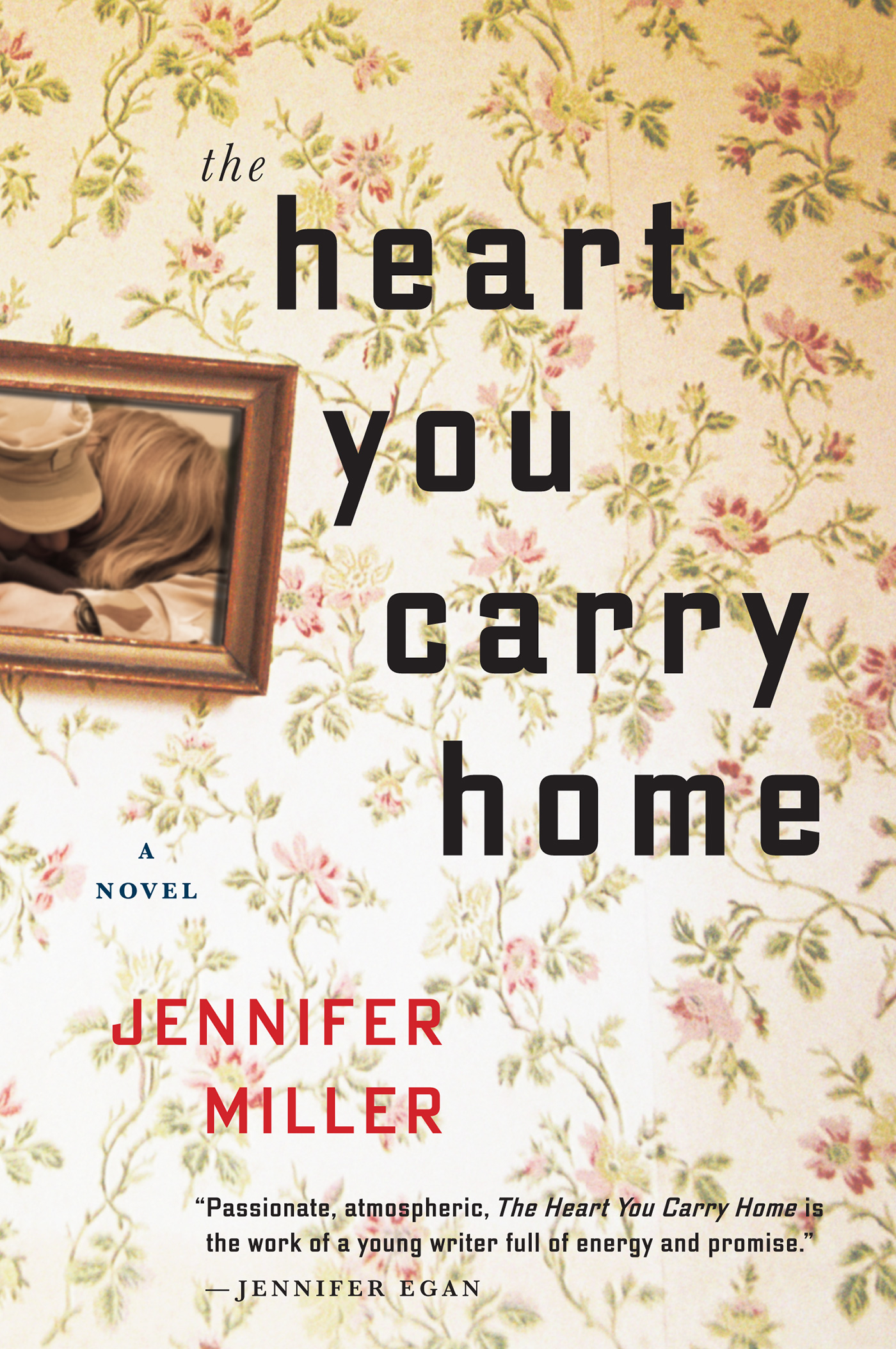