The Good, the Bad, and the Bossy

Being a boss isn’t all it’s cracked up to be in the second book of the Best Babysitters Ever series. Perfect for fans of Rachel Vail and Sarah Mlynowski.

Being a boss isn’t all it’s cracked up to be in the second book of the Best Babysitters Ever series. Perfect for fans of Rachel Vail and Sarah Mlynowski.

Just when Malia, Dot, and Bree (aka the Best Babysitters Ever) corner the Playa Del Mar babysitting market, their lives get even busier. Malia’s evil older sister ropes her into a thankless internship. Dot must win the science fair. And Bree’s brand new cat turns out to be a holy terror. Meow! Malia is frustrated by the group’s lack of commitment until she has an idea so great it rivals the creation of the club in the first place: they can hire new babysitters and take a cut of their wages! It’s all of the money, and less of the babysitting. This plan is too perfect to fail. Until—spoiler alert—it does, in the most hilarious way possible.

About the author
Caroline Cala

Caroline Cala is a writer and editor residing in Brooklyn. She has worked as a book editor and as a ghostwriter on a number of books by notable people. Her work has appeared in Vogue, ELLE, Refinery29, and others. Best Babysitters Ever is her middle grade debut. Visit her on Instagram @CarolineCala.

Sometimes, if she tried really hard, Malia Twiggs could remember a time when she thought boogers were gross. It’s not that she currently liked boogers—she hadn’t gotten an entirely new personality or anything—but in the months since starting her own babysitting club, she had definitely learned to make peace with them. It was amazing, really, the limitless boundaries of personal growth.

“Don’t worry about a thing!” Malia yelled, waving across the yard to her best friends and fellow babysitters, Bree Robinson and Dot Marino. “I’ve got this situation under control.”

The situation at hand was a crying Jonah Gregory, their four-year-old babysitting charge who had just tripped while chasing a butterfly. The damage seemed to be two skinned knees and a lot of tears but, thankfully, nothing else.

Bree offered a little salute and Dot nodded before they turned their attention back to the other three Gregory children.

Malia calmly guided Jonah across the yard and into the house. As a now-experienced babysitter, she knew exactly how to clean and bandage his scraped knees, tell a goofy joke to put an end to the tears, and, yes, do away with his crying-induced snot.

“BUT IT HUWTS!” yelled Jonah, who could not yet pronounce the r sound.

“I know it hurts, but look how brave you are,” Malia said, expertly applying a Band-Aid emblazoned with smiling cartoon rabbits. “And now that you’re all patched up, I have a surprise for you.”

“You get to have ice cream!”

At the mention of a frozen treat, Jonah’s small, chubby face visibly brightened.

Babysitting had taught Malia many things, including how easily little children could be bribed with snacks, how willing they were to believe whatever an older person told them, and, last but certainly not least, how nice it was to buy things with your own money. But on a deeper level, babysitting had shown her what it meant to transform. One day, you could be a regular seventh-grader with no crisis management skills whatsoever, and then, before you knew it, there you were: herding four children around a home, all while making grilled cheeses, breaking up a fight, and negotiating nap time like it was nothing. For Malia (who, before the club, had always struggled with school and sports and every activity known to man), being good at something felt really, really nice.

Malia and Jonah made their way back to the yard.

“What? How come you get ice cream?” yelled eight-year-old Fawn, the oldest Gregory child, upon seeing Jonah’s chocolate-dipped cone. She angrily crossed her arms.

“Don’t worry, I brought enough for everyone,” said Malia, holding the box aloft.

“Not so fast. Everyone has to sit down before they can have some,” said Bree with authority. As one of five siblings, Bree was an expert at dealing with little kids and generally navigating chaos. Immediately, everyone sat, and Dot distributed the cones.

Malia also remembered a time—around the same point when boogers were enough to trigger a meltdown—when a gig like this would have driven her and her friends over the edge. But now they could watch four children and actually enjoy doing it.

As the small ones devoured their ice cream, Malia craned her neck to peer over the chain-link fence, trying to catch a glimpse of the neighbors. The house next door was small and blue, with a gray-shingled roof and some spindly evergreen trees dotting the backyard. To most anyone, it looked like a regular old house. But to Malia, it was a place of endless wonder.

It wasn’t the home itself that was magical, but the people who lived there, particularly one Connor Kelly (aka the only boy worth loving). That house was the place where he woke up each morning and played video games and ate waffles. Connor’s jeans—the very same jeans he casually stuck his hands in the pockets of—were somewhere inside, along with his backpack and his T-shirts and his bike and his toothbrush. The toothbrush that touched his beautiful smile. Malia shivered. It was almost too much to handle.

“Not yet,” said Malia. But there was still hope.

For years, Malia had watched Connor float through the halls of Playa del Mar’s public school system the same way her older sister watched the shoe sales at the local mall—with a laser focus. But now, thanks to the Gregory gig, the unthinkable had happened: Malia could observe him in his natural habitat. That is, if he ever came outside.

“MOM!” yelled the Gregory twins, at the sound of a car in the driveway.

Mrs. Gregory appeared at the gate, where a peaceful, controlled scene awaited her. This was the magic of babysitting. By this point, Jonah’s accident seemed like a distant memory. Any traces of sugar had been discarded. This was a skill they had learned over time—the ways of the artful cleanup. In the early days, the parents might return home to find their children spinning wildly, like sugar-addled tops. But today, all Mrs. Gregory saw were the smiling faces of her four beloved children and the three somewhat older children who had kept them alive and relatively happy for the last few hours.

“I’ll definitely be calling you again soon,” said Mrs. Gregory as she counted out a stack of crisp bills. “My sister invited me to a luncheon next weekend, and we’ll need someone to watch the kids.”

“We’d love to,” Bree added, nodding so vigorously that her dangling iridescent gemstone earrings twinkled in the light.

As the girls started down the driveway, Malia saw something from the corner of her eye. It was orange. It was moving. OH MY GOD IT WAS HIM.

The orange blob was none other than Connor Kelly, sauntering down his front lawn. The only thing standing between them was the Gregorys’ chain-link fence (and about a stratosphere’s worth of middle school politics, but really, who was counting?). Malia couldn’t breathe. Her excitement level was like she’d seen a pop star and a movie star and a YouTube star and an actual star from the sky, all at the same time.

“Hi!” Malia said, so softly she barely heard it herself. It reminded her of how sometimes, ...

"This smart, humorous tale should inspire girls to dream big, experiment, and problem-solve through challenges." —Kirkus 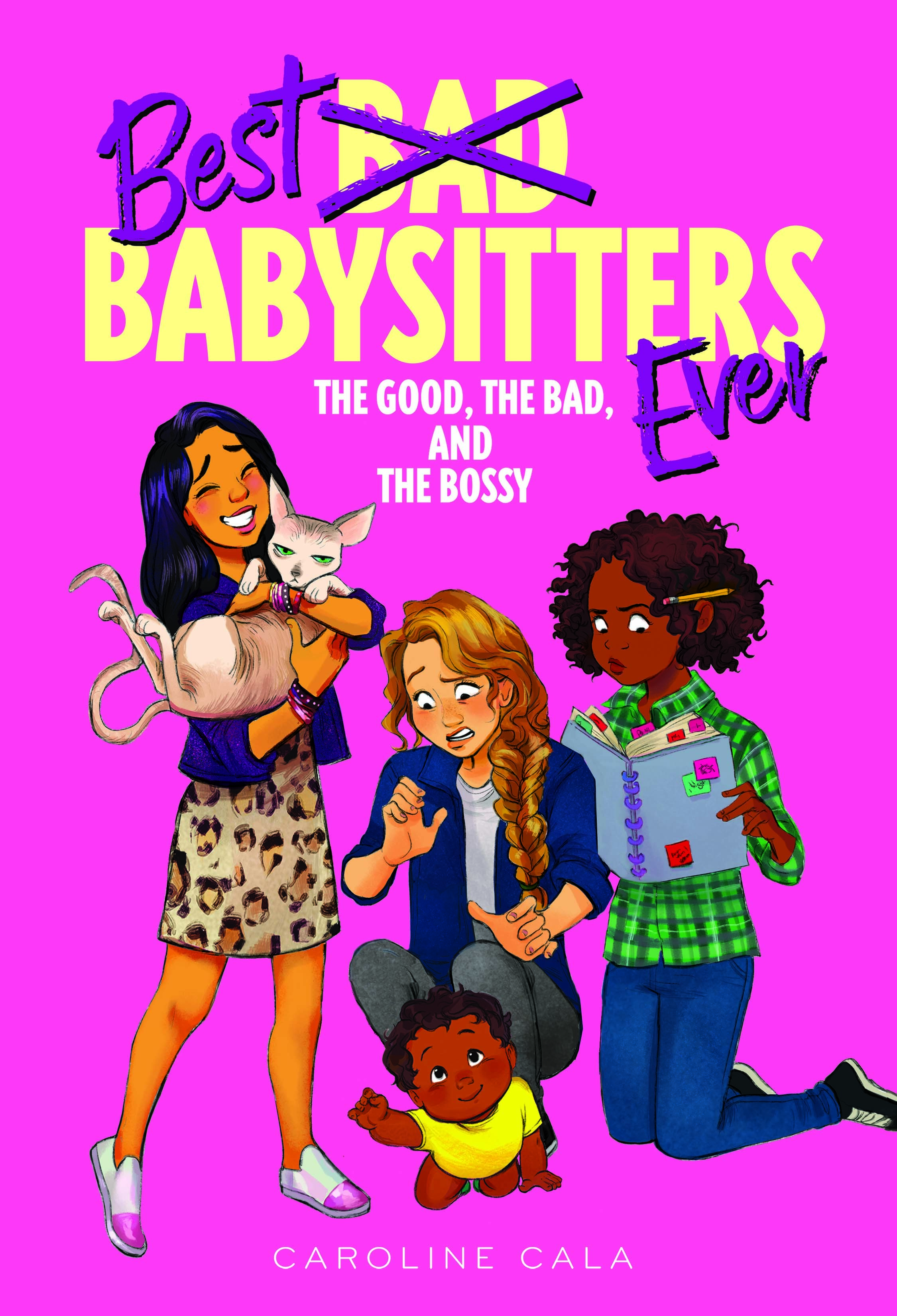