The Girl Who Could Not Dream

A funny and poignant story of unexpected friendship and dreams come true from Sarah Beth Durst.

Sophie loves the hidden shop below her parents' bookstore, where dreams are secretly bought and sold. When the dream shop is robbed and her parents go missing, Sophie must unravel the truth to save them. Together with her best friend—a wisecracking and fanatically loyal monster named Monster—she must decide whom to trust with her family’s carefully guarded secrets. Who will help them, and who will betray them?

Sophie had only ever stolen one dream.

She’d been six and curious, two not unrelated traits. The dream had been stored in a brilliant blue bottle with a gold-flecked stopper. It was the only unlabeled bottle in the batch, and she’d thought that meant it wouldn’t be missed.

She’d spotted it on the top shelf after her parents left (one to the grocery store and one to tend to a customer). She had to haul books downstairs from the shop and pile them on top of a stool before she could reach it. Stretching, she touched the bottle with her fingertips, knocked it off the shelf, and then caught it before it could shatter on the old stained counter below. It took precious seconds to wiggle the stopper out, and she chugged it down without hesitating.

She’d thought she’d see a swirl of mist first, like the squiggly fog that always came before a dream in a TV show, but instead she plunged instantly into the dream. One second she was in her parents’ workroom beneath the bookshop, and the next she was tucked into a bed with cupcake-pink ruffled sheets. For an instant, she thought it was her bed, even though she didn’t have pink sheets, but then she remembered who and where she was.

Sitting up, Sophie looked around curiously at the cotton-candy wallpaper and the shelves of toys. The owner of this room had a Barbie Dreamhouse and liked horses. A night-light in the shape of a pink unicorn cast a rosy glow over the room. Pink shadows stretched.

One of the shadows twitched.

And a shadowy monster crept out of the closet.

Sophie felt her heart beat deliciously faster. Slowly, so she wouldn’t startle the monster, Sophie scooted out from under the sheets. She waited.

The monster skittered left. It dodged right. Sophie pretended to look out the window at the moon, stuck between the pale branches of a tree. Out of the corner of her eye, she noted that the monster seemed to have several tentacles. She looked at it, wanting to count them, and the monster dived beneath the bed.

Lying flat on her stomach, Sophie leaned over the edge of the bed. She lifted up the dust ruffle. Moonlight swept under the bed. The monster huddled in the shadows. Its fur bristled like a cat’s.

It bared its teeth, three rows of shiny, sharp, shark-like teeth, and growled.

“Shh. It’s okay. I won’t hurt you.” She felt her heart patter inside her rib cage and wondered if it would hurt if the monster bit her dream self with those teeth. She guessed it would, but only until she woke up. “Come on out.”

The monster snapped its tentacles like whips, and Sophie scrambled back. Retreating to the pillows, she took several deep breaths. She told herself firmly that she shouldn’t be scared. This was what she’d wanted, after all, her very own dream.

Inching forward, she again leaned over the side of the bed. The monster waved its tentacles at her. “You have lovely tentacles,” Sophie said. “Like a furry octopus. Did you know that an octopus can open a jar with its tentacles? I read that once. I like books. Do you like books? My parents own a bookstore. It’s nice. We have lots and lots of books.” She kept her voice soft and even, as if she were luring out a stray cat. The monster lowered its tentacles. “That’s a good monster. You can come out.”

The monster scooted forward. Sticking its head out from beneath the dust ruffle, it looked up at her. It had overly large eyes like a lemur’s. Its pupils were the size of Sophie’s fists and ringed with gold.

“Are you a girl monster?”

It blinked at her. She decided that meant it was a boy monster. He inched out from under the bed. She counted six tentacles. He also had four tiny legs with sharp, curved claws. Squatting beside the bed, he kneaded the carpet with his claws.

“Are you an in-the-closet monster or an under-the-bed monster? The dream bottle wasn’t labeled, and we have lots of both. We even have a few on-the-ceiling monster dreams, but those aren’t as common.” She wasn’t supposed to talk about her parents’ dream collection. But since she was in a dream, talking to a dream creature, she decided the normal rules didn’t apply.

The monster crept farther into the moonlight. His fur was black with hints of red and blue in it. She thought he was iridescent black. She liked the word iridescent. She’d learned it just the other week.

“You have beautiful iridescent fur. That means you shine with different colors,” Sophie said. “You’re a very handsome monster.”

“It’s nice that you don’t have any slime. So many dream monsters are coated in goo.” She patted the blanket next to her. “Do you want to come up?”

He hopped onto the bed. He was about half her size, though if he stretched out his tentacles, she bet he’d be larger. Instead, he curled his tentacles underneath him in coils of fur. She wanted to pet his fur. She wasn’t sure she dared. He continued to watch her with his large lemur eyes.

“I bet the dreamer who thought you up was scared of cats,” Sophie said. “I’ve never had a cat. Or dog. Or any kind of pet. I’ve always wanted a pet. I wish you could be my pet.”

The monster nudged her hand with his nose. She felt her breath catch in her throat. He had so many sharp teeth that they couldn’t all fit in his mouth. A row of teeth stuck out beyond his gums. He wormed his head under her hand. His fur felt softer than cotton and smoother than silk. Sophie stroked his head and scratched behind his ears.

She lay down next to him, continuing to pet him. He began to snore, and Sophie bit back a laugh that bubbled up inside her. His snore sounded like a toy train. After a while, she fell asleep.

She woke to her parents’ screams.

Uh-oh, she thought. Sophie opened one eye and then the other. Her mother was, oddly, perched on top of a table next to the dream distiller. She held a broom and was brandishing it like a sword. Her father held a fire extinguisher with the nozzle pointed at her.

“It’s okay, baby, don’t be scared.” Mom’s face was chalky, as if she’d used powder instead of blush on her cheeks. Her voice sounded unusually shrill.

She was lying on the floor. Her head rested against a cabinet, and her feet were stuck in a pile of sponges and mops. She had the open and empty blue bottle in her left hand. Curled against her right side was a furry warmth.

* "This book is self-aware, playing with common fantasy tropes, thus reinvigorating the familiar underlying story of a loner having to learn to overcome her fears to save the ones she loves...A fun, fast read with broad appeal."

* "Readers will not want to stop reading this quirky, fast-paced adventure until reaching its satisfactory, heartwarming conclusion...Funny, warm, and highly imaginative."

"Durst makes the most of a truly creative premise in a novel filled with wit, empathy, and over-the-top dream moments come to life." 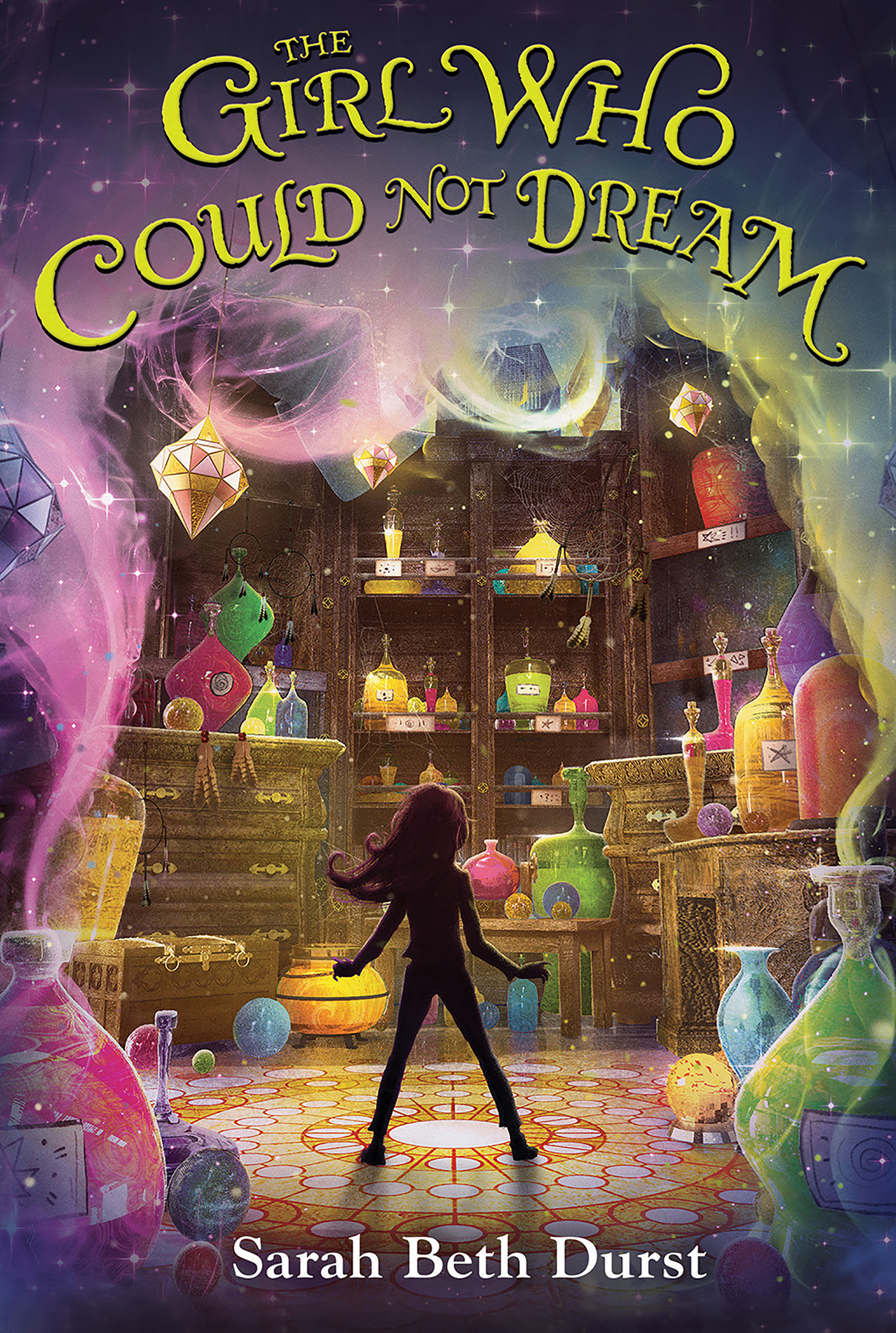