Simon Inescort is no longer bodily present in his marriage. It’s been several months since he keeled over the rail of a Nova Scotia–bound ferry, a massive heart attack to blame. Simon's widow, Lorca Pell, has sold their farmhouse to newlyweds Zachary and Muriel—after revealing that the deed contains a “ghost clause,” an actual legal clause, not unheard of in Vermont, allowing for reimbursement if a recently purchased home turns out to be haunted.

In fact, Simon finds himself still at home: “Every waking moment, I'm astonished I have any consciousness . . . What am I to call myself now, a revenant?” He spends time replaying his marriage in his own mind, as if in poignant reel-to-reel, while also engaging in occasionally intimate observation of the new homeowners. But soon the crisis of a missing child, a local eleven-year-old, threatens the tenuous domestic equilibrium, as the weight of the case falls to Zachary, a rookie private detective with the Green Mountain Agency.

The Ghost Clause is a heartrending, affirming portrait of two marriages—one in its afterlife, one new and erotically charged—and of the Vermont village life that sustains and remakes them.

About the author
Howard Norman

HOWARD NORMAN is a three-time winner of National Endowment for the Arts fellowships, and a winner of the Lannan Award for fiction. His novels The Northern Lights and The Bird Artist were both nominated for National Book Awards. He is also author of the novels The Museum Guard, The Haunting of L, What Is Left the Daughter,Next Life Might Be Kinder, and My Darling Detective. He divides his time between East Calais, Vermont, and Washington, D.C.

Zachary knew from her slightly lopsided smile, eyes squinted tight against tears as she stepped from the farmhouse porch, that Muriel’s dissertation defense had been strenuous. Muriel sometimes put her emotions on highest exhibit by exaggerating a suppression of them. “I got through it,” she said.

“Oh, I know you did more than that,” Zachary said. “Congratulations. You’ve worked so hard.” They had a good kiss. Anyway, she was now Dr. Muriel Streuth. He could also see that the drive in early-December sleet and on icy roads, from Medford, Massachusetts, home to their farmhouse in Calais, Vermont, had worn Muriel to a frazzle.

“How do you want to celebrate?” he asked.

Muriel removed her coat and draped it over a chair. “For starters,” she said, “a cup of tea in the bath.”

She kicked off her boots, crossed her arms, and, grasping its bottom hem, lifted off her sweater, which she carried into the library. She set her sweater on the rocking chair. She then walked along the wide wooden slats to the first-floor bathroom. She ran a hot bath. Japanese bath salts tinged the water an orange hue. She smiled at the sound of the Chopin nocturne Zachary placed on the old-school phonograph in the living room; they had quite a collection of vinyl albums. The nocturnes were what she often played, arriving home after the long drive, needing just to unwind and not think. Standing in the bathroom doorway, her peach-colored blouse half unbuttoned, her gray slacks on the floor, Muriel called toward the kitchen, “Zach, I only didn’t hug and squeeze you because I want to save every ounce of strength for later.”

In a few moments, Zachary set a steaming cup of cinnamon tea on the windowsill next to the bathtub. Muriel had been sitting on the rim, one hand monitoring the water level and temperature. She stood and turned off the faucet. She dropped her blouse, brassiere, panties, and socks to the floor, then slid into the bath.

“What a day for you,” Zachary said.

He picked up her clothes, carried them to the laundry room, and set them on top of the washing machine. Muriel’s clothes could wait. I knew that the volume of bath water, combined with what the wash cycle required, might strain the capacities of the artesian well. Probably not, but why risk an automatic shutdown of the pump, which was at 230 feet. The laundry room window displayed ostrich feathers of frost. Zachary went upstairs.

Watching Muriel and Zachary since I’d died and returned to this farmhouse, I have come to believe that certain evenings delivered them into each other’s arms, as if the passing hours themselves had it in mind all day. There was so much human urgency, but also something more, perhaps indefinable. At least I couldn’t define it. There just seemed a powerful sense of predestination about it. I’m sure that neither of them would be caught dead using the words “delivered them into each other’s arms.” That’s perhaps my own literary pretention at work. Muriel Streuth and Zachary Anders now own this 1845 farmhouse. Notice I did not say my former farmhouse. I am still in residence here. Things should be stated directly, don’t you think?

Now I must also mention MOTION IN LIBRARY. Muriel and Zachary had put in a state-of-the-art alarm system. There had been some robberies in the neighboring villages of Woodbury and Plainfield. Along with motion detectors, this system included highly sensitive smoke and carbon monoxide detectors. Since I wander freely through the farmhouse, there seemed no determinable logic as to why only the motion detector in the library kept registering a disturbance. It was occurring quite often. I figured it might somehow be a reaction to the metaphysics, or physics, or something, of my condition, and though I don’t unfailingly set off the MOTION IN LIBRARY alarm each time I enter the library when the alarm is set, when it does happen, a dispatcher at Onion River Security in Montpelier receives the MOTION IN LIBRARY signal. According to procedure, volunteer responders, in a predetermined order, are telephoned. The way Muriel and Zachary have it, first on the list are Jody and David, writers and translators, who live just around the curve of the dirt road. They are followed by Eric and Cathy, who both work in ecological conservation, then Erica, a radio programmer and private investigator, who lives halfway between the farmhouse and Route 14. Last to be contacted is Jasper Sohms, a retired high school math teacher, who lives in Plainfield.

"Howard Norman, who has always stood admirably apart, has reinvented the ghost story; in the process he has crafted a novel not only suspenseful but elegiac, consoling, and wholly absorbing."

—Jhumpa Lahiri, author of Interpreter of Maladies and Lowland

"In his ever-exquisite, lapidary prose, Howard Norman shows us in The Ghost Clause how we might best cherish our time, whether in this life or the next: through our restive, earthly passions, to the  heart-song of language; and by our deep devotions to other beings. This is a lovely novel indeed."

—Chang-Rae Lee, author of Native Speaker and On a Full Sea

"Who better than a dead novelist to narrative this tale of married life, a missing child, and a Vermont farmhouse ripe for the haunting? The Ghost Clause is a meditation on many kinds of mystery, not the least of which is the persistent ongoingness of love."

—Alice McDermott, author of Charming Billy and The Ninth Hour

"...he has a keen eye for the way loss uneasily sticks with those left behind. What opens as a ghost story turns out to be something of a love story instead...he still has a knack for finding emotional resonances in muted, unlikely scenarios."

"This is an astute, beautifully written novel."

"Thoughtful, elegiac, a good book to read by the fireside with a snifter of bourbon." 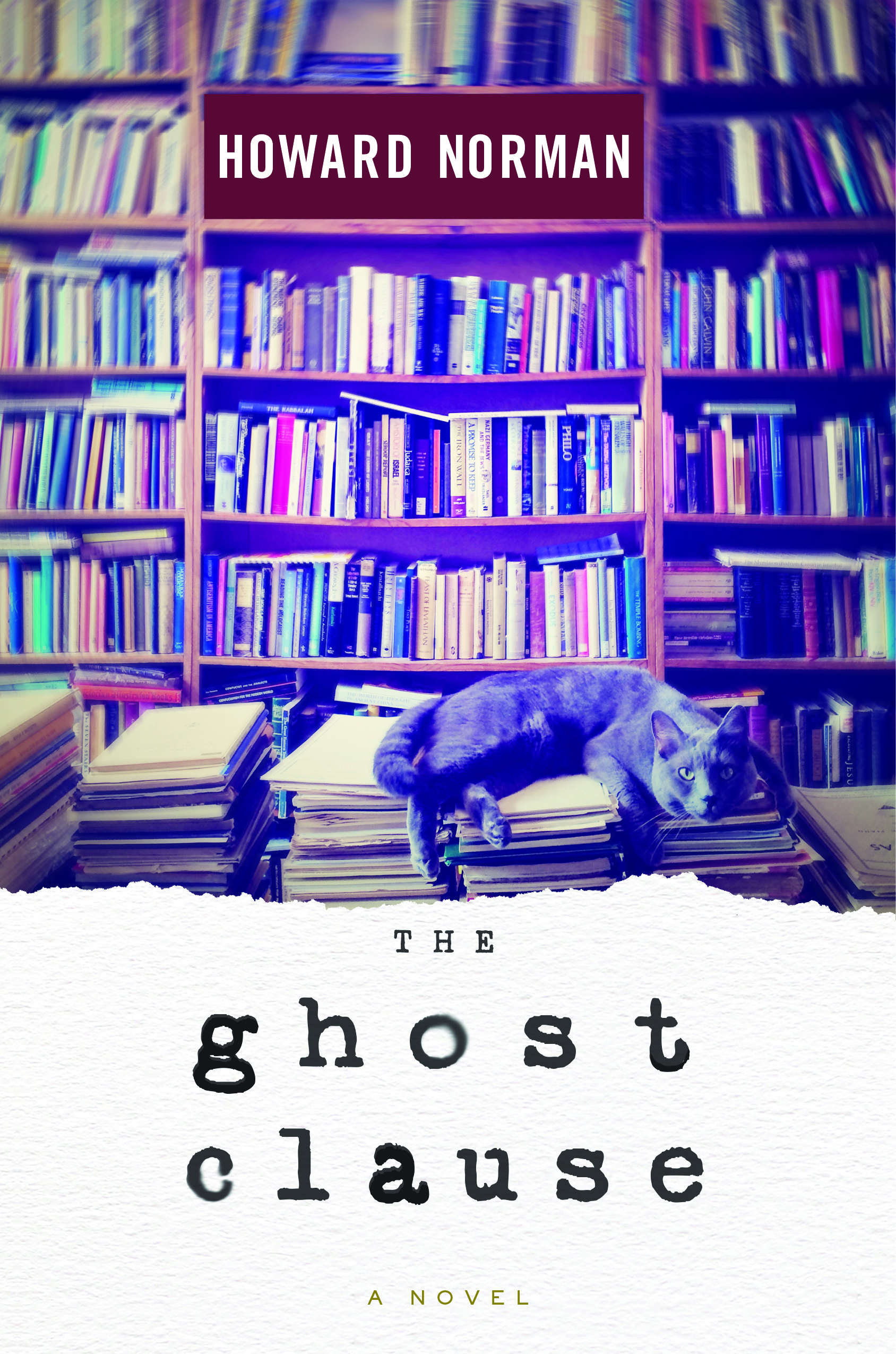