The Fifth to Die

In the thrilling sequel to The Fourth Monkey, a new serial killer stalks the streets of Chicago, while Detective Porter delves deeper into the dark past of the Four Monkey Killer.

Detective Porter and the team have been pulled from the hunt for Anson Bishop, the Four Monkey Killer, by the feds. When the body of a young girl is found beneath the frozen waters of Jackson Park Lagoon, she is quickly identified as Ella Reynolds, missing three weeks. But how did she get there? The lagoon froze months earlier. More baffling? She’s found wearing the clothes of another girl, missing less than two days. While the detectives of Chicago Metro try to make sense of the quickly developing case, Porter secretly continues his pursuit of 4MK, knowing the best way to find Bishop is to track down his mother. When the captain finds out about Porter’s activities, he’s suspended, leaving his partners Clair and Nash to continue the search for the new killer alone.

Obsessed with catching Bishop, Porter follows a single grainy photograph from Chicago to the streets of New Orleans and stumbles into a world darker than he could have possibly imagined, where he quickly realizes that the only place more frightening than the mind of a serial killer is the mind of the mother from which he came.

About the author
J. D. Barker

J.D. BARKER is the internationally best-selling author of Forsaken, a finalist for the Bram Stoker Award for Superior Achievement in a First Novel, and winner of the New Apple Medalist Award. His work has been compared to Stephen King, Dean Koontz, and Thomas Harris. His 4MK Thrillers, The Fourth Monkey and The Fifth to Die, were released in June 2017 and June 2018 respectively. He has been asked by the Stoker family to coauthor the forthcoming prequel to Dracula due out in fall 2018. His novels have been translated into numerous languages and optioned for both film and television. Barker currently resides in Pennsylvania with his wife, Dayna, and their two dogs, both of whom sit outside his office door daily, eagerly awaiting his next novel.

It swirled around him deep and thick, eating the light and leaving nothing behind but an inky void. A fog choked his thoughts ?— ?the words tried to come together, tried to form a cohesive sentence, to find meaning, but the moment they seemed close, they were swallowed up and gone, replaced by a growing sense of dread, a feeling of heaviness ?— ?his body sinking into the murky depths of a long-forgotten body of water.

Had to open his eyes.

They fought him though, held tight.

A pulsing pain behind his right ear ?— ?at his temple too.

“Try not to move, Sam. Wouldn’t want you to get sick.”

The voice was distant, muffled, familiar.

Porter was lying down.

Cold steel beneath the tips of his fingers.

He remembered the shot then. A needle at the base of his neck, a quick stab, cold liquid rushing under his skin into the muscle, then ?— ?

Porter forced his eyes to open, the heavy lids fighting him. Dry, burning.

He tried to rub them, his right hand reaching out only to be pulled back when the chain at his wrist went taut.

His breath caught, and he forced himself to a sitting position, his head spinning as the blood rushed out. He almost fell back.

“Whoa, easy, Sam. The etorphine will work out of your system quickly now that you’re awake. Just give it a minute.”

A light blinked on, a bright halogen aimed squarely at his face. Porter squinted but refused to look away, his eyes fixed on the man beside the light, the dull, shadowed shape.

“Bishop?” Porter barely recognized his own voice, the dry gravel of it.

“How you been, Sam?” The shadow took a step to his right, turned over an empty five-gallon paint bucket, and sat.

“Get that damn light out of my eyes.”

Porter yanked at the chain on his wrist ?— ?the other end of the handcuffs rattled around a thick pipe ?— ?water, maybe gas. “What the fuck is this?”

Anson Bishop reached over to the light and turned it slightly to the left. A shop light, mounted on some kind of stand. The light struck a cinder-block wall with a water heater in the far corner, an old washer and dryer along the far side.

Porter tugged at the chain again.

Bishop gave him a half smile and shrugged.

The last time Porter saw him, his hair was dark brown and close cropped. It was longer now, and lighter, unruly. Three or four days of scruff marred his face. His business casual attire was gone, replaced by jeans and a dark gray hoodie.

He couldn’t change his eyes, the coldness behind them.

Bishop pulled a small spoon out of his back pocket, a grapefruit spoon, and twirled it absent-mindedly between his fingers, the serrated edge catching the light.

Porter didn’t acknowledge the utensil. Instead, he looked down, tapping the metal beneath him with his index finger. “Is this the same kind of gurney you chained Emory to?”

A dark red stain pooled out from under the gurney, a deep blemish on the filthy concrete floor. Porter didn’t ask about that. His fingers came away sticky after touching the underside of the metal. He didn’t ask about that, either. A few shelves lined the wall to his left, stacked full with random painting supplies ?— ?cans, brushes, tarps. The ceiling above was constructed of wood, two-by-six boards spaced about sixteen inches apart. Exposed electrical wiring, water pipes, and air ducts filled the space between. “This is a residential basement. Not a big house. Older, though. That pipe above your head is shielded in asbestos, so I wouldn’t recommend chewing on it. I’m guessing the place is abandoned, because your light there is plugged in to an extension cord running upstairs to?.?.?. what, some kind of battery pack? Not a generator. We’d hear that. You didn’t bother with any of these plugs along the wall, so that tells me the power isn’t on in this place. It’s also cold as balls. I can see my breath, so the heat isn’t on. Again, that points to an abandoned house. Nobody wants to risk frozen pipes.”

Bishop appeared pleased with this, a thin smile edging his lips.

Porter continued. “Wall to wall, this house is fairly narrow. That suggests a shotgun home. Considering you wouldn’t want to be in one of the trendier neighborhoods where residents have Starbucks, the Internet, and tend to report known felons to the police on sight, I’d say you’re more likely to stick to the West Side. Maybe someplace like Wood Street. A lot of empty houses on Wood.”

With his free hand, Porter reached for his gun under his thick coat but found only the empty holster. His cell phone was gone too.

Wood Street was a good fifteen-minute drive without traffic from his apartment on Wabash, and Porter had been a block from his house when he felt the stab at his neck. Of course, this was all a complete guess, but Porter wanted to keep Bishop talking. The more he talked, the less he thought about that spoon.

The throbbing in Porter’s head settled behind his right eye.

“Aren’t you going to try and convince me to turn myself in? How you can spare me from the death penalty if I cooperate?”

This time Bishop did smile. “Hey, you want to see something?”

Porter would have said no, but he knew whatever he said didn’t really matter. This man had a plan in mind, a purpose. Snatching a Chicago Metro detective off the street was not a risk one would take without a good reason.

He could feel his key ring in his right front pocket. Bishop had left it when he took his gun and phone. He had a handcuff key on his key ring, and most handcuffs took the same key. While he was a rookie, he was told this was because the person who cuffed a perp most likely wouldn’t be the same person who would later uncuff the perp. A suspect could easily be transferred two or three times during booking. That in mind, they were taught to take away keys when patting someone down, all keys. Any criminal worth their salt owned their own handcuff key on the off chance some rookie forgot to check. Porter would have to remove the key ring from his right pocket, somehow maneuver it to his left hand, unlock the handcuffs, and take down Bishop before the man could cross the five feet that separated them.

“J.D. Barker is a one-of-a-kind writer and that’s a rare and special thing. Stephen King comes to mind and Lee Child, John Sandford. All one-of-a-kinds. Don’t miss anything J.D. writes.”

"The craftsmanship here is outstanding. The story is intricate without being annoyingly so; the characters are sharply defined; the dialogue is fluid; and the ending—well, let’s just say that when the book ends, it’s like a speeding train slamming into the side of a mountain: unexpected, abrupt, painful. The story is scheduled to conclude in the next book, which better get here soon."

"Well-written, haunting, and insanely addictive. . . Bottom line, this is what a crime thriller is supposed to look like. Think Stephen King meets Michael Connelly — J.D. Barker was born to write crime thrillers, and The Fifth to Die is his latest masterpiece." 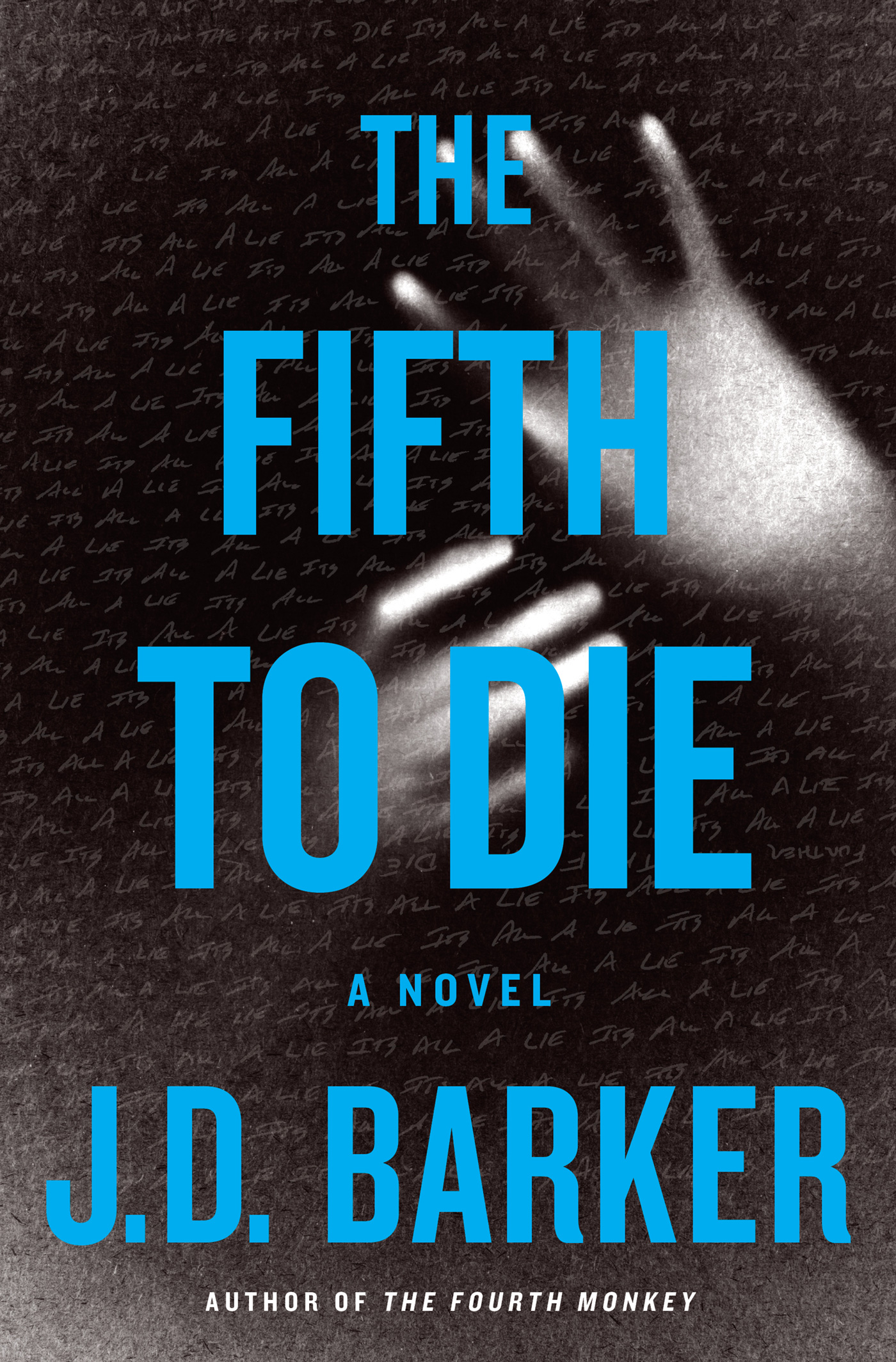