The Farm: Rustic Recipes for a Year of Incredible Food

One hundred and fifty recipes revolving around the author's life on the family farm.

When Ian Knauer was a cook in the Gourmet test kitchen, he quickly became known for recipes so stupendously good that they turned the heads of the country’s top food editors—effortless combinations that made the best of seasonal produce or treats from the Pennsylvania farm that has been in his family since the eighteenth century.

In The Farm, Knauer brings his creations to your kitchen. From Cold-Spring-Night Asparagus Soup to Brick Chicken with Corn and Basil Salad, the 150 recipes in this book will help you make the most of your market, garden, or CSA. They are fresh, modern spins on American classics, with ingredients anyone can obtain. Each one is simple, distinctive, and satisfying, getting the best food to the table in the least amount of time. They are both homey and sophisticated.

You’ll find recipes that incorporate all parts of the vegetable, like Pasta with Radishes and Blue Cheese, which incorporates the radish leaves as well as the root, and spritely Swiss Chard Salad. You’ll learn how to make great food from simple ingredients you have on hand, like Potato Nachos. You’ll discover recipes for less-familiar produce from your market or your backyard, such as Chicken with Garlic Scape Pesto and Dandelion Green Salad with Hot Bacon Dressing.

Many of these recipes have been in Knauer’s family for generations, like Pennsylvania Dutch-Style Green Beans or Cloud Biscuits. You won’t want to miss his expertly tweaked renditions of his mother and grandmother’s desserts: Strawberry Cream Cheese Pie, Blueberry Belle Crunch, and Mary’s Lemon Sponge Pie.

Whether you want to learn how to roast a pig, make your own hot sauce, or brew hard cider, The Farm brings artisanal cooking home, even as Knauer’s vivid stories trace a year in the seasons of the farm.

About the author
Ian Knauer

A former food editor at Gourmet, Ian Knauer wrote extensively for the magazine and its website and also co-hosted the magazines awarding winning television series, Diary of a Foodie, and Adventures with Ruth. He now develops recipes for the Food Network, including for the show The Next Food Network Star, and the Cooking Channel. He contributes articles and recipes to Men's Health, Men's Journal, theAtlantic.com, Bon Appétit, Fine Cooking, AOL Food, Salon.com., and Gillt.com. He blogs at http://bigcitycountryboy.blogspot.com.

Just off a narrow, winding rural route in Pennsylvania in a small graveyard, a headstone, etched entirely in German, marks the plot of Johann Christopher Knauer, who died in 1769. He and his family came to their new land to start fresh and named the village Knauertown. I’ve spent most of my weekends at what is still called the Knauer farm: it has become the only place I really consider home.

The driveway snakes in from the road, past the pond with a rickety dock that wobbles and creaks under the slightest weight, and up the hill toward the house. Somewhere around the gate, I let the dog out of the car. He runs and rolls through the tall grass as I slowly navigate the sharp turns to make my way to the farmhouse. The driveway takes several minutes to travel and is completely transporting. It feels very distinctly like going back in time. The white stucco house, well over a century old, overlooks the pond. Behind the house, fields of green, waving grass stretch up the hill until they are met by the tree line. As I step out of the car, I notice how clean the air feels in my lungs. I breathe it in slowly, letting its freshness soak through me. When I am at the farm, I feel as if I am miles — and centuries — away from the rest of the world.

When I was in my teens, I hated coming here. Mowing the four-acre lawn was not how I wanted to spend my Saturdays. Neither was chopping cords upon cords of firewood, or helping my father repair the century-old slate barn roof, or whitewashing the old chicken coop, pigpen, or outhouse. Or helping my grandfather with his garden. Now those moments are all I need to be happy. I’ve come to realize that I am only a small link in the history of the farm that my family has considered home for many, many generations. It’s a rare opportunity, and I am lucky to have it. My grandfather felt the same way.

I can’t remember a moment when he wasn’t at the farm. He was stoic and gruff and, even as an old man, seemed larger than life. But he had a tender side, and more than anything else, he enjoyed spending his time at the farm with his family. I remember walking up the hill with him as a very young boy to his garden where we picked strawberries. His enormous hand seemed to swallow mine as he lifted me by one arm over the garden fence and landed me gently onto the dirt, my feet surrounded by the bright red berries of early summer. He was loving, gentle, and strong with all his grandchildren. I am the eldest of twenty-four cousins.

Every summer he would grow his strawberries along with corn, cantaloupe, and so much more. There were more vegetables than we could ever eat. There was more work to do than we could ever finish. And many days he would call me, or my sisters, in from a sun-scorched field for a break.

My sister Cecily remembers one afternoon in August when our father dropped her off to mow the lawn. Our grandfather told her it was too hot, and she’d have to spend the afternoon sitting on the porch swing instead, chatting with him. She sat next to him, her legs dangling in her cutoff jeans and T-shirt. He wore, as he always did, long khaki work pants and a tucked-in long-sleeved white shirt. They sat and swung, sometimes in conversation, sometimes in silence, for hours. Later that day, when my father asked Cecily in a scolding tone why the grass was still tall, our grandfather scolded him in turn. He said the work would always be there. What he meant was that he would not. He was right on both accounts.

A lot changed during my third decade with the farm. The fields stood unplowed and uncultivated. No one could figure out how to fill the emptiness. The house and the barn felt hollow. Cousins and siblings moved away for college or work, and the farm waited. But change that feels a long time coming can happen in an instant. I recall the instant it happened for me.

One spring, one of our aunts asked for my help planting a few fruit trees. I remember noticing a familiar warmth in the late April morning breeze as I dug holes in the field for those young trees. Near the ancient apple trees that have been growing there for well over a century, we planted a dwarf apple, an Asian pear, a Hosui pear, and even a fig tree. As we placed the fruit trees in the ground, I could feel a sudden change in the way I felt about the farm. It’s a reciprocal sort of place that gives back to me what I’ve given to it, and tamping cool earth around the trees’ roots seemed to usher in a brand-new era. It’s one in which I have grown closer to the family, the place, the garden, and the beautiful yet sometimes difficult lessons they have to teach me.

The history of the farm can be felt at every turn and every corner. Function and purpose have been the forces behind over a century of landscape decisions, and each generation has added their thumbprint to the face of the property. My father and his siblings have worked hard to preserve the outer edge of the woods, negotiating with preservation groups to enable the natural forest to live on. Our grandfather planted rows of yews, 300 yards long and 20 feet wide, that provide shelter and a haven for deer. He repaved the driveway to avoid the natural streams and dug out the low wetlands to create a spring-fed pond. He planted many trees. He poured himself into improving this place without encroaching on its history.

Thousands of rocks piled on top of thousands more line the fields of the farm. They work to keep the trees in the woods. They’ve been working at it for well over a hundred years, since they were piled there, by hand, the backbreaking labor of our ancestors who cleared these fields. They built the barn with rocks from the field, and the farmhouse. And the foundations of the old chicken coop, the pigpen, and the wagon shed. Then with the thousands and thousands of rocks still left, they built the wall. Now, in the fields, there are no rocks to be found. Rockless fields are perfect for gardens, like the one my sisters and I decided to plant this spring.

Since our grandfather grew too old to garden, the fields had not been used to farm anything except the hay that we give to a local farmer in exchange for his cutting it. Our grandfather favored beets, wheat, and potatoes. I remember watching him tow a small plow through the potato plants when I was still too young to help, the creamy-white spuds spilling out of the ground, tumbling into the sunlight. My first potato crop was his last. I called Cecily on the phone early one January to propose planting a garden together. Before I could complete the thought, she started to tell me her memories of our grandfather’s garden. She told me she’s been searching, in vain, for cherry tomatoes that could live up to her memory of her childhood, when she would stand next to the plants for hours and strip them of their fruits, popping each little tomato in her mouth, one at a time. We decided to give it a try.

The prospect of a summer brimming with fresh vegetables of every variety may have gotten us a little too excited. Instead of starting with a reasonable number of tomato plants for three small families, my sisters and I grew sixty, of which fifty-six made it through the season. We had so many tomatoes that we couldn’t give them away. After eating them raw off the plants, in every meal for a month, canning, freezing, and dehydrating them, we still could have built a wall of tomatoes comparable, it seemed, to the wall of rocks that lined the fields.

We planted too much zucchini, too. And too much fennel, hot chile peppers (Scotch Bonnet, fatali, malagueta, chocolate habanero, peach habanero, and poblano),... 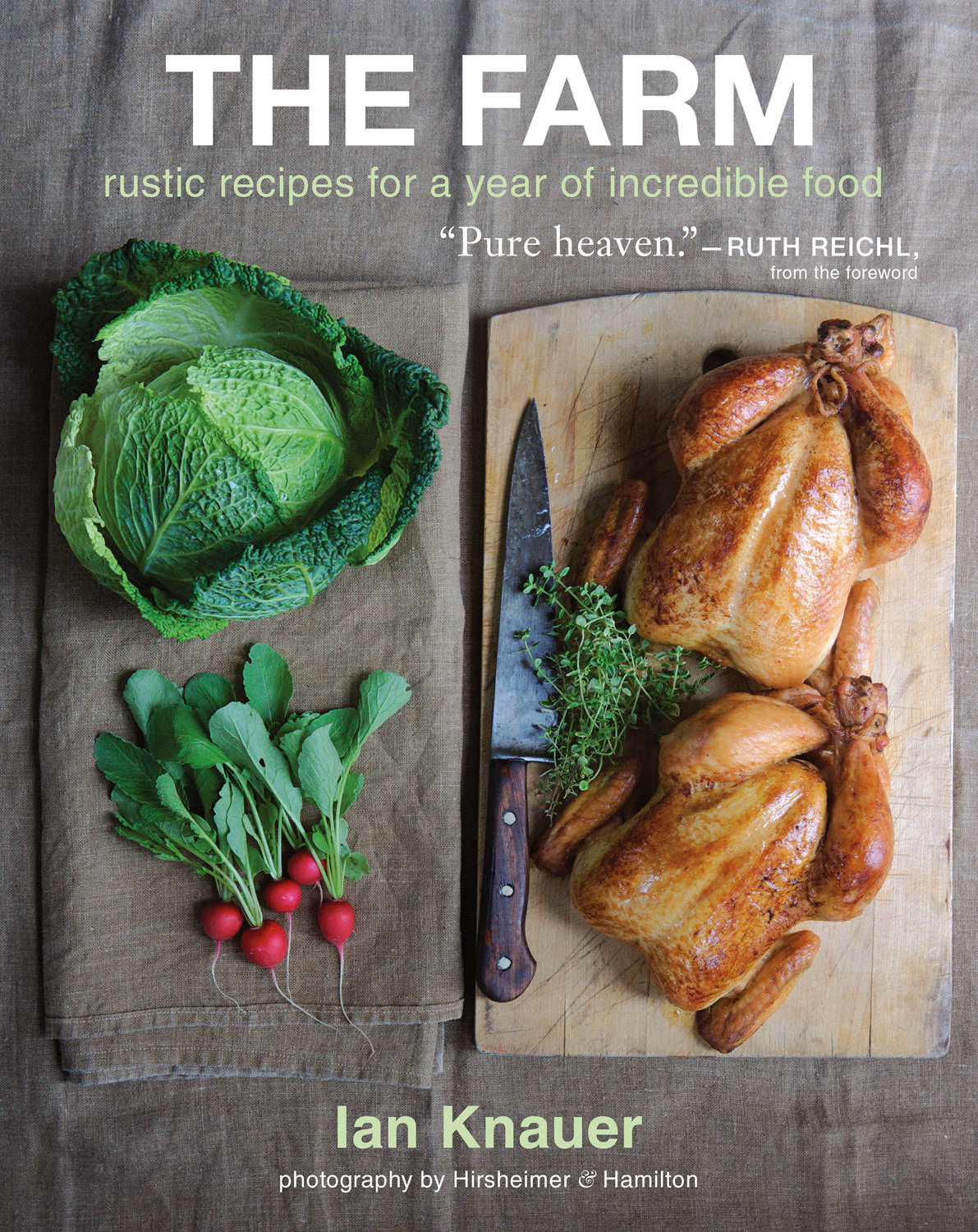