A mesmerizing tale about a fifteen-year-old girl who moves to a town where every seven years there is a disappearance, and she must find a way to break the curse before it's too late.

What if the ordinary things in life suddenly…disappeared?

Aila Quinn’s mother, Juliet, has always been a mystery: vibrant yet guarded, she keeps her secrets beyond Aila’s reach. When Juliet dies, Aila and her younger brother Miles are sent to live in Sterling, a rural town far from home—and the place where Juliet grew up.

Sterling is a place with mysteries of its own. A place where the experiences that weave life together—scents of flowers and food, reflections from mirrors and lakes, even the ability to dream—vanish every seven years.

No one knows what caused these “Disappearances,” or what will slip away next. But Sterling always suspected that Juliet Quinn was somehow responsible—and Aila must bear the brunt of their blame while she follows the chain of literary clues her mother left behind.

As the next Disappearance nears, Aila begins to unravel the dual mystery of why the Disappearances happen and who her mother truly was. One thing is clear: Sterling isn’t going to hold on to anyone's secrets for long before it starts giving them up.

About the author
Emily Bain Murphy

Emily Bain Murphy was born in Indiana and raised in Hong Kong and Japan. She graduated from Tufts University and has also called Massachusetts, Connecticut, and California home. She is the author of The Disappearances and lives in the St. Louis area with her husband and two children. Twitter: @EBain Instagram: @emilybainmurphy

I want something of hers.

There’s a teacup downstairs, the last one she used before she died. She didn’t finish her chicory coffee that morning, and what she left stained the porcelain in a faint ring. Her lipstick remains smudged in Red Letter Red along the rim. It’s been three weeks, and I still haven’t been able to wash it away.

But I shouldn’t choose the teacup. Nothing fragile is going to survive today.

“Aila?” Cass opens my bedroom door, her white blond hair pinned up in a plait, her wide eyes darker than normal. “Your father says I can come with you to the train station, but we have to leave in five minutes.”

“I’ll be ready,” I say softly. “I would be more worried about Miles.”

She nods and disappears back into the hallway. Her footsteps fall on creaking boards, and then the house returns to its solemn hush, so quiet you can almost hear the dust settle. As if we have all already left it.

I go to my parents’ room.

It’s been tidied since the last time I was here, the day of my mother’s memorial. Now the bed is made. All the flowers have been cleared away. Her vanity is free of her compacts and even the precious glass vial of Joy perfume she always displayed but hardly ever wore. I open her drawers, run my fingertips over her jewelry, but it’s all tangled and gaudy, and I want to leave it there, just as she left it. As if she could come in at any moment and clip on her big ugly earrings, as bright and jagged as suns.

I turn to the bookshelf. It, too, has been sorted, but I prefer the way it used to look, when the books were all jumbled and wedged in at odd angles, threatening to fall onto my feet.

My eye catches a large leather volume, its spine dwarfing all the others. I’ve never seen it before. I kneel down in front of it, my knees finding the threadbare place where the rug has worn almost through to the floor.

I pull out the book and flip through the pages. They whisper against my fingers, thin and delicate, like moth wings. It is Shakespeare, a collection of his plays and poems, and my mother’s handwriting is everywhere in it, littering the margins and cluttering the white gaps between sentences in different-colored ink. The pages are yellowing, as if Mother has had this book for a long time. I wonder where it’s been hiding until now.

An envelope is taped to the back cover. It is blank, and unsealed, and there is a note inside.

“Aila! Miles!” Father’s voice rings out from the kitchen.

The note was written recently; I can tell by the way her handwriting shakes, like it did when she was nearing the end. It says:

Stefen: You will find what you asked for within this. I will always love you.

My attention snags on the two names. Because the first one does not belong to my father. And the second, though it is definitely my mother’s handwriting, was not her name. My mother was the other well-known Shakespeare heroine. The one who also died young.

“Aila!” my father calls again. This time it’s more of a warning.

Leave it, I think. You don’t even like Shakespeare.

And maybe I don’t want to know who this Stefen is.

I put the book back on the shelf and decide that I want the teacup. It is my mother just as I remember her, safe and familiar, and it is still marked by her touch. I’ll bring it even if I have to hold it on my lap, cupped in my hands like a butterfly for the entire journey.

I hurry down the narrow stairs, which seem to slope more and more to the right each year. I’ve never lived anywhere but this house—?which we fondly call “the Tilt”—?and I know just where to place my hand on the banister to keep my balance and where to step so the stairs don’t creak. When I reach the landing, I hear my next-door neighbor, Mrs. Reid. She’s in the kitchen with Father, taking final instructions for watching over the Tilt while we’re gone. She’s opening drawers and closing them, and I’m sure she’s the one who organized my mother’s books. Maybe out of guilt.

“I’m sorry, again, Harold, that we aren’t able to take the children,” she says. I pause on the staircase, in the shadows. All I can see are her stockinged calves and the worn leather of her pumps, but I picture her lips pursing down, her white hair wispy and always looking as though it’s being swept heavenward by the wind. “With Earl’s health,” she continues, “I just didn’t feel that we could manage them both.”

She means that she would have taken me, but not Miles. She doesn’t want to be responsible when he inevitably steals something or sets a fire. The creases in Mrs. Reid’s pumps deepen as she shifts her weight. “I thought someone else in town would surely be able to help, but . . .”

“Well, thankfully, we’ve found other arrangements,” Father says stiffly. Then he turns away to yell again, but I appear in front of him before he can say my name.

“I’m here,” I say. My eyes fall from Mrs. Reid’s overly rouged cheeks to her hands, where she’s been anxiously fiddling with something. A tea towel embroidered with green leaves—?and my mother’s teacup, scrubbed shiny clean.

I swallow. “I forgot one thing,” I say, turning and running back up the stairs. I touch my mother’s dresses one more time, hanging in neat, still lines in the closet, knowing they will be packed in storage or given away by the time I return. Then I grab the book of plays, stuffing it into my knapsack without another thought.

Father drives us to the train station in our mud-streaked Studebaker—?he and Miles in the front and Cass and me in the back seat, my knapsack with the book in it lying heavy on the seat between us. “Think Mrs. Reid can handle the Tilt while we’re away?” Father asks. He smiles at me in the mirror and reaches over to ruffle Miles’s hair, but Miles just stares straight ahead. As we pull away, I don’t let myself look at the browning dahlias in Mother’s flower boxes.

Everything is in motion when we arrive at the station, as if the air itself were anxious. Posters flutter on the walls, pigeons flap and peck, tow-white strands of Cass’s hair whip loose from her braid. She helped me set my wave this morning because I’ve always liked the way she does it best, but I can already feel it starting to fall. ...

A Bookish Must Read YA Book of the Summer

A Bank Street Best Children's Book of the Year, 12-14 category

"The Disappearances is a delicious mix of mystery, fantasy and romance." —Bookpage

"At its heart, The Disappearances is a carousel of sentimental acts, of regret, the many kinds of love, the people we love, and the ways people, places, and things never truly leave us even if they’ve been taken. The adventure to unravel the riddle of The Disappearances made my heart race."—Ravenous for Reads

"How do we find the words to emphasize just how much we loved and enjoyed this novel? ‘The Disappearances’ had us captivated within it’s spell from the very first page... was just beautiful, heartbreaking and irresistible...We definitely recommend this read and we are warning you, remember the name ‘Emily Bain Murphy’ as she is a rising author who will just leave you in awe, page after page! —Pocket Full of Pages

"Thick with mystery, buried secrets, and magic, nothing is safe in The Disappearances. Be careful, or you might lose yourself in this strange and wondrous world, where stars go missing, reflections don’t exist, and the question, how much would you sacrifice for love? is given entirely new meaning. I adored this book!"–Stephanie Garber, New York Times bestsellingauthor of CARAVAL

“The Disappearances is purely poetic—a beautifully woven story with enough heart to take on its own life.”—Lindsay Cummings, New York Times bestselling author of THE MURDER COMPLEX

"The Disappearances is a dazzling debut, as glimmering as the Variants themselves, with a haunting mystery, wondrous world building, and a finely wrought family at its heart. I adored it." —Jessica Spotswood, author of The Cahill Witch Chronicles

"The riddle behind the town’s curse is an intricate and surprising one, and readers will happily join the clever and witty Aila on her hunt for clues." —Bulletin

". . . Murphy’s debut is no doubt ambitious . . . expertly woven world, spun with secrets, lush with literary allusion, and shimmering with magic (quite literally), is a place many readers will happily disappear into." —Booklist

"The Disappearances is a book of wonder and mystery by first time novelist, Emily Bain Murphy. It is well crafted and the plot is memorable and complex. Shakespeare’s words help solve the mystery, leaving the reader with a sense of hope as well as awe. This book should appeal to young adults and adults. The eloquent writing style and the well-researched inclusion of historical details make it memorable. Aila and Miles often use one word to summarize an experience, calling it a finishing word. My finishing word after reading The Disappearances is sublime."--Assembly on Literature for Adolescents of the NCTE, an ALAN pick Nov/Dec 2016 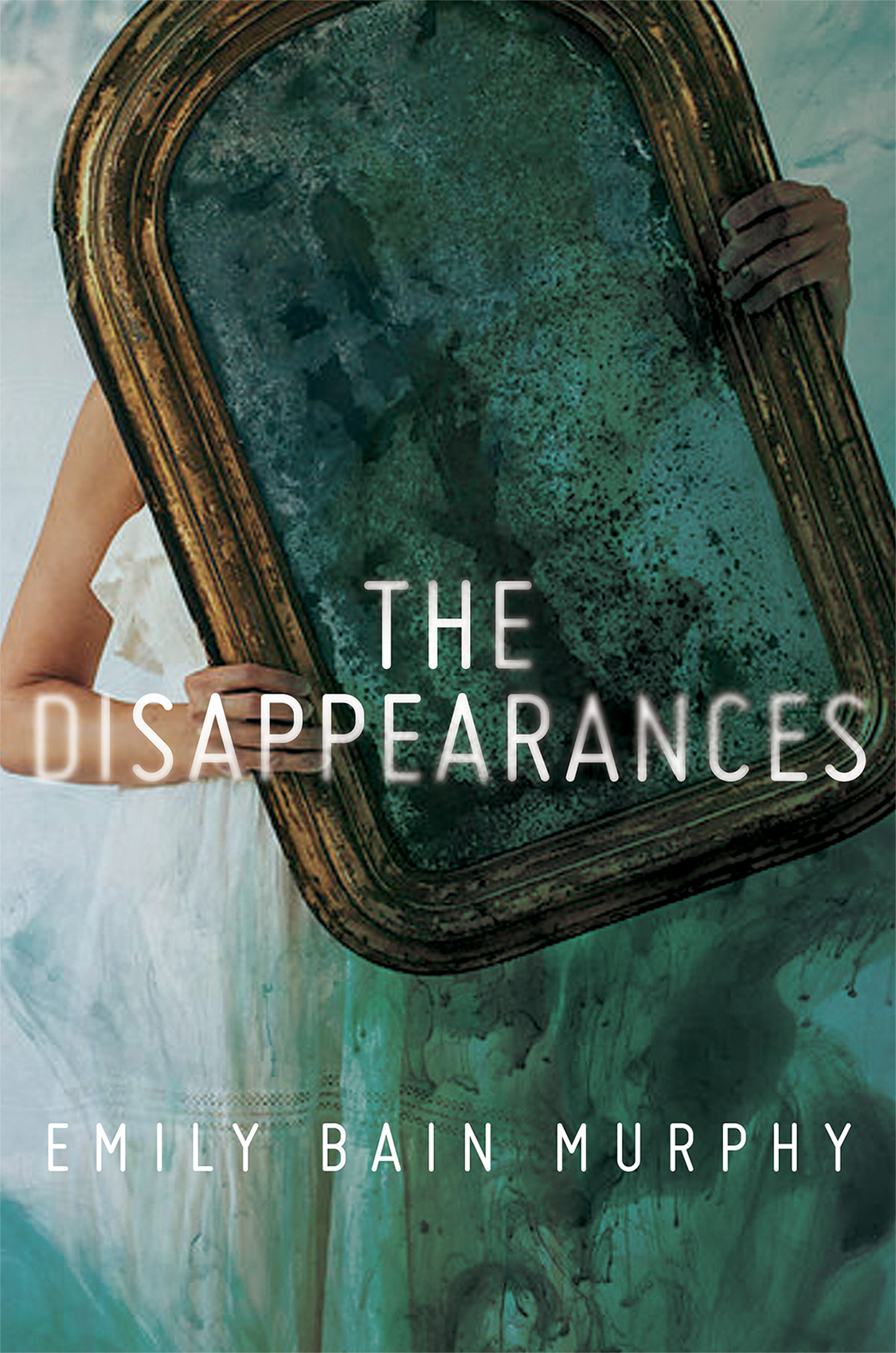