The Coffin Quilt: The Feud between the Hatfields and the McCoys

Fanny McCoy has lived in fear and anger ever since that day in 1878 when a dispute with the Hatfields over the ownership of a few pigs set her family on a path of hatred and revenge. From that day forward, along the ragged ridges of the West Virginia-Kentucky line, the Hatfields and the McCoys have operated not withing the law but within mountain codes of their own making. In 1882, when Fanny's sister Roseanna runs off with young Johnse Hatfield, the hatred between the two clans explodes.

Fanny McCoy has lived in fear and anger ever since that day in 1878 when a dispute with the Hatfields over the ownership of a few pigs set her family on a path of hatred and revenge. From that day forward, along the ragged ridges of the West Virginia-Kentucky line, the Hatfields and the McCoys have operated not withing the law but within mountain codes of their own making. In 1882, when Fanny's sister Roseanna runs off with young Johnse Hatfield, the hatred between the two clans explodes.

As the killings, abductions, raids, and heartbreak escalate bitterly and senselessly, Fanny, the sole voice of reason, realizes that she is powerless to stop the fighting and must learn to rise above the petty natures of her family and neighbors to find her own way out of the hatred.

I asked my brother Tolbert about our sheep once, why they do like they do, being on the one hand so brave the way they spend weeks a-wanderin' in the mountains, and on the other hand so meek.

It was the time me and Tolbert were sent by Pa to fetch my sister Roseanna home, after she first run off. I was staying with Tolbert and Mary for a spell because my sister Alifair had tried to kill me again. For the third time. This time she held my head under the pump in the yard until I near drowned, because I'd left school without permission. Once before she spilled hot bacon fat on me, which she said was an accident. I had to wear a cut potato bound on my arm for a week. Another time she switched my legs until I couldn't walk. Both times for sassing her. Alifair is the oldest girl, and as such demands respect. And Ma and Pa turn a deaf ear when I say she's trying to kill me. But they know it to be true. Else why would they send me to live with Tolbert for a spell to get me away from her?

The why of it nobody has figured. Ma says Alifair has the light of holiness. Isn't she working at church with the healing group? She hasn't healed anybody yet, but she's darned near killed me. I think she has powers, all right. Evil. But the good part is I get to stay with Tolbert and Mary when Alifair's light of holiness gets too bright. Tolbert is my favorite brother, not only because he cusses a lot in public and gets fined a dollar a cuss for it, but because he likes to dance and sing, and fight, too. His pebble in Mama's prayer garden is always on the side of the damned. It never bothers Tolbert any.

In his house you can read Oliver Twist of a Sunday without Mama saying you'd burn in hellfire forever for violating the Sabbath. And Mary treats me like I was near grown. I know they want me to live with them regular-like. Tolbert asked Pa once if I could. They'd send me to school, teach me to observe God's laws, take me to Sunday Meeting, everything. Pa said no. He doesn't like to let go of what's his.

Anyways, we were riding over to West Virginia to fetch Ro home. Pa sent Tolbert because he's so level in the head, and Tolbert took me because I was close to Roseanna. In this family, being so many of us, the young 'uns sort of attach themselves to an older one. Trinvilla and Adelaide belong to Alifair. Bill follows Bud around like a coon pup.

"Why do our sheep just lie down and get ready to die when they're attacked?" I asked Tolbert. "Why don't they fight?"

"It's not fair that God didn't give them anything to fight with," I said. "Most other creatures can defend themselves."

"Maybe God was tryin' to show us that there's two kinds of creatures in this world. Those that fight and those that don't," he said.

"You mean the sheep are like Mama? They'd rather pray?"

One thing Tolbert wouldn't hold with was my sassing Ma or Pa. Even though he knew they were both wrong about things sometimes. So I said no. Because I didn't ever want to earn myself the rough side of Tolbert's tongue.

"The sheep aren't stupid," he said. "Look how they know to come home after bein' out in the mountains for weeks."

Our sheep come home at least once a month. You open your eyes one morning and there they all just are, come for salt. Pa or one of the boys would give them some, and then they'd be gone again. All on their own.

I was kind of hoping that's the way it would be with Roseanna, that I'd just open my eyes one morning and she'd be there in the bed next to me. I missed her something powerful. "Do they come home only for the salt?"

He looked at me. Tolbert was the tallest and he was fair of hair and eyes, but it was what was in those eyes that held you. He didn't say much. But when he did, you listened. "What's goin' on in that head of yours, Fanny?"

"Well, I just thought maybe they come home because they know they belong here," I said. "And they want to make sure it'll all still be here for them. The house and us, I mean."

"They come home for the salt," he said. "But I like to think that all creatures want to come home sooner or later."

"Do you think Ro will come home, then?" I asked.

He didn't say anything for a minute. Just kept his eyes on the trail ahead, like he does sometimes. "Hope she's got the sense of our sheep," he said.

"Tolbert, why does Alifair hate me so?"

"She doesn't hate you, Fanny. She hates herself. Hates that she's lived twenty-two years and don't know what she's about. Hates that you're just a young 'un and still have the chance to find out. My guess is once she forgets about this healing business and pays mind to that young Will Bectal who wants to court her, she'll be a happier woman."

"Does she have the light of holiness? When she comes at me I want to kick her or bite her. But how can I if she's got it?"

"She's got the light of too much Ma. She should have got out from under Ma's shadow and been married years ago. Ma's a good woman, but she's trying to make Alifair into herself all over. She's got no light and no holiness, and the sooner she finds it out, the better we'll all be. So you kick and bite her all you want to defend yourself. Onliest reason I tell you this is because Alifair's been so hard on you. Not so you don't reverence Ma. You understand?"

I said yes. And since he was explaining things so good I thought I'd push further. "Why do Hatfields and McCoys hate each other?"

He grunted. "I hold it goes back to when Pa lost his sow and his pigs, two years ago. Ma says no, before that even. During The War Amongst Us, Pa's younger brother Harmon was murdered by bushwhackers. Everybody says it was old Devil Anse Hatfield and his Wildcats. You see, in 1863, Virginia's western counties broke away and became West Virginia. When men from that area got to come home on leave, they just didn't go back. They'd been fighting for their own ground, and now it was Union blue ground. So they formed their own Home Guard in West Virginia and stayed Confederate. Called themselves the Wildcats.

"And those were the people, headed up by Devil Anse, who shot and killed Pa's brother Harmon when he came home for a Christmas furlough. Shot him for coming out for the Union."

"So it started with the war?"

"Let's say the war just continued, only in a different way," Tolbert said.

"Ma always said it was the fortunes of war that made the men hereabouts so lawless and disorderly."

"Lawless and disorderly be danged. There's nothing lawless about wanting your own sow and pigs back," Tolbert muttered. Only he didn't say danged. "It's just in the McCoy blood to make right a wrong done to you or yourn. And to uphold the family honor while you're doing it. People around here, for the most part, are very serious about honor, though nobody more than the

McCoys. It goes back to our ancestors in Scotland, who were Highland Celts. That Celtic strain runs right through our blood."

I looked down at my hands holding the reins, at the tiny blue veins I could trace on their backs. I wondered what Celtic blood looked like and how it was different from other people's blood. I liked Tolbert's explanations. They made sense. Especially about Alifair. It was good to know she didn't have the light of holiness. Next time she started on me I'd kick and bite her good. Then let her heal herself and see how good she'd do. 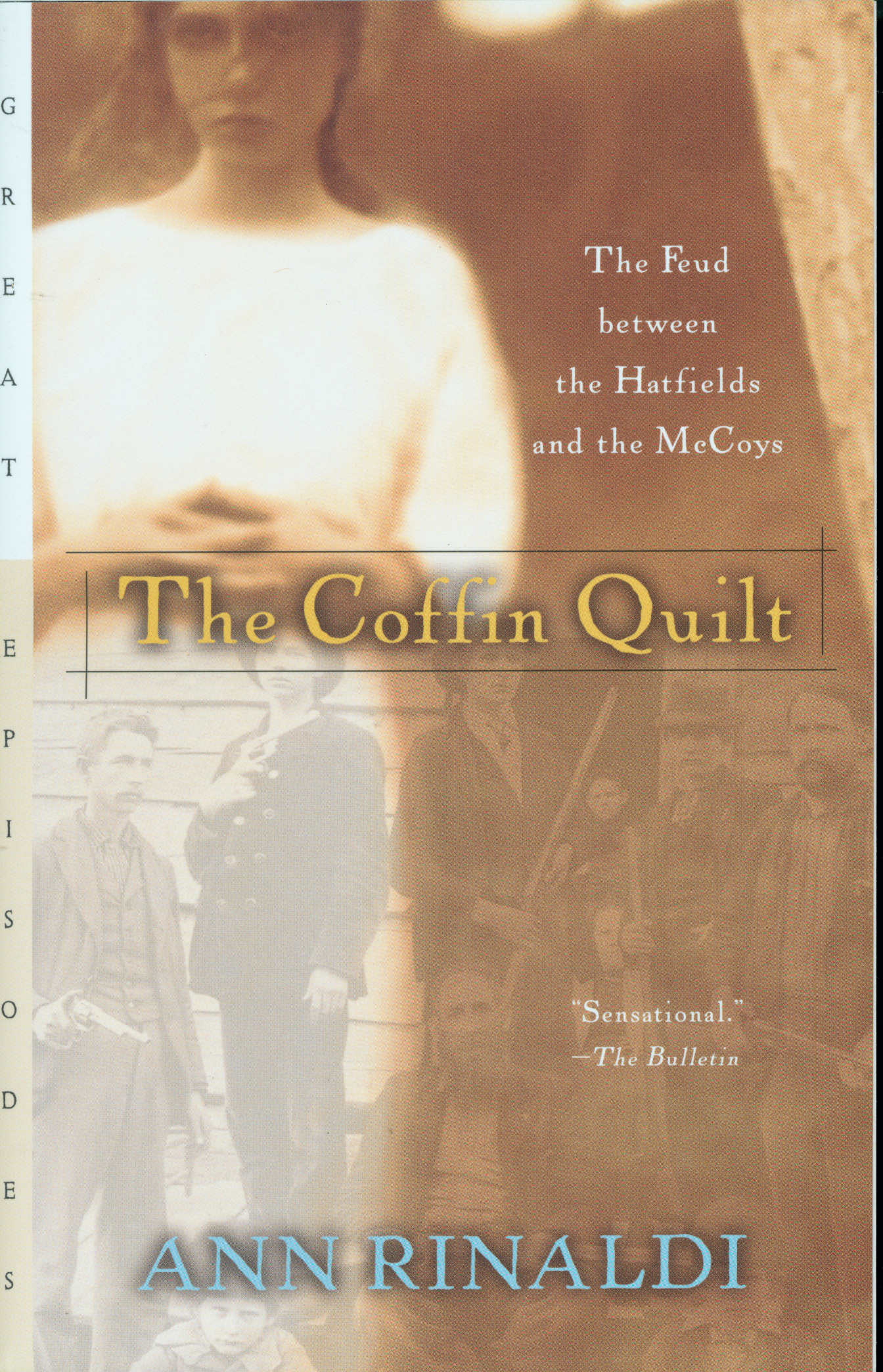