The Circus in Winter

From 1884 to 1939, the Great Porter Circus makes the unlikely choice to winter in an Indiana town called Lima, a place that feels as classic as Sherwood Anderson's Winesburg, Ohio, and as wondrous as a first trip to the Big Top. In Lima an elephant can change the course of a man's life-or the manner of his death. Jennie Dixianna entices men with her dazzling Spin of Death and keeps them in line with secrets locked in a cedar box. The lonely wife of the show's manager has each room of her house painted like a sideshow banner, indulging her desperate passion for a young painter. And a former clown seeks consolation from his loveless marriage in his post-circus job at Clown Alley Cleaners.

In her astonishing debut, Cathy Day follows the circus people into their everyday lives, bringing the greatest show on earth to the page.

About the author
Cathy Day

CATHY DAY grew up in Peru, Indiana, once the winter homem of several circuses. One of her great-uncles was the world’s fastest ticket taker, another was an elephant trainer. She lives in Ewing, New Jersey, and teaches at The College of New Jersey.

CIRCUS PROPRIETORS are not born to sawdust and spangles. Consider this: P. T. Barnum was nothing more than a dry-goods peddler-that is until he bought a black woman for $1,000, a sum he quickly recouped by displaying her as George Washington's 161-year-old mammy. Barnum's business partner, James Bailey, was born little Jimmy McGinnis-an orphaned bellboy transformed into circus mastermind, a man who taught army quartermasters the science of transporting masses of men and equipment by rail. Before trains, circuses traveled by horse-drawn wagons (and were called "mud shows" for obvious reasons) and by riverboat. If it hadn't been for paddle wheels and tall stacks, brothers Al, Alf, Charles, John, and Otto Rungeling might have become Iowa harness makers, like their father. But one morning along the Mississippi in 1870, the brothers were smitten with an elephant lumbering down a circus steamboat gangplank and became forever after the Ringling Brothers, owners (along with Barnum and Bailey) of the Greatest Show on Earth.

For many years, their greatest rival was the Great Porter Circus, owned by one Wallace Porter, a former Union cavalry officer. After Appomattox, Porter took his hard-won equine knowledge, applied it to the family's business, and became, at the age of thirty-eight, the owner of the largest livery stable in northern Indiana. How he became a circus man is another story altogether.

EACH SUMMER, Wallace Porter boarded a train in Lima, Indiana, and headed due east through Ohio, Pennsylvania, and New Jersey to the strange land of a million people, New York City. He employed a number of lawyers and bankers to oversee the profits from his stables and dutifully met with them once a year to discuss markets and dividends. These obligations dispensed with, he hailed a carriage and disappeared into the swarm of the city, following the true impetus of his trip. Wallace Porter went to New York to indulge in extravagance.

During his weeklong stay, he hardly slept, so intent was he to glut himself on the city. In the mornings, he had a shave and walked along the avenues down the length of Manhattan, which, in the late 1800s, was not an arduous undertaking. He handled his business over lunch, and afterward, he visited the finest men's tailors in the city and bought new shirts, Chesterfield coats, leather boots, and bowler hats-all of which were shipped back to Lima in enormous Saratoga trunks. At night, he dined out in the best restaurants, gorging himself on pheasant and artichokes. He drowned in vintage French wines. After dinner, he took in a play or the symphony, and then, until the small hours of the night, he roamed the parks alone. In Lima, such lavishness was a mark of poor character, a flaw almost impossible to hide, which was why Porter enjoyed the brief anonymity of the city. On the train ride back home, Porter tallied his expenses and hid that figure in his breast pocket like a guilty boy. He felt his thrifty father's eyes upon him, heard his voice saying, So what you can afford this? The money would buy more horses, carriages, a month's worth of hay. To punish himself, Porter lived a spartan existence the rest of the year, but come summer, he had to board the train, like a fish that must spawn. Always, he returned to Indiana feeling both completely hollow and fully sated.

The trip he took to New York in 1883 was different than the others, because that was the year he met Irene, who would become his wife. His banker, Irene's father, invited him to a Fourth of July party and introduced Porter to his guests as "my new friend, the pioneer from Indiana." Porter looked nothing like a settler, but something about the name itself, Lima, invoked the exotic and the adventurous.

The party was given on a warm summer evening. Irene's father decked the house in red, white, and blue, and instructed the small band he'd hired to play Sousa marches every so often to get folks in the patriotic mood. Irene descended the stairs to "Bonnie Annie Laurie" and caught Porter's eye as he stood near the punch bowl smoking a cigar. He was handsome in a smallish way that with his clothes and carriage passed for a kind of elegance. When he saw Irene, he dashed his cigar out in a cup of punch and met her at the bottom of the stairs. He took her hand, she smiled, and he realized then that since the war, he'd felt little within his heart except ambition, hardly an emotion at all.

Together, they watched the fireworks display as they ambled in the garden. "Tell me about this town of yours. Lima." Lee-ma, she said.

With a smile, Porter said, "Actually, it's like the bean."

"Are they grown there?"

"It's supposed to be Lee-ma, but I don't think the town fathers knew that." Porter recited a list of mispronounced Midwestern towns named for faraway places: Ver-sails, Brazz-ill, Kay-roh, New Praygue.

Irene laughed. "Tell me about Lie-ma."

So he described the countryside: He lived outside town along the Winnesaw, the river that separated the northern and southern halves of Lima. He described his monthly travel circuit to check on his stables, and again, gave her a litany of town names: Kokomo, Lafayette, Monticello, Rensselaer, Valparaiso, Nappanee, Warsaw, Alexandria. Irene repeated them, like someone trying to learn a foreign language. Bursts of fireworks lit Irene's face, and Porter said, "You should travel west sometime and see a bit of the world."

It was just something to say, but Irene sparked. "What's the farthest west you've ever been, Mr. Porter?"

"Wallace, please," he said. "Leavenworth, Kansas." That was where his cavalry regiment, the Eleventh Indiana, mustered out. Almost twenty years had gone by, but he could still see the land rolling like an ocean into the blue sky. He tried not to remember other images: a barn in Alabama full of stinking, rotting, wailing men. His regiment lost 13 in battle, 161 to disease.

"I've never been farther west than Buffalo, to visit my aunt," Irene said. She motioned with a sweep of her hand. "All these people do nothing but visit one another and marry one another. They just go round and round." Irene sighed. "You're a lucky man, Wallace." He looked at his feet, then up at the colorful sky, trying to gather his courage to ask to see her again the next day. But Irene said it first. "You'll have to come back tomorrow and tell me more." She put her hand in the crook of his arm.

Already, Irene loved Wallace Porter, or knew she would love him. But she also knew this: When men steer women through crowds, they need to believe they are at the helm. Women must apply subtle, imperceptible pressure with their fingertips. In this way women lead while appearing to be led. This is the way of the world.

NEW YORK courtships were customarily long affairs, drawn out over years at times, but Irene would have none of it. When her father protested about how the hasty marriage would look, she laughed and said, "What do I care? I'm going to Indiana." They married two weeks after the party and boarded the train for Lima. The return trip became a makeshift wedding tour with extended stays in the finest hotels in Philadelphia, Cleveland, Louisville, and Cincinnati. They went sightseeing, played faro in riverboat saloons, dined out until they ran out of restaurants, then moved on to the next city. In the Pullman, Irene held Porter's hand but rarely took her eyes from the landscape unfurling beyond the window. To her, the Blue Ridge were the Alps, and the Ohio River might well have been the Nile.

As they neared Lima, Porter saw the flattening land full of corn with new eyes. He thought for sure that upon arrival, Irene would find the town and his house (and by extension, himself) too simple, too crass. How could he tell her the truth? He was a longtime bachelor who, after late nights spent poring over figures...

PRAISE FOR THE CIRCUS IN WINTER

"This is one circus act that doesn't rely on dependable gimmicks to keep the audience amused." 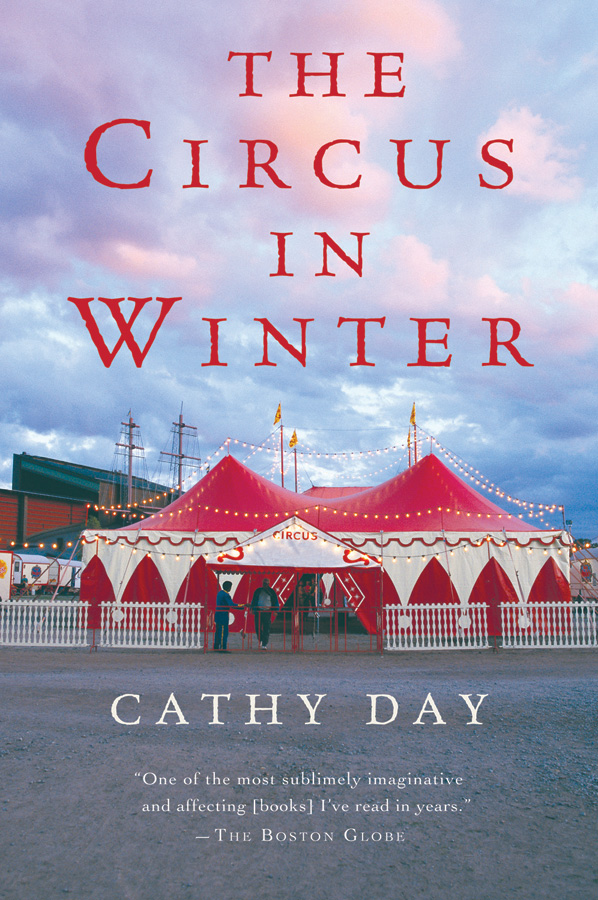