For readers of the best-selling novels Sleeping Giants and Dark Matter, an intense, high-stakes thriller with a science-fiction twist that asks: If technology enabled you to save the life of someone you love, would you do so even if it might doom millions?

"This crackling road trip through the apocalypse offers thrills all the way to its explosive, satisfying finale.” —Publishers Weekly

“Relentless, terrifying, and affecting, this book left me feeling like I’d been strapped to the front of the car like Mad Max in Fury Road—not realizing that it was taking me to an emotional ending that would leave me gutted. I’ve been a huge fan of Skillingstead’s work for years, but in The Chaos Function he’s outdone himself!”

For readers of the best-selling novels Sleeping Giants and Dark Matter, an intense, high-stakes thriller with a science-fiction twist that asks: If technology enabled you to save the life of someone you love, would you do so even if it might doom millions?

Olivia Nikitas, a hardened journalist whose specialty is war zones, has been reporting from the front lines of the civil war in Aleppo, Syria. When Brian, an aid worker she reluctantly fell in love with, dies while following her into danger, she’ll do anything to bring him back. In a makeshift death chamber beneath an ancient, sacred site, a strange technology is revealed to Olivia: the power to remake the future by changing the past.

Following her heart and not her head, Olivia brings Brian back, accidentally shifting the world to the brink of nuclear and biological disaster. Now she must stay steps ahead of the guardians of this technology, who will kill her to reclaim it, in order to save not just herself and her love, but the whole world.

About the author
Jack Skillingstead

JACK SKILLINGSTEAD's Harbinger was nominated for a Locus Award for best first novel. His second novel, Life on the Preservation, was a finalist for the Philip K. Dick Award. He has published more than forty short stories to critical acclaim and was short-listed for the Theodore Sturgeon Memorial Award and his work has been translated internationally.

Olivia Nikitas sat in the shade of an improvised awning, a canvas tarp that smelled like a dead goat. She checked her watch again, drummed her fingers nervously on the table. The hand-lettered habib café sign hung crookedly by a couple of wire twists. Most of the buildings on both sides of the street lay in ruins, either bombed-out shells or pulverized beyond recognition. The proprietor, Habib, had dragged his coffee machine and generator into what was left of an antique shop. Olivia admired his entrepreneurial spirit. As a freelance journalist, she had been covering the carnage in Syria since 2023—?six years now. The spirit of Aleppo was pretty thoroughly annihilated, so the appearance of the Habib Café, barely ten weeks into a shaky postwar era, looked like a positive development.

Across the street a cat slipped through a mountain of wreckage, its movement so sinuous and fleeting that at first Olivia thought the cat was the shadow of something passing through the air, like a bad omen.

She picked up her coffee, a potent Arabic blend spiced with cardamom. Holding the cup in the fingertips of both hands, she brought it to her lips. The luxury of fresh coffee equaled a minor miracle after the deprivations of war. Even in the heat, with sweat trickling from her hairline and her shirt sticking to her body, Olivia savored the scalding jolt of caffeine.

A little girl, maybe seven years old, came running down the street, the ragged cuffs of her trousers whisking up dust. She called to the cat, grabbed a bent spine of iron rebar, and hauled herself after it, climbing a potential avalanche. Her arms and legs were bird-bone thin. Olivia winced, sitting there on her comparatively fat American ass. She put her cup down, feeling irrationally guilty for the indulgence.

The cat darted under a slab of broken concrete. The little girl peered after it, calling, “Qetta, qetta.” The gap was just big enough that she might be tempted to crawl after the damn thing. Olivia lifted her sweat-damp hair away from the back of her neck and looked around, hoping for some adult supervision. Good luck with that. The city was overrun with orphans. Olivia started to stand.

In the distance, a gunshot popped.

Olivia went rigid. Technically, hostilities had officially ended. But that wouldn’t prevent a rogue sniper from taking up position. The shot had come from the direction of the Green Zone. By now, Brian and Jodee had left and would be out in the open. Jodee Abadi was her escort into the Old City, and Brian Anker was her would-be escort into a different kind of hazardous territory: a relationship impervious to her usual strategies of detachment. Brian wasn’t the first guy to take on that mission, but he had already gotten farther than most. If Olivia’s heart was a door, then Brian was the pushy salesman who had wedged his foot in the gap when she tried to slam it in his face. For that, she resented him a little. He was good about the resentment. He was good about everything. It really pissed her off.

Another gunshot popped. Where are you guys?

Suddenly she felt it, the brittle substratum of the enforced peace. It could give way at any time. Foreign military forces led by the Americans, barely held the city together. Soon something would break. A new insurgency, maybe. In the months since the end of the war, Olivia had gotten used to leaving her Kevlar vest in her room. She still brought her headscarf, though, even if at the moment she wore it loosely around her neck.

Two gunshots, and Brian (and Jodee) in the open.

By reflex, she reached for her phone, but there was no point. This district of Aleppo was a cellular dead zone.

The sound of something scraping and sliding pulled her attention back to the girl. A broken window frame surfed down the piled debris and cracked to pieces on the street. The little girl had her broomstick arm shoved all the way to the shoulder under the concrete slab. If the slab moved, it would crush her. Olivia quickly crossed the street. “Hey, kid! Be careful.”

From the top of the mountain of rubble, the girl looked at Olivia and pointed down. “Qetta, qetta.”

Olivia looked east, willing Brian and Jodee to be there. Instead, a couple of old men crossed the street, their summer white dishdashas seeming to float them above a haze of dust. Olivia hated that she worried about Brian. That’s what you got when you let the salesman stick his foot in the door. She should have known better.

“Olivia is a compelling, flawed character [and] the multiple apocalypses she creates feel all too plausible, as does the pain of her dilemma . . . Highly recommended for readers of dystopian stories, time-travel scenarios, and endings that cause them to rethink the entire book.” —Library Journal, starred review

“The horrifying but mundane end(s) of the world are rendered with powerful bleakness—making moments of human tenderness and kindness shine all the brighter.” —Kirkus Reviews

“[A] realistic and terrifying portrait of society’s swift unraveling in the face of disaster . . . This crackling road trip through the apocalypse offers thrills all the way to its explosive, satisfying finale.” —Publishers Weekly

“Skillingstead (Harbinger, 2009) deftly balances frenetic pacing and characters’ philosophical debates on parallel futures, the butterfly effect, and probability choices in a dramatic and suspenseful story supported by an intelligent, witty, and reluctant hero. His exploration of themes related to the manipulation of time will attract fans of Philip K. Dick, and the novel will also appeal to readers who enjoyed Michael Crichton’s sf thrillers and viewers of Amazon’s The Man in theHigh Castle.” —Booklist

“The Chaos Function just flat-out knocked me back in my chair. The very best kind of action-thriller meets hard sci-fi. A mind-bending jolt of high concept ideas injected straight to your frontal cortex. One of the best books I’ve ever read.” —Ted Kosmatka, author of The Flicker Men

“Relentless, terrifying, and affecting, this book left me feeling like I’d been strapped to the front of the car like Mad Max in Fury Road—not realizing that it was taking me to an emotional ending that would leave me gutted. I’ve been a huge fan of Skillingstead’s work for years, but in The Chaos Function he’s outdone himself!” —Daryl Gregory, award-winning author of Spoonbenders

“Deftly marrying genres, Jack Skillingstead has given us a science fiction thriller for the ages. Journalist Olivia Nikitas discovers an centuries-old conspiracy with the means to alter the very fabric of time. Dodging from war-ravaged Syria across a suddenly-apocalyptic United States, she must fight to survive in a changeable world where she alone knows what’s real. With a plot as mind-bending as pharmaceutical-quality Phillip K. Dick, The Chaos Function is an astonishment from page one to its explosive climax.” —James Patrick Kelly, winner of the Hugo, Nebula, and Locus awards

“A compelling near-future thriller of hard choices and unintended consequences. This is science fiction that feels all too real. Highly recommended.” —Ramez Naam, award-winning author of the Nexus trilogy 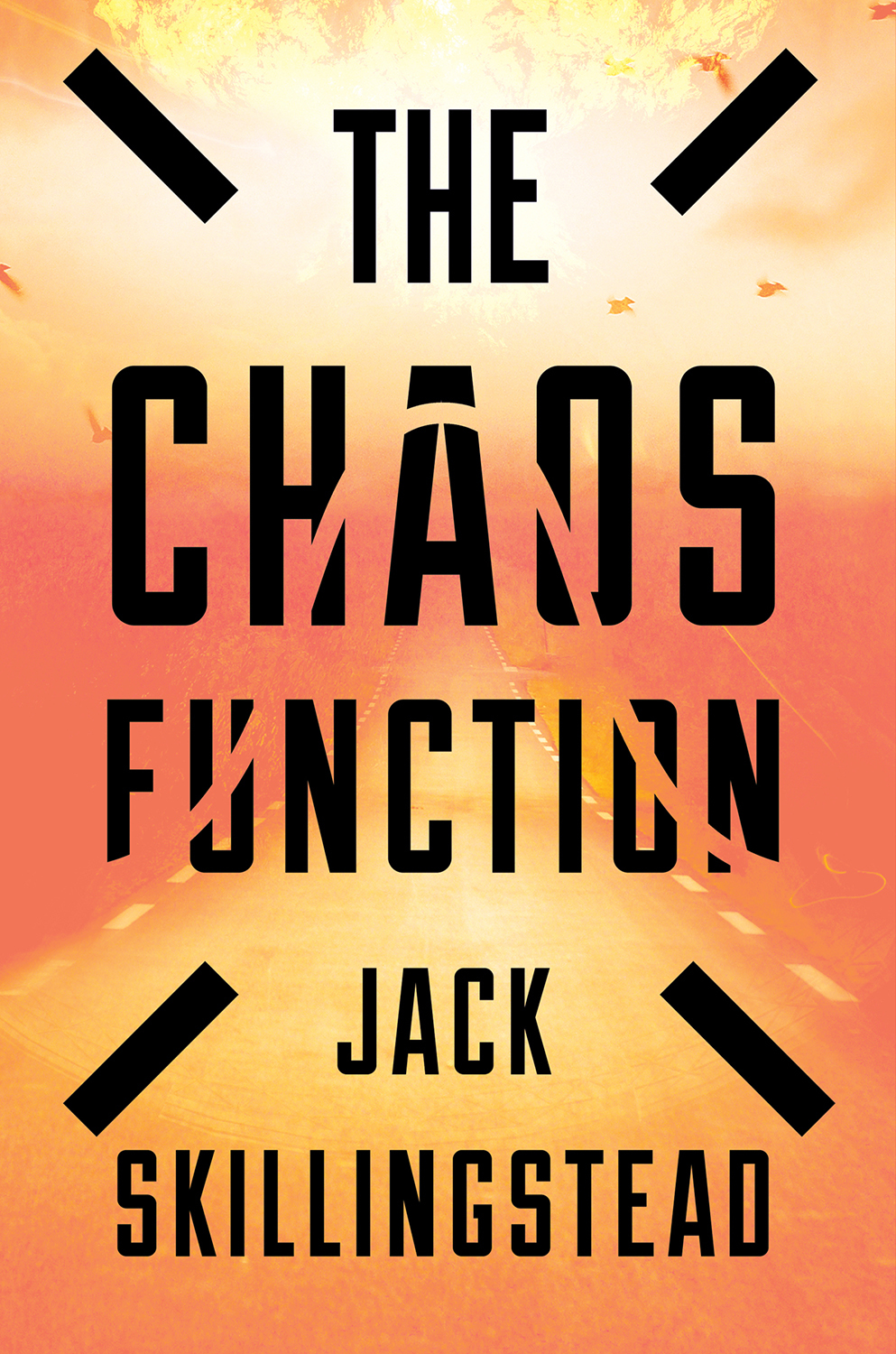