About the book
“[The Cave] is yet another triumph . . . for Portugal’s, or even the world’s, greatest novelist. Read it.” — Washington Post

Cipriano Algor, an elderly potter, lives with his daughter Marta and her husband Marçal in a small village on the outskirts of The Center, an imposing complex of shops and apartments to which Cipriano delivers his wares. One day, he is told not to make any more deliveries. Unwilling to give up his craft, Cipriano tries his hand at making ceramic dolls. Astonishingly, The Center places an order for hundreds. But just as suddenly, the order is canceled and the penniless three have to move from the village into The Center. When mysterious sounds of digging emerge from beneath their new apartment, Cipriano and Marçal investigate; what they find transforms the family’s life. Filled with the depth, humor, and extraordinary philosophical richness that marks all of Saramago’s novels, The Cave is one of the essential books of our time.

The man driving the truck is called Cipriano Algor, he is a potter by profession and is sixty-four years old, although he certainly does not look his age. The man sitting beside him is his son-in-law, Marçal Gacho, and he is not yet thirty. Nevertheless, from his face too, you would think him much younger. As you will have noticed, attached to their first names both these men have unusual family names, whose origin, meaning, and reason they do not know. They would probably be most put out to learn that "algor" means the intense cold one feels in one's body before a fever sets in, and that "gacho" is neither more nor less than the part of an ox's neck on which the yoke rests. The younger man is wearing a uniform, but is unarmed. The older man has on an ordinary jacket and a pair of more or less matching trousers, and his shirt is soberly buttoned up to the neck, with no tie. The hands grasping the wheel are large and strong, peasant's hands, and yet, perhaps because of the daily contact with soft clay inevitable in his profession, they also suggest sensitivity. There is nothing unusual about Marçal Gacho's right hand, but there is a scar on the back of his left hand that looks like the mark left by a burn, a diagonal line that goes from the base of his thumb to the base of his little finger. The truck does not really deserve the name of truck, since it is really only a medium-sized van, of a kind now out of date, and it is laden with crockery. When the two men left home, twenty kilometers back, the day had barely begun to dawn, but now the morning has filled the world with sufficient light for one to notice Marçal Gacho's scar and to speculate about the sensitivity of Cipriano Algor's hands. The two men are traveling slowly because of the fragile nature of the load and also because of the uneven road surface. The delivery of merchandise not considered to be of primary or even secondary importance, as is the case with plain ordinary crockery, is carried out, in accordance with the official timetables, at mid-morning, and the only reason these two men got up so early is that Marçal Gacho has to clock in at least half an hour before the doors of the Center open to the public. On the days when he does not have to give his son-in-law a lift but still has crockery to deliver, Cipriano Algor does not have to get up quite so early. However, every ten days, he is the one who goes to fetch Marçal Gacho from work so that the latter can spend the forty hours with his family to which he is entitled, and, afterward, Cipriano Algor is also the one who, with or without crockery in the back of the van, punctually returns him to his responsibilities and duties as a security guard. Cipriano Algor's daughter, who is called Marta and bears the family names of Isasca, from her late mother, and Algor, from her father, only enjoys the presence of her husband at home and in bed for six nights and three days every month. On the previous night, she became pregnant, although she does not know this yet.

The area they are driving through is dull and dirty, not worth a second glance. Someone gave these vast and decidedly unrural expanses the technical name of the Agricultural Belt and also, by poetic analogy, the Green Belt, but the only landscape the eyes can see on either side of the road, covering many thousands of apparently uninterrupted hectares, are vast, rectangular, flat-roofed structures, made of neutral-colored plastic which time and dust have gradually turned gray or brown. Beneath them, where the eyes of passersby cannot reach, plants are growing. Now and then, trucks and tractors with trailers laden with vegetables emerge from side roads onto the main road, but most of these deliveries are done at night, and those appearing now either have express and exceptional permission to deliver late or else they must have overslept. Marçal Gacho discreetly pushed back the left sleeve of his jacket to look at his watch, he is worried because the traffic is gradually becoming denser and because he knows that, from now on, once they enter the Industrial Belt, things will only get worse. His father-in-law saw the gesture, but said nothing, this son-in-law of his is a nice fellow, but very nervous, one of those people who was born anxious, always fretting about the passage of time, even if he has more than enough, in which case he never seems to know quite how to fill it, time, that is. What will he be like when he's my age, he thought. They left the Agricultural Belt behind them, and the road, which grows dirtier now, crosses the Industrial Belt, cutting a swath through not only factory buildings of every size, shape, and type, but also fuel tanks, both spherical and cylindrical, electricity substations, networks of pipes, air ducts, suspension bridges, tubes of every thickness, some red, some black, chimneys belching out pillars of toxic fumes into the atmosphere, long-armed cranes, chemical laboratories, oil refineries, fetid, bitter, sickly odors, the strident noise of drilling, the buzz of mechanical saws, the brutal thud of steam hammers and, very occasionally, a zone of silence, where no one knows exactly what is being produced. That was when Cipriano Algor said, Don't worry, we'll get there on time, I'm not worried, replied his son-in-law, only just managing to conceal his anxiety, Of course you're not, but you know what I mean, said Cipriano Algor. He turned the van into a side road reserved for local traffic, Let's take a shortcut down here, he said, if the police ask us why we're here, just remember what we agreed, we had some business to deal with at one of these factories before we went into town. Marçal Gacho took a deep breath, whenever the traffic on the main road got bad, his father-in-law would always, sooner or later, take a detour. What worried him was that he might get distracted and decide to make the turn too late. Fortunately, despite all his fears and his father-in-law's warnings, they had never yet been stopped by the police, One day, he'll realize that I'm not a little boy any more, thought Marçal, and that he doesn't have to remind me every time about how we have business to deal with at one of the factories. It did not occur to either of them that the real reason behind the continued tolerance or benevolent indifference of the traffic police was Marçal Gacho's uniform, that of a security guard working at the Center, rather than the result of multiple random lucky breaks or of stubborn fate, as they would doubtless have said if asked why they thought they had so far escaped being fined. Had Marçal Gacho known this, he might have made more of the weight of authority conferred on him by his uniform, and had Cipriano Algor known this, he might have spoken to his son-in-law with less ironic condescension. It is true what people say, the young have the ability, but lack the wisdom, and the old have the wisdom, but lack the ability.

Once past the Industrial Belt, the city finally begins, not the city proper, for that can be seen beyond, touched by the caress of the first, rosy light of the sun, and what greets one are chaotic conglomerations of shacks made by their ill-housed inhabitants out of whatever mostly flimsy materials might help to keep out the elements, especially the rain and the cold. It is, as the inhabitants of the city put it, a frightening place. Here, every now and then, and in the name of the classical axiom which says that necessity knows no law, a truck laden with food is held up and emptied of its contents before you can say knife. The modus operandi, which is extremely efficient, was devised and developed after a prolonged period of collective reflection on the results of earlier attempts whose failure, as immediately became apparent, was due to a total lack of strategy, to antiquated tactics, if one could glorify them with that name, and, lastly,

"[The Cave] is yet another triumph. . . Read it."—The Washington Post Book World

“Saramago is arguably the greatest writer of our time . . .A genuinely brilliant novel.”—Chicago Tribune

“One expects nothing less than another masterpiece from a remarkable writer.”—The Boston Globe

“This is both a meditation on the heartlessness with which modern society absorbs the individual, and a compassionate study of loyalty, love, and the ways in which people face the forces trying obliterate their spirit.”—Francine Prose, People 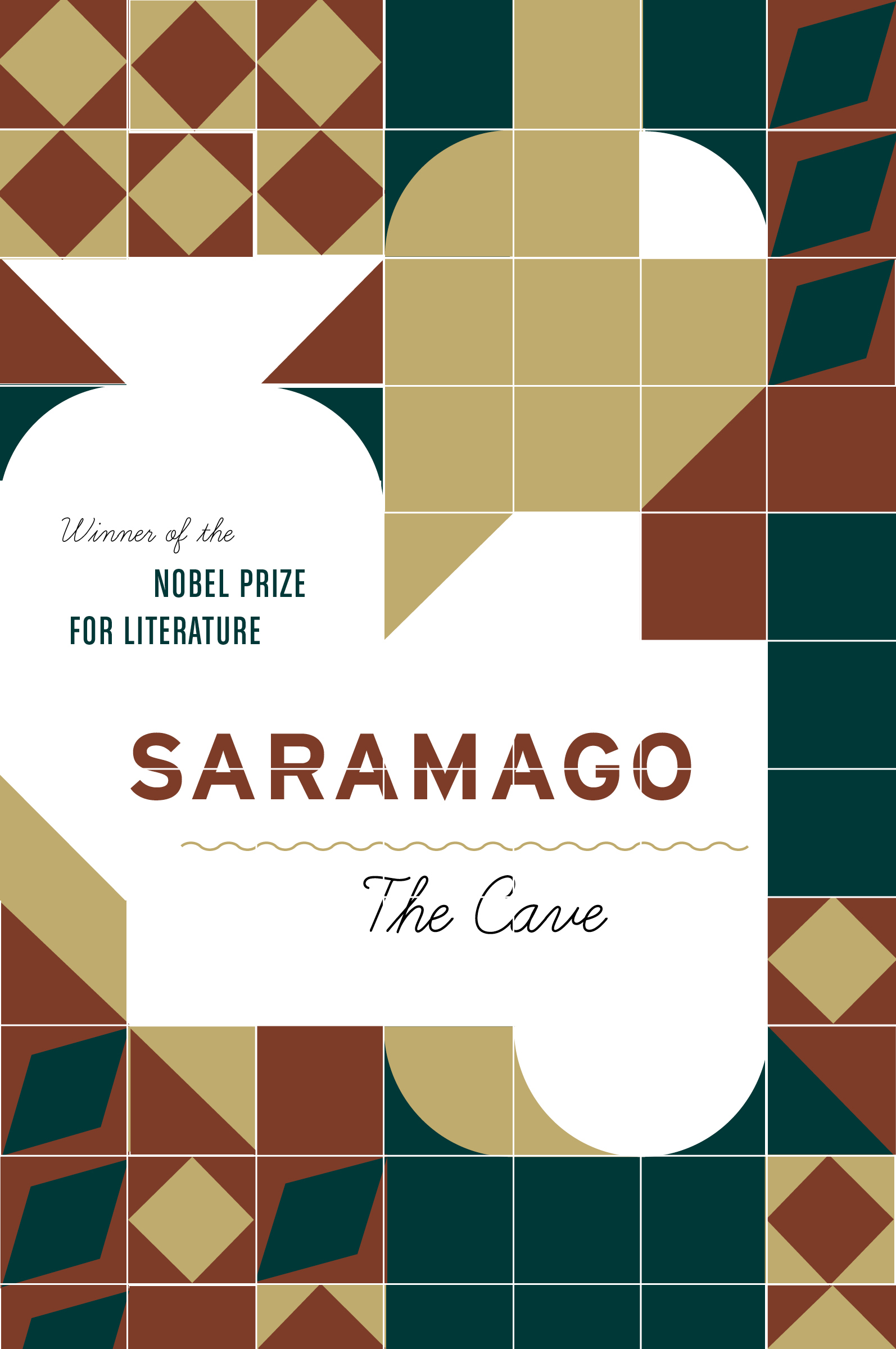