The Castle of Kings

An epic standalone novel of historical fiction tinged with mystery, set against the backdrop of medieval Germany's Peasant War. From the best-selling author of the Hangman’s Daughter series and The Ludwig Conspiracy.

“Pötzsch paints picturesque landscapes, whether it’s damp, dark castles, the stink of a medieval tannery, or whirlpool-plagued Rhine River rapids . . . Combine Princess Bride with Germanic history circa 1500, add a dash of Lord of the Rings, and there’s a week of good fun.” — Kirkus Reviews

In 1524, in what is now Germany, hundreds of thousands of peasants revolted against the harsh treatment of their aristocratic overlords. Agnes is the daughter of one of these overlords, but she is not a typical sixteenth-century girl, refusing to wear dresses and spending more time with her pet falcon than potential suitors. There is only one suitor she is interested in: Mathis, a childhood friend whom she can never marry due to his low birth status.

In the midst of war, Agnes’s falcon finds a mysterious ring, and Agnes begins having strange but seemingly meaningful dreams. Dreams that lead her and Mathis to run away from their home in Trifels Castle and into the midst of the tumultuous Peasants’ War, cast into an adventure that will lead them to shocking revelations about themselves and the future of the emerging German states.

“The war scenes are grimly realistic, and the narration gripping . . . The author makes the fantastical elements work by harnessing them to the grim reality of the Peasants’ War, setting his far-fetched romance in an utterly convincing world of economic hardship, social strife and religious and political uncertainty.” — Wall Street Journal

About the author
Oliver P&ouml;tzsch

OLIVER PÖTZSCH, born in 1970, has worked for years as a scriptwriter for Bavarian television. He is a descendant of one of Bavaria's leading dynasties of executioners. Pötzsch lives in Munich with his family.

Did the boy whose neck the hangman was fitting the noose around look any older than Mathis? Probably not. He was trembling all over, and fat tears ran down his cheeks, smeared already with snot and grime. From time to time the lad let out a sob; apart from that he seemed reconciled to his fate. Mathis guessed that he was about sixteen summers old, with the first downy hair growing above his lip. The boy had probably been proud of it, and had used it to impress the girls, but now he would never go chasing girls again. His short life was over before it had really begun.

The two men beside the boy were considerably older. Their shirts and hose were dirty and torn, their hair stood out untidily from their heads, and they were murmuring soundless prayers. All three stood on ladders propped against a wooden plank that had suffered from wind and weather. The Queichhambach gallows were massive and solidly built, and all local executions had taken place here for many decades, though recently there had been more and more of them. The last few years had brought winters that were too cold and summers that were too dry. Plague and other epidemics had afflicted the countryside. Hunger and oppressive feudal dues had driven many of the peasants of the Palatinate into the forests, where they joined bands of robbers and poachers. The three at the gallows had been caught red-handed poaching, and now they were about to pay the price.

Mathis stood a little way from the gaping crowd that had assembled to watch the execution this rainy morning. The hill where the gallows stood was a good quarter of a mile from the village, but close enough to the road leading to Annweiler for travelers to get a good view. Mathis had been delivering some horseshoes ordered by the village steward of Queichhambach from Mathis’s father, the castle blacksmith at Trifels, but he happened to pass the gallows hill on the way back. He had meant to go on along the road ?— ?after all, this was his day off work, and he had plans of his own ?— ?but when he saw all the people standing in the icy rain, their faces careworn and intent, waiting for the execution to take place, his curiosity won the day. So he stopped to watch the hangman’s cart taking the three prisoners to the place of execution.

By this time the hangman had put up the ladders beneath the gallows, dragged the three poor sinners over to the plank, and placed the nooses around their necks, one by one. A deep silence fell on the crowd, interrupted only by the boy’s sobs.

At the age of seventeen, Mathis had already seen several executions. Most of the victims had been robbers or thieves condemned to be hanged or broken on the wheel, and the spectators had applauded and thrown rotten fruit and vegetables at the terrified creatures on the scaffold. This time, however, it was different. There was an almost vibrant tension in the air.

Although it was already mid-March, many of the fields lying around the hill were still covered with snow. Shivering, Mathis watched the crowd reluctantly parting to make way for the mayor of Annweiler, Bernwart Gessler, as he climbed the rising ground along with the stout priest Father Johannes. It was obvious that the pair of them could think of better things to do on a cold, wet, rainy day than watch three gallows birds dangling from their ropes. Mathis suspected that they had been sitting over a few glasses of Palatinate wine in a warm tavern in Annweiler, but as the duke’s representative, the mayor was responsible for jurisdiction in the region, and now it was his task to pronounce sentence. Gessler braced himself against the rain blown into his face by gusts of wind, held his black velvet cap firmly on his head, and then climbed up onto the now empty hangman’s cart.

“Good people of Annweiler,” he said, turning to address the bystanders in a loud, arrogant voice. “These three fellows are guilty of poaching. They are nothing but robbers and vagabonds and have lost the right to life. Let their death be a warning to us all that the anger of God is terrible, but also righteous.”

“Robbers and vagabonds, are they?” growled a thin man standing near Mathis. “I know that poor devil on the right, it’s Josef Sammer from Gossersweiler. A decent hard-working laborer, he was, until his master couldn’t pay him no more, so he went off to the woods.” He spat on the ground. “What’s the likes of us supposed to eat, after two harvests wrecked by hail? There’s not even beechnuts left in the forest. It’s as empty as my wife’s dowry chest.”

“They’ve raised our rent again,” another peasant grumbled. “And the priests live high on the hog at our expense ?— ?come what may, they make sure to get their tithes. See how fat our priest is these days.”

Stout Father Johannes crossed to the ladders beneath the gallows, carrying a simple wooden cross. He stopped at the feet of each man and recited a short Latin prayer in a high, droning voice. But the condemned men above him might have been in another world already, and they simply stared into the void. Only the boy was still weeping pitifully. It sounded like he was calling for his mother, but no one in the crowd answered him.

“By virtue of the office conferred upon me by the duke of Zweibrücken, I command the executioner to inflict their rightful punishment on these three miscreants,” the mayor proclaimed. “Your lives are hereby forfeit.”

He broke a small wooden staff, and the Queichhambach executioner, a sturdy man in baggy breeches, a linen shirt, and a bandage over one eye, took the ladder away from under the feet of the first delinquent. The man struggled for a while, his whole body swinging back and forth like an out-of-control clock pendulum, and a wet patch spread over his lower body. As his movements became weaker, the hangman tugged at the second ladder. Another wild dance in the air began as the second man dangled from his rope. When the executioner finally turned to the boy, a murmur ran through the crowd. Mathis was not the only one to have noticed how young he was.

“Children! You’re hanging children!” someone cried. Turning, Mathis saw a careworn woman with two snotty-nosed little girls clinging to her apron strings. A tiny baby cried inside the rolled-up linen cloth that the woman had tied to her back. She did not seem to be the boy’s mother, but nonetheless her face was red with anger and indignation. “A thing like this can’t be God’s will,” she screamed, giving vent to her fury. “No just God would allow it.”

The hangman hesitated when he saw how restless the spectators were. The mayor turned to the crowd with his hands raised. “He’s no child now,” he rasped in a voice used to command. “He knew what he was doing. And now he will get his punishment. That’s only right and just. Does anyone here dispute it?&rdqu... 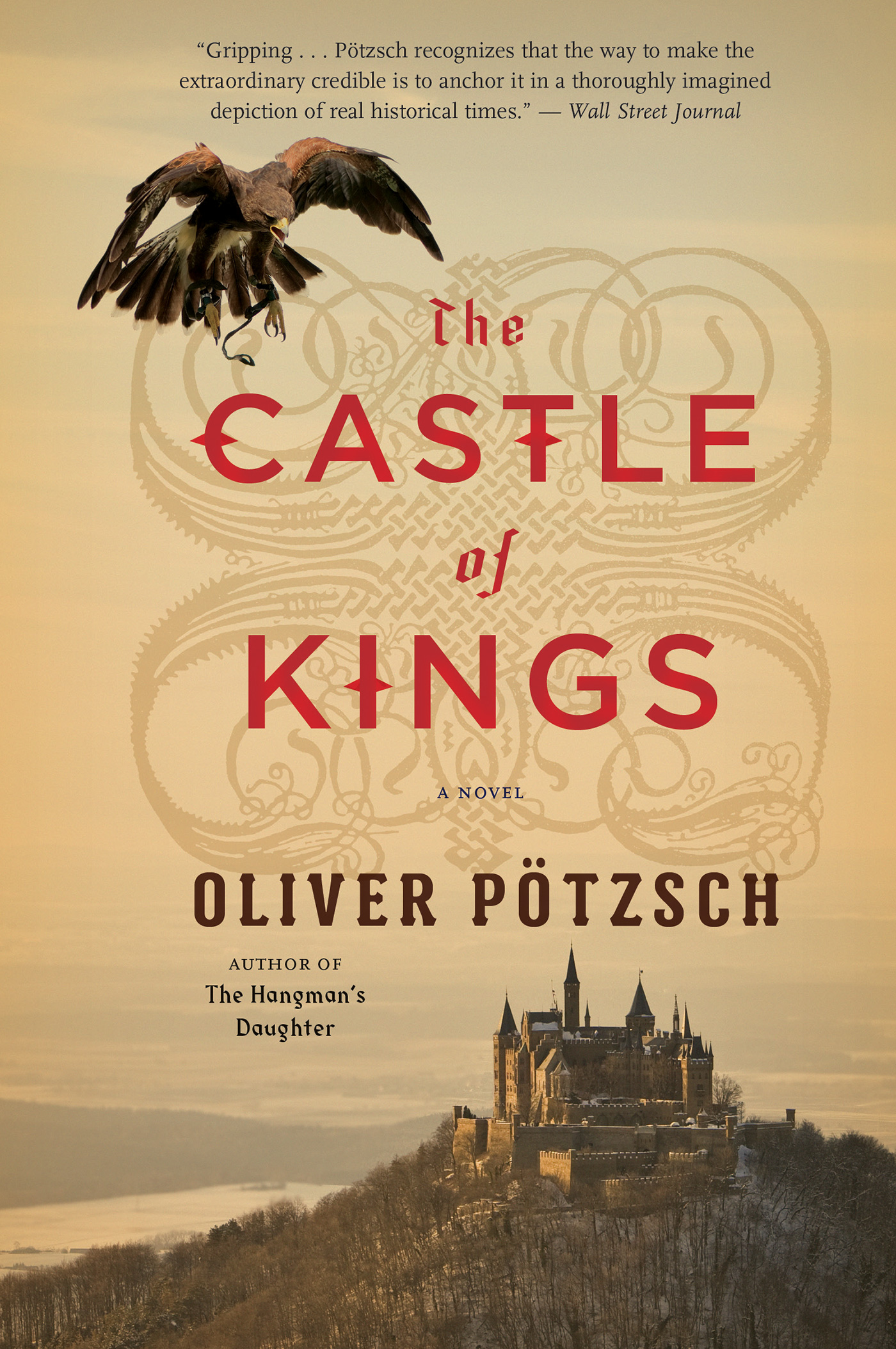