The Case of the Phantom Cat: The Mysteries of Maisie Hitchins Book 3

Maisie is excited to visit the the country for the first time as a companion to her best friend, Alice. But as soon as they arrive, the girls are warned that the manor house they're staying in is haunted. Strange sounds and sightings of a spectral cat terrify Alice, and it's up to Maisie to prove there's no such thing as ghosts. This third book in The Mysteries of Maisie Hitchins series is the spookiest one yet!

"[A] young Nancy Drew adventure by way of Downton Abbey." —Publishers Weekly review of The Case of the Stolen Sixpence

In book three of Holly Webb's The Mysteries of Maisie Hitchins, twelve-year-old Maisie and her dog Eddie are invited to join Maisie's friend Alice on a trip to the country. It's lovely to get away from the London smog, but there is something strange about the manor where the girls are staying. Odd noises, horrid smells, and sightings of a spectral cat keep them up at night. Has Alice's father rented a haunted house? There must be a logical explanation, and Maisie plans to use her detecting skills to find out what it is!

About the author
Holly Webb

HOLLY WEBB is a former children's book editor who has authored over ninety books for children published in the UK. Besides Maisie Hitchins, other series that have crossed the pond include My Naughty Little Puppy, the Rose books, the Lily books, and Animal Magic. Webb lives in Berkshire, England, with her husband, three boys, and Milly, her cat. Visit her website at www.holly-webb.com.

Marion Lindsay is an illustrator of picture books and novels for children whose work has been published in nine countries. She studied at Cambridge School of Art, graduating in 2010 with a masters degree in children's book illustration. She lives in the United Kingdom.

Maisie dusted the Chinese vase on the hall table again. It wasn’t in the slightest bit grubby anymore, but she wanted an excuse to hang around abovestairs and she’d polished everything else she could find. She was waiting for her friend Alice to come for her French conversation lesson with Madame Lorimer, who lodged on the second floor. The hall clock struck the quarter hour, and Maisie sighed. Alice clearly wasn’t coming. Again. She had missed her lesson for the third week in a row now.

Maisie picked up her dusters and the beeswax polish and walked slowly down the back stairs to the kitchen, where Sally, the maid, was peeling potatoes at the big table. Maisie’s grandmother was poking at a saucepan on the range, boiling a treacle sponge pudding for the lodgers’ dinner.

The house at 31 Albion Street was divided up into apartments on the different floors and rented out to lodgers. The best rooms on the first floor were rented to Professor Tobin, who had filled them with glass cases full of strange stuffed animals and other odd relics that he had collected on his travels. An actress, Miss Lottie Lane, lived on the third floor, and of course Madame Lorimer, the French teacher, was on the second.

“Goodness, have you only just finished?” Gran frowned at Maisie.

Maisie crouched down to fuss over Eddie, her dog. He had been asleep in his basket close to the stove, but now he was leaping up at her happily, his ears flapping. “Oh . . . Were you waiting for Miss Alice again?” Gran said.

“She must be very ill,” Maisie murmured worriedly as she stroked Eddie’s silky ears. “It’s more than a fortnight now since we’ve seen her.”

“They sent a message to Madame Lorimer, though, didn’t they?” Gran asked, putting the lid back on the pan and dabbing her steam-reddened face with her apron. “Did they not say what was wrong?”

“A putrid sore throat—that was all her governess said.” Maisie glanced anxiously at Gran. “But it might have got worse. What if Alice has scarlet fever? George told me that a little girl who lives on his street has it and she’s very bad. The fever’s spread all through the school.”

George, the butcher’s boy, had been gorily dramatic about the scarlet fever when he’d delivered the meat that morning. He’d told Maisie that Elizabeth, the little girl who lived a few houses down from his family, was bright red and bumpy all over. He said she looked like a strawberry. Although, come to think of it, how did George know? He’d hardly have gone visiting. But at the time she’d been so fascinated by his description of Elizabeth the strawberry that she hadn’t thought to ask.

“And then her skin all started peeling off!” George had hissed.

It was like some dreadful ghost story, Maisie thought. “Is it catching?” she’d asked him.

“Catching! Of course it’s catching!” George rolled his eyes at her. “Half the school’s got it. And there’s nothing you can do, you know.” He shrugged. “Some people get better. But most don’t,” he added, biting his lip. “I just hope my little sister’s going to be all right. She was playing hopscotch in the street with Elizabeth just a few days ago. I don’t want her going down with the scarlatina.”

Maisie frowned. “Scarlatina?” It sounded like some particularly nasty sort of fairy. Perhaps one that went around making people ill. Turning them into strawberries with one flick of her wand.

“Same thing,” George explained gloomily. “Just another name for it. Oh, well. Better get on.”

Gran sniffed. “But Miss Alice doesn’t go to school, does she? She has her own governess. So she would hardly have been mixing with those sorts of children. And she’s too old for scarlet fever, surely. Don’t fuss, Maisie. The poor child probably just has a sore throat, like that governess of hers said.”

Maisie smiled. “If Alice has any sense, she’ll stay ill for as long as she can. I’d be ill if I had to have lessons from a governess as horrible as Miss Sidebotham every day.” But she was still playing with Eddie’s ears, running them through her fingers and furrowing her brow. “Do you think I could go and visit her?”

“Yes,” Maisie sighed. She didn’t enjoy housework, but she was good at it because she’d had a great deal of practice. Even though they owned their house and it was a tall one on a smart-ish London street, they certainly weren’t rich, and Gran needed Maisie’s help.

Thirty-one Albion Street had a great many stairs, and there was a lot of it to keep clean. Between Maisie and Gran and Sally, they managed it all and made a respectable living from the lodgers. But it had meant that Maisie had had to leave school well before she was twelve to help. Gran had told her that if anyone asked, she was to say that she had lessons from Madame Lorimer. There had been seventy children in Maisie’s class at school, though, and Maisie reckoned her teacher had hardly noticed she was gone.

“Oh, go on then, Maisie. Go and see Miss Alice and find out how she is!”

“Can I really?” Maisie hugged her. “Oh, but, Gran, they won’t let me in to visit her looking like this, will they?” Maisie looked down at her faded wool dress and her apron. She was clean and neat, but certainly not smart. The servants at Alice’s lovely house would know at once that she wasn’t a suitable friend for a young lady.

“Go to the kitchen door, Maisie, for goodness’ sake. All this detecting and you still haven’t an ounce of common sense. Ask after Miss Alice and say Madame Lorimer sent you. Tell them you’ve a message for her, sending her good wishes, or something like that. And put your hat on!” Gran called as Maisie dashed out of the kitchen. “Oh, and don’t forget the dog! He’s getting under my feet!”

Maisie tiptoed down the steps into the basement and knocked quietly at the kitchen door of Alice’s house. She had never been inside before—they usually met at Maisie’s or occasionally in the street when Alice was out walking. But she was almost always with a maid or her governess, which meant they couldn’t do much more than smile and wave. Maisie had seen Miss Sidebotham tell Alice off for even that.

“Now be good,” she whispered to Eddie sternly. He had seen a cat on their way over and Maisie hadn’t managed to grab his collar in time. He had barked madly and chased it halfway down the street, nearly tripping up several ladies out shopping. It had taken her ages to catch him, and it was very embarrassing.

Eddie looked up at her innocently and wagged his tail. Maisie sig...

"Maisie's determination and systematic methods help her to uncover realistic explanations for each of the spectral phenomena, and readers will enjoy sorting through the legitimate clues and red herrings." 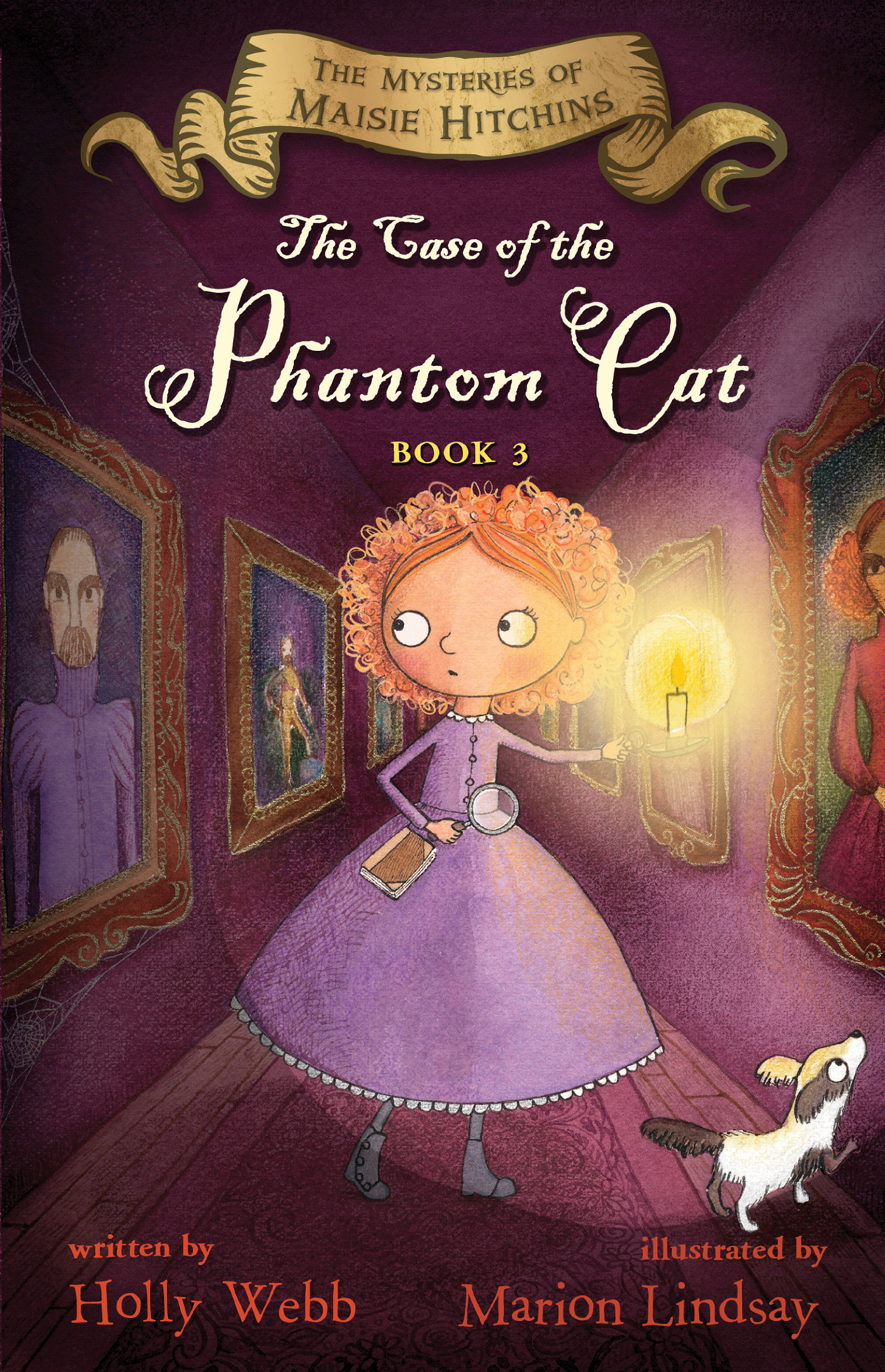