by Terry Pratchett
$17.99
An epic tale—set in a minuscule world—written and illustrated by the incomparable award-winning, best-selling author Terry Pratchett.

About the book
In the beginning, there was nothing but endless flatness. Then came the Carpet . . .

That’s the old story everyone knows and loves. But now the Carpet is home to many different tribes and peoples, and there’s a new story in the making. The story of Fray, sweeping a trail of destruction across the Carpet. The story of power-hungry mouls—and of two brothers who set out on an adventure to end all adventures when their village is flattened.

First published in 1971, this hilarious and wise novel marked the debut of the phenomenal Sir Terry Pratchett. Years later, Sir Terry revised the work, and this special collectable edition includes the updated text, his original color and black-and-white illustrations, and an exclusive story—a forerunner to The Carpet People created by the seventeen-year-old nascent writer who would become one of the world's most beloved storytellers.

They called themselves the Munrungs. It meant The People, or The True Human Beings.

It’s what most people call themselves, to begin with. And then one day the tribe meets some other people, and gives them a name like The Other People or, if it’s not been a good day, The Enemy. If only they’d think up a name like Some More True Human Beings, it’d save a lot of trouble later on.

Not that the Munrungs were in any way primitive. Pismire said they had a rich native cultural inheritance. He meant stories.

Pismire knew all the old stories and many new ones and used to tell them while the whole tribe listened, enthralled, and the nighttime fires crumbled to ashes.

Sometimes it seemed that even the mighty hairs that grew outside the village stockade listened, too. They seemed to crowd in closer.

The oldest story was the shortest. He did not tell it often, but the tribe knew it by heart. It was a story told in many languages, all over the Carpet.

“In the beginning,” said Pismire, “there was nothing but endless flatness. Then came the Carpet, which covered the flatness. It was young in those days. There was no dust among the hairs. They were slim and straight, not bent and crusty like they are today. And the Carpet was empty.

“Then came the dust, which fell upon the Carpet, drifting among the hairs, taking root in the deep shadows. More came, tumbling slowly and with silence among the waiting hairs, until the dust was thick in the Carpet.

“From the dust the Carpet wove us all. First came the little crawling creatures that make their dwellings in burrows and high in the hairs. Then came the soraths, and the weft borers, tromps, goats, and gromepipers, and the snargs.

“Now the Carpet had life and noise. Yes, and death and silence. But there was a thread missing from the weave on the loom of life.

“The Carpet was full of life, but it did not know it was alive. It could be, but it could not think. It did not even know what it was.

“And so from the dust came us, the Carpet People. We gave the Carpet its name, and named the creatures, and the weaving was complete. We were the first to give the Carpet a name. Now it knew about itself.

“Though Fray, who hates life in the Carpet, may tread upon us, though shadows grow over us, we are the soul of the Carpet, and that is a mighty thing. We are the fruit of the loom.

“Of course, this is all metaphorical, but I think it’s important, don’t you?”

It was the Law that every tenth year the people of all the tribes in the Dumii Empire should come and be Counted.

They did not go all the way to the great capital city of Ware, but went instead to the little walled town of Tregon Marus.

The Counting was always a great occasion. Tregon Marus would double in size and importance overnight as tribal tents were pitched outside its walls. There was a horse market and a five-day fair, old friends to be met, and a flood of news to be exchanged.

And there was the Counting itself. New names were added to the crackling scrolls, which, the people liked to believe, were taken to Ware, even to the Great Palace of the Emperor himself. The Dumii clerks laboriously wrote down how many pigs and goats and tromps everybody had, and one by one the people shuffled on to the next table and paid their taxes in furs and skins. That was the unpopular part. So the queue wound round Tregon Marus, in at the East Gate, through the postern and stables, across the market square, and through the countinghouse. Even the youngest babies were carried past the clerks, for the quill pens to wobble and scratch their names on the parchment. Many a tribesman got a funny name because a clerk didn’t know how to spell, and there’s more of that sort of thing in History than you might expect.

On the fifth day the governor of the town called all the tribal chieftains to an audience in the market square, to hear their grievances. He didn’t always do anything about them, but at least they got heard, and he nodded a lot; and everyone felt better about it, at least until they got home. This is politics.

That was how it had always happened, time out of mind.

And on the sixth day the people went back to their homes, along the roads the Dumii had built. They went east. Behind them the road went west, until it came to the city of Ware. There it was just one of the many roads that entered the city. Beyond Ware it became the West Road, becoming narrower and more winding until it reached the farthermost western outpost of the Rug.

Such was the Dumii Empire. It covered almost all of the Carpet from the Woodwall to the wasteland near Varnisholme in the north.

In the west it bordered Wildland and the uttermost fringes of the Carpet, and southward the roads ran as far as the Hearthlands. The painted people of the Wainscot, the warlike Hibbolgs, even the fire-worshippers of the Rug, all paid their tribute to the Emperor.

Some of them didn’t like the Dumii much, usually because the Empire discouraged the small wars and cattle raids that, in the outlying regions, were by way of being a recreational activity. The Empire liked peace. It meant that people had enough time to earn money to pay their taxes. On the whole, peace seemed to work.

So the Munrung tribe went east, and passed out of the chronicles of the Empire for another ten years. Sometimes they quarreled among themselves, but on the whole they lived peacefully and avoided having much to do with history, which tends to get people killed.

Old Grimm Orkson, chieftain of the Munrungs, had two sons. The eldest, Glurk, succeeded his father as chieftain when old Orkson died.

To the Munrung way of thinking, which was a slow and deliberate way, there couldn’t have been a better choice. Glurk looked just like a second edition of his father, from his broad shoulders to his great, thick neck, the battering center of his strength. Glurk could throw a spear farther than anyone. He could wrestle with a snarg, and wore a necklace of their long yellow teeth to prove it. He could lift a horse with one hand, run all day without tiring, and creep up so close to a grazing animal that sometimes it would die of shock before he had time to raise his spear. Admittedly he moved his lips when he was thinking, and the thoughts could be seen bumping against one another like dumplings in a stew, but he was not stupid. Not what you’d call stupid. His brain got there in the end. It just went the long way round.

“He’s a man of few words, and he doesn’t know what either of them means,” people said, but not when he was within hearing.

One day, toward evening, he was tramping homeward through the dusty glades, carrying a bone-tipped hunting spear under one arm. The other arm steadied the long pole that rested on his shoulder.

In the middle of the pole, its legs tied together, dangled a snarg. At the other end of the pole was Snibril, Glurk’s younger brother.

Old Orkson had married early and lived long, so a wide gap filled by a string of daughters, who the chieftain had carefully marr...

"The perfect starting place for young readers; seasoned Pratchett fans will just revel in his wit, his subversion of tropes and his sense of humanity. . . . Small in scale but large in pleasure."

"This story is inventive in its carefully worked-out central conceit, often vey funny, and dotted with some genuinely scary bits, as well as Pratchett's wiry 1971 spot illustrations."

"All of the big political ideas of mid-century epic fantasy are here writ literally small and carried along by Pratchett's signature wit and flawless pacing."

"Sure to be sought after by Pratchett's fans, young and old, this adventure will also amuse children who have never heard his name."

"Fantasy with comedic flair is the Pratchett trademark . . . [This] book will entice young readers into a world with enough adventure, terror, and comic relief to keep them intrigued." 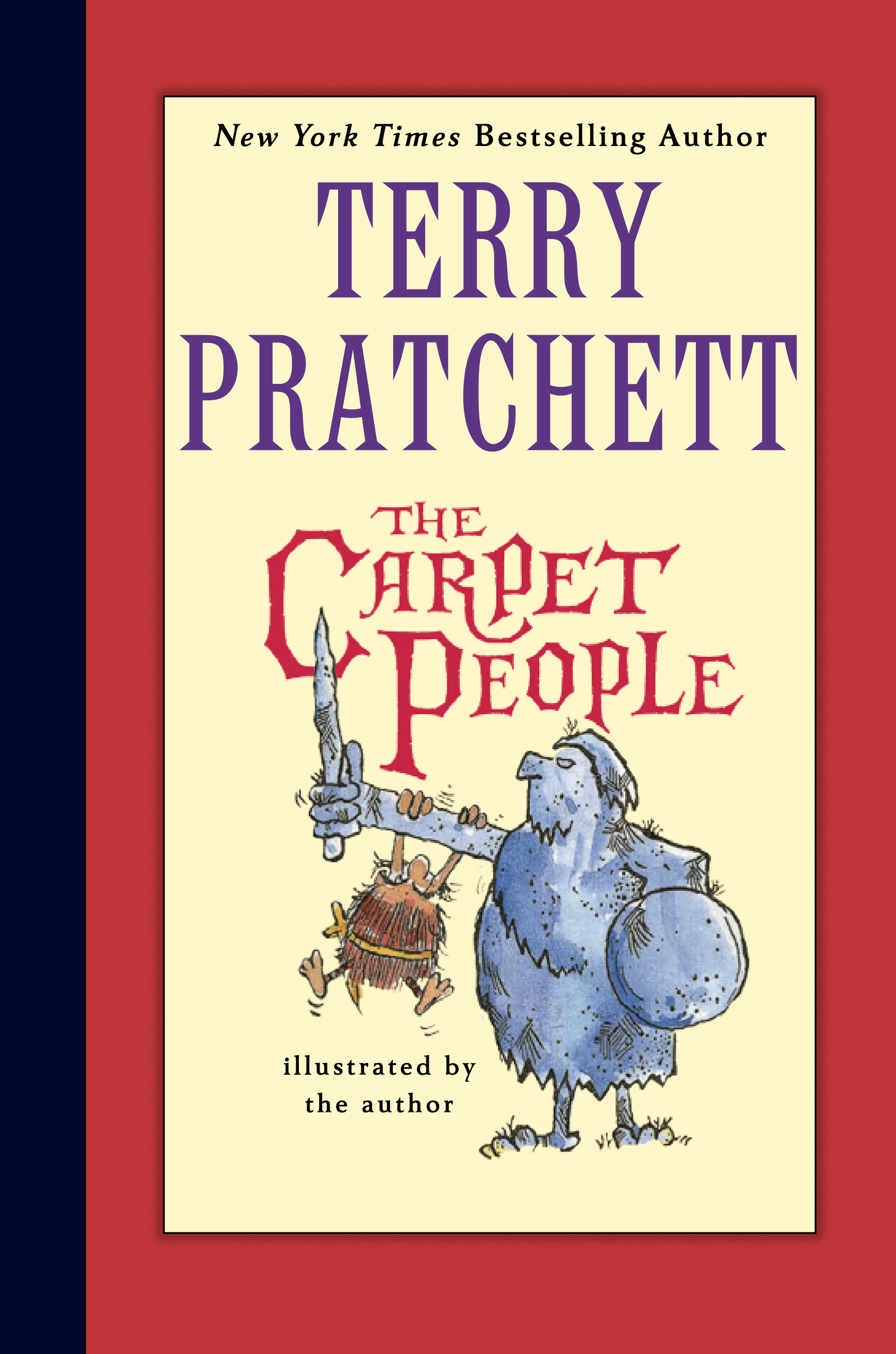