by Kieran Larwood and David Wyatt
$7.99

The young rabbit Podkin One-Ear and his allies battle to save their land from the evil Gorm tribe. The Longburrow series is Middle-earth for middle graders!

The young rabbit Podkin One-Ear and his allies battle to save their land from the evil Gorm tribe. The Longburrow series is Middle Earth for middle graders!

Podkin and his sister and baby brother, Paz and Pook, struggle to keep their ragtag clan of refugees safe from enemies who are destroying the forest in an effort to find them. When they are separated from their clan, the siblings encounter the mysterious and mystical creatures who are the heart of the forest itself. As the fate of all rabbitkind hangs in the balance, the youngsters must recruit these new allies and convince feuding clans to come together in a desperate final battle to defeat the diabolical Gorm.

Action and high stakes propel the climactic struggle in the series that shows anyone—even little rabbits—can do great things.

About the author
Kieran Larwood

Kieran Larwood has been passionate about stories and storytelling since reading The Hobbit at age six. He is a father, children's book author, and former teacher. He lives in England. Visit him online at kmlarwood.com and on Twitter @kmlarwood.

David Wyatt's art graces books by many of the world's preeminent fantasy authors, including Tolkein, Pratchett, Le Guin, and Pullman. He lives in England. Visit him online at davidwyattillustration.com.

“Why are you crying?”

The bard and his little apprentice, Rue, are standing next to the stones of Blackhenge, looking down into a valley filled with tents, stages, and flagpoles. The morning sun is glinting on the volcanic glass of the stones, the sky is pure forget-me-not blue, and tiny butterflies flit to and fro among the flowers. It seems like the perfect start to the perfect day.

And yet the bard is struggling to hold back giant, tearful sobs. His mouth is clenched, his fists bunched, his body literally shakes with the effort, but his eyes have betrayed him: tears have soaked his face; they roll down his nose and drip onto his cloak.

“What’s making you so sad?” Rue has never seen the old rabbit like this. He clutches at the bard’s breeches, feeling like crying himself. Unable to speak, the bard points down toward the festival below. It was supposed to be a celebration: the annual get-together of bards from all over the Five Realms to swap songs, stories, and sagas. Now it is a funeral instead.

The centerpiece of the gathering had been a large hexagonal stage. Just last night they had been sitting around it, watching performers weave their magic over the audience. The wooden boards have now been hacked to pieces to build a funeral pyre, upon which the body of the High Bard has been laid, draped in rainbow flags, bunting, and garlands of daffodils. From what Rue can gather, he died in the night, sending the whole festival into mourning.

All the bards have gathered around the pyre. They have dressed themselves in their brightest outfits, tied colored pennants to their staves, even dyed their fur in vibrant streaks of orange, violet, and spring green. From up on the hillside it looks like several rainbows have collided, shattering into a puddle of shards, to fill the valley below.

Rue stares at the sight, scratching his ear. “I thought people wear black when someone dies,” he says. “It looks like they’re having a party.”

“He . . . he always . . . hated black,” the bard manages to say before the sobs threaten to overtake him again. There is a flare as someone lights the pyre, and flames begin to lick over the piled wood. The rainbow flags start to blacken and shrivel.

“Did you know him, then?” Rue asks. He can’t understand why his master is so upset about someone they had only seen on the stage.

Smoke is drifting up from the pyre now. The stack of wood has been packed with incense and herbs. Even though they stand high above, Rue can catch a hint of the scent: patchouli and lavender. Sweet, white smoke rising up to drift away in the breeze.

“Then why aren’t we down there with everyone else?” The bard had dragged him out of bed at first light, and Rue had been looking forward to another day of exploring the festival. It seems unfair that they are missing out, even if it is a sad occasion.

“Because,” is all the bard says. He reaches out a paw, as if to touch the smoke that is lazily curling up out of the valley. Rue thinks he hears him whisper “Goodbye,” and then the bard turns to walk away, pulling Rue along beside him.

They march eastward for the rest of the morning, along the top of the downs, the bard keeping up a fast pace that has Rue panting for breath. The little rabbit has a ton of questions but no time to ask them (which he suspects is a cunning plan on the bard’s part). The questions bubble up inside him, making him hop and skip as he walks. When the rabbits finally stop for a rest, out the questions come, one after another like an overflowing teapot.

The bard sinks to the ground, stretches out his legs, groans, then lies back on the spongy heather, looking up at the pure blue, endless sky.

The bard stays silent but pats the spot of ground next to him. With a sigh, Rue drops his stick and pack and lies down next to his master.

“If I tell you why we had to leave, do you promise to stay quiet for five minutes?” the bard asks. Rue can’t help noticing that the bard’s voice sounds strained and a bit husky.

“As I said, I knew the High Bard well. When I was younger. He was like a father to me, once. My own father died when I was very young.”

“How?” Rue asks, then bites his tongue, hoping he hasn’t ruined the flow of information he was finally getting.

“Never you mind,” says the bard. “Anyway, the High Bard—although he was just an ordinary bard back then—raised me and taught me all the art I know. I would have loved to be there by the pyre, singing songs and telling tales about him, but it’s too dangerous.”

“Dangerous?” Rue sits up and stares at his master. “Do you mean with the fire and the patchouli and everything?”

“No,” says the bard. “Dangerous because people are looking for me. Bad people. That’s why I have to keep my hood down, and why I can’t tell anybody who I am.”

“Why are they looking for you? What have you done?” Rue can’t help a touch of morbid excitement creeping into his voice.

“Nothing that interesting,” says the bard. “I just told the wrong story to the wrong people, that’s all.”

“Are the ones looking for you wearing black cloaks?” Rue asks. “With swords underneath?”

“They might be,” says the bard. He reaches out to squeeze Rue’s arm. “Why? Did you see someone like that? Someone watching us at the festival?”

“It was just something you imagined, then,” says the bard, breathing a sigh of relief.

“Not really,” says Rue. He lifts a finger and points back along the downs. “There’s one over there, watching us right now.”

“What?” The bard jumps up, staring westward, where, sure enough,

"This well-crafted adventure will thrill fans of the Longburrow series with its well-drawn characters, dramatic pacing, and occasional humor. An accessible tale of heroism." —Booklist 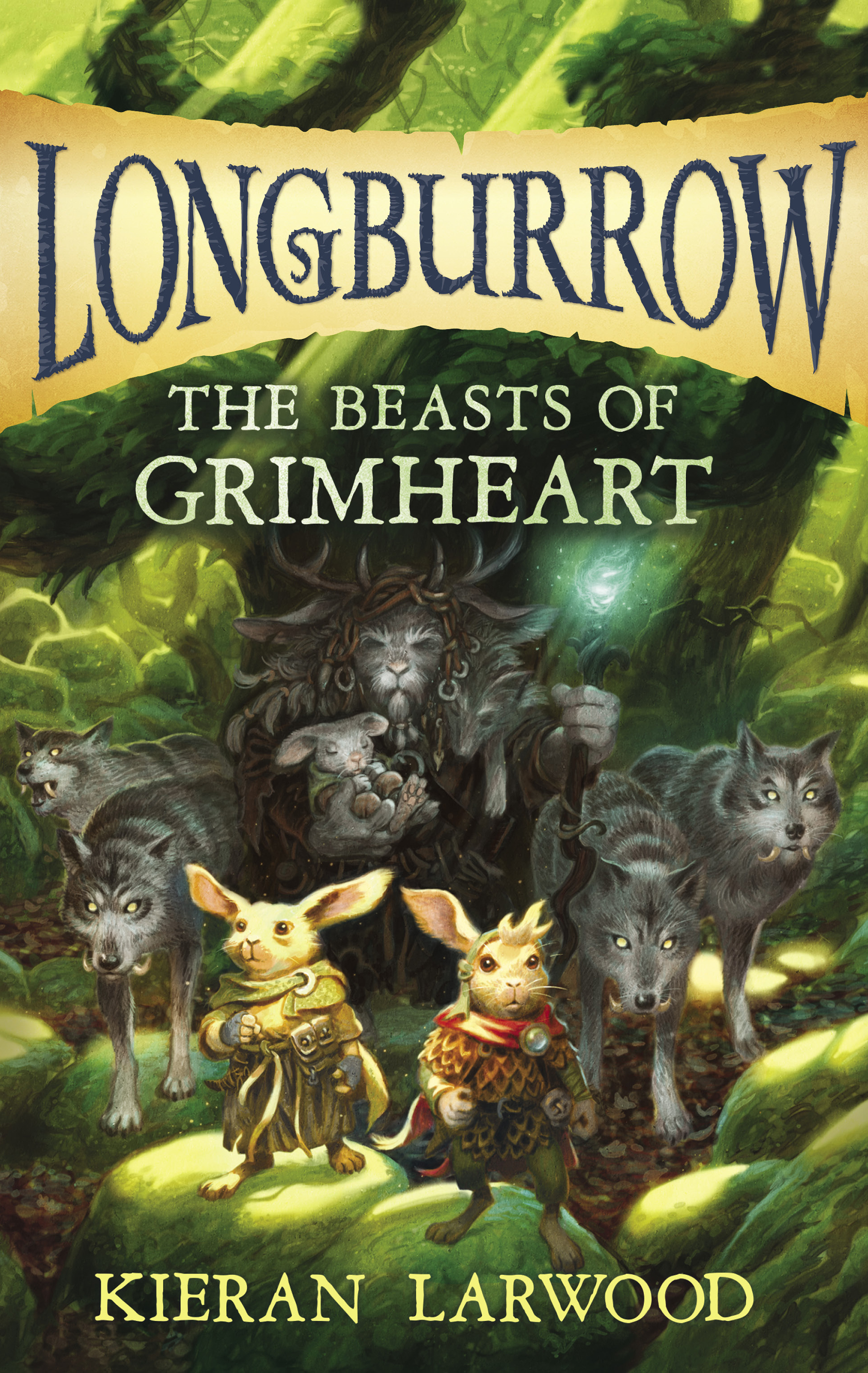