The Adventures of a South Pole Pig: A novel of snow and courage

In this fresh and funny middle-grade novel, Flora the pig ditches the sedentary life on the farm for an adventure in Antarctica, where she escapes the knife and lives her dream of pulling a sled with a team of dogs.

Flora the pig was born for adventure: “If it’s unexplored and needs to get dug up, call me. I’m your pig,” she says. The day Flora spots a team of sled dogs is the day she sets her heart on becoming a sled pig. Before she knows it, she’s on board a ship to Antarctica for the most exhilarating—and dangerous—adventure of her life. This poignant novel of a purposeful pig is sure to become a favorite with any young readers who have ever dreamed of exploring the great beyond.

About the author
Chris Kurtz

Chris Kurtz is a talented teacher, storyteller, and writer. In addition to The Adentures of a South Pole Pig, he wrote the middle-grade novel The Pup Who Cried Wolf and has co-written picture books with his sister Jane Kurtz. He lives in Portland, Oregon, with his family.

Mama, why do we have to live in a cage?” Flora dug in the dirt at something hard and rusty. “Honey, don’t do that.” Her mother nosed heraway. “And it’s not a cage. It’s a pigpen.” “Same thing,” said Flora under her breath.

How unlucky she was—born with adventurous hooves that were stuck inside a pen. But she wasn’t giving up. If there was a way out, Flora said to her- self, she would find it.

She had already packed down trails to each corner of the pen. She had poked her wet snout through every wooden slat to smell the other side. And she had dug holes all along the pen’s perimeter. Usually the only thing hiding under the surface was more dirt—until today. Maybe this hard and rusty something would bring a change in routine.

As soon as her mother turned, Flora went back to digging. She scratched away busily until the thing popped out of the ground.

“I knew it.” Flora gave a little squeal of joy. Now she had to see what it could do.

“Flora!” shouted her mother. Flora took a step back.

Her mother trotted over, and close on her heels were three brothers. Flora had seven, so there was always at least one around to watch her get into trouble.

“Rusty pieces of metal are very dangerous. Why do you insist on unearthing things better left alone?” said her mother.

Flora stamped the ground. “If it’s unexplored then it needs to get dug up.”

“I see,” said Mother. “Well if it is sharp and rusty, then it needs to stay unexplored and underground.” Her mother used her snout to nudge and scoot the nail over to the wooden fence, where there was a space between the ground and the lowest board.

“Mama, wait! I’m not done with that thingy yet.” Flora shoved herself between her mother’s legs.

Her mother pushed her back. “You most certainly are done with this thingy, little one.” With a firm kick, she spun the nail under the board and out of sight.

Flora screwed up her face, not sure if she should stomp or flop on the ground. But before she could choose, her mother lay down with her back against the fence. “Breakfast time!” she called.

A thrill ran through Flora. She was hungry. So were her brothers.

Flora dove for a good spot, only to find herself bumped and turned aside.

“There’s enough for everyone,” Mother said. Nobody  listened.

But Flora, the firstborn of the litter, had sturdy shoulders and strong back legs. When she failed to

push through, she had other ways to make room for herself. Standing on a brother’s ear usually created an opening. And if that didn’t work, she’d use her sharp teeth. Flora found that if she chomped down on a brother’s tail, she could count on a loud squeal and an open space.

A girl had to fight for her food in this family—except against little Alfred, the runt. If he started sniffling, Flora made room for two.

After breakfast was naptime. Little pigs with their tummies round and full of milk flopped against one another on the ground. But Flora thought piglets spent too much of their lives sleeping. Today she pawed her brother’s knee. “Sam, wake up.”

Flora went over to Tommy. His ear was flopped open.

“Go away.” Tommy laid his head back down and folded his ear closed.

Flora returned to Sam. She thought about standing on his tail.

Just behind her someone else grunted. When Flora turned, she saw Alfred smiling and twitching in his sleep.

“Alfred!” She walked over to her littlest brother, who opened his eyes. “It’s time to go exploring.”

“Flora, I have a full tummy, and that always makes me sleepy. Besides, we explored the whole pen yesterday, and there wasn’t one new, excit- ing thing.”

“What about that nail I just dug up?”

Alfred closed his eyes. “New, but not exciting.” “Fine.” Flora turned her back. She had to admit he was right. But if anything exciting ever did pop up, she’d be the first to see it, if she kept exploring.

She trotted over to the manure pile, Flora’s favorite lookout. It was the highest point in the pig- pen and the only place Flora could hope to see anything interesting beyond her small world. She gazed past the shade of the pigpen roof to where the world was bright and sunny—sunny junk heap, sunny grass, sunny cornfield, sunny gravel road. A familiar sound floated in. Flora cocked her head to one side to listen. Dogs. They were barking again.

Now, seeing a dog would be exciting! What would it look like? she wondered. Woolly like a sheep? Horned like a bull? Single-hoofed like a horse or double-hoofed like a pig? One thing was sure, dogs made more noise than all of the other animals put together.

As the barking died down, Flora tilted her head up at the pigpen roof. Sunlight poured through lit- tle holes, showing bits of dust in the air. Flora moved so that one point of light landed on her front leg. This was as much direct sun as Flora ever got. She lay down carefully so that the spot of light stayed on her leg, and she watched it.

It looked like a little star. Mother had told her about the points of light that came out at night, like a hundred eyes, watching and twinkling high above the world. Flora wished she could see those eyes.

When the spot of light moved off her leg, she scrambled up and this time looked all around.Behind her was an empty pigpen. To her right was the open side of the barn. Flora could see through it to the three horse stalls on the far wall. Only one had housed a horse for the last three days. Nessie was quiet except when her hooves knocked against the wooden walls.

Flora turned back to the sunshine and the junk heap.

There were old tires, machine parts, wavy rafts of chicken wire, and broken tools that lay where they had been tossed. In the middle was a wheelbarrow with no wheel, and in its body was a green garden hose coiled around . . .

Flora looked again. Was that a dog? The fur ball stretched and yawned. It had a black ear and a mouth full of sharp teeth. Flora’s front knees trembled. This was new and exciting!

The  creature  stepped  down  from  the  wheel

barrow and walked carelessly toward the pigpen. Should Flora warn her mother? No. She could handle the intruder.

She crept off the manure pile and pushed herself close to the fence where the fur ball might enter, if it was foolish enough to step inside a pigpen guarded by a fierce, sharp-hoofed piglet. She hadn’t woken up today expecting a fight, but this was going to be very satisfying. If some prowling food thief thought it could sneak into her home, Flora was just the pig to teach it a lesson. She crouched.

Sure enough, the fur ball slipped like water through the slats in the...

"It will greatly satisfy fans of Dick King-Smith and E.B. White looking for something similar . . . Engaging fantasy adventure for preteen pig pals."

"An upbeat and lively story."

"There's humor as well as heart, grit as well as tenderness in the telling of this Antarctic adventure tale."

"Loyalty, courage, and optimism are important ideas, and newcomer Kurtz brings us a rollicking story filled with all three."

"Told in the voice of a seasoned storyteller, this novel has chapters that will work perfectly for sharing aloud with younger children or as a read-alone for more competent readers. . . . Move over Wilbur and Babe, there's a new pig in town." 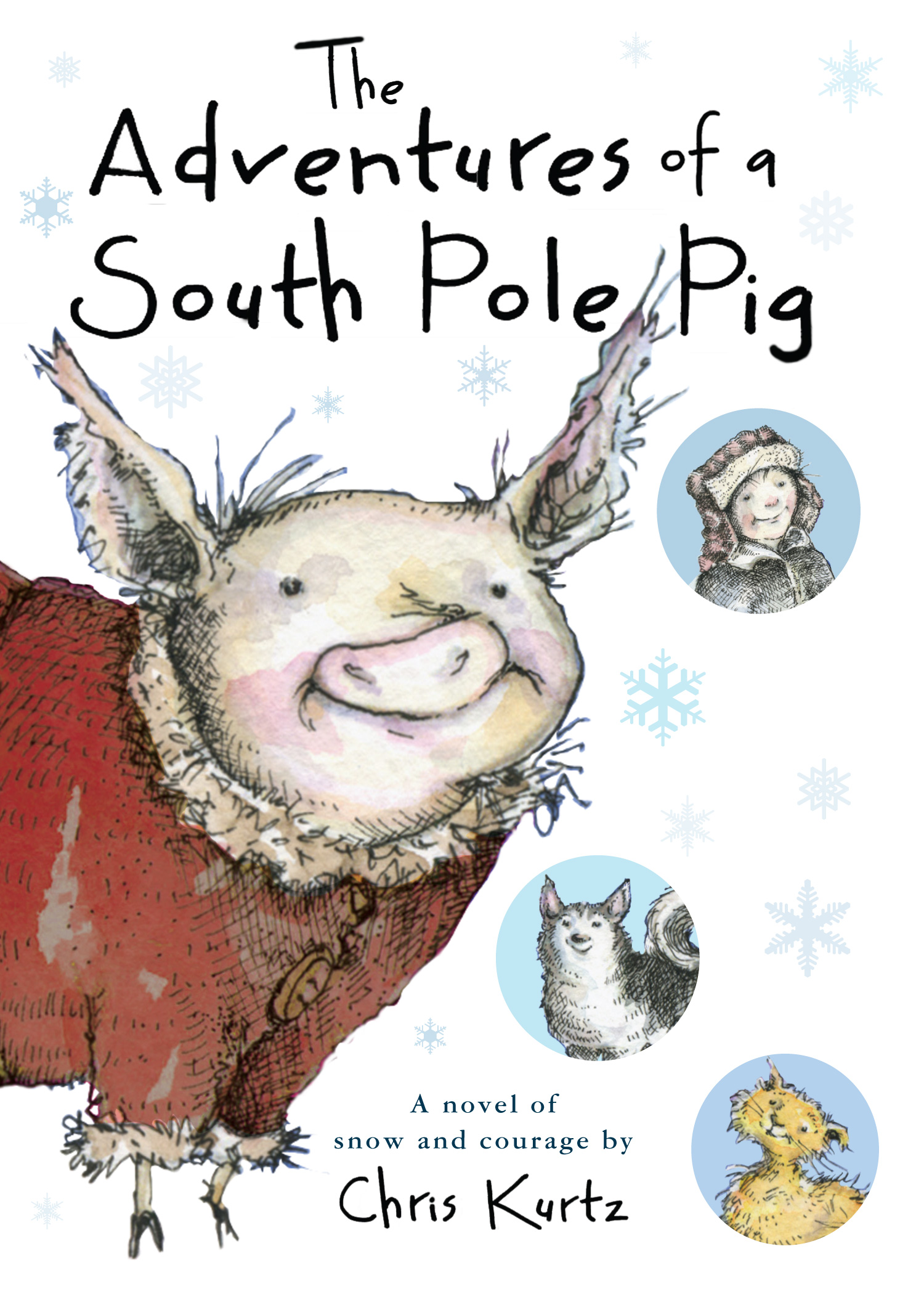