In Sarah Porter’s electric middle grade debut, twelve-year-old Ada is a Chimera, one of a number of children born with human and animal DNA thanks to a genetic experiment gone wrong. When she is shipped off to a quarantined school for other kids like herself, she senses that the facility is keeping a secret, which, if discovered, could upend everything the world knows about how Chimeras came into being.

Twelve-year-old Ada is a Chimera, born with human and animal DNA thanks to a genetic experiment gone wrong. Because being a “kime” is believed to be contagious, she has kept her condition—complete with infrared vision—hidden. But a surprise test outs her, and Ada is shipped off to a quarantined school for kimes.

There Ada meets kids of many different shapes, stripes, and appendages, such as a girl with dragonfly wings and a seal-boy. As she adjusts to her new life, Ada senses that the facility is keeping a secret that could upend everything the world knows about Chimeras. But will someone put a stop to her efforts to uncover the truth?

About the author
Sarah Porter

Sarah Porter is the author of the young adult novels Lost Voices, Waking Storms, The Twice Lost, and Vassa in the Night. She is also an artist and a freelance public school teacher. Sarah and her husband live in Brooklyn, New York. Visit her online at www.sarahporterbooks.com.

The moment Ada ran into the room, she noticed it: a soft ruby glow fuzzing through the dropped newspaper on the sofa, like the red smears left at the end of sunset.

“Ugh,” her father said. “I put my glasses down two seconds ago . . . I was just holding them . . .” He twisted around, his mouth pursed in confusion, and Ada laughed. He was looking right at them!

“Where?” The glow was dimmer now, starting to fade out, but it was still obvious. She could hardly believe he didn’t see it.

“Right there!” She flicked the newspaper aside. Silver frames gleamed against the flowered cushions.

He looked at her, startled. “How did you know? You weren’t in the room when I put them down, were you?”

How could he ask such a silly question? She shook her head hard, baffled at having to explain, and her black pigtails swung out like wings. “I saw them!”

“You saw them. Through the newspaper?” He shoved his glasses on at a haphazard angle and stared at her through the winking lenses. “Are you sure?”

“I saw the glow where things are warm,” Ada told him. Her voice squeaked with impatience. “The red glow!”

He looked from her to the newspaper and back again, his brows pinched together. Then he lifted the paper and let it hang down like a curtain with his other hand hidden behind it. “Ada, sweetheart. This might be serious. How many fingers am I holding up?”

It seemed like a stupid game; she’d known how to count for years. He must realize that. The cloudy shape shone clearly through the paper. But she’d play if he wanted her to.

“No fingers! You’re making a fist.”

He’d started nodding vigorously to himself. “Infrared vision. It has to be. And there might be more. Oh, God. We’ve been so focused on studying the obvious ones that we never even thought to check—?But of course, of course there might be variations that aren’t visible!” The words didn’t make any sense to her, and she was getting bored. She wandered to the window and he followed, then knelt beside her and put his arm around her shoulder. They both looked out on a sky of flat, featureless blue above the shingled houses lining the street. “Ada? Can you describe the sky for me? Try to tell me exactly what you see.”

Another crazy question. Why should she describe it when he could see it too? If Ada hadn’t loved him so much, she might have turned sullen and refused to keep playing. “It’s like peacocks.”

“Like a million peacocks with big curls spinning around. And there are blue waves that try to be purple, but they can’t. And there’s the net over everything, with gold points that go on and off. And—”

His hand clenched so sharply on her shoulder that she broke off with a gasp. His eyes were wide and he was biting his lip. “Oh, Ada. Oh, no. My baby. Listen. Listen to me. You can’t say that. You have to say, ‘The sky is blue.’”

“Because it looks blue to other people. And you can never, ever talk about seeing a glow where something is warm, either. In fact—?oh, how are you supposed to know what we can see?—?maybe it’s best if you never talk about how things look to you at all. Not even to your mother. Do you understand me?”

“But why not?” His urgency was getting to her, making her blood throb in her head. Her eyes felt hot and slippery.

“Because . . .” He hesitated. This was something he badly wanted not to say, she could tell. “Because, Ada, people might think you’re a kime.”

A kime. A monster, a horror: children born with insect eyes or tentacle fingers or twitchy, hairy flippers. Kimes were rejected by their disgusted parents as soon as they were born and sent Somewhere. Ada wasn’t very clear on where, but she pictured a place halfway between a prison and a zoo. Kimes were dangerous; whatever made them into monsters might be catching. She knew, vaguely, that her father went to the Somewhere occasionally to study them.

“I’m not a kime!” How could she be, when she looked exactly like other people? She didn’t have antennae! Tears were brimming in her eyes. She blinked them away, but the rainbow fringe still radiated, as it always did, from her father’s golden skin, and ruby flames surged from his heart. Even through his plaid shirt they were clear to her, racing out and retreating at a quickening beat.

“Of course not, sweetheart. You’re my beautiful, perfect girl. No one could ask for a lovelier daughter. But people might make a mistake. They might think you were a kime, if they heard you say . . . the things you said to me. And that wouldn’t be safe. Not safe at all. Do you understand? You can’t talk like that. Not even—?especially not—?to your mother.” He was squeezing her and stroking her hair to calm her down. “Tell me you understand.”

“But . . .” The thought of never being able to mention anything she saw was closing down on her like a lid. It seemed impossible. She had a sense that there were obscure rules she was expected to follow and she couldn’t guess what they were. “Never say anything I see?”

He chewed his lip. “Yes. I suppose that would be too hard.” He thought a minute. “Then keep it general, keep it bland. Ada, we have to practice.”

She keened and tried to pull away from him, but he held her tight. Fury spiked through her; everything he was saying seemed so horribly unfair. “No!”

“Please, sweetheart. Just for a minute. Please. For me. Say, ‘The sky is blue.’”

For a long moment she fumed in silence, but he wouldn’t stop gazing at her with wide, worried eyes. Ada dropped her head and muttered, “The sky is blue.”

He pointed to the flowers bursting under the window, to the climbing roses shaking on the trellis. “‘I like flowers. They’—?yes, yes, that’s safe—?‘they have a lot of pretty colors.’”

“They have a lot of pretty colors.&rdquo...

"Animal-lovers and sci-fi addicts will be hooked." —Booklist

"An inventive, charming tale with a strange mix of science and fantasy." —Kirkus Reviews

Young adult author Porter makes her middle grade debut with a well-written, engaging tale of friendship that is peppered with intrigue. A strong purchase for readers who enjoy mysteries with fantasy elements." –SLJ

A pleasing combination of energy and introspection, this is a mix that will land with both the thinkers and the doers." —Bulletin
We’re sorry 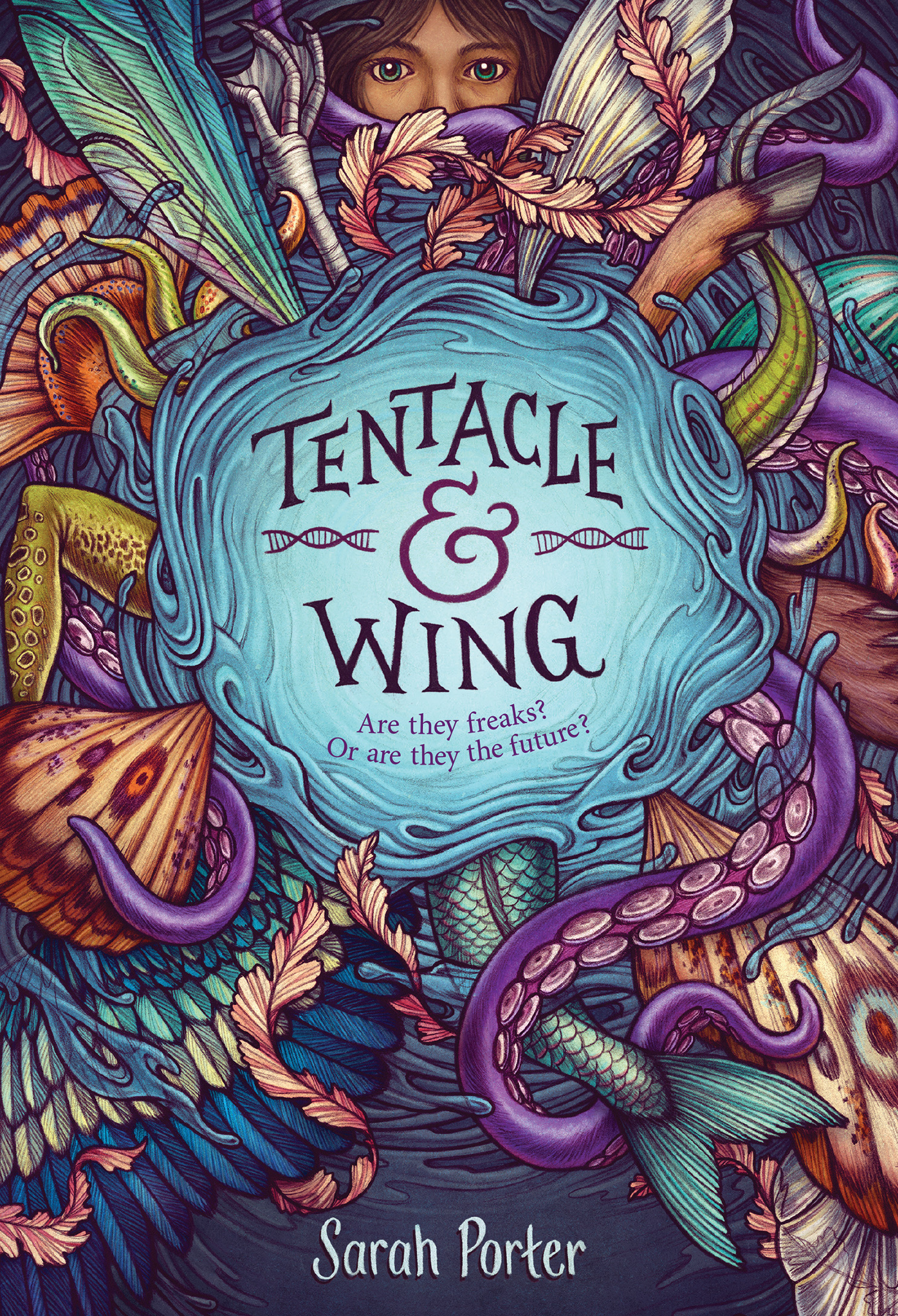