Shortlisted for the Sunday Times Young Writer of the Year Award

“I read Stubborn Archivist in a ravenous gulp. It’s stunning: so articulate about what it means to live between two languages and countries, tenderly unravelling the knots of unbelonging.”—Olivia Laing, author of TheLonely City and Crudo

A mesmerizing and witty debut novel about a young woman growing up between two disparate cultures, and the singular identity she finds along the way

“I read Stubborn Archivist in a ravenous gulp. It’s stunning: so articulate about what it means to live between two languages and countries, tenderly unraveling the knots of unbelonging.”

—Olivia Laing, author of The Lonely City and Crudo

For fans of Chemistry and Normal People: A mesmerizing and witty debut novel about a young woman growing up between two disparate cultures, and the singular identity she finds along the way

But where are you really from?

In Stubborn Archivist, a young British Brazilian woman from South London navigates growing up between two cultures and into a fuller understanding of her body, relying on signposts such as history, family conversation, and the eyes of the women who have shaped her—her mother, grandmother, and aunt. Our stubborn archivist takes us through first love and loss, losing and finding home, trauma and healing, and various awakenings of sexuality and identity. Shot through the novel are the narrator's trips to Brazil, sometimes alone, often with family, where she accesses a different side of herself—one, she begins to realize, that is as much of who she is as anything else.

A hypnotic and bold debut, Stubborn Archivist is as singular as its narrator; a novel you won't soon forget.

About the author
Yara Rodrigues Fowler

YARA RODRIGUES FOWLER was born in 1992. She grew up in a British Brazilian household in Balham, South London, where she is still based. She has an BA from Oxford University and an MA from University College London, and is a trustee of Latin American Women's Aid. Stubborn Archivist is her first book.

THE BIG HOUSE appeared from behind conker trees on a quiet street by the common.

They had come just the two of them, for one of the first times since the baby was born they were out together.

Richard opened the iron gate and stepped into the front garden. It was regrowing untidy with the spring.

He turned to his wife. We’ll get rid of this gravel. I could plant a ceanothus here by the path.

Isadora looked at him. Which is that?

It has those tiny flowers that fall like grey blue dust onto the floor. Richard spread his arms—Over time it can grow into a large bush.

She nodded. It is very nice that one.

She touched the morose little bird depicted in the off-brown stained glass of the door.

She looked at Richard.

We can get rid of this, no?

It’s depressing. I want bright yellow birds or soft orange squares or something.

She laughed at him—I’m serious Richard.

Inside, he ran his hand along the ribbed wall of the corridor, taking slow strides towards the back of the house.

Isadora stood behind him in the corridor. She regretted its closed door presence. Unlike her husband, she felt no secret thrill at its twee Victorian geometries—the cracked diamond

But—she called her husband’s name—but Richard, I don’t see the point of such a big house.

I like the little flat. We are just three after all. We don’t need a big house like this.

He turned to face her.

He frowned at her, and then he smiled. But what happens when your mum comes to stay, and your father? And don’t you want Ana Paula to have her own room and not sleep on the sofa and be woken up when we go to work?

And eventually the baby will want her own space.

It’s only down the road. It’s not a big change.

She put two arms around him. I know this. You are right. I just like the flat.

And then her husband said—Isadora this is a good house. Look.

They walked down the corridor to the dark kitchen that needed new cabinets. On the back wall there was a door and a set of concrete steps.

Look at this garden.

Isadora looked at it.

Hot sunlight crossed its long and low sunk rectangle through the alley gaps between the other houses. It was full of knee height nettles and other grass green plants she didn’t know the names of. At the back of the garden, by the fence, there was a row of lime trees.

Then she said—We could have a dog, Richard.

Richard said—Where I grew up we had a huge garden. This is small but it’s good for London.

Isadora nodded. At her parents’ house Isadora had not had this sort of garden either.

When she had thought of Europe, Isadora had always imagined herself walking into an open plan room with glass for walls.

That night in the flat, while the baby was asleep, Isadora whispered—

Richard did I ever tell you about my mother’s yellow house?

My dad said he will put a pool there, for the baby.

That is very kind of him.

We could go at Christmas.

Christmas at the beach!

I would certainly enjoy that—

The baby made a noise.

Of course, they bought it. Even in 1992 with the derelict house next door and the late night activity on the common it was all their savings and a mortgage it would take them twenty years to pay off, but they bought it. As Richard had said, this was a good house.

Both of them had been brought up to buy a house. Go to medical school, and then buy a house like we bought this house, their parents had told them.

Shortlisted for the Sunday Times Young Writer of the Year Award

Longlisted for the Dylan Thomas Prize

Longlisted for the Desmond Elliott Prize

One of "8 Latinx Book Recommendations From the Founders of The Latinx Read-A-Thon" (O, the Oprah Magazine)

"It has become something of a book booster’s cliché (and fib) to say they read a work 'in one gulp.' Yet twenty-something Brazilian-British author Yara Rodrigues Fowler’s transfixing Stubborn Archivist was engineered to go down faster than a 400-page novel has any right to. Mixing traditional prose with poems and flash fiction, her words whiz by like text message chains...It’s a unique work with a dedication to match: 'For Myself.'"

“I read Stubborn Archivist in a ravenous gulp. It’s stunning: so articulate about what it means to live between two languages and countries, tenderly unravelling the knots of unbelonging.”

"Stubborn Archivist is an intimate and wonderfully resourceful exploration of origins. In its quest to uncover what a person is made of it digs deeply into the living body, as well as tracing back through its tangled roots. Visceral and elegant, circumspect and vivid, Yara Rodrigues Fowler has a distinctly unhampered way of telling a story; I liked Stubborn Archivist very, very much."

“Intimate, rebellious, and meditative, Yara Rodrigues Fowler's exquisite deconstruction of a transnational life already in fragments will leave you spinning. Stubborn Archivist is wholly original and heralds the arrival of a remarkable new talent.”

—Patricia Engel, author of The Veins of the Ocean and others

“Yara Rodrigues Fowler’s debut is unlike any other book you’ve read. A blend of prose and poetry, it’s a collection of short pieces that gradually cohere into a larger narrative…Holding the disparate elements together is a strong sense of identity and voice…Flitting nimbly through generations, between Brazil and south London, between dating and dictatorship, this is a novel that is personal and political – and its unusual form is integral to its power.”

"This novel beautifully explores the notion of home, belonging and trauma for people who, like this Brazilian-English writer, find themselves growing up between languages and cultures and identities. Written through collected bits and conversations the protagonist archives, this is a unique book you’ll be able to read in one immersive sitting."

"A young Brazilian-British woman finds her footing between cultures in Rodrigues Fowler’s formally ambitious, captivating debut...Moving back and forth through time, alternating short prose sections with poems and pauses, and at times switching to Portuguese as the narrator 'finds the other words,' Rodrigues Fowler writes frankly and imaginatively of the felicities and difficulties of adolescence and family ties, and of learning 'to wrap your life around another person’s life.' This is a powerful debut."

—Publishers Weekly, "Books of the Week"

"In this artful debut, snatches of dialogue and prose-poetry illuminate the experience of growing up with a mixed identity...Rodrigues Fowler [executes] it so well, so warmly, with such a lived sense of how nothing is one thing or another, but probably both and neither...Tender, sharp, generous, she holds all these things lightly, up to the light."

"This is a work of inclusion and omission, of unearthing and rearranging...Funny, painful, and healing...Stubborn Archivist [has] a singular intimacy...Rodrigues Fowler writes a story of multicultural identity as it is impressed upon the physical bodies that live it."

"An #OwnVoices triumph...A daring debut novel, when the narrative is a mix of stunning prose and poetry...We need more novels like this, novels that tell stories that haven’t been told before. What is interesting about Stubborn Archivist is that it feels completely new, even though these stories have been told by word-of-mouth through generations of immigrant women. We need more novels that make people like me feel deeply seen as an immigrant, a Brazilian woman, and a daughter."

“What a treat. So lyrical, playful and brave. I wish it had existed when I was younger, growing up between London and Brazil; it would have made me feel less alone.”

—Luiza Sauma, author of Flesh and Bone and Water, on Twitter

“[A] formally ambitious, captivating debut....Rodrigues Fowler writes frankly and imaginatively of the felicities and difficulties of adolescence and family ties, and of learning ‘to wrap your life around another person’s life.’ This is a powerful debut.”

“This beautiful debut is bursting with wit and self-awareness that make for an intensely pleasurable read. Fowler vividly captures the struggle of growing up in two cultures through a unique and lyrical narrative while seamlessly shifting between the past and present. This poetic novel will keep readers engaged from beginning to end.”

“[A] captivating, unconventional novel...This novel seeps with the sweet satisfaction of staking a place in the world.”

"In a world where the terms ‘borders’ and ‘migrants’ are becoming increasingly hijacked by politics, Rodrigues Fowler’s debut novel is a timely exploration of what it means to understand past and present and the delicate balance of embracing two cultures simultaneously. It’s also not afraid of exploring the trauma and politics of being female. Written in short, sharp bursts of poetry and prose, Rodrigues Fowler unites a very English culture with a Brazilian heritage turning a unstinting eye on the all-too-familiar conversations that second generations wearily face...Original and thought-provoking, this is a book that’s well worth your time."

“Stubborn Archivist is a little like finding someone’s notebook on a long train journey and reading it cover to cover by the time you reach your destination…It has the effect of being real.”

"A mixture of poetry, prose and a smatteri... 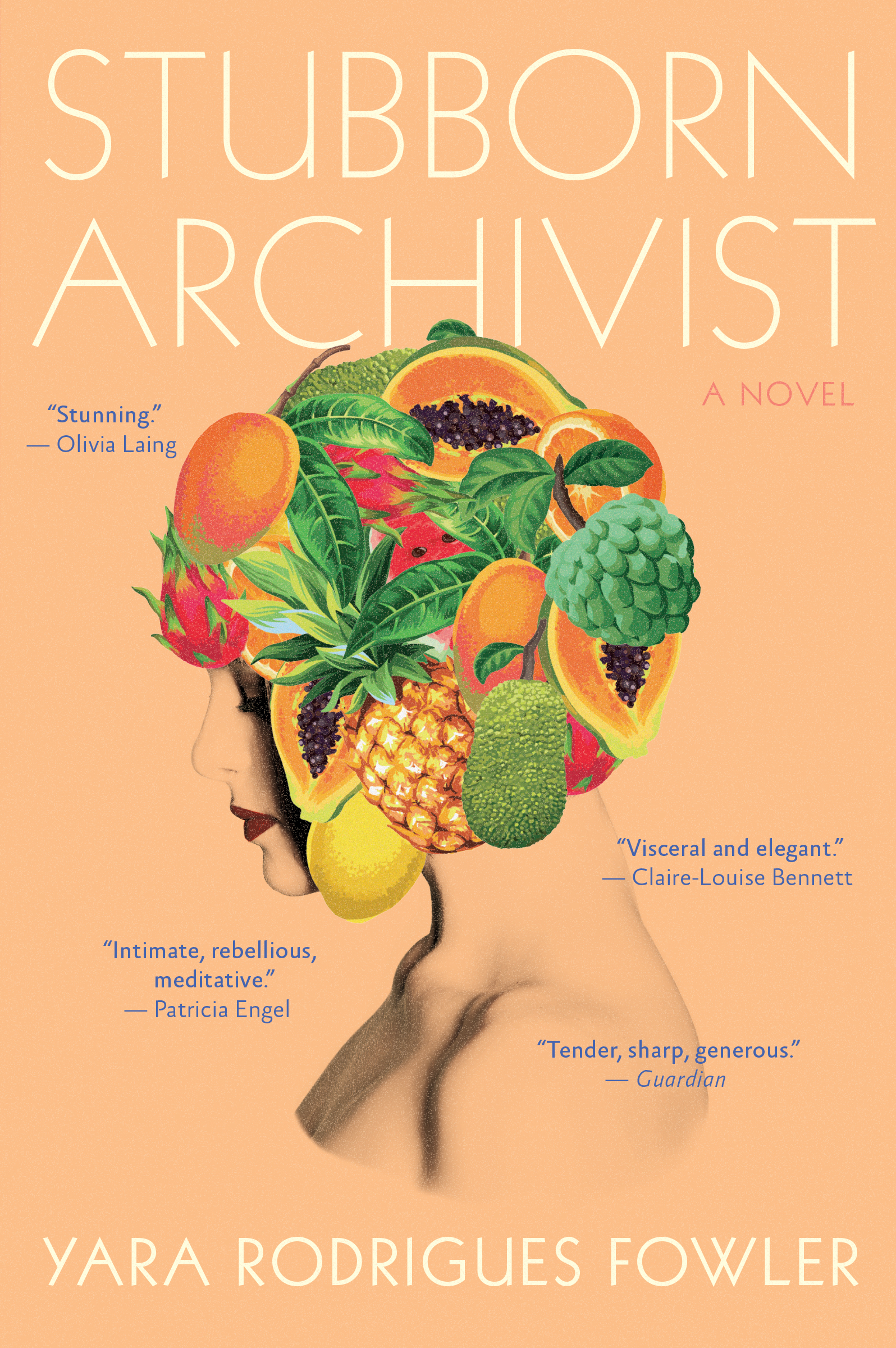