Star of the Sea

In the bitter winter of 1847, from an Ireland torn by famine and injustice, the Star of the Sea sets sail for NewYork. On board are hundreds of refugees, some optimistic, many more desperate.

As urgently contemporary as it is historical, this exciting and compassionate novel builds with the pace of a thriller to a stunning conclusion.

In the bitter winter of 1847, from an Ireland torn by famine and injustice, the Star of the Sea sets sail for NewYork. On board are hundreds of refugees, some optimistic, many more desperate. Among them are a maid with a devastating secret, the bankrupt Lord Merridith, his wife and children, and a killer stalking the decks, hungry for the vengeance that will bring absolution.

This journey will see many lives end, others begin anew. Passionate loves are tenderly recalled, shirked responsibilities regretted too late, and profound relationships shockingly revealed. In this spellbinding tale of tragedy and mercy, love and healing, the farther the ship sails toward the Promised Land, the more her passengers seem moored to a past that will never let them go.

As urgently contemporary as it is historical, this exciting and compassionate novel builds with the pace of a thriller to a stunning conclusion.

About the author
Joseph O'Connor

Joseph O'Connor is the author of several widely acclaimed novels, including Cowboys & Indians, Desperadoes, and The Salesman. He has also written criticism, plays, and screenplays, and edited Yeats Is Dead! He lives in Dublin.

The FIRST of our TWENTY-SIX days at Sea:

in which Our Protector records some essential Particulars,

and the Circumstances attending our setting-out.

MONDAY THE EIGHTH DAY OF NOVEMBER,

The following is the only register of Josias Tuke Lockwood, Master of Vessel, signed and written in his own hand; and I attest it on my solemn honour a compleat and true account of the voyage, and neither has any matter pertinent been omitted.

NAME OF VESSEL: The Star of the Sea (formerly the Golden Lady).

DISTANCE: 2,768 nautical miles direct: to be factorised for tacking into westerlies.

One passenger, a certain Meadowes, is lodged in the lock-up for drunkenness and fighting. (A hopeless out-and-outer: he shall have to be watched.) Suspected case of Typhus Fever moved to the hold for isolation.

Be it recorded that this day three passengers of the steerage class died, the cause in each case being the infirmity consequent on prolonged starvation. Margaret Farrell, fifty-two yrs, a married woman of Rathfylane, Enniscorthy, County Wexford; Joseph English, seventeen yrs (formerly, it is said, apprenticed to a wheelwright) of no fixed place but born near Cootehill, County Cavan; and James Michael Nolan of Skibbereen, County Cork, aged one month and two days (bastard child).

Their mortal remains were committed to the sea. May Almighty God have mercy upon their souls: 'For here have we no continuing city, but we seek the one to come.'

We have thirty-seven crew, 4021/2 ordinary steerage passengers (a child being reckoned in the usual way as one half of one adult passenger) and fifteen in the First-Class quarters or superior staterooms. Among the latter: Earl David Merridith of Kingscourt and his wife the Countess, their children and an Irish maidservant. Mr G.G. Dixon of the New York Tribune: a noted columnist and man of letters. Surgeon Wm. Mangan, M.D. of the Theatre of Anatomy, Peter Street, Dublin, accompanied by his sister, Mrs Derrington, relict; His Imperial Highness, the potentate Maharajah Ranjitsinji, a princely personage of India; Reverend Henry Deedes, D.D., a Methodist Minister from Lyme Regis in England (upgraded); and various others.

As we sailed this day came heavy news of the wreck of the Exmouth out of Liverpool on the 4th ult. with the loss of all 2391/2 emigrants on board and all but three of the crew. May Almighty God have mercy upon their souls: and may He bestow greater clemency upon our own voyage; or at least observe it with benign indifference.

The SECOND evening of the Voyage: in which a certain

important Passenger is introduced to the Reader.

The Right Honourable Thomas David Nelson Merridith, the noble Lord Kingscourt, the Viscount of Roundstone, the ninth Earl of Cashel, Kilkerrin and Carna, entered the Dining Saloon to an explosion of smashing glass.

A steward, a Negro, had stumbled near the doorway, bucked by a sudden roll of the vessel, letting slip an overloaded salver of charged champagne flutes. Someone was performing an ironic slow-handclap at the fallen man's expense. An inebriated mocking cheer came from the farthest corner: 'Huazzah! Bravo! Well done, that fellow!' Another voice called: 'They'll have to put up the fares!'

The steward was on his knees now, trying to clear the debris. Blood was rivuleting down his slender left wrist, staining the cuff of his brocaded jacket. In his anxiety to collect the shards of shattered crystal he had sliced open his thumb from ball to tip.

'Mind your hand,' Lord Kingscourt said. 'Here.' He offered the steward a clean linen handkerchief. The man looked up with an expression of dread. His mouth began to work but no sound came. The Chief Steward had bustled over and was barking at his subordinate in a language Merridith did not understand. Was it German, perhaps? Portuguese? Saliva flew from his mouth as he hissed and cursed the man, who was now cowering on the carpet like a beaten child, his uniform besmirched with blood and champagne, a grotesque parody of commodore's whites.

'David?' called Merridith's wife. He turned to look. She had half risen from her banquette at the Captain's table and was gaily beckoning him over with a bread-knife, her knotted eyebrows and pinched lips set in a burlesque of impatience. The people around her were laughing madly, all except the Maharajah, who never laughed. When Merridith glanced back towards the steward again, he was being chivvied from the saloon by his furious superior, the latter still bawling in the guttural language, the transgressor cradling his hand to his breast like a wounded bird.

Lord Kingscourt's palate tasted acridly of salt. His head hurt and his vision was cloudy. For several weeks he had been suffering some kind of urinary infection and since boarding the ship at Kingstown, it had worsened significantly. This morning it had pained him to pass water; a scalding burn that had made him cry out. He wished he'd seen a doctor before embarking on the voyage. Nothing for it now but to wait for New York. Couldn't be frank with that drunken idiot Mangan. Maybe four weeks. Hope and pray.

Surgeon Mangan, a morose old bore by day, was already pink in the face from drinking, his greasy hair gleaming like a polished strap. His sister, who looked like a caricature of a cardinal, was systematically breaking the petals off a pale yellow rose. For a moment Lord Kingscourt wond...

PRAISE FOR STAR OF THE SEA

“In Star of the Sea, O’Connor has written not only an epic novel, but also a very important one. By deconstructing the most defining moment of Irish history, and breaking down its essential components, he has given a face and a voice to the million who died.”

“Along the way O’Connor even brings in a thoroughly gripping murder mystery that is all the more affecting for the depth he gives his characters. They add up to a powerfully symbolic microcosm of the time. Bottom Line: Shining Star.”—PEOPLE 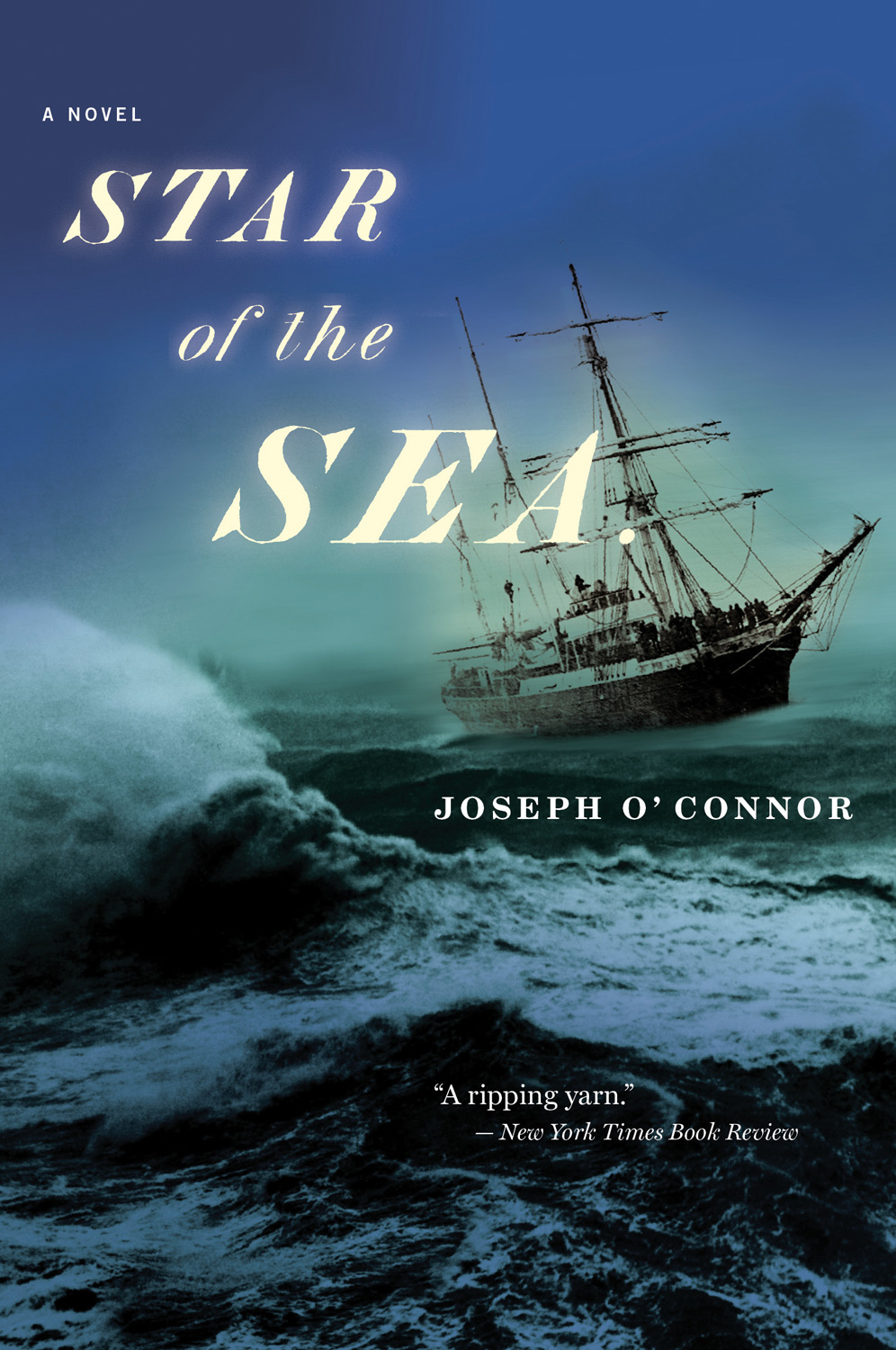