Sniffer Dogs: How Dogs (and Their Noses) Save the World

Readers will discover how detection dogs are able to use their noses to find everything from people, both alive and dead, to explosives to . . . whale poop. These working dogs work to please, work to play, and work for love.

Anyone who has ever spent time with a dog knows that dogs love sniffing! They sniff out hidden food, dirty socks, and the visitor who comes to the door.  But some dogs work with police officers, soldiers and even scientists to put their "sniffers" to work.  Sniffer dogs make use of the amazing biology behind their noses to protect people from bombs, catch criminals smuggling drugs, or help researchers locate a hard to find snail in a forest.

A dog's nose is so sensitive that if a human could see as well as a dog could smell, we would be able to see the small letters on an eye chart from four (four!) miles away.  Is it any wonder then that dogs can be trained to find missing people in piles of rubble or a certain flower blooming amongst hundreds or thousands of other smells?

In Sniffer Dogs you will meet many dogs and their handlers and learn all about their jobs. Some of these dogs are raised from birth to detect blood sugar levels in their owners.  Others are rescued from animal shelters and their boisterous personalities help make them excellent sniffer dogs. Featuring a balance between science and social science, Sniffer Dogs will appeal to dog lovers and science lovers alike.

About the author
Nancy Castaldo

Nancy Castaldo has been writing about the planet for decades. She's contributed to the Sierra Club Waste Paper, NRDC's Personal Action column, and others. She is the author of many STEM books including,  Sniffer Dogs: How Dogs (and Their Noses) Save the World, Back from The Brink: Saving Animals From Extinction, and Beastly Brains: Exploring How Animals Think, Talk, and Feel. She lives in New York's Hudson Valley. Visit her at nancycastaldo.com, on Twitter @NCastaldoAuthor, and on Instagram @naturespeak.

Eli, a four-year-old bomb-sniffing black Labrador, was assigned to work alongside Marine Pfc. Colton Rusk, an improvised explosive device detection dog handler. The two left for a tour in Afghanistan on September 23, 2010, Colton’s twentieth birthday, and became inseparable. In fact, Colton often broke protocol by letting Eli sleep with him on his cot instead of in the regulation kennel on the floor. And on his Facebook page Colton wrote under a photo of Eli, “What’s mine is also his.” There was no question of the bond the two shared.

On December 6, 2010, just a few months after arriving in Afghanistan, Colton was hit by sniper fire while on patrol and was killed. His dog, Eli, stood guard, crawling on top of his partner’s body, not leaving its side, even when Colton’s fellow soldiers came to retrieve it.

Colton’s family knew how close the two had been. Phone calls home always included news about Eli. When the family lost Colton, they decided that Eli needed to come home to them. Thanks to new legislation, the Rusk family was able to petition the military to receive the retired military canine. On February 3, the Rusk family headed to Lackland Air Force Base in Texas to bring Eli home. Eli was formally retired from the military and adopted into the Rusks’ civilian home. When Colton’s obituary was written, Eli was listed first among his surviving family members.

The sun was shining and a cool breeze blew on the South Indian Pondicherry shore in December of 2004. No one had a clue that a huge earthquake, measuring over 9 on the Richter scale, had shifted the plates underneath the ocean floor more than fifteen miles (25 kilometers) away. A woman named Sangeeta walked on the beach with her three sons and their scraggly yellow puppy named Selvakumar, as she did every day. Her husband had just returned from fishing when he heard the ocean’s strange rumblings. Then he saw the waves, close to thirty-three feet (10 meters) high. He ran to a nearby roof and shouted to his wife to run.

She grabbed the hands of her two youngest boys. Her older son, Dinakaran, could run by himself. But when she reached safety, Dinakaran was not behind her. He had run to the family hut only forty yards (37 meters) from the shore. Luckily Selvakumar went after him. The dog clenched the boy’s shirt collar between his teeth and coaxed him out of the collapsing hut to safety. The tsunami that hit the beach that day took thousands of lives across South Asia, but Dinakaran was not among them. Salvakumar was a hero.

There are many stories like these, but your dog doesn’t have to save your life or do anything extraordinary for you to know that you share a strong bond. It’s easy to see. Just walk in the door and experience a dog greeting: tail wags, tongue licks, and unbridled enthusiasm, just because you came back home. It’s what dogs do. They display this behavior in the wild with their puppies, and they act the same with us.

The bond is reciprocated. Dog owners have been known to risk their own lives for their beloved pets. Take Ann Elizabeth Isham, for example. Isham was a first-class passenger on the Titanic, one of only four female first-class passengers who perished in the disaster. It is commonly believed that when her Great Dane was denied a place in a lifeboat, she refused to leave without it. Their bodies were both found floating in the sea after the ship sank. Reports say that her frozen arms were wrapped around the dog’s neck, but it has never been proven that the woman found floating alongside the dog was actually Ann Isham.

Fortunately, not all the dogs aboard the ship perished. Three tiny dogs were smuggled into the lifeboats by their owners. If Isham’s Great Dane had been small enough, without a doubt she would have been one of those owners.

Dogs have been man’s (and woman’s!) best friend for thousands of years. Scientists aren’t quite sure just when dogs, which are descended from wild wolves, became domesticated, but there is plenty of evidence of our early bonding, including ancient burial sites. Archaeologists uncovered evidence of one of the earliest domesticated dogs in a 14,000-year-old joint burial site in Germany, known as Bonn-Oberkassel, which contained the remains of a human and a dog.

Was that dog a pet? Did it help that human hunt? Did they die together? We might never know all the answers, but we can surmise that the dog bur¬ied beside the human was important to the person who died. Visitors to fourth-century Roman catacombs can see images of dogs carved into the marble grave markers of their masters.

There are more than seventy-eight million dogs sharing their lives with us in the United States. Dog owners spend on average $1,500 per year on food, treats, boarding, and grooming for their beloved pets. But the people of the United States aren’t alone in their enthusiasm for these loyal, furry friends. There are many millions more through¬out the world. In fact, dogs are the only animals that have found their way into every human culture.

Perhaps the oldest job dogs have had is to help us hunt for food. The artist George Catlin wit¬nessed the relationship between the Native Amer¬ican tribes he visited in the 1800s and their dogs. The dogs hunted with their humans and, Catlin wrote, were “equal partners in the chase.” He also wrote that “the dog, amongst all Indian tribes is more esteemed and more valued than amongst any part of the civilized world.” Even then the dog was used as a symbol of fidelity. Catlin’s work is just more evidence of our strong bond and early reliance on working dogs.

Have you ever seen a spotted Dalmatian at a firehouse? Dalmatians, the famous black and white firehouse mascots, were once indispensable working dogs to firefighters. Once known as the English coach dogs or the carriage dogs, Dalma¬tians ran alongside horse-drawn coaches, carriages, or steam engines. The smooth-coated, spotted dogs developed strong ties with the horses pulling carriages as early as the seventeenth century. They helped the horses keep pace and protected them from the wild dogs that nipped at their legs. Once at the scene of a blazing fire, the dogs would stand guard, protecting the strong, valuable horses and expensive equipment from thieves while the firefighters fought the flames.

During World War I and World War II, dogs were used to help locate injured soldiers on or near the battlefield. These dogs were often called casualty or ambulance dogs. They also were used by the military as scouts, trackers, sentries, and messengers. In addition, they helped detect mines.

In 1929 dogs found another type of service: they became our eyes. That year the Seeing Eye, the oldest Seeing Eye dog training school in the world, graduated its first two students in the United States—Gala and Tartar. The school was the brainchild of Frank Morris.

As a blind, twenty-year-old student at Vanderbilt University, Morris learned of dogs being trained in Switzerland to help blind people navigate their world. He was able to travel there and obtain a dog named Buddy. When the two returned to the United States, Morris wanted to share the newfound freedom he had gained with others who were blind. He began a school in Tennessee that would change the lives of blind people in the United States and inspire the use of dogs in many other service areas.

Who would think that almost a century later we would hear about a Seeing Eye dog named Roselle who wou...

* "An exemplary presentation of information in a lively, engaging way—readers will be left feeling awe for their canine companions and enthusiasm for their abilities."

"Superb coverage of the canine contribution to rescue and safety in both text and illustration."

"A well-organized, thoughtfully written title that celebrates the achievements of these great dogs."

"This fascinating account will leave young readers feeling wonder and gratitude for the gifts of the canine set."

"The adventurous element of search and rescue and military duty adds an edge to draw readers unenticed by (or unwilling to be caught with) mere cute puppies." 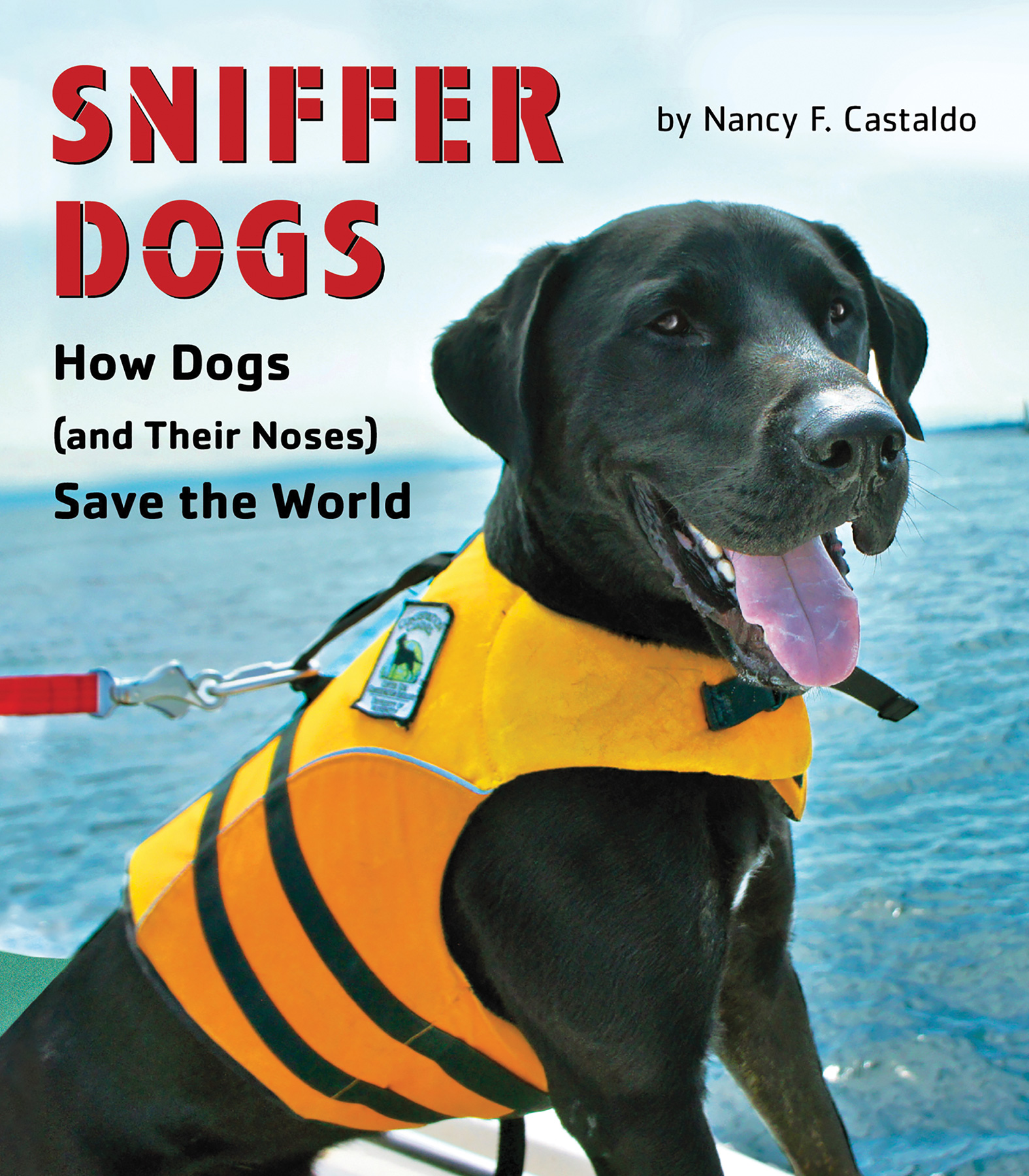