Slammerkin is a "colorful romp of a novel" (The New York Times Book Review) from Emma Donoghue, the national bestselling author of Room.

From Emma Donoghue, the national bestselling author of Room, Slammerkin is "[a] colorful romp of a novel" (The New York Times Book Review) following one woman's journey of self-discovery and survival at the dawn of the industrial revolution in eighteenth century England.

Born to rough cloth in Hogarth's London, but longing for silk, Mary Saunders's eye for a shiny red ribbon leads her to prostitution at a young age. A dangerous misstep sends her fleeing to Monmouth, and the position of household seamstress, the ordinary life of an ordinary girl with no expectations.

But Mary has known freedom, and having never known love, it is freedom that motivates her. Mary asks herself if the prostitute who hires out her body is more or less free than the "honest woman" locked into marriage, or the servant who runs a household not her own? And is either as free as a man? Ultimately, Mary remains true only to the three rules she learned on the streets: Never give up your liberty. Clothes make the woman. Clothes are the greatest lie ever told.

The ribbon had been bright scarlet when Mary Saunders first laid eyes on it, back in London. 1760: she was twelve years old. The fat strip of satin was the exact colour of the poppies that grew in Lambs Conduit Fields at the back of Holborn, where the archers practised. It was threaded into the silver hair of a girl Mary used to look out for at the Seven Dials.

Mary's mother-known as Mrs Susan Digot ever since she'd remarried, a coalman this time-had told her daughter often enough not

to pass through the Seven Dials on her way back from Charity School.

A pond for the worst scum in London, she called the Dials. But the warnings drew the girl like a hot fire on a winter's night.

Besides, she was never in a hurry to get home. If it was still light when Mary reached the family's two-room cellar on Charing Cross Road, she knew what she'd see through the low scuffed window: her mother shipwrecked in a sea of cheap linen, scaly fingers clinging to the needle, hemming and cross-stitching innumerable quilted squares while the new baby wailed in his basket. There was never anywhere to sit or stand that wasn't in the way or in the light. It would be Mary's job to untie the baby's foul swaddlings, and not say a word of complaint because, after all, he was a boy, the family's most precious thing. William Digot-the Digot man, as she mentally called her stepfather-wouldn't get home from work for hours yet. It would be up to Mary to stand in the pump queue on Long Acre till nightfall for two buckets of water so he could wash his face white before he slept.

Was it any wonder, then, that she preferred to dawdle away the last of the afternoon at the Dials, where seven streets thrust away in seven different directions, and there were stalls heaped with silks, and live carp butting in barrels, and gulls cackling overhead, and the peddler with his coats lined with laces and ribbons of colours Mary could taste on her tongue: yellow like fresh butter, ink black, and the blue of fire? Where boys half her size smoked long pipes and spat black on the cobbles, and sparrows bickered over fragments of piecrust? Where Mary couldn't hear her own breath over the thump of feet and the clatter of carts and the church bells, postmen's bells, fiddles and tambourines, and the rival bawls of vendors and mongers of lavender and watercress and curds-and-whey and all the things there were in the world? What d'ye lack, what d'ye lack?

And girls, always two or three girls at each of the seven sharp corners of the Dials, their cheeks bleached, their mouths dark as cherries. Mary was no fool; she knew them for harlots. They looked right through her, and she expected no more. What did they care about a lanky child in a grey buttoned smock she was fast outgrowing, with all her damp black hair hidden in a cap? Except for the girl with the glossy scarlet ribbon dangling from her bun, and a scar that cut through the chalky mask of her cheek-she used to give Mary the odd smile with the corner of her crooked mouth. If it hadn't been for the jagged mark from eye to jaw, that girl would have been the most gorgeous creature Mary had ever seen. Her skirts were sometimes emerald, sometimes strawberry, sometimes violet, all swollen up as if with air; her breasts spilled over the top of her stays like milk foaming in a pan. Her piled-high hair was powdered silver, and the red ribbon ran through it like a streak of blood.

Mary knew that harlots were the lowest of the low. Some of them looked happy but that was only for barefaced show. "A girl that loses her virtue loses everything," her mother remarked one day, standing sideways in the doorway as two girls flounced by arm in arm, their vast pink skirts swinging like bells. "Everything, Mary, d'you hear? If you don't keep yourself clean you'll never get a husband."

Also they were damned. It was in one of those rhymes Mary had to learn at School.

The harlot, drunkard, thief and liar,

All shall burn in eternal fire.

On cold nights under her frayed blanket she liked to imagine the heat of it, toasting her palms: eternal fire! She thought of all the shades a flame could turn.

Mary owned nothing with a colour in it, and consequently was troubled by cravings. Her favourite way to spend any spare half hour was to stroll along Piccadilly, under the vast wooden signs that swung from their chains; the best was the goldbeater's one in the form of a gigantic gilded arm and hammer. She stopped at each great bow of a shop window and pressed her face to the cold glass. How fiercely the lamps shone, even in daylight; how trimly and brightly the hats and gloves and shoes were laid out, offering themselves to her eyes. Cloths of silver and ivory and gold were stacked high as a man's head; the colours made her mouth water. She never risked going inside one of those shops-she knew they'd chase her out-but no one could stop her looking.

Her own smock was the dun of pebbles-in order that the Patrons of the School would know the girls were humble and obedient, the Superintendent said. The same went for the caps and buttoned capes that had to be left at School with the books at the end of every day, so parents wouldn't pawn them. Once Mary tried to smuggle The Kings and Queens of England home for the night to Charing Cross Road, so she could read it under the covers by the streetlight that leaked into the basement, but she was caught going out the School door with the book under her arm and caned till red lines striped her palms. Not that this stopped her, it only made her more resourceful. The next time the teacher forgot to count the books at the end of the day, Mary tucked A Child's Book of Martyrs between her thighs and walked out with stiff small steps, as if in pain. She never brought that book back to school at all. Her favourite illustration was of the saint getting seared on a gigantic griddle.

As well as her daily dress Mary had a Sunday one-though the Digots only went to communion at St-Martin-in-the-Fields twice a year-but it had long since faded to beige. The bread the family lived on was gritty with the chalk the baker used to whiten it; the cheese was pallid and sweaty from being watered down. If the Digots had meat, the odd week when Mary's mother finished a big batch of quilting on time, it was the faint brown of sawdust.

Not that they were poor, exactly. Mary Saunders and her mother and the man she was meant to call Father had a pair of shoes each, and if baby Billy didn't learn to walk too fast, he would have a pair too, by the time he needed them. Poor was another state altogether, Mary knew. Poor was when bits of your bare body hung through holes in your clothes. Poor was a pinch of tea brewed over and over for weeks till it was the colour of water. Falling down in the street. That smell of metal on the breath of that boy at School who collapsed during Prayers. "Blessed are the meek," the Superintendent was intoning at the time, and she stopped for a moment, displeased at the interruption, then continued, "for they shall inherit the earth." But that boy hadn't inherited anything, Mary decided. All she'd done was fainted again the next morning, and never come back to School again.

Yes, Mary knew she had much to be thankful for, from the leather soles under her feet, to the bread in her mouth, to the fact that she went to School at all. Dull as it was, it was better than mopping floors in a tavern at eight years old, like the girl in the cellar beside theirs. There weren't many girls who were still at School when they turned thirteen; most parents would call it a waste of education. But it had been Cob Saunders' fondest whim that his daughter should learn what he never had-reading, writing and casting account-and as a matter of respect, his widow saw to that the girl never missed School. Yes, Mary ...

"Superb . . . A novel of real force, filled with unforgettable sights . . . A profoundly entertaining and intelligent book."--Elle

"This book rocks from the title on. A spectacular job."--USA Today

"What a great read this book is! Donoghue is a real writer, and she's elevated her racy story close to art."--The Washington Post Book World 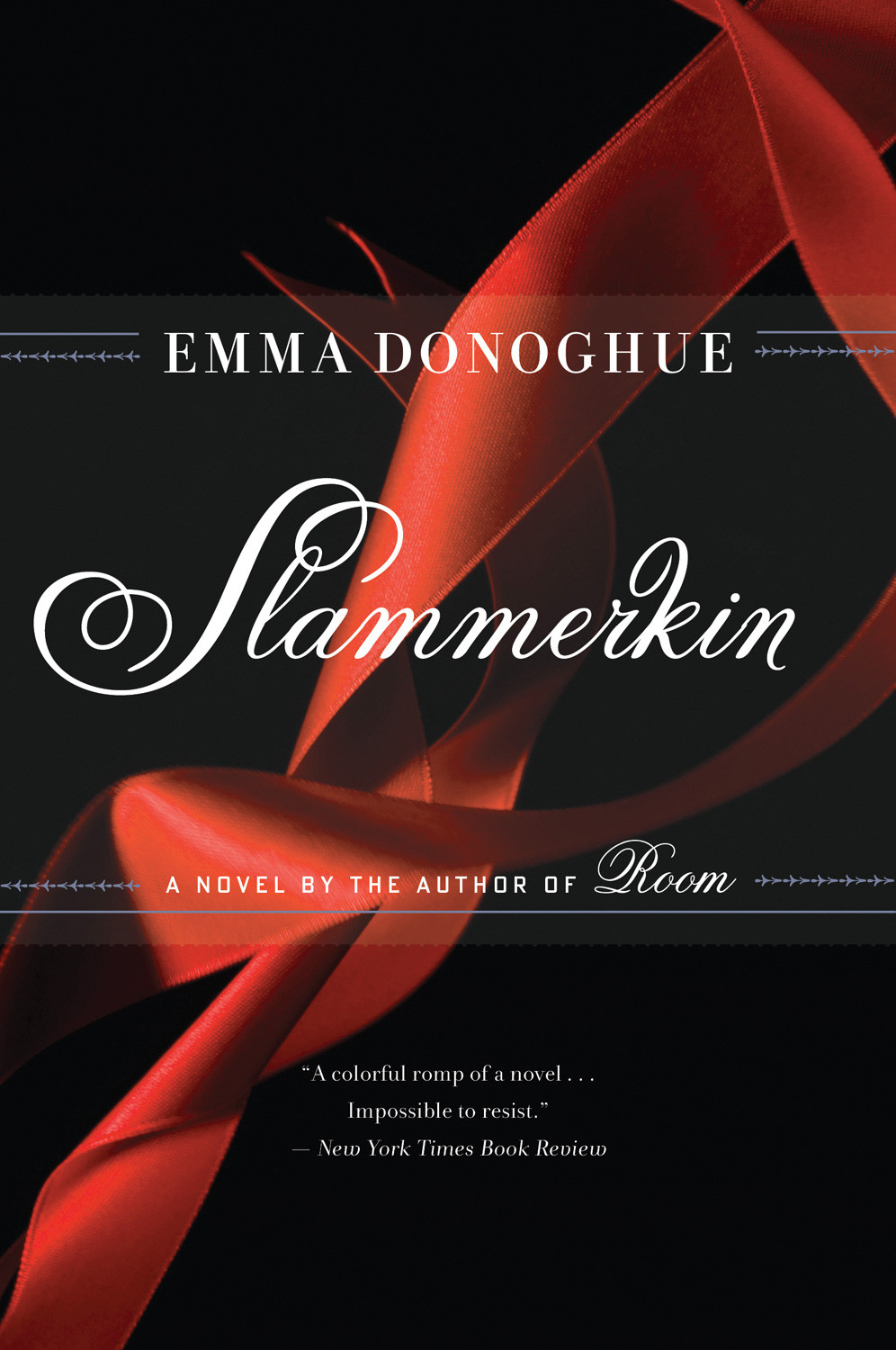