One of the landmark books of the twentieth century, the searing classic that launched the environmental movement.

One of the landmark books of the twentieth century, the searing classic that launched the environmental movement.

Rarely does a single book alter the course of history, but Rachel Carson’s Silent Spring did exactly that. The outcry that followed its publication in 1962 forced the banning of DDT and spurred revolutionary changes in the laws affecting our air, land, and water. Carson’s passionate concern for the future of our planet reverberated powerfully throughout the world.

The introduction by the acclaimed biographer Linda Lear tells the story of Carson’s courageous defense of her truths in the face of a ruthless assault form the chemical industry following the publication of Silent Spring and before her untimely death.

About the author
Rachel Carson

Rachel Carson (1907–1964) spent most of her professional life as a marine biologist with the U.S. Fish and Wildlife Service. By the late 1950s, she had written three lyrical, popular books about the sea, including the best-selling The Sea Around Us, and had become the most respected science writer in America. She completed Silent Spring against formidable personal odds, and with it shaped a powerful social movement that has altered the course of history.

Headlines in the New York Times in July 1962 captured the national sentiment: “Silent Spring is now noisy summer.” In the few months between the New Yorker’s serialization of Silent Spring in June and its publication in book form that September, Rachel Carson’s alarm touched off a national debate on the use of chemical pesticides, the responsibility of science, and the limits of technological progress. When Carson died barely eighteen months later in the spring of 1964, at the age of fifty-six, she had set in motion a course of events that would result in a ban on the domestic production of DDT and the creation of a grass-roots movement demanding protection of the environment through state and federal regulation. Carson’s writing initiated a transformation in the relationship between humans and the natural world and stirred an awakening of public environmental consciousness.

It is hard to remember the cultural climate that greeted Silent Spring and to understand the fury that was launched against its quietly determined author. Carson’s thesis that we were subjecting ourselves to slow poisoning by the misuse of chemical pesticides that polluted the environment may seem like common currency now, but in 1962 Silent Spring contained the kernel of social revolution. Carson wrote at a time of new affluence and intense social conformity. The cold war, with its climate of suspicion and intolerance, was at its zenith. The chemical industry, one of the chief beneficiaries of postwar technology, was also one of the chief authors of the nation’s prosperity. DDT enabled the conquest of insect pests in agriculture and of ancient insect-borne disease just as surely as the atomic bomb destroyed America’s military enemies and dramatically altered the balance of power between humans and nature. The public endowed chemists, at work in their starched white coats in remote laboratories, with almost divine wisdom. The results of their labors were gilded with the presumption of beneficence. In postwar America, science was god, and science was male.

Carson was an outsider who had never been part of the scientific establishment, first because she was a woman but also because her chosen field, biology, was held in low esteem in the nuclear age. Her career path was nontraditional; she had no academic affiliation, no institutional voice. She deliberately wrote for the public rather than for a narrow scientific audience. For anyone else, such independence would have been an enormous detriment. But by the time Silent Spring was published, Carson’s outsider status had become a distinct advantage. As the science establishment would discover, it was impossible to dismiss her.

Rachel Carson first discovered nature in the company of her mother, a devotee of the nature study movement. She wandered the banks of the Allegheny River in the pristine village of Springdale, Pennsylvania, just north of Pittsburgh, observing the wildlife and plants around her and particularly curious about the habits of birds.

Her childhood, though isolated by poverty and family turmoil, was not lonely. She loved to read and displayed an obvious talent for writing, publishing her first story in a children’s literary magazine at the age of ten. By the time she entered Pennsylvania College for Women (now Chatham College), she had read widely in the English Romantic tradition and had articulated a personal sense of mission, her “vision splendid.” A dynamic female zoology professor expanded her intellectual horizons by urging her to take the daring step of majoring in biology rather than English. In doing so, Carson discovered that science not only engaged her mind but gave her “something to write about.” She decided to pursue a career in science, aware that in the 1930s there were few opportunities for women.

Scholarships allowed her to study at Woods Hole Biological Laboratory, where she fell in love with the sea, and at Johns Hopkins University, where she was isolated, one of a handful of women in marine biology. She had no mentors and no money to continue in graduate school after completing an M.A. in zoology in 1932. Along the way she worked as a laboratory assistant in the school of public health, where she was lucky enough to receive some training in experimental genetics. As employment opportunities in science dwindled, she began writing articles about the natural history of Chesapeake Bay for the Baltimore Sun. Although these were years of financial and emotional struggle, Carson realized that she did not have to choose between science and writing, that she had the talent to do both.

From childhood on, Carson was interested in the long history of the earthh, in its patterns and rhythms, its ancient seas, its evolving life forms. She was an ecologist—fascinated by intersections and connections buttttt always aware of the whole—before that perspective was accorded scholarly legitimacy. A fossil shell she found while digging in the hills above the Allegheny as a little girl prompted questions about the creatures of the oceans that had once covered the area. At Johns Hopkins, an experiment with changes in the salinity of water in an eel tank prompted her to study the life cycle of those ancient fish that migrate from continental rivers to the Sargasso Sea. The desire to understand the sea from a nonhuman perspective led to her first book, Under the Sea-Wind, which featured a common sea bird, the sanderling, whose life cycle, driven by ancestral instincts, the rhythms of the tides, and the search for food, involves an arduous journey from Patagonia to the Arctic Circle. From the outset Carson acknowledged her “kinship with other forms of life” and always wrote to impress that relationship on her readers.

Carson was confronted with the problem of environmental pollution at a formative period in her life. During her adolescence the second wave of the industrial revolution was turning the Pittsburgh area into the iron and steel capital of the Western world. The little town of Springdale, sandwiched between two huge coal-.red electric plants, was transformed into a grimy wasteland, its air fouled by chemical emissions, its river polluted by industrial waste. Carson could not wait to escape. She observed that the captains of industry took no notice of the defilement of her hometown and no responsibility for it. The experience made her forever suspicious of promises of “better living through chemistry” and of claims that technology would create a progressively brighter future.

In 1936 Carson landed a job as a part-time writer of radio scripts on ocean life for the federal Bureau of Fisheries in Baltimore. By night she wrote freelance articles for the Sun describing the pollution of the oyster beds of the Chesapeake by industrial runoff; she urged changes in oyster seeding and dredging practices and political regulation of the effluents pouring into the bay. She signed her articles “R. L. Carson,” hoping that readers would assume that the writer was male and thus take her science seriously.

A year later Carson became a junior aquatic biologist for the Bureau of Fisheries, one of only two professional women there, and began a slow but steady advance through the ranks of the agency, which became the U.S. Fish and Wildlife Service in 1939. Her literary talents were quickly recognized, and she was assigned to edit other scientists’ field reports, a task she turned into an opportunity to broaden her scientific knowledge, deepen her connection with nature, and observe the making of science policy. By 1949 Carson was editor in chief of all the agency’s publications, writing her ow... 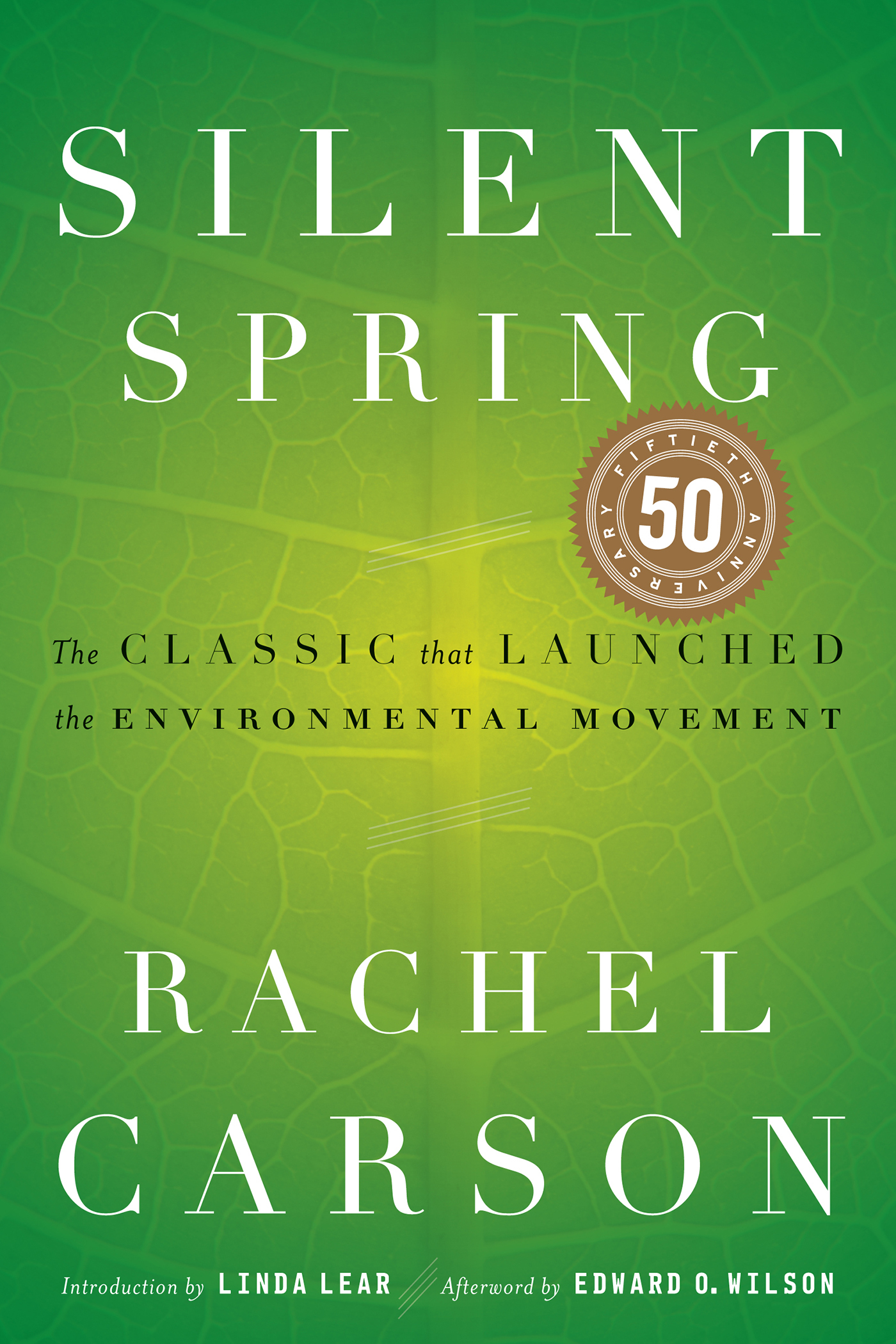