From the author of Blindness, an invaluable novel of dark humor that raises questions about the nature of democracy and the relationship between the government and the governed.

On election day in the capital, it is raining so hard that no one has bothered to come out to vote. The politicians are growing jittery. Should they reschedule the elections for another day? Around three o’clock, the rain finally stops. Promptly at four, voters rush to the polling stations, as if they had been ordered to appear.

But when the ballots are counted, more than 70 percent are blank. The citizens are rebellious. A state of emergency is declared. But are the authorities acting too precipitously? Or even blindly? The word evokes terrible memories of the plague of blindness that hit the city four years before, and of the one woman who kept her sight. Could she be behind the blank ballots? A police superintendent is put on the case.

What begins as a satire on governments and the sometimes dubious efficacy of the democratic system turns into something far more sinister.

terrible voting weather, remarked the presiding officer of polling station fourteen as he snapped shut his soaked umbrella and took off the raincoat that had proved of little use to him during the breathless forty-meter dash from the place where he had parked his car to the door through which, heart pounding, he had just appeared. I hope I’m not the last, he said to the secretary, who was standing slightly away from the door, safe from the sheets of rain which, caught by the wind, were drenching the floor. Your deputy hasn’t arrived yet, but we’ve still got plenty of time, said the secretary soothingly, With rain like this, it’ll be a feat in itself if we all manage to get here, said the presiding officer as they went into the room where the voting would take place. He greeted, first, the poll clerks who would act as scrutineers and then the party representatives and their deputies. He was careful to address exactly the same words to all of them, not allowing his face or tone of voice to betray any political and ideological leanings of his own. A presiding officer, even of an ordinary polling station like this, should, in all circumstances, be guided by the strictest sense of independence, he should, in short, always observe decorum.

As well as the general dampness, which made an already oppressive atmosphere still muggier, for the room had only two narrow windows that looked out onto a courtyard which was gloomy even on sunny days, there was a sense of unease which, to use the vernacu­lar expression, you could have cut with a knife. They should have postponed the elections, said the representative of the party in the middle, or the p.i.t.m., I mean, it’s been raining non-stop since yesterday, there are landslips and floods everywhere, the abstention rate this time around will go sky-high. The representative from the party on the right, or the p.o.t.r., nodded in agreement, but felt that his contribution to the conversation should be couched in the form of a cautious comment, Obviously, I wouldn’t want to underestimate the risk of that, but I do feel that our fellow citizens’ high sense of civic duty, which they have demonstrated before on so many occasions, is deserving of our every confidence, they are aware, indeed, acutely so, of the vital importance of these municipal elections for the future of the capital. Having each said their piece, the representative of the p.i.t.m. and the representative of the p.o.t.r. turned, with a half-sceptical, half-ironic air, to the representative of the party on the left, the p.o.t.l., curious to know what opinion he would come up with. At that precise moment, however, the presiding officer’s deputy burst into the room, dripping water everywhere, and, as one might expect, now that the cast of polling station officers was complete, the welcome he received was more than just cordial, it was positively enthusiastic. We therefore never heard the viewpoint of the representative of the p.o.t.l., although, on the basis of a few known antecedents, one can assume that he would, without fail, have taken a line of bright historical optimism, something like, The people who vote for my party are not the sort to let themselves be put off by a minor obstacle like this, they’re not the kind to stay at home just because of a few miserable drops of rain falling from the skies. It was not, however, a matter of a few miserable drops of rain, there were bucketfuls, jugfuls, whole niles, iguaçús and yangtses of the stuff, but faith, may it be eternally blessed, as well as removing mountains from the path of those who benefit from its influence, is capable of plunging into the most torrential of waters and emerging from them bone-dry.

With the table now complete, with each officer in his or her allotted place, the presiding officer signed the official edict and asked the secretary to affix it, as required by law, outside the building, but the secretary, demonstrating a degree of basic common sense, pointed out that the piece of paper would not last even one minute on the wall outside, in two ticks the ink would have run and in three the wind would have carried it off. Put it inside, then, out of the rain, the law doesn’t say what to do in these circumstances, the main thing is that the edict should be pinned up where it can be seen. He asked his colleagues if they were in agreement, and they all said they were, with the proviso on the part of the representative of the p.o.t.r. that this decision should be recorded in the minutes in case they were ever challenged on the matter. When the secretary returned from his damp mission, the presiding officer asked him what it was like out there, and he replied with a wry shrug, Just the same, rain, rain, rain, Any voters out there, Not a sign. The presiding officer stood up and invited the poll clerks and the three party representatives to follow him into the voting chamber, which was found to be free of anything that might sully the purity of the political choices to be made there during the day. This formality completed, they returned to their places to examine the electoral roll, which they found to be equally free of irregularities, lacunae or anything else of a suspicious nature. The solemn moment had arrived when the presiding officer uncovers and displays the ballot box to the voters so that they can certify that it is empty, and tomorrow, if necessary, bear witness to the fact that no criminal act has introduced into it, at dead of night, the false votes that would corrupt the free and sovereign political will of the people, and so that there would be no electoral shenanigans, as they’re so picturesquely known, and which, let us not forget, can be committed before, during or after the act, depending on the ­efficiency of the perpetrators and their accomplices and the opportunities available to them. The ballot box was empty, pure, ­immaculate, but there was not a single voter in the room to whom it could be shown. Perhaps one of them is lost out there, battling with the torrents, enduring the whipping winds, clutching to his bosom the document that proves he is a fully enfranchised citizen, but, judging by the look of the sky right now, he’ll be a long time coming, if, that is, he doesn’t end up simply going home and leaving the fate of the city to those with a black car to drop them off at the door and pick them up again once the person in the back seat has fulfilled his or her civic duty.

All rights reserved. No part of this publication may be reproduced

or transmitted in any form or by any means, electronic or mechanical,

including photocopy, recording, or any information storage and retrieval

system, without permission in writing from the publisher.

should be mailed to the following address: Permissions Department,

“A novel that says more about the days we are living in than any book I have read. [Saramago] writes with wit, heartbreaking dignity, and with the simplicity of a great artist in total control of his art.”—Ursula K. Le Guin

"I have never read a novel that gets so many details of the political behavior that we for some reason insist on calling 'organized' so hilariously and grimly right." — Chicago Tribune

The clarity and compassion of [Saramago's] vision make Seeing worthy of its name." —The Washington Post Book World

"Saramago understands that ridicule is a terrifically effective political weapon, and in Seeing he makes it his business to turn repression into farce...The 'blankers', as the stubborn nonvoters are called, are quiet and even docile, just the way a government ordinarily likes its citizens to be, but their refusal to pretend that the electoral process gives them a choice worth making is deeply subversive." —New York Times Book Review

"Saramago's unsettling allegory of power and politics . . . stays with you long after the last page is turned."— Cleveland Plain Dealer

"We live in age when democracy is being touted as the panacea to the world's ills — and not just abroad. 'Seeing' suggests a more complicated scenario. It offers that democracy is welcome in our times: that is, so long as it produces the results those in power want." — Denver Post

"The spirit of George Orwell rises from these blistering pages . . . another invaluable gift from a matchless writer." —Kirkus Reviews 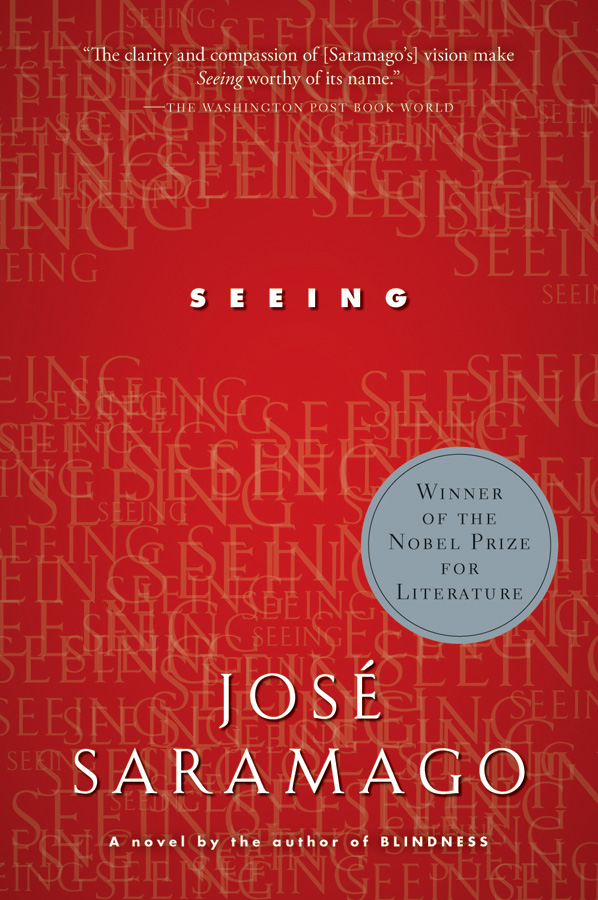