Twelve-year-old Colophon Letterford has a serious mystery on her hands. Will she discover the link between her family’s literary legacy and Shakespeare’s tomb before it’s too late? Antique paintings, secret passages, locked mausoleums, a four-hundred-year-old treasure, and a cast of quirky (and some ignoble) characters all add up to a fun original adventure. Readers will revel in a whirlwind journey through literary time and space in real-world locales from Mont St. Michel to Stratford-Upon-Avon to Central Park!

About the author
Deron R. Hicks

As a lawyer, Deron Hicks investigates mysteries for a living. He graduated from the University of Georgia with a degree in painting and from Mercer Law School. He lives in Warm Springs, Georgia with his wife and children. www.deronhicks.com Twitter: @DeronHicks Instagram: @drhicksmysteries  Facebook: DRHicksMysteries

Mark Edward Geyer is best known as the illustrator of two Stephen King novels: Rose Madder and The Green Mile. Mark has worked in a variety of illustration genres, including corporate advertising, editorial, and architectural. He comes from a long line of artists. Visit his website at www.markedwardgeyer.com.

Wind, rain, and waves have pounded the rocky coast of Normandy for thousands of years. The forces of nature slowly eroded the vast coastal plains to form a large bay and, in the middle of that bay—apparently oblivious to the onslaught of nature—remained an impossibly large granite rock. According to legend, the archangel Michael appeared to the bishop of Avranches in A.D. 708 and demanded the construction of a church on that rock. The bishop, who apparently had other items on his agenda, ignored the archangel’s demands. The archangel, however, would not be deterred. With a touch of his finger, the archangel burned a hole in the bishop’s skull.

The bishop got the message.

The church was built.

To honor the legend of Archangel Michael, the rock has been known for centuries as Saint Michael’s Mountain—or more commonly, le Mont Saint-Michel. At the highest peak of le Mont Saint-Michel stands the abbey church, hewn from the native granite and surrounded by beautiful gardens maintained by the Benedictine monks who have lived in the adjacent cloister for centuries. A narrow stone road winds its way up the rock, and through a small village that sits below the church. The church, the cloister, and the village are surrounded by a fortified wall—a testament to the rock’s history as a token of war. However, it is the raging tides of the bay that surround and truly protect le Mont Saint-Michel. The tides are not timid—they are said to be the swiftest and deepest in Europe. Many a man has lost his life for failing to pay due respect to the charging waters.

Over the centuries le Mont Saint-Michel had served as a fortress, a prison, and a sanctuary. On this particular evening, however, Miles Letterford hoped that it would offer both a brief respite from his long trek and the answer to his quest. He had set out from England five days prior, but the weather had not been cooperative. On many occasions he had been sorely tempted to turn back from this arduous and unusual journey. Just a week ago he had been sitting by the bed of his dying friend. His friend had placed a ring in the palm of his hand and asked him to swear an oath—an oath to recover and keep safe that which his friend treasured most. Miles now silently cursed his rashness in agreeing to such an undertaking.

The relentless weather of the Norman coast had left him cold, wet, and exhausted as he arrived at the edge of the bay at dusk. In front of him was le Mont Saint-Michel. The massive rock — its village lights flickering in the distance—seemed to float on the low fog that covered the bay. Miles could see the silhouette of the abbey church at the top of le Mont.

His arrival coincided with low tide, and he knew that the sea had retreated far beyond the imposing rock. This was not, as he had been warned, a guarantee of safe passage, and the fading light and fog made the situation particularly dangerous—the bay was not a place to dally. Miles spurred his horse on toward the glittering lights of le Mont.

The ride across the bay took far longer than Miles had anticipated. The lights—so clear from the far shore—were rendered almost nonexistent by the thick fog that now enveloped him and his horse. Miles wondered more than once whether he had rambled off course—whether he would eventually run into the teeth of the returning tide. He was therefore greatly relieved when the light from a lamp outside the village gates finally burned its way through the thick haze and offered him a guidepost.

Once inside the village gates, Miles found a public stable where, for a small fee, his weary horse was permitted some hay and shelter from the weather. Although his body ached and his stomach protested, he knew that he would have to wait for his food and rest.

The rain had now passed and night had come; the sky opened to reveal a full moon. Miles walked quickly through the empty, moonlit streets of the village, up a steep set of stone stairs, and onto a landing at the top of le Mont. The imposing stone facade of the abbey church now towered above him, its spire reaching far into the night sky.

Miles looked around the landing.

He opened the heavy wooden door of the church and slipped quietly inside.

He stood inside the entrance and stared down the nave. The church was dimly lit—four small lanterns offered only the merest hint of the space within. Looking upward offered nothing more—whatever moonlight illuminated le Mont could not penetrate windows darkened by centuries of candle soot. He could not see the ceiling—just darkness. The shadows in the side aisles hung like curtains. Everything was black and gray.

Miles stepped into the shadows of the side aisle and listened intently.

The monks who inhabited the abbey followed a rigid schedule—a schedule that called for them to be in their rooms for evening prayers for at least the next hour. The church itself was used only for mass in the morning and vespers in the evening. Otherwise it remained empty, except for the occasional pilgrim and cleaning—neither of which would be expected at this time of night.

Satisfied that he was alone, Miles walked down the nave to the center of the church—the crossing—and turned right down a short passage. At the end of the passage, several small prayer candles burned on a wooden pedestal. Above him towered a large wooden sculpture of Archangel Michael, standing triumphantly with his right arm raised high above his head, a flaming sword in his hand, and under his left foot, the decapitated head of a dragon.

Miles pulled out his dagger, paused, and listened once again.

He placed his left hand on the top edge of the pedestal and felt along its edge. Almost two-thirds down the edge, he found what he was looking for—a small, almost imperceptible notch. He placed the tip of his dagger in the notch and pulled.

The sound reverberated through the church. The front of the pedestal separated slightly from the rest of the base.

Miles listened for any sounds.

Miles set the dagger in the crack in the pedestal and pulled again.

The wood groaned and then . . . CRACK. The front of the pedestal separated a full hand’s width from the base.

Miles paused and listened once again.

He grabbed the front of the pedestal, took a deep breath, and pulled.

Miles examined the box. It was constructed of dark, almost black wood, edged at its corners with inlaid brass. Carved into the top of the box was a falcon holding a spear with the words non sanz droict inscribed beneath. On the front of the box was a large brass oval inscribed with the symbol for the Greek letter sigma—∑.

Miles ran his hand over the carving on the top of the box. It was exactly as described...

"Superbly written, plenty of action, a bright and inquisitive 12-year-old girl protagonist, and lots of literary flair, this book can be recommended to pretty much any kid in the 8-13 range."

"The combination of humor and suspense works well to keep readers turning the pages of this modern-day mystery."

"Hicks establishes an aura of old-fashioned mystery in his entertaining debut."

"A fine traditional mystery with a modern sensibility." 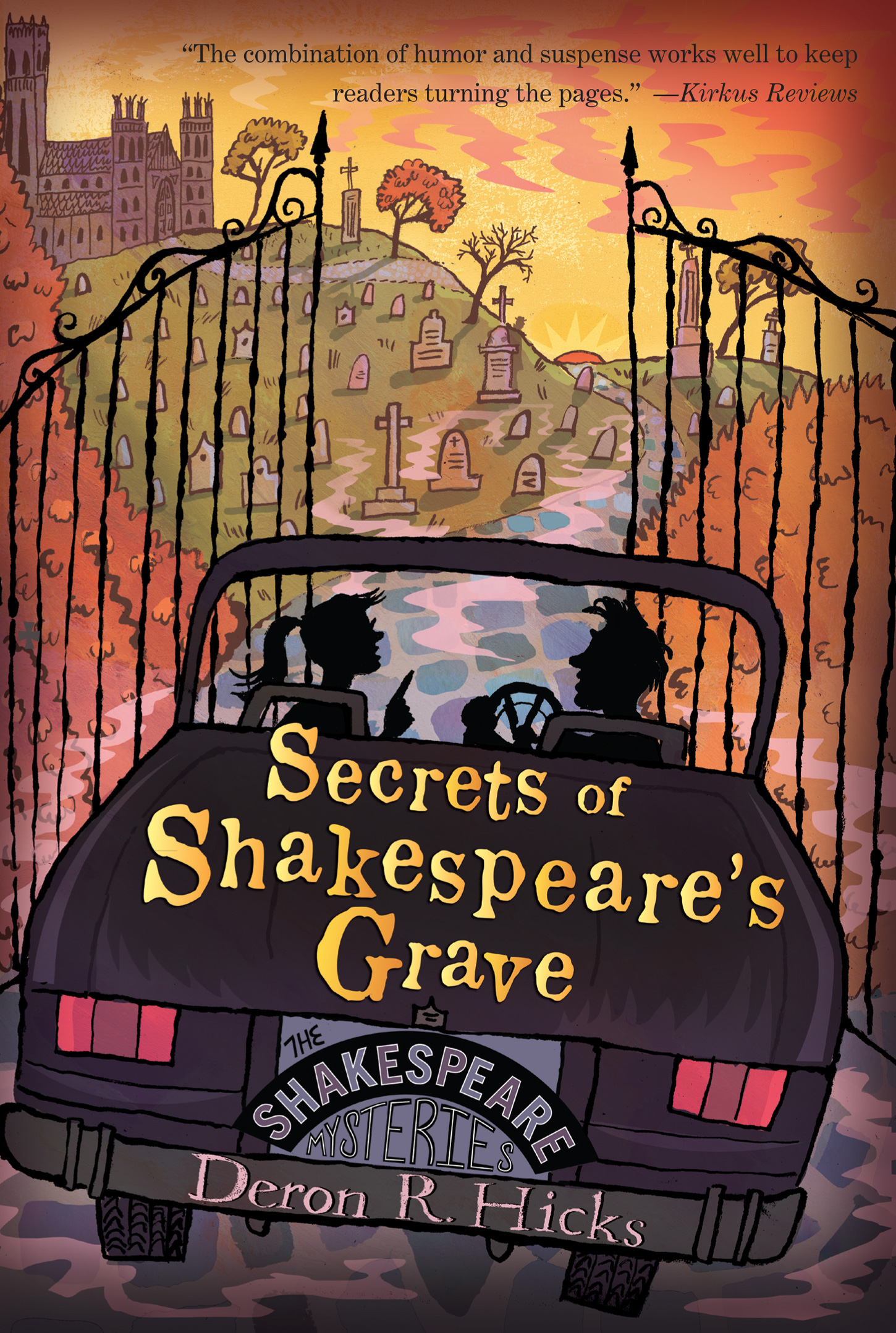