In an astounding turn of events, the Shluffmuffins twins' long-lost father has reappeared years after his tragic Porta Potti accident. Wally and Cheyenne, of course, are thrilled to see their dear old dad again. But would it be rude to point out how his skin appears to be rotting and falling off in chunks? Or that his breath smells distinctly like bloated roadkill? Come to think of it, he looks an awful lot like . . . well, a zombie. So imagine the twins' delight when they discover that their friend Professor Spydelle has developed a special life-restoring elixir, the only known cure for zombiism.

Hmmmm. Unfortunately, it seems there are still some kinks to work out on that special Elixir of Life. It cures Dad of his zombiism, only to turn him into . . . a vampire.

It would seem that things couldn't get much worse. But when two faces that look suspiciously like giant ants appear in Wally and Cheyenne's bedroom window one night, things take a turn from dismal . . . to dire.

About the author
Dan Greenburg

DAN GREENBURG is the creator of the enormously popular Zack Files series of middle grade novels as well as the author of a number of bestselling adult books, the best-known of which is How to Be a Jewish Mother. He lives in New York.

SCOTT M. FISCHER has illustrated many book jackets and has also created art for Magic: The Gathering and Dungeons & Dragons. He lives in upstate New York. &lt;br&gt;www.fischart.com

Can Dad Come Inside and ­Play?

“‘Zombie Cures,’” said Wally excitedly, reading over her shoulder. His excitement faded as he read the next sentence: “‘There are at present no known cures for zombiism.’ ­Darn!”

When the zombie outside Professor Spydelle’s house in Dripping Fang Forest had turned out to be their father, Wally and Cheyenne Shluffmuffin were pretty surprised. Dad had drowned in a Porta Potti accident at the Cincinnati circus three years before, so they assumed he was dead. Now here he was again. But since he was a zombie, he was still technically dead. The encyclopedia said there were no cures for zombiism, so Wally and Cheyenne didn’t know what else they could do for ­him.

Wally was ready to give up, but Cheyenne wasn’t ­discouraged.

“Ah, there you are, children,” he said in his dignified British accent. “Did you bring in more ­firewood?”

“Not yet,” said Wally. “Professor Spydelle, we need to ask you a favor. A big ­one.”

“Why, certainly, Wally,” said the professor. “What is it?” He sank into one of the net hammocks that stretched across the Spydelle living room. His joints creaked as he settled ­down.

“Somebody we know sort of well is outside,” said Wally. “He looks kind of gross, but if you don’t mind, we’d like to bring him ­inside.”

“Who is this person?” asked the professor with a kindly ­smile.

“Your father?” He frowned. “I don’t understand. I thought you children were ­orphans.”

“Great heavens!” cried the professor, hopping out of his hammock. “Let me help you with the ­body.”

“Oh, you don’t need to,” said Cheyenne. “Dad isn’t exactly a body yet. He’s just kind of staggering around out there. He seems to have become a ­zombie.”

“A zombie? My word! How fascinating! Let’s go out and have a look at ­him.”

Professor Spydelle followed the Shluffmuffin twins outside. Zombie Dad stood in the front yard, muttering to himself. Hanging from his body were pieces of rotting skin. You could smell him from clear across the yard, the sickly sweet odor of bloated roadkill before it ­explodes.

The professor was as thrilled as a kid with a new ­puppy.

“It is a zombie!” cried the professor. “This is extraordinary! I mean, of course, I’m so terribly sorry for your tragic loss and all that, but, um, this is absolutely ­extraordinary!”

“Can you make out what he’s saying?” asked the ­professor.

“Sure,” said Wally. “Three years ago he fell into a Porta Potti at the circus and ­drowned.”

“Remarkable!” said the professor. “You know, children, besides voodoo curses, the only other way to become a zombie is drowning in a Porta ­Potti.”

“Awesome,” said Wally. “Hey, you wouldn’t happen to know of a cure for zombiism, would ­you?”

“Know of one?” Professor Spydelle chuckled. “My dear boy, I invented ­one.”

“Shy, Wa, me Da,” muttered the zombie. He broke off a rib and used it to scratch an itch between his shoulder ­blades.

“What do you mean you invented one, ­Professor?”

“Years ago,” said the professor, “I spent a great deal of time and money developing a special life­-­restoring elixir. My first efforts were a disaster, but eventually I found a way to make it work. I was able to bring back to life one of the museum’s deadest animals, which had been found frozen in a glacier—a saber­-­toothed tiger. It had been dead, oh, at least fourteen thousand years, but my Elixir of Life made it live ­again.” 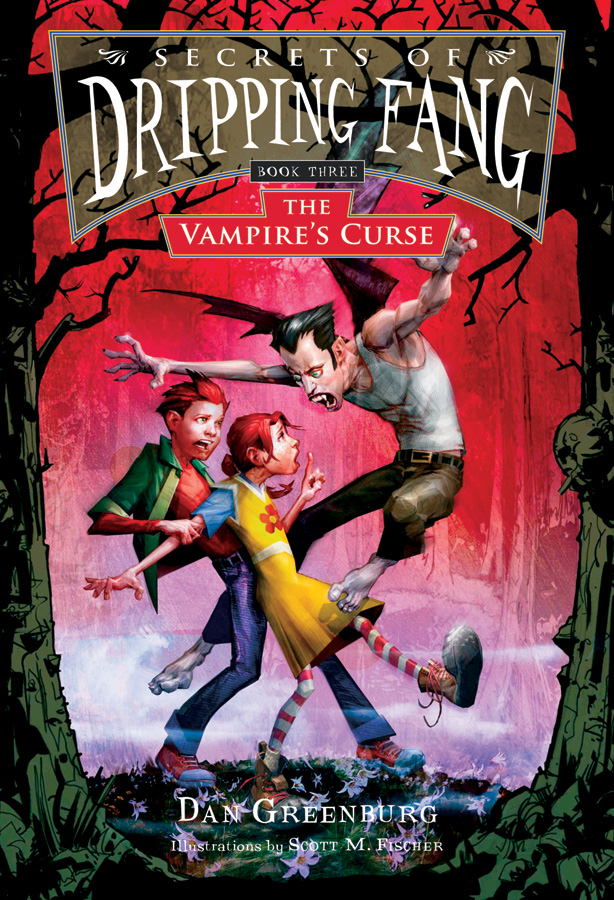