Cimorene, the princess who refueses to be proper, is back--but wher Kazul the dragon? That's what Cimorene is determined to find out! This updated edition features a new introduction by the author and fantastic new packaging.

This time the wicked wizards are draining power from the Enchanted Forest. “This riotous sequel to Dealing with Dragons evinces the same wacky wit and skewed fairy-tale elements with the addition of a touch of romance. Once again, Wrede offers a story that will delight fantasy fans, particularly those who have relished Cimorene’s adventures in the first book of the Enchanted Forest Chronicles.”--Booklist

About the author
Patricia C. Wrede

PATRICIA C. WREDE has written many novels, including Sorcery and Cecelia or The Enchanted Chocolate Pot and The Grand Tour coauthored with Caroline Stevermer, as well as the four books in her own series, the Enchanted Forest Chronicles. She lives near Minneapolis, Minnesota.

The King of the Enchanted Forest was twenty years old and lived in a rambling, scrambling, mixed-up castle somewhere near the center of his domain. He sometimes wished he could say that it was exactly at the center, but this was impossible because the edges and borders and even the geography of the Enchanted Forest tended to change frequently and without warning. When you are the ruler of a magical kingdom, however, you must expect some small inconveniences, and the King tried not to worry too much about the location of his castle.

The castle itself was an enormous building with a wide, square moat, six mismatched towers, four balconies, and far too many staircases. One of the previous Kings of the Enchanted Forest had been very fond of sweeping up and down staircases in a long velvet robe and his best crown, so he had added stairs wherever he thought there was room. Some of the steps wound up one side of a tower and down the other without actually going anywhere, which caused no end of confusion among visitors.

The inside of the castle was worse than the outside. There were corridors that looped and curled and twisted, rooms that led into other rooms, and even rooms that had been built inside of other rooms. There were secret passageways and sliding panels and trapdoors. There were several cellars, a basement, and two dungeons, one of which could only be reached from the sixth floor of the North-Northwest Tower.

“There is something backwards about climbing up six flights of stairs in order to get to a dungeon,” the King of the Enchanted Forest said, not for the first time, to his steward.

The steward, a small, elderly elf named Willin, looked up from a handwritten list nearly as long as he was tall and scowled. “That is not the point, Your Majesty.”

The two were in the castle study, going over the day’s tasks. Willin stood in the center of the room, ignoring several chairs of assorted sizes, while the King sat behind a huge, much-battered oak desk, his long legs stretched out comfortably beneath it. He was not wearing a crown or even a circlet, his clothes were as plain as a gardener’s, and his black hair was rumpled and needed trimming, but somehow he still managed to look like a king. Perhaps it was the thoughtful expression in his gray eyes.

Willin cleared his throat and went on, “As the center of Your Majesty’s kingdom, this castle—”

“It’s not at the center of the kingdom,” the King said, irritated. “It’s only close. And please just call me Mendanbar and save all that ‘Your Majesty’ nonsense for a formal occasion.”

“We don’t have formal occasions anymore,” Willin complained. “Your Majesty has canceled all of them—the Annual Arboreal Party, the Banquet for Lost Princes, the Birthday Ball, the Celebration of Colors, the Christening Commemoration, the—”

“I know,” Mendanbar interrupted. “And I’m sure you have them all written down neatly somewhere, so you don’t have to recite them all. But we really didn’t need so many dinners and audiences and things.”

“And now we don’t have any,” Willin said, unmollified. “And all because you said formal occasions were stuffy.”

“They are stuffy,” King Mendanbar replied. “Stuffy and boring. And so is being ‘Your Majestied’ every third word, especially when there’s only the two of us here. It sounds silly.”

“In your father’s day, everyone was required to show proper respect.”

“Father was a stuffed shirt and you know it,” Mendanbar said without bitterness. “If he hadn’t drowned in the Lake of Weeping Dreamers three years ago, you’d be grumbling as much about him as you do about me.”

Willin scowled reprovingly at the King. “Your father was an excellent King of the Enchanted Forest.”

“I never said he wasn’t. But no matter how good a king he was, you can’t deny that he was a stuffed shirt, too.”

“If I may return to the topic of discussion, Your Majesty?” the elf said stiffly.

The King rolled his eyes. “Can I stop you?”

“Your Majesty has only to dismiss me.”

“Yes, and if I do you’ll sulk for days. Oh, go on. What about the North-Northwest dungeon?”

“It has come to my attention that it is not properly equipped. When it was first built, by Your Majesty’s great-great-great-great-grandfather, it was naturally stocked with appropriate equipment.” Willin set his list of things to do on Mendanbar’s desk. He drew a second scroll from inside his vest and began to read. “Two leather whips, one Iron Maiden, four sets of thumbscrews—”

“I’ll take your word for it, Willin,” the King said hastily. When Willin got going, he could read lists for hours on end. “What’s the point?”

“Most of these items are still in the dungeon,” Willin said, rerolling the scroll and stowing it inside his vest once more, “but the rack was removed in your great-great-grandfather’s time and has never been replaced.”

“Really?” King Mendanbar said, interested in spite of himself. “Why did he take it out?”

The little steward coughed. “I believe your great-great-grandmother wanted it to dry tablecloths on.”

“Tablecloths?” Mendanbar looked out the window at the North-Northwest Tower and shook his head. “She made someone haul a rack up eight flights of stairs and down six more, just to dry tablecloths?”

“A very determined woman, your great-great-grandmother,” Willin said. “In any case, the dungeon is in need of a new rack.”

“And it can stay that way,” said Mendanbar. “Why should we get another rack? We’ve never used the one we have.” He hesitated, frowning. “At least, I don’t think we’ve ever used it. Have we?”

“That is not the point, Your Majesty,” Willin answered in a huffy tone, from which the King concluded that they hadn’t. “It is my duty to see that the castle is suitably furnished, from the topmost tower to the deepest dungeon. And the dungeon—”

The elf consulted his list. “The nightshades are becoming a problem in the northeast.”

“Nightshades are always a problem. Is that all?”

“Ah . . .” Willin cleared his throat, then cleared it again. “There is the matter of Your Majesty’s marriage.”

“This riotous sequel to Dealing with Dragons evinces the same wacky wit and skewed fairy-tale elements with the addition of a touch of romance. Once again, Wrede offers a story that will delight fantasy fans.”--Booklist

"Another winning chapter in a delightful tale."--School Library Journal

An ALA Notable Children's Book

An NYPL Book for the Teen Age 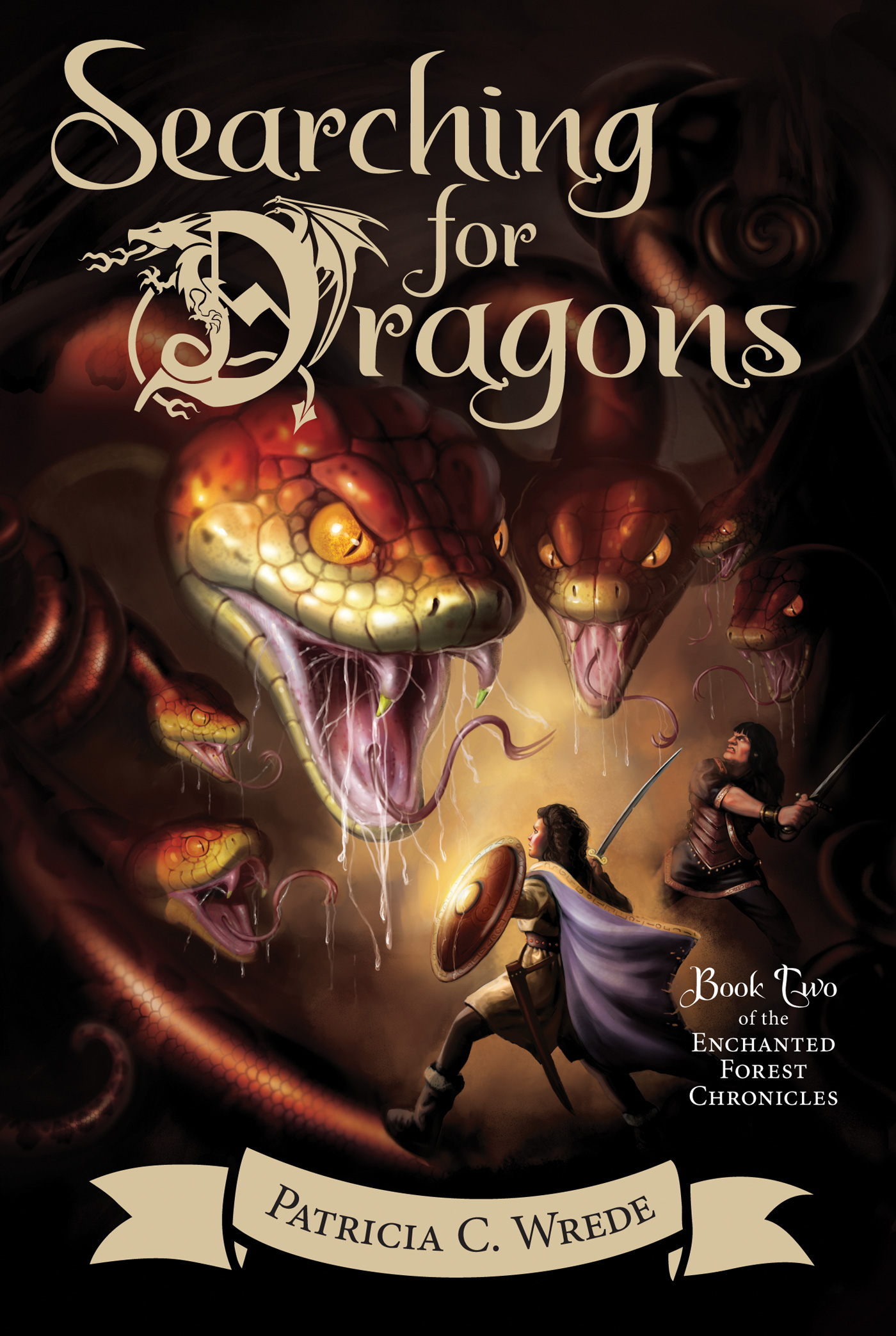