In the second high-stakes installment in this morbidly funny series about a teenage grim reaper, Lex tries to track down a renegade grim who is indiscriminately damning souls. But how can Lex be a hero when the so many of her fellow Grims have turned against her for her own misdeeds?

Sixteen-year-old Lex Bartleby is a teenage grim reaper with the bizarre ability to Damn souls. That makes her pretty scary, even to fellow Grims. But after inadvertently transferring her ability to Zara, a murderous outlaw, Lex is a pariah in Croak, the little town she calls home. To escape the townspeople’s wrath, she and her friends embark on a wild road trip to DeMyse. Though this sparkling desert oasis is full of luxuries and amusements, it feels like a prison to Lex. Her best chance at escape would be to stop Zara once and for all—but how can she do that from DeMyse, where the Grims seem mysteriously oblivious to Zara’s killing spree?

Carl Scutner wondered, for a brief moment, what it would feel like to punt his wife off a cliff.

"Would you shut up in there?" he yelled from the sofa. Between the noisy construction crew down the street, the whimpers coming from the dog cage that sat in the corner, and the pots and pans his wife was banging around in the kitchen, the baseball game on television had become nearly inaudible. "Jesus Christ, I can’t hear myself think!"

Lydia appeared at the kitchen doorway. "Like there’s anything worth hearing in that so-called brain of yours."

"Here." She handed him a fresh beer and sat on the edge of a hideous orange chair, its matted fabric dingy and stained. "Cubs losing?"

Lydia looked down. Crumpled fast food wrappers littered the floor. A glob of ketchup had leaked onto the carpet. As the construction noises down the street grew louder, so too did the whimpers from the cage. She glanced at the telephone, then couldn’t stop staring at it. Her breaths became shallow.

He took a drag from his cigarette. "They’ll call."

"You always say that. You’re not always right."

"They better," she said, wringing her hands. "I don’t want to do that again."

Lydia picked through her mousy hair with a trembling hand. She shot a resentful glance at her husband and his ever-expanding beer gut, then sniffed the air. "It smells like shit in here."

Lydia looked at the dog cage, into the big brown eyes staring back at her. "Maybe we should let him out for a little while."

"Are you kidding me? The last one got halfway down the driveway before I caught him." He took a swig of beer. "You’re getting sloppy."

"I’m just—" She stopped and looked around. "Did you hear that?"

She listened. "I thought maybe—the back door—"

"Alarm system’s on." He stubbed out his cigarette on the arm of the sofa. "Would you knock it off? You should be used to this by now."

Unnerved, Lydia grabbed his empty beer bottle and walked into the kitchen. "At least let me feed the poor thing."

Carl gestured at the bowl of kibble on the floor. "He’s fine. Too fat as he is, if you ask me."

The construction crew grew louder, so Carl grabbed the remote and turned up the volume as high as it could go. This just so happened to coincide with a home run, which prompted Carl to let loose with a torrent of obscenities.

And so, as the living room erupted into a sustained cacophony, Carl never heard the bottle shatter on the kitchen floor. He never heard his wife’s tortured screams. And he certainly never heard the intruder enter the living room; in fact, he didn’t even realize she was there until she was right in front of him, her eyes peeking out from beneath a black hood, her nose almost touching his.

"I’m sorry you had to see that," she said a few moments later, opening the door to the dog cage. "Are you okay?"

The little boy inside nodded his head, his eyes blurred with tears. She took his hand and led him across the living room, careful not to let him get too close to the scorching remains of his captors.

"I have to go now," she said, grabbing a phone and dialing 911. "But I need you to be brave and do one thing for me." She handed him the phone. "Just tell them who you are and that you’re at fifty-one Forest Drive. Then go sit out on the front steps. Can you do that?"

He wiped his nose and nodded.

"Good boy. And don’t tell anyone I was here." She smiled and raised something that looked like a knife. "It’ll be our little secret."

The news reports that aired later that night were confusing, to say the least. A married couple by the name of Carl and Lydia Scutner were found dead in their home, victims of an apparent murder-suicide. All evidence pointed to the fact that they were the suspects the police had been hunting for a while now, the monsters responsible for kidnapping and holding for ransom at least a dozen children from the suburbs of Chicago over the past six months. Small, fresh mounds of dirt in the backyard indicated that a few of those children had never been returned.

No cameras were allowed inside the house. Too gruesome, the police said.

The little boy was clearly still in shock. The descriptions he gave of what had happened—the Scutners bursting into flames almost instantly, without burning a single other item in the house, only to self-extinguish a few minutes later—were too ridiculous to be taken seriously. The police smiled politely at his tales and ruffled his hair, while his parents were so overcome with relief that they barely listened to a word he said. And the media, clearly of the opinion that children should be seen and not heard, were perfectly content to snap photo after photo of the adorable tear-stained lad, yanking the microphone out of his face the moment he started to embarrass them with talk of spontaneous magical fires.

No one listened to him. And it was about that time that the child realized why the girl had told him to remain silent: because no one would have believed him anyway.

And so he kept the little secret.

"Looks like Zara’s at it again," the old bat’s voice crackled.

Lex ignored this jolly piece of news and stared out the car window at the blurring foliage of the Adirondacks. The leaves were just beginning to change — a few splotches of yellow, a speckle or two of red. Though a chill had settled in the air, she had opened her window far wider than just a crack, and neither the loud gusts of wind nor the occasional chattering of teeth issuing forth from the passengers stuffed into the tiny back seat had prompted her to close it.

"Keep it down, Pandora," Lex’s uncle replied into his Cuff, the staticky, ether-infused communications device around his wrist. "I’ve got rookies in the car. Don’t freak them out any sooner than we have to."

"But this is getting ridiculous!" the voice rasped back through the Cuff. "First those mail bombers in Houston, then that rapist in Nebraska. Now kidnappers in Chicago! Ever since that little snake found herself a new scythe, she’s been going hog-wild!" There was a pause. "I guess we should count our lucky stars she hasn’t come after us."

"Count our lucky stars? She found a scythe, Dora. Which means she also found an ally."

"Which means," Pandora added, "that once again, we’re screwed eight ways from Sunday."

"An amusing blend of whimsy and humor with serious drama and blood."

"Characters are always as clever as we wish we were. . . . An irresistible blend of impending doom, irreverent humor, hormone-fueled make-out sessions, and creative world-building make this sequel stronger than its predecessor and will leave readers dying for the next book."

"Go ahead and die laughing, knowing that the safe transport of your mortal soul will be the summer job of a sweetheart teen with godlike power and discipline problems. A lot of books make me wish I could live within their pages, but I wouldn't mind dying in this one."

"A gut-wrenching, laugh-out-loud, gritty, honest and brave ending to an appealing trilogy." 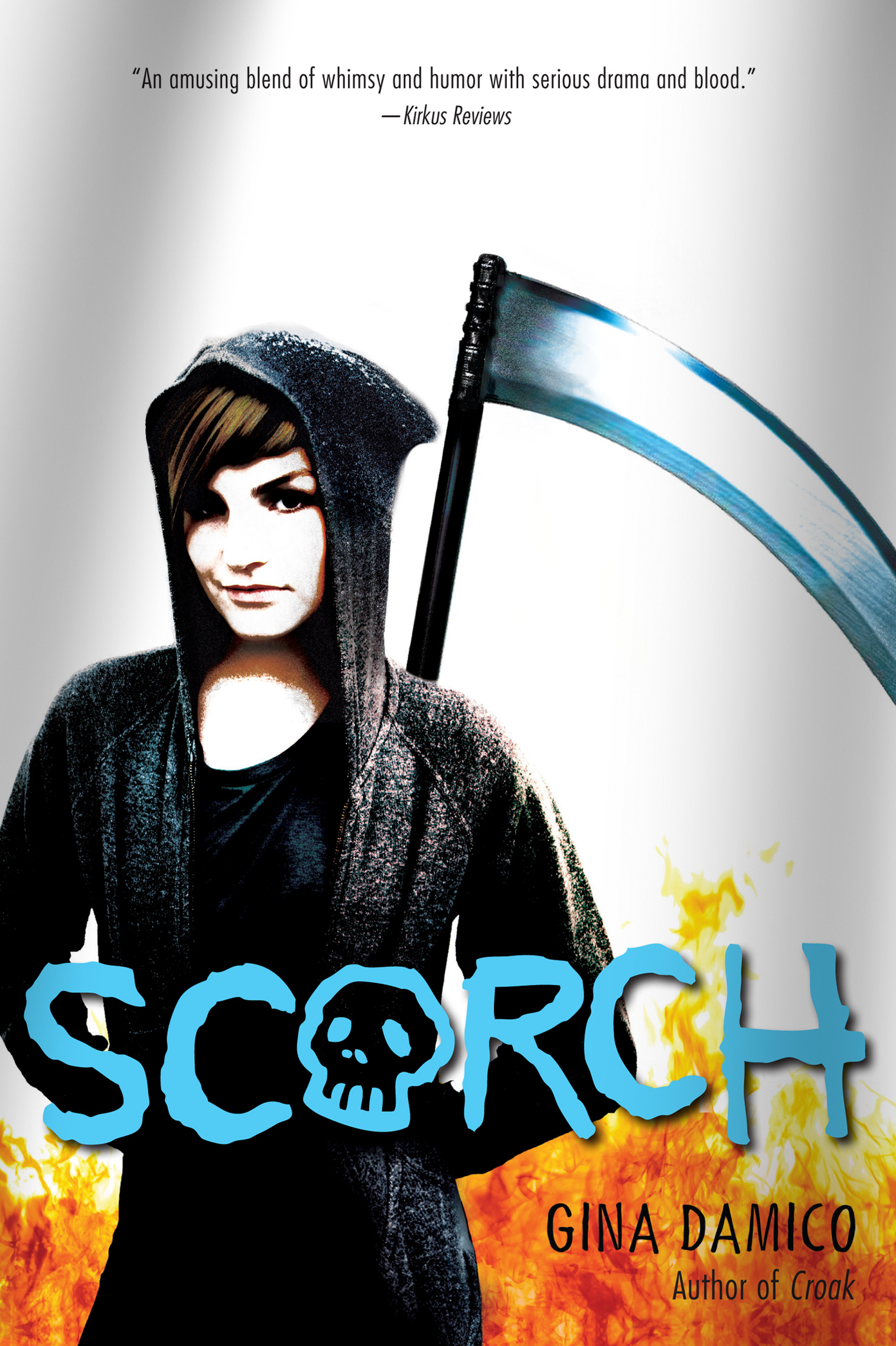