School of Dreams: Making the Grade at a Top American High School

The pressure to succeed in our nation's most competitive public high schools is often crushing. Striving to understand this insular world, Pulitzer Prize-winning journalist Edward Humes spent a year at California's Whitney High, a school so renowned that parents move across town-and across the world-hoping to enroll their children. That's because schools like Whitney deliver everything parents want: love of learning, a sense of mission, and SAT scores that pave the way to elite universities. Attending such a school, of course, carries its own toll: High-achieving, pressured kids survive on espresso and four hours' sleep a night, falling into despair if they get a B.

About the author
Edward Humes

Edward Humes is a veteran journalist, contributing to the Los Angeles Times Sunday Magazine, and has written numerous books including Baby E. R. and the bestselling Mississippi Mud, Mean Justice, and No Matter How Loud I Shout. A graduate of Hampshire College and a Pulitzer Prize winner, he lives in Southern California with his family.

"We have great kids here, wonderful students. The best. I love teaching here." The drama teacher hurls the obligatory praise over her shoulder like a trail of bread crumbs as she leads the fresh arrivals on a quick tour of their new school. Then she gets to the inevitable but, her voice a stage whisper now, forcing the six new teachers hurrying after her to crane forward. "But there are two things you really, really have to remember about this place...."

Jodi Improta heads Whitney High School's drama department with good reason: She knows how to set up a line. "First, these kids are messy," she tells them. She bobs her blond head at a Coke bottle and some crumpled papers scattered on the ground outside the library, courtesy of the kids who stopped by earlier for textbook pickup. "They never pick up their trash. Unless you ride them."

The new teachers chuckle and relax a bit. Their tour guide's conspirational tone had left them worried there for a minute. But litterbugs? Even the greenest educator can handle that. Improta picks up the refuse, pitches it into a trash can, then pushes through a set of double doors into the old square warehouse of a school building. She pauses in her brisk stroll just long enough to introduce a barrage of passing faculty members in the hallway and to point out the alcove holding the all-important staff copy machines and laminator. The newbies nod blankly, trying to absorb it all. Improta has them lulled now. No one sees the punch line coming.

"Now, here's the second thing you gotta remember," she resumes cheerfully. "Some of our kids cheat. Big time."

Six heads snap to attention at this, a frieze of knitted brows and pursed lips. One of the new teachers laughs nervously. Trash on the asphalt is one thing, but this bald statement about cheating brings them up short.

This is, after all, Gretchen Whitney High School she's talking about, the top-ranked public high school in California, one of the best (and best-kept secrets) in the nation-prep-school quality at public-school prices. In an era when public education is derided daily by pundits and presidents as hopelessly broken, blamed for every social ill from a dearth of youthful patriotism to an abundance of youthful pregnancies, Whitney High is an unabashed success. It is a public school that works, without any special funding, charters, vouchers, union concessions, or private enterprise takeovers-none of the most-touted cures for what supposedly ails public education. There are no uniforms, no scripted lesson plans, no zero-tolerance policies. As such, Whitney is no one's political cause or poster child, and if its principal is treated like a celebrity abroad, he stands anonymous in the checkout line at the local supermarket; his school is not only off the national radar screen, it is a virtual unknown in its own state and even in neighboring Los Angeles, where other schools get all the press. Yet test scores at Whitney rival those at the nation's most elite private and public academies,1 the best colleges in the country court and woo the seniors like starstruck autograph seekers, few years go by without someone (or two or three) scoring a perfect SAT. People don't just move from other cities to this geographically unfashionable L.A. suburb so they can send their kids to Whitney. They move from other countries to attend an American public high school. And come graduation night, Whitney doesn't have just one or two valedictorians. Most years a dozen or more 4.0s line up to shake the Whitney principal's hand.

"Don't be so surprised," the drama teacher cautions. "Our kids are so smart, they find ways to get around the rules. Ways you've never imagined." She goes on to describe an elaborate method several students worked out for beaming test answers to one another's PalmPilots.

It is almost too much to bear. First the six new teachers had to weather that interminable high school ritual, the welcome-back faculty meeting, with its meandering agenda, weak coffee, and insider references only initiates could follow. Later they were introduced to their classrooms, some to be shared with veteran teachers (who had already staked out most of the drawers, shelves, and prime wall space), others in varying states of cleanliness and repair (one new science teacher had to excavate a quarter century's accumulation of old papers; a Dumpster was thoughtfully provided). Then they sat through an inspirational video by a National Geographic photographer whose funereally paced pronouncements on "everyday creativity" sounded suspiciously like the old "Deep Thoughts, by Jack Handy," parody of Saturday Night Live fame ("There's always more than one right answer! Don't be afraid to make mistakes!").

And, finally, there is this ten-minute tour, the only orientation these new teachers will get before the students arrive in two days, a brief jaunt through the school's less-than-impressive physical plant. Like most newcomers, they gape at the aged carpets, walls, furniture, and double-decker rows of lockers in the halls, all colored in a rainbow of oranges, mustards, yellows, browns, and harvest golds-a palette traditionally reserved for certain 1970s-era suburban kitchens, but repeated extravagantly here in classroom after classroom. For those used to it, the extraordinary ugliness is a point of pride, testament to the fact that Whitney manages to be the top-ranked high school in all of California despite receiving less money per pupil than any other school in its district. But these are new teachers, unaware of such subtle charms. They're looking less prideful than shell-shocked.

Improta takes pity on them. She simply meant to inform, not to horrify, when she dished a little on cheating-better to be prepared than blindsided, she figures. "They're really good kids here," she promises. "This is a great place to teach. But they're under such pressure-from their parents, from us, from the colleges. Maybe it's partly our fault, but some of them feel compelled to cheat. So you really have to watch them, that's all."

And then they arrive back at the administration office suite, the tour ending where it began, next to the orange-and-yellow counter piled high with doughnut-shop goodies for the staff, with stacks of first-day student information packets ready for stapling, and with the principal, Dr. Thomas Brock, who for no particular reason at all is standing atop the counter, surveying his domain with a broad smile on his bearded face. "Welcome to Whitney High School," Improta remembers to say before heading off to prep her room.

Requests for permission to make copies of any part of the work should be mailed to the following address: Permissions Department, Harcourt, Inc.,

PRAISE FOR SCHOOL OF DREAMS

"A masterly example of passionate yet even-handed reporting . . . Deserves an A+, even without grade inflation." -Michael Dirda, The Washington Post book world 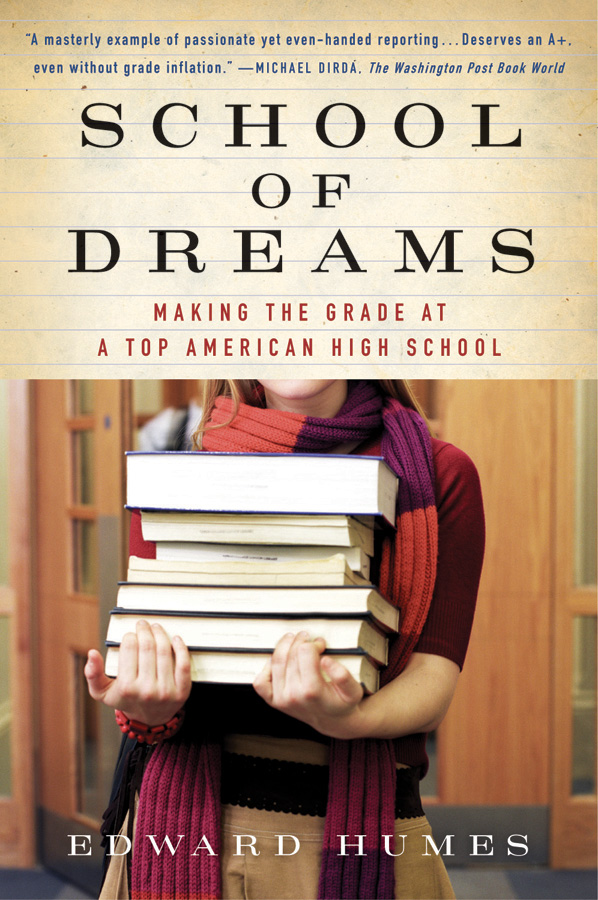