Savage Park: A Meditation on Play, Space, and Risk for Americans Who Are Nervous, Distracted, and Afraid to Die

Part memoir, part manifesto, this exploration of the underside of America’s obsession with safety is prompted by the author’s visit to a thrillingly alarming adventure playground in Tokyo.

"A fascinating and daresay essential meditation on childhood, parenthood, and the importance of wild spaces for those wild creatures known as kids."—Dave Eggers

How fully can the world be explored when you are focused on trying not to die?

This is the question that lies at the heart of Amy Fusselman’s Savage Park. America is the land of safety, of protecting children to make sure that nothing can possibly hurt them. But while on a trip to Tokyo with her family, Fusselman stumbled upon an adventure playground called Hanegi Playpark, where children sawed wood, hammered nails, and built open fires. Her conceptions of space, risk, and play were shattered. In asking us to reexamine fundamental ideas about our approaches to space and risk and how we pass these concepts down to our children, Fusselman also asks us to look at the world in a different way. Perhaps it isn’t variety, but fear that is the spice of life. This startling revelation is at the heart of Savage Park, and will make readers look at the world in a whole new way.

“I yield to no one in my admiration for Amy Fusselman’s work. Her new book, Savage Park, further explores with astonishing power, eloquence, precision, and acid humor her obsessive, necessary theme: the gossamer-thin separation between life and death.” —David Shields, author of Reality Hunger

“In this unusually refreshing meditation (which reads like a novel), we are given a tour of the space around and within us. With poetic efficiency Amy Fusselman reveals what makes us savage or not; why secret, wild spaces are essential; and why playing should be taken seriously.” —Philippe Petit, high-wire artist

About the author
Amy Fusselman

AMY FUSSELMAN is the author of The Pharmacist’s Mate and 8. As “Dr.” Fusselman, she writes the “Family Practice” parenting column for McSweeney’s Internet Tendency. Her work has also appeared in the New York Times Magazine, Ms. magazine, Hairpin, and ARTnews.

Early one spring morning several years ago, I received an e-mail from my USSR-born, New York City–bred theater-director friend Yelena inviting me and my family (which then consisted of my husband, Frank, and our two sons, King and Mick, ages five and two) to visit her and her family (which then consisted of her husband, R, and their two sons, Chuck and Gen, ages four and one) at their new home in Tokyo, with the understanding that if we chose to come, we would stay for at least a month.

I do not believe the English language contains a word that expresses all that this gesture was. Her invitation to us was a feat. She inhabited her space with such generosity that she enlarged it. And then, from that expanse, she called to us: Come in.

She summoned us without much consideration, it seemed, for the space between us. The distance between New York City and Tokyo, after all, is basically the length of the world. It was as if she didn’t view the journey we would have to

take to get to her as daunting, formidable, or even, really, interesting.

The distance was just space, for her. And she did not see space as an enemy. She was not worried, as I was, about what it would be like to fly thirteen hours with small children, never having flown longer than two and a half hours with them before. She did not regard space as a thing to be crossed in a belabored, linear way, like Columbus suffering for months, sick and arthritic, in his leaky, worm-rotted ship as it bobbed unevenly toward an unknown continent.

Space, for her, was like a toy. It was a thing that could and should be manipulated; a medium to be expanded, contracted, and fiddled with. As far as she was concerned, we would get on a plane, which was not a machine for crossing space but a machine for contracting time, and we would be here/there in the blink of an eye.

When we got the invitation, my husband, Frank, and I looked at each other: When would we ever have an opportunity like this again?

Frank and I told the boys we were going on a journey to Japan. I pointed out New York on the globe. “From here,” I said, dragging my finger across the world as I simultaneously spun it, “to there,” I said.

They glanced at us, unfazed, and continued pushing their smiling toy trains around the figure eight of wooden track that was set up on the train table.

Nervous about the long flight from NYC to Tokyo, I decided that we would fly from NYC to LA first and then stay over there for a night in order to cut down on the number of hours per flight and get used to the time change.

Of course, this only made the whole transition worse — more drawn out, and thus more nerve-racking — but I had not yet wrapped my brain around the concept that traveling across space was not a thing to be suffered through.

Naturally, the journey was long and arduous. After arriving in LA, we dropped our luggage at a lovely hotel, visited a train museum called Travel Town, returned to the hotel and slept, fitfully, and then woke up groggy the next morning, only to pack our bags and head to the airport again. Then we flew.

When we finally loaded our sweaty, sleepy selves into a cab outside the Tokyo airport, I dropped my head back on the pristine white doily placed like a pressed flower on the top of the seatback and slept like a drooling drunk, if drooling drunks can still be nervous. I was nervous in particular because I wasn’t sure if we had accurately communicated our destination to the driver; he spoke no English, and we spoke no Japanese. With no idea where we were or where we were going, we couldn’t even tell if we were lost.

I rode like this, almost unconscious, my head flung back, my mouth open, my eyes half closed, passing indecipherable signs in the dark. When we pulled up in front of Yelena’s apartment — how long did it take to get there? A minute? An hour? — she was sitting on her stoop in a witch’s hat. It was Halloween. Her four-year-old son, Chuck, who was dressed as a skeleton, stood beside her holding a bowl of candy.

I hugged Yelena. “Trick or treat,” I said.

Frank and I shouldered our heavy bags and our sack-like, sleeping children and carried them up the steps and into Yelena’s apartment, the chocolate Chuck had just given us melting in our mouths. I set Mick down on one of the two foldout couches that were to be our beds for the next three weeks and then lay down beside him. Yelena tried to convince me to stay awake — it was about six in the evening — but I could not.

Sure enough, at three in the morning, Mick and I were up. We snuck out of the apartment in order not to wake anyone, and I put him in his stroller and strolled him through the dark, silent streets, talking nonsense — it was the Day of the Dead, I remember informing him helpfully — trying and failing to find the logic of Manhattan’s crude but reliable grid in Tokyo’s delicately unfolding swirl.

We ended up sitting in the deserted, lit-up parking lot of an all-night convenience store at four thirty in the morning, sharing a chocolate steamed bun. Mick washed it down with some strawberry milk. I drank hot coffee out of a can.

Yelena was right, I understood then, in her dismissal of what it took to get here. What was harder was this other thing she was encouraging me to do, which was to call her home my home and, beyond that, to call wherever I was my home; to view space not as a place that is mine here, and yours there, but as a venue that is ours and that we are in together.

Being exhausted and, I thought, out of my element, I continued to resist her and her big ideas.

Among the first things we learn about space, as infants having very recently arrived in it, is that we can’t just leave it. We can move ourselves around in it, and we can be transported in it, but the fact is, we are here.

Years go by. We grow accustomed to this strange and interesting situation — this hereness. And, as adults, what we end up saying to our children about space and our human place in it is mostly a long and complicated narrative of how to move our bodies safely and respectfully in relation to other people and things.

This adult-generated stream of language — which basically completely ignores the idea that space is a medium that can be experienced and responded to sensitively — is like a darkly magical incantation, in that it makes space disappear.

Of course it is understandable that we adults should hold this rather shortsighted perspective. There are many wonderful things to focus on here on earth. The trees are lovely, the food tastes great, there are toys, and, not least important, other human beings are fantastically interesting and may serve as warm, comforting ballast to cling to as we float along, all of

"In this unusually refreshing meditation (which reads like a novel), we are given a tour of the space around and within us. With poetic efficiency Amy Fusselman reveals what makes us savage or not; why secret, wild spaces are essential; and, why playing should be taken seriously. I should add, she frightened me with: It is still illegal to climb a tree in Central Park!" 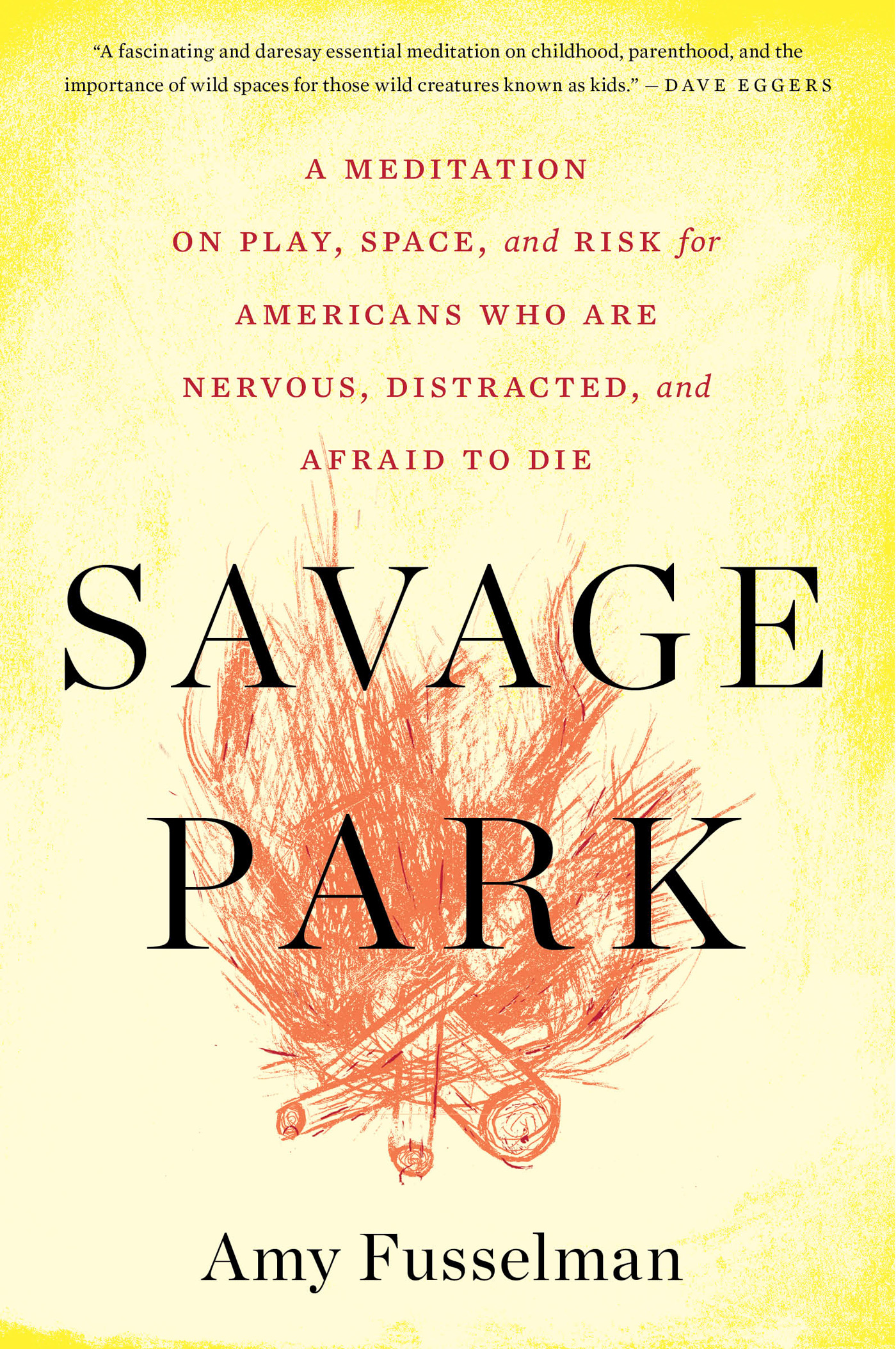