The second YA novel from a Printz Honor winner, now in paperback

When Iggy Corso gets kicked out of high school, there's no one for him to tell. His mother has gone off, his father is stoned on the couch, and the phone's been disconnected, so even the social worker can't get through. Leaving his public housing behind, Iggy ventures into the world to make something of his life. It's not easy when you're sixteen, have no skills, and your only friend is mixed up with the dealer who got your mom hooked. But Iggy is . . . Iggy, and he has the kind of wisdom that lets him see what no one else can.
Includes an author's note.

About the author
K. L. Going

K. L. GOING is the author of FAT KID RULES THE WORLD, a Michael L. Printz honor book, and THE LIBERATION OF GABRIEL KING, a southern middle grade novel. She's had many jobs, including assistant at a Manhattan literary agency and manager of an independent bookstore, but now she writes full-time. She lives in Glen Spey, New York.

So I got kicked out

So I got kicked out of school today, which is not so great but

also not entirely unexpected, and I went back to Public Housing where I live to tell my parents all about it but my mom went visiting someone or other and probably isn’t coming back and my dad is stoned off his ass on the couch like he always is, so somehow I’m not getting the vibe that he’d really, you know, care, so I think, Here’s what I’m going to do: First I’ve got to make a plan. And this is part of the plan—making a plan—so really I’m doing good already.

If my dad was awake part of the plan would be telling him about the trouble at school so he would know it was not entirely my fault. This is how it happened:

Me (coming in late to Spanish class because I followed a hot new girl): Can I sit here?

Mrs. Brando (confused): I think you have the wrong classroom.

Mrs. Brando (really patronizing): Son, it is December and I have not seen you in this class even once before, so I don’t know what classroom you are looking for. Are you new here, too?

Me (being real patient): Nooo, I am in this class and if you’d just check your list from the beginning of the year you’d see that. (under my breath really freaking quietly) Bitch.

Mrs. Brando (flipping out): Are you threatening me? Do you have a weapon? Are you on drugs? Someone get the principal. Call security. Help! Help! Help!

Then all the other teachers come in because they think I’m going to pull a Columbine, and everyone’s asking what happened only no one’s asking me and in Mrs. Brando’s version of it, I moved like I was going to hit her or maybe pull something out of my jacket, and even though hitting someone and pulling something out of your jacket require two totally different hand motions, the one being an up and out motion and the other being a down and in motion, no one comes to my defense and instead everyone in the classroom nods in agreement with Mrs. Brando’s story and you would think they didn’t know me all these years, the traitors.

Then the security guy pushes my face into the concrete wall, and after that he drags me to the principal’s office and Principal Olmos talks to me for a long time.

"Remember how you wanted to drop Spanish for metal shop?" he asks, tapping his desk.

I look at the ceiling and the floor and the walls.

"Did you think about your actions before you went into that classroom?"

I thought about the hot new girl.

Principal Olmos shakes his head. "Don’t be silent now," he tells me. "The only time you cease talking is when you should be making an attempt to better yourself—participating in class, for example, or explaining your actions, which frankly, are largely incomprehensible."

I wonder why I am incomprehensible because everything I do makes perfect sense to me.

"Umm," I start, "’cause, see, I was just going in there to learn some Spanish because I changed my mind about things and I wasn’t going to hit anyone—Mrs. Brando is just an old . . . uhh, teacher, and . . ."

Principal Olmos holds up one hand.

"Actually," he says, taking a deep breath, "it’s too late." He shakes his head again.

"It’s time to start thinking about your future outside of this high school. Mrs. Brando wants to file serious charges—charges that should warrant police involvement . . ." He looks me right in the eye like I am going D-O-W-N, then he breaks the look.

"But we’re not going to go that route," he says. "I’ll speak to Mrs. Brando about not involving the police, but that’s the best I can do. I’m afraid I’ll be recommending to the school superintendent that your time at Carver High be terminated."

Now my eyes get big, because what does he mean—terminated?

"There will be a hearing within the next five days to officially determine your status. If your parents wish to hire an attorney, of course they are welcome to do so, but given your past suspensions, your disciplinary history, the number of times you’ve had detention this year alone, and of course the incident with the spray painting, I think the outcome is virtually certain."

I think, Oh, so terminated means "over." And it is not like I didn’t see this coming, but this time I can tell it is real so my mind wanders and I start thinking how the girl wasn’t even that hot and my parents will never show up to a hearing and what will I amount to anyway?

I could offer him money, only I don’t have any.

". . . clearly not suited for this environment. Perhaps a technical school . . ."

Maybe I will say I was on drugs so they will decide to help me, only this may not work because I already have a social worker and everyone thinks I am on drugs even though I’m not, and it has not helped me once yet.

I look up and Principal Olmos is looking like he feels sorry about everything, so I don’t say any of the things I thought about saying and I don’t even beg for mercy. I just sit there thinking how I screwed up again and that’s when I want to fucking cry, or maybe hit someone, because even though I am not so great a student, I am not harmful and if they gave me another chance I would do okay, I swear.

Then Principal Olmos looks at me for a long time, and finally he sighs and says, "Honestly, I believe you’re a good kid."

He leans across his desk.

"Lots of people around here don’t think that, but I do," he says. "You’ve had a lot to overcome in your life, but that’s no excuse for poor discipline. We can all make something of ourselves, no matter what our situation. We can do something that contributes to the world, live a life that has meaning. Do you believe that?"

I’ve never thought about meaning—not even once—but I nod because, okay, whatever.

Principal Olmos stands up and closes my folder. "You’ll have to stay here until the end of the school day while we continue trying to contact your parents. If we can’t reach them I’ll have the social worker come by your house to deliver an official letter stating you have out-of-school suspension pending a hearing." He pauses. "I’m . . . sorry."

He reaches out to shake my hand like we are both adults and I am not a kid or a student anymore, and that’s when it hits me that I am on my own, which is scary because even though I’m sixteen I am only a freshman and that is too soon to get kicked out. Plus, I have no skills, and if you do not graduate high school and you have no skills then you are shit out of luck.

So I decide that Principal Olmos is wrong about the hearing and even though he thinks it is a done deal I will make a plan. And the kind of plan I will make is a How-to-Change-Everyone’s-Mind-About-Me plan since Principal Olmos is the only one who thinks I am a decent guy, but really, I am not so bad a person once you get to know me.

All rights reserved. No part of this publication may be reproduced

or transmitted in any form or by any means, electronic o... 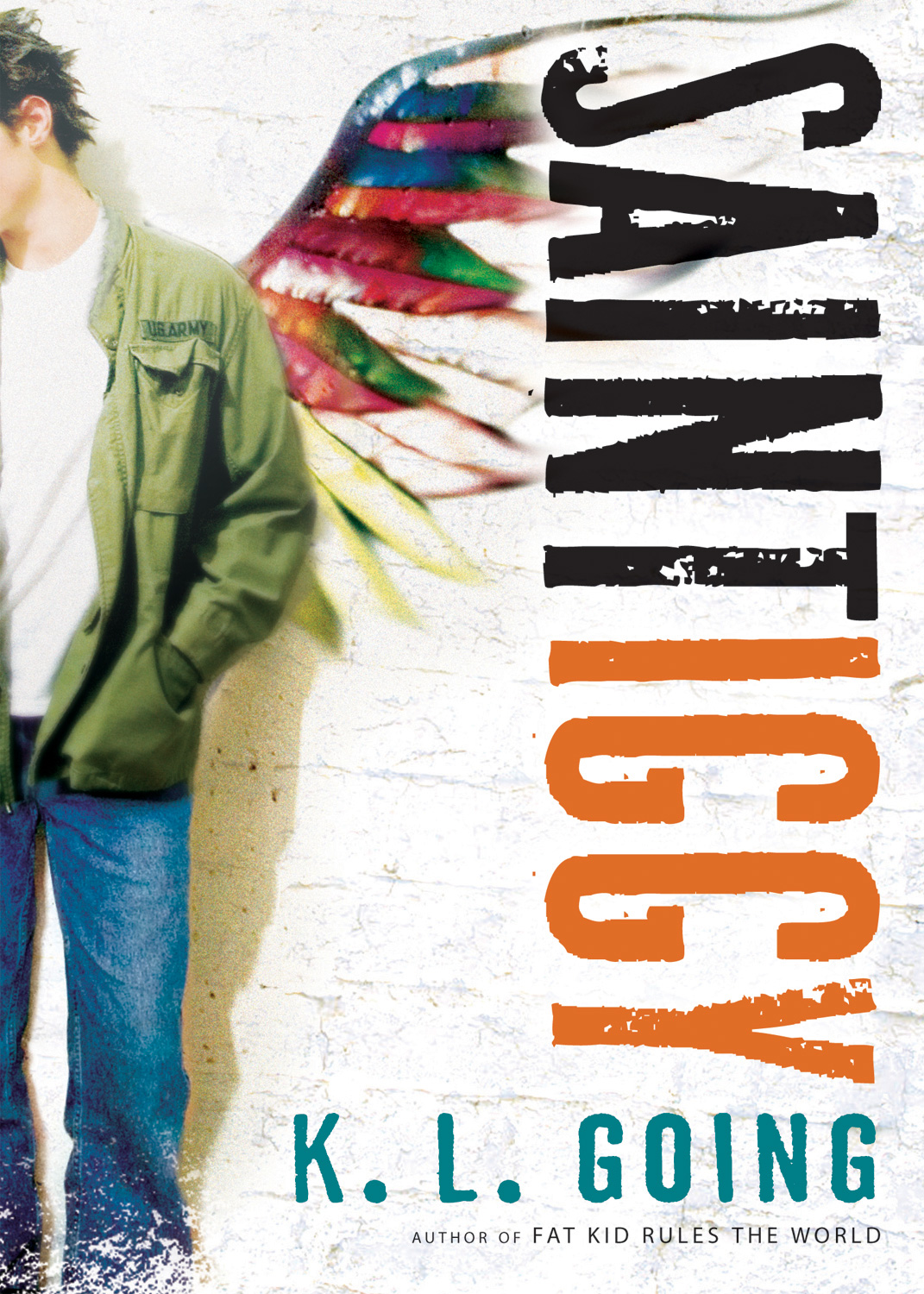