Rapture of the Deep: Being an Account of the Further Adventures of Jacky Faber, Soldier, Sailor, Mermaid, Spy

On the very day that Jacky Faber is to wed her true love, she is kidnapped by British Naval Intelligence and forced to embark on yet another daring mission—this time to search for sunken Spanish gold. But when Jacky is involved, things don't always go as planned.

Jacky has survived battles on the high seas, the stifling propriety of a Boston finishing school, and even confinement in a dank French prison. But no adventure has quite matched her opportunistic street-urchin desires—until now.

On the very day that Jacky Faber is to wed her true love, she is kidnapped by British Naval Intelligence and forced to embark on yet another daring mission—this time to search for sunken Spanish gold. But when Jacky is involved, things don't always go as planned.

Jacky has survived battles on the high seas, the stifling propriety of a Boston finishing school, and even confinement in a dank French prison. But no adventure has quite matched her opportunistic street-urchin desires—until now.

“You, Miss,” pronounces Higgins, “are a complete mess.”

I groan and stretch out over my lovely bed on my lovely schooner, the Nancy B. Alsop, neither of which I had ever expected to see again.

“Please calm down, Miss. I know you want to be with your young man, but Mr. Fletcher’s feet are a mere four feet above your head, tending to the business of getting you and your ship as far away from the coast of France as quickly as possible. Please let him do that and allow me to take care of you.”

You might have thought that Jaimy and I would have tumbled into the sack right then and there, as soon as we got back on the Nancy B., but no, such was not to be.While Jaimy assumed the con on the quarterdeck and gave orders to set sail and fly, Higgins hauled my sobbing and gasping self into my cabin, where he stripped me down to clean me up and, hopefully, make me presentable. That’s when he discovered that I was covered head to toe with scratches and bruises from when my dear Mathilde had dragged me across that battlefield in Germany, my foot being caught in my stirrup and she being blind with terror. I don’t blame her none—she was a good horse and already I miss her.

“Good Lord,” exclaims Higgins. “Amongst a veritable constellation of contusions, right there is a bruise the size of a cricket ball. A lovely shade of purple and yellow, as well, I might add.”

My mind is still reeling from the events of the past hour. “If you’ve never been dragged on your back across some very rough ground by a terrified horse, Higgins, then you have no room to chastise me.”

“I believe I will take a pass on that particular experience, Miss. Hold still now.”

I feel the healing salve being applied to my poor bare and much abused bum.

I give out a low moan and turn over on my back.

“Ah.Your front is not quite so bad. Just a bit of salve on your shoulder and some about your knees, there. Good.”

I don’t mind being tended to by my dear Higgins. In fact, I’m loving it—that and the fact that I am still alive. I had spent the time in the lifeboat that brought me here curled up in Jaimy’s lap, trembling and weeping—after all, a mere hour ago I had been on my knees on the beach, waiting for a bullet from the pistol of spymaster Jardineaux to scatter my brains all over the sand—and I do need some time to calm down.

Higgins takes my shako and places it on my writing table. “Yet another trophy,” he muses, putting his pinkie through the bullet hole in the front. “I shall tell you, Miss, but first will you tell me about this?” He holds up the medal I had worn about my neck.

“It is the Legion of Honor. I didn’t deserve it, but L’empereur gave it to me, anyway,” says I, once again stretching out and reveling in the smooth sheets on my bed, my own dear bed, which tonight will hold bothme and James Emerson Fletcher—right next to my own sweet self. Oh yes! “The Emperor?” asks Higgins, for once surprised and incredulous. “Napoleon Bonaparte himself ?”

“Right. He had given me a ride in his coach after the Battle of Jena. He wanted me to deliver a letter to Empress Josephine.Which I did.”

“You never fail to astound me,Miss.”

“It was not all that astonishing,Higgins,” I say, and then proceed to tell him of Jardineaux, the guillotine, Madame Pelletier, Les Petites Gamines, Jean-Paul,Marshal De Groot, my commission as a second lieutenant in the Grand Army, Bardot, the Clodhoppers, my job as messenger between the generals and Napoleon, my delivery of Napoleon’s message to Murat, which ordered him to charge the Prussian line, meeting Randall Trevelyne again, the great and terrible battle, and finally, that dark time down on my knees on that beach, crying, and expecting nothing but death.

“Remarkable,” says Higgins, looking off into the middle distance. “However, we might have a problem here.With that message you delivered. If Naval Intelligence gets wind of that, it might be trouble. And they certainly will not be pleased to hear of the death of Jardineaux, whom they considered very valuable.” He shakes his head and sighs. “I could have told them that when you,Miss, get thrown into any mix, unforeseen events occur, but I was not given that opportunity. Not till later, and then it was too late.”

“You asked how I knew you would be on that beach. Well, after I learned, through certain sources, that you had been pressed into the Intelligence Service, I, myself, using my Hollingsworth connections, joined that same service so as to be able to find you. I met and gained the confidence of Mr. Peel, Sir Grenville, and the very delightful Dr. Sebastian. We passed many pleasant hours at dinners and in intellectual discussions. Dr. Sebastian declared himself to be especially fond of you—he greatly appreciated the fine illustrations you did for his naturalist endeavors and hopes he will be working with you again someday.”

“So I have confessed to treason in front of an agent of the Intelligence Branch?” I ask, with some dread. Higgins is my dearest friend, but male honor and all . . .

“Never fear, Miss,” he says. “I would never betray you, but there are other agents in France, some of whom might have learned of your actions and reported them to my colleagues in the Admiralty. We shall see. Now let us get you back into some clothing. Since we left England in a hurry, I did not have time to purchase any female garments for you. I do, however, have your midshipman uniform, the one you were wearing when you were captured.”

“I have a dress, there in my knapsack. It will serve as my wedding dress.”

Higgins reaches into my bag and pulls out my white gown, the one dress I had taken with me on my way to join Napoleon and the Grand Army of France.

“You are so right, Higgins.”

“And your underclothing is not even close to dry.”

“The dress itself will be enough. I don’t plan to have it on long,” I say, popping up and putting my arms in the air so that Higgins can slip the dress over them and then over me. He adjusts it, and then I regard myself in my mirror. Not too bad, considering . . . “May I ask, Miss, if the color of the dress is still appropriate for the wedding you seem to be planning?”

“Yes, it is, Higgins. I’ve done just about everything else, but not yet that particular thing,” I say, getting up from my bed and not taking offense at Higgins’s question as to the state of my rather shaky virtue. Higgins has always been my friend and protector, and has often given me gentle advice concerning my often impetuous conduct with the assorted males whom I have met on my travels, but he has never interfered when I finally set a course in that regard.

“Ah. Well. I ask only out of concern for your welfare and what you might recently have gone through.”

“I know that,Higgins,” I reply, continuing to look atmy reflection. “Should I wear my wig?”

“Ohhhh.” Higgins shudders. “That awful thing? No. Please. I think you will...

"Fans of the series will eat this title up." --School Library Journal

“Meyer weaves details of 19th-century history, lore, and ballads into a fast-paced and often amusing swashbuckler. Fans of the Bloody Jack Adventure series will relish the latest escapades of this high-spirited and decidedly unconventional heroine.” —Booklist

“The author has done his homework, weaving many painless history lessons into the book. With its strong female character, fast pace, and fine writing, this will be a book difficult for the young adult reader to put down and one that will leave the reader craving the next title.” —Children's Literature

“Fans who have read the previous titles in the series will be treated to a fresh escapade and familiar characters but the story can stand alone for new readers. This will appeal to anyone who enjoys historical fiction, strong female heroines, adventure, and pirates.” —VOYA 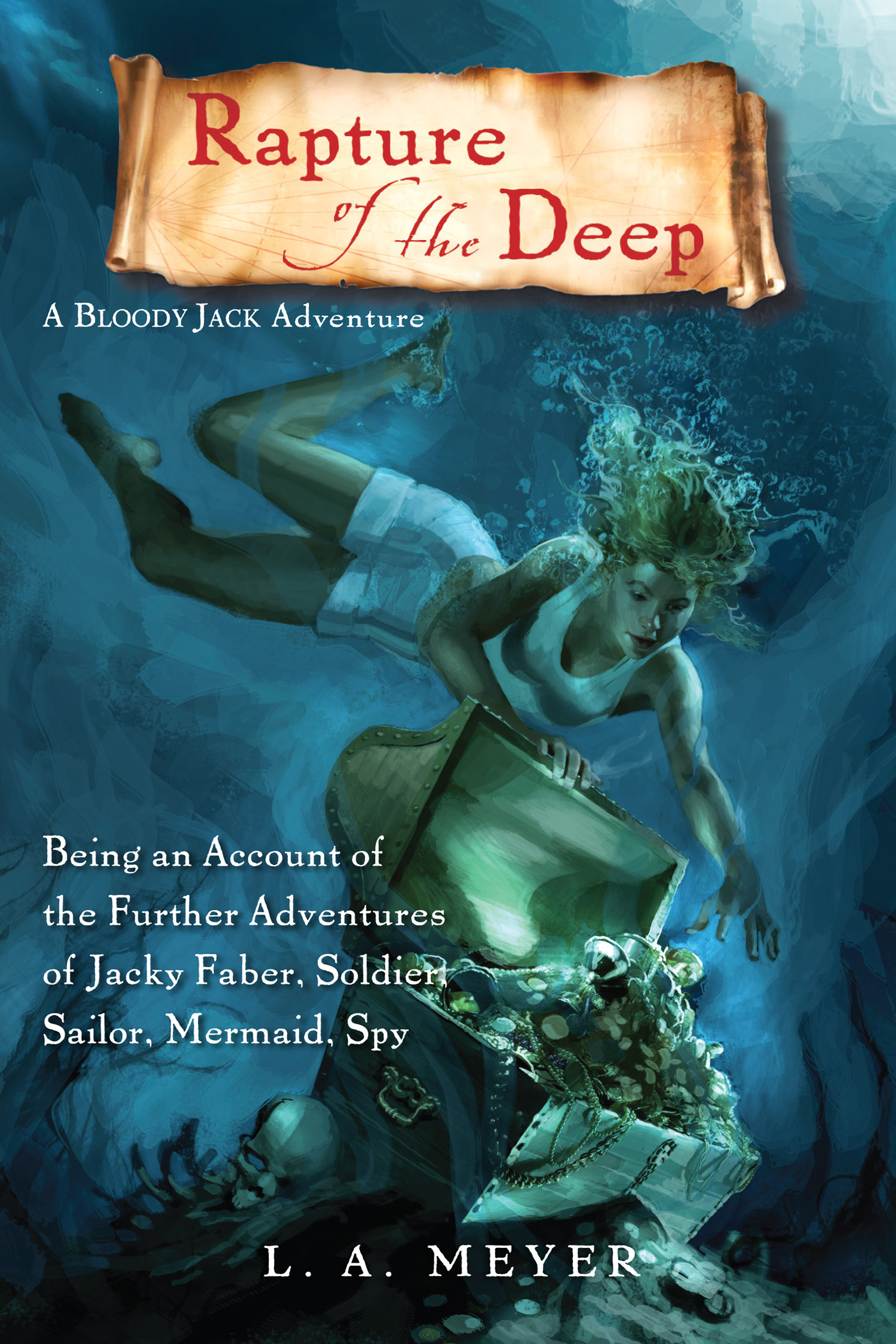