It’s not easy being a nine-year-old kid in the middle of a busy, gifted family. Especially when the list of things you’re good at includes only two items—“Crying” and “Stopping crying”—and the list of things you’re not good at seems to be getting longer every day.
When Sophie’s mom suggests that she’s good at being kind and just needs a little more practice, Sophie feels hopeful. But being kind to a grouchy old lady or her big sister, Nora, or the weird new girl at school isn’t as easy as it sounds. If only Sophie were a queen, she could practice being kind to commoners instead. It would be much more dignified and elegant. And she would finally get to wear her very own diamond tiara. . . .

From the author of the popular Owen Foote books, here is a funny, observant novel about an irrepressible girl, as quirky and original in her own way as Owen is in his, in search of her own special talent.

Tt’s not easy being a nine-year-old kid in the middle of a busy, gifted family. Especially when the list of things you’re good at includes only two items—“Crying” and “Stopping crying”—and the list of things you’re not good at seems to be getting longer every day.
When Sophie’s mom suggests that she’s good at being kind and just needs a little more practice, Sophie feels hopeful. But being kind to a grouchy old lady or her big sister, Nora, or the weird new girl at school isn’t as easy as it sounds. If only Sophie were a queen, she could practice being kind to commoners instead. It would be much more dignified and elegant. And she would finally get to wear her very own diamond tiara. . . .

From the author of the popular Owen Foote books, here is a funny, observant novel about an irrepressible girl, as quirky and original in her own way as Owen is in his, in search of her own special talent.

About the author
Stephanie Greene

Stephanie Greene is the author of many books for young readers, including the popular Owen Foote books. Ms. Greene lives in Chapel Hill, N.C. Her website is www.stephaniegreenebooks.com.

The day Nora and Sophie’s ballet teacher, Mrs. Ogilvy, told their mother after the recital that Nora should continue her lessons, but “I wouldn’t waste any more money on Sophie,” was not a good day in the Hartley household. First, because Sophie and Nora heard. And second, because when Mrs. Hartley told their father about it in the living room before dinner as the girls were going up the stairs, Mr. Hartley said, “What did I tell you?” The girls heard that, too.

Sophie ran upstairs and flung herself on her twin bed in the room she shared with Nora and sobbed for a few minutes. They were deep, heartfelt sobs, and as she sobbed, a tiny part of her listened. It was really very satisfying to think how wronged and sad she sounded. But it was a bit of a waste, too, because nobody came up to check on her for what felt like a very long time, so when Nora was finally finished in the bathroom and came into their room carrying her ballet bag, Sophie was feeling much better. Crying cheered her up, but she didn’t want Nora to know that. Sympathy cheered her up even more. “Even Daddy thinks I’m fat and clumsy,” she said to her older sister in as pitiful a voice as she could muster. “He didn’t say anything about your weight,” Nora said. She didn’t cast so much as a sympathetic look in Sophie’s direction as she opened their closet door and slipped her pink ballet slippers neatly into the two slots reserved for them in her shoe bag.

“It’s your own fault, anyway,” she went on after she had shut the door and turned back around. “Mrs. Ogilvy told you not to wear those shoes, and you did.” “I like them,” said Sophie. She gave a self-righteous little sniff, but she knew Nora was right. Mrs. Ogilvy had told the beginners’ class they were to wear their ballet slippers, tights, and white leotards for the recital, but Sophie hadn’t been able to resist wearing her new shoes. She adored them. They were the most beautiful things she had ever owned.

They were pink velvet covered with red roses. Embroidered roses with bright red petals and delicate green stems. Best of all, each rose had a tiny diamond in the middle. Well, maybe they weren’t real diamonds, but they looked like real diamonds. They sparkled like real diamonds, too. They would go perfectly with the diamond tiara Sophie was saving up for. She had been cutting pictures of people wearing tiaras out of the newspaper and magazines for months. She kept them in the drawer of her bedside table. There were pictures of real queens wearing tiaras, actresses in movies wearing tiaras, and the past two Miss Americas in their tiaras. She even had a picture of a dog wearing one.

Sometimes Sophie put a book on her head and practiced walking slowly around her room with her chin up and her head very still, the way she imagined she would have to walk when she finally got her tiara. She was planning on wearing it all day, every day, for as long as she lived. Everyone would have to curtsy to her. Even Nora. Until then, her pink velvet shoes would have to do. They were wonderful. Even the straps were special. They could be worn up or down.

Which is where Sophie got into trouble.

“You were supposed to be a snowflake, for heaven’s sake, and drift across the stage,” said Nora. “That’s what the rest of your class did. But not you! You clopped all over the stage the entire recital. You sounded more like a hailstorm! Everyone could hear you. I was so embarrassed, I almost died.” “I wasn’t embarrassed,” said Sophie. She wanted to say, I felt beautiful, but she knew it would make Nora mad. “Well, you should have been.” Nora shoved her leotard into her top drawer without folding it and slammed the drawer shut, which meant she was already mad. After a life of sharing a bedroom with her sister, Sophie knew that Nora usually took very good care of her clothing. She folded everything neatly and even buttoned all the buttons on her sweaters before she put them away. When she started stuffing things into her drawers, it was a bad sign. Sophie tried one last sniff, in case Nora had a thread of sympathy in her, bbut it was no good. Her nose was dry.

“You hate ballet, Sophie, you know you do,” Nora said in a reasonable, annoying-older-sister kind offfff way. “You only took it because you were giving us all headaches with the violin. And the only reason you took the violin was because Thad takes it.” “I liked the smell of the rosin,” said Sophie.

“And look what happened with your riding lessons,” Nora went on. “You only wanted to ride horses because the girl in that book you were reading rode horses. You hated it.” “It made my bottom sore.” “I don’t know how it could have.” Nora picked up her hairbrush, gave a quick glance at the rounded half moon of Sophie’s belly peeking out between the top of her shorts and the bottom of her shirt, and bent over to brush her hair one hundred strokes. “You have enough padding,” she said from behind a curtain of hair.

Sophie tugged half-heartedly at her shirt. She knew how much her stomach annoyed Nora. Nora was always showing her how she should take a deep breath and suck in her stomach and then throw her shoulders back so she would look better. But when she did all of that, Sophie could hardly walk, much less breathe. And she didn’t understand why a flat stomach was so wonderful in the first place. She was certainly never going to stand sideways in front of the full-length mirror on their closet door and smooth her shirt down over her stomach every night to check on it, the way Nora did. Or watch every little thing she put into her mouth and jump on and off the scale all the time like it was a trampoline. “And now look what you’ve done,” said Nora. She had stood up suddenly and sent a great wave of dark hair flying back over her head. “You’ve made a mess of your bedspread again. Before you know it, you’ll be crying about that.” Sophie looked. There was a large damp spot on her spread right under the edge of her pillow. She wiped at it with the sleeve of her shirt. “Crying makes me feel better,” she said.

“It wouldn’t if you knew how disgusting you look,” Nora said. “Most people look horrible when they cry. Eyes rimmed with red, like horrible possums, noses dripping.” She shuddered. “I never cry, it makes such a mess.” Nora had been telling Sophie she looked disgusting for as long as she could remember; Sophie was used to it. She admired her older sister enormously even so. She could have been jealous of Nora, but she wasn’t. There were too many nights when Nora had let Sophie crawl into bed with her and huddle under the blanket during thunderstorms. And all the times Nora had walked ...

"Greene conveys Sophie's emotions and thoughts with ruthless candor and the dynamics of her large family with humor and clarity."  —Booklist, ALA

"Delightfully messy family dynamic and tightly composed subplots...here's hoping there is more of Queen Sophie to come."  —Bulletin of the Center for Children's Books

"Sophie is likeable and resilient, and readers will identify with her as she works through her school and family situations."  —School Library Journal

"Greene's...humor and understanding of...family dynamics are as impressive here as in her Owen Foote books."  —Horn Book Guide 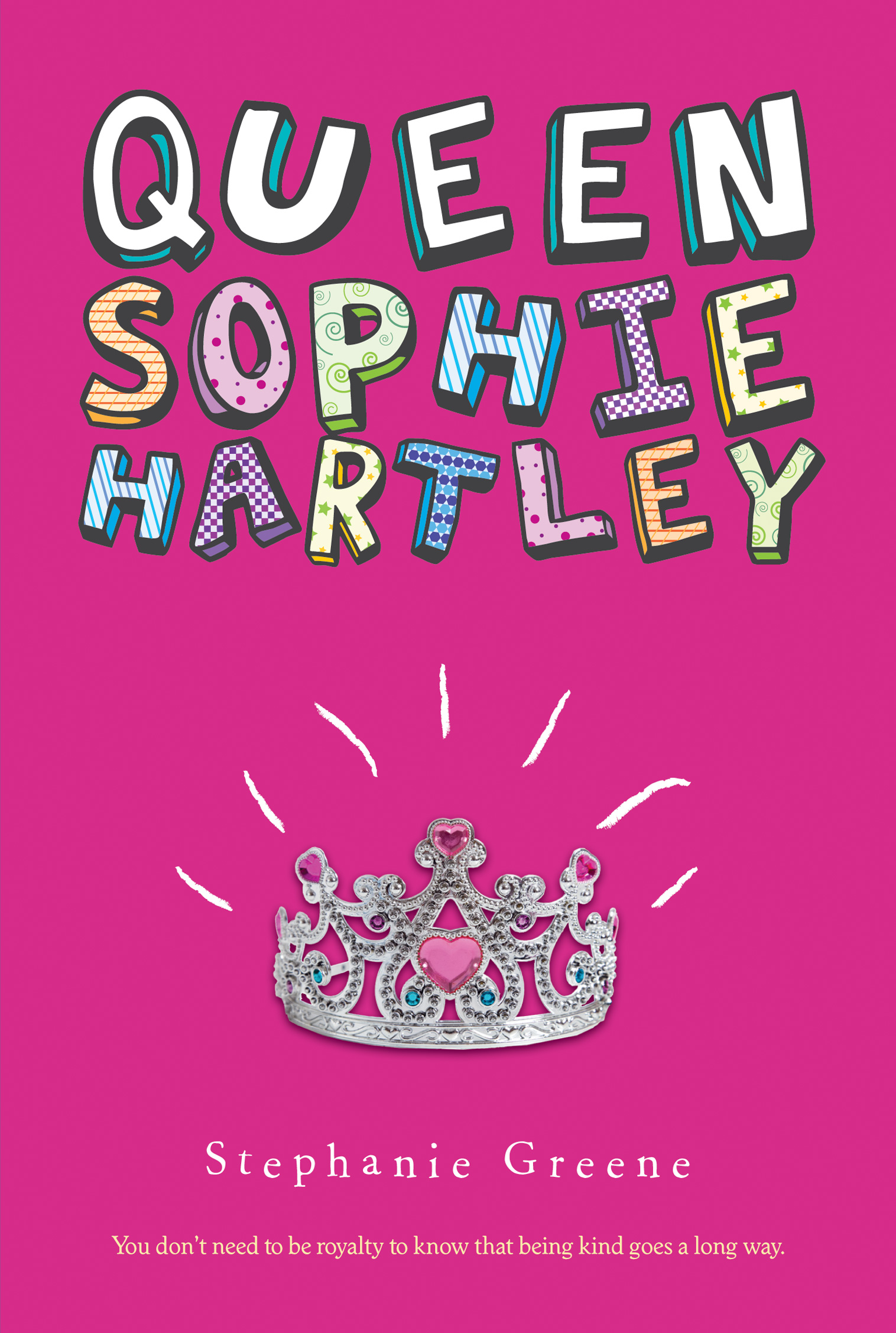