The most authoritative guide to North America's freshwater fishes, completely revised and up to date.

There are nearly 1,000 species of freshwater fishes in North America alone, and identifying them can sometimes be a daunting task. In fact, in just the twenty years since publication of the first edition of the Peterson Field Guide to Freshwater Fishes, the number of species has risen by almost 150, including 19 marine invaders and 16 newly established nonnative species. This second edition incorporates all of these new species, plus all-new maps and a collection of new and revised plates. Some of the species can be told apart only by minute differences in coloration or shape, and these beautifully illustrated plates reveal exactly how to distinguish each species.

The guide includes detailed maps and information showing where to locate each species of fish—whether that species can be found in miles-long stretches of river or small pools that cover only dozens of square feet. The ichthyologic world of the twenty-first century is not the same as it was in the twentieth, and this brand-new edition of the definitive field guide to freshwater fishes reflects these many changes.

About the author
Lawrence M. Page

DR. LAWRENCE M. PAGE is curator of fishes at the Florida Museum of Natural History. He is also principal scientist emeritus for the Illinois Natural History Survey's Center for Biodiversity, and an affiliate professor at the University of Florida.

DR. BROOKS M. BURR is a professor in the department of zoology, Southern Illinois University at Carbondale, and is an affiliate scientist of the Illinois Natural History Survey. Dr. Page and Dr. Burr have extensive field experience and have published numerous papers on the freshwater fishes of North America.

in 1991. Since then it has been a primary source of information

on identification of North American freshwater fishes. This

second edition increases the number of species in the guide from

768 to 909, incorporates new maps and several new and revised

plates, and corrects errors. The increase in number of species is

the result of adding 114 newly recognized species native to the

species recognized in the first edition were deleted as names were

synonymized or as exotic species thought to be established disappeared.

The ichthyofauna of the twenty-first century is not that

of the twentieth century, and a revision of this guide was badly

needed. We hope we have succeeded in making it current as well

as more user-friendly. Suggestions for improvements and notifications

of errors are welcome.—LMP and BMB

How To Use This Guide

from observing and catching fishes. Ichthyologists and other scientists

study fishes to learn more about the evolution of life, the

history of our continent, and how natural resources can be better

managed. For these interests and related endeavors, accurate

identification of fishes is essential. This guide includes all fishes

in fresh waters of North America north of Mexico.

Fishes are aquatic vertebrates with fins and gills throughout

life. Currently recognized as valid are about 31,000 species, of

of the United States and Canada. Another 58 species from

elsewhere in the world have been established in our area, and 20

marine species are encountered often enough in fresh water to

be included in this guide, bringing the total number of species to

United States and Canada, and another 11 families have marine

species that occasionally enter our rivers. Eight other families

are represented by introduced (exotic) species. Although our fish

fauna represents a fraction of the world’s total, it is Earth’s most

All freshwater fishes known from North America north of

Mexico are included in this guide. The Peterson Field Guide to

fishes likely to be encountered in fresh water.

and Scientific Names of Fishes from the United States, Canada,

and Mexico, published in 2004 by a joint committee of the American

Fisheries Society and the American Society of Ichthyologists

and Herpetologists. In a few instances in which the committee

changed a common name, we chose to keep the name used in the

first edition of this field guide.

Scientific names of species consist of two Latinized and italicized

words, e.g., Lepomis punctatus. The first is the genus, which

begins with a capital letter. The second is the “specific epithet”

and is not capitalized. A subspecies has a third descriptor, e.g., Lepomis

punctatus miniatus. Genera are grouped into families (with

names that end in idae), families into orders (ending in iformes),

and orders into classes.

Color plates were painted from live fishes or, more often, from

variation in color among closely related species. Fishes are not

drawn to scale, but much larger species usually are shown larger

species are illustrated in text figures.

Although ichthyologists use the metric system, guide users remain

familiar with inches, feet, and pounds. Measurements are given

in both systems. A short rule comparing metric and U.S. units

appears below and on the back cover. The maximum total length

known (tip of snout, lip, or chin—whichever is farthest forward—

to end of longer caudal fin lobe) is given for each species. For

small fishes, this number is given in quarter-inches and tenths

and for large fishes in feet and meters.

If the maximum length recorded was given originally in centimeters,

give various results; for example, 7.4 through 7.9 cm are all given

as equivalent to 3 in.

family names are numbers of native species in the United

States and Canada; if introduced species are in our area, number

of natives is followed by number of exotics.

Generic accounts are given for large genera and for small genera

in which all species share characters useful in identification.

If a character is described in a family or generic account, it usually

Species accounts begin with common and scientific names. In

plate or figure where the species is illustrated, or “Not shown” if

Most species accounts contain the following four sections. A

similar Species section is omitted if a species is easily identified,

Identification: This section describes the most useful characters

for identification. Usually these are color descriptions such

as “black stripe along body,” shape descriptions such as “dorsal

fin origin behind pelvic fin origin,” and unusual features such as

“barbel at corner of mouth.” The most prominent field characters

are italicized and usually appear early in the account. Accurate

to identify. Positive identification of small or single individuals

may require close examination; for that reason, we give some

characters useful in identification of preserved fishes (numbers of

similar or nearly identical to another species. Unless stated otherwise,

the description is of an adult fish, and the fish is white

below (breast and belly) and has clear fins, conditions that pertain

in most species. In many fishes, females retain colors similar

to those of young, but males become notably brighter or darker

with age. During the spawning season, males often become

much brighter in color than at any other time. When known to

differ, both “average” and “breeding male” descriptions are given.

through much of the year; in others (e.g., most minnows), bright 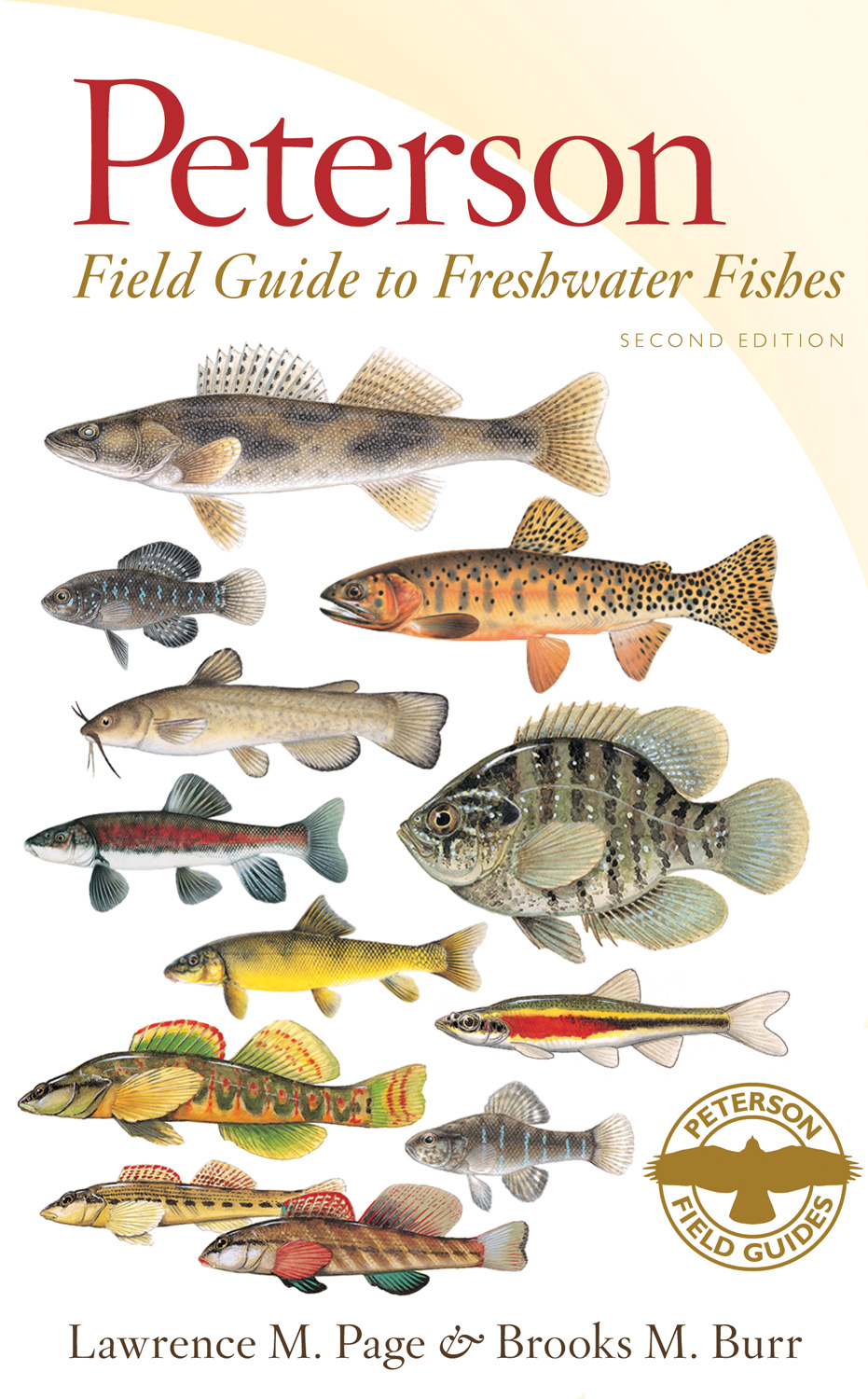