A whale-watching tour off the coast of the Washington goes horribly wrong in the debut installment of the high-stakes Survivor Diaries series. Travis and Marina will have their grit and teamwork tested to the extreme. Perfect for fans of Lauren Tarshis’ I Survived series and Gary Paulsen’s Hatchet. You will have a better chance of surviving a real-life cold-water disaster after reading this book!

A high-stakes adventure series perfect for fans of the I Survived series and Hatchet.

Eleven-year-old Travis and his family are on a whale watch off the coast of Washington when disaster strikes. The boat capsizes, throwing everyone into the ice-cold chaotic waves. Separated from their families and struggling to stay afloat, Travis and twelve-year-old Marina must use all of their grit and knowledge to survive.

About the author
Terry Lynn Johnson

“Tell me how you survived the whale attack,” the reporter said.

Not this again. I sank back into the couch cushions and rubbed my face.

“That’s not the real story,” I told him. I could hardly believe what had actually happened.

He leaned in. “Then tell me the real story. That’s why I’m here. As I explained, I’m writing a series about survivors—kids like you—who made it home alive after a life-threatening experience. I want to hear about that afternoon while you were on vacation. You and Marina were the only ones who didn’t make it to the life rafts.”

He glanced over his shoulder toward the kitchen. The smell of peanut butter cookies drifted toward us.

“I want to hear the truth so young people who read these survivor diaries can learn from you. There aren’t many eleven-year-olds who’ve had an experience like yours.”

He placed his phone on the coffee table between us and pressed Record. “So, Travis, how did you survive?”

I stared at the bald man sitting in my living room. He was asking me to talk about the worst moments of my life.

I blew out a breath. “I didn’t even know what was going on at first. Marina just yelled the warning and then the next thing you know I’m in the water. Everything was crazy loud. You know that bubbly kind of sound you hear underwater? Except not the peaceful kind like when you’re swimming. It was even worse on the surface with the waves smacking me in the face and the wind howling and people screaming and . . .”

“No, no.” He scratched at his tiny beard on his chin. “I want you to start at the beginning. The whole story. Take your time.”

I took a sip from my lemonade. “It all started with the whales.”

The boat swayed beneath me. I spread my feet apart to balance and lifted my face into the wind. It smelled like seaweed and salt and some kind of animal poop and it was awesome.

“Put this on, Trav.” Mom ambushed me with a red and black suit. She held it open for me to step into like I was five, and stuffed my arm into a sleeve.

“An immersion suit. It’s rough today, and it’s going to be chilly on the water.”

“Stacey’s not wearing one,” I said.

“Older. And wiser.” My sister didn’t look up from texting, but she smirked for my benefit.

I let Mom do up the zipper—no point in arguing. Ever since my gym accident, Mom had been hovering. It was my life.

“And I hid some animal crackers in the pocket in case you want a snack.”

“Welcome aboard the Selkie Two,” a man said through the speakers attached to the outside of the cabin.

The wheelhouse is what Dad had called it. I could see inside through the big windows to where people were sitting on benches.

“I’m your captain, Alfonso Hernandez. My daughter Marina and I are happy you’ve chosen to come with us this afternoon. July is a great time for whale watching in the Strait of Juan de Fuca.”

The captain was talking into a microphone while steering the boat from the front of the cabin. A dark-haired girl next to him waved.

“For the next three hours, we hope to find you some harbor seals and sea lions. If we’re lucky we’ll see orcas, and maybe humpbacks. There’s a ten-knot northwest wind, we’ll have a bit of chop, but nothing our fine vessel can’t handle. Let’s hope the wildlife cooperates. We do guarantee jellyfish sightings.”

Someone standing next to me at the railing chuckled.

“So let’s get to the introduction, and then we’ll be all set. We’ve got twenty-three on board today, including crew. This is a fifty-foot vessel equipped with all the latest safety features.”

I watched the girl, Marina, through the giant windows. She walked through the cabin pointing at things as her dad talked about where everything was.

My focus drifted back to the water. White lines raced across the surface. Rolling waves curled at their tops. The waves slapped against the boat as we headed out, directly toward the mountains in the background. I couldn’t believe we were finally here.

Out of everything we had planned on our vacation to Washington State, this was what I’d been looking forward to the most. I’d never seen a whale.

“Aren’t those magic bands working?” I asked, pointing to what he wore on his wrists to stop seasickness.

“Leave him be, Mandy,” said Dad, as he lurched toward the cabin.

“I’m going up,” Stacey said, and she headed for the stairs to the platform on top of the cabin. “Better cell reception.”

I started to follow but Mom pulled me back. “No, I don’t want you to slip.”

Once I got closer to the stairs, I could see Mom was right. They were steep, and that platform looked high. I was glad she’d said no, but I pretended to be disappointed.

Mom glanced back at me with worried eyes before she helped Dad into the cabin. I walked to the other side of the boat.

Freedom! The wind blew through my hair. With the suit on, I wasn’t cold at all.

“Harbor porpoises!” a voice said beside me.

I turned and saw Marina pointing out into the water. Her wide-brimmed hat was attached with a chin strap. A blue-checkered bandanna flapped around her neck, making her look like an adventurer from a magazine. 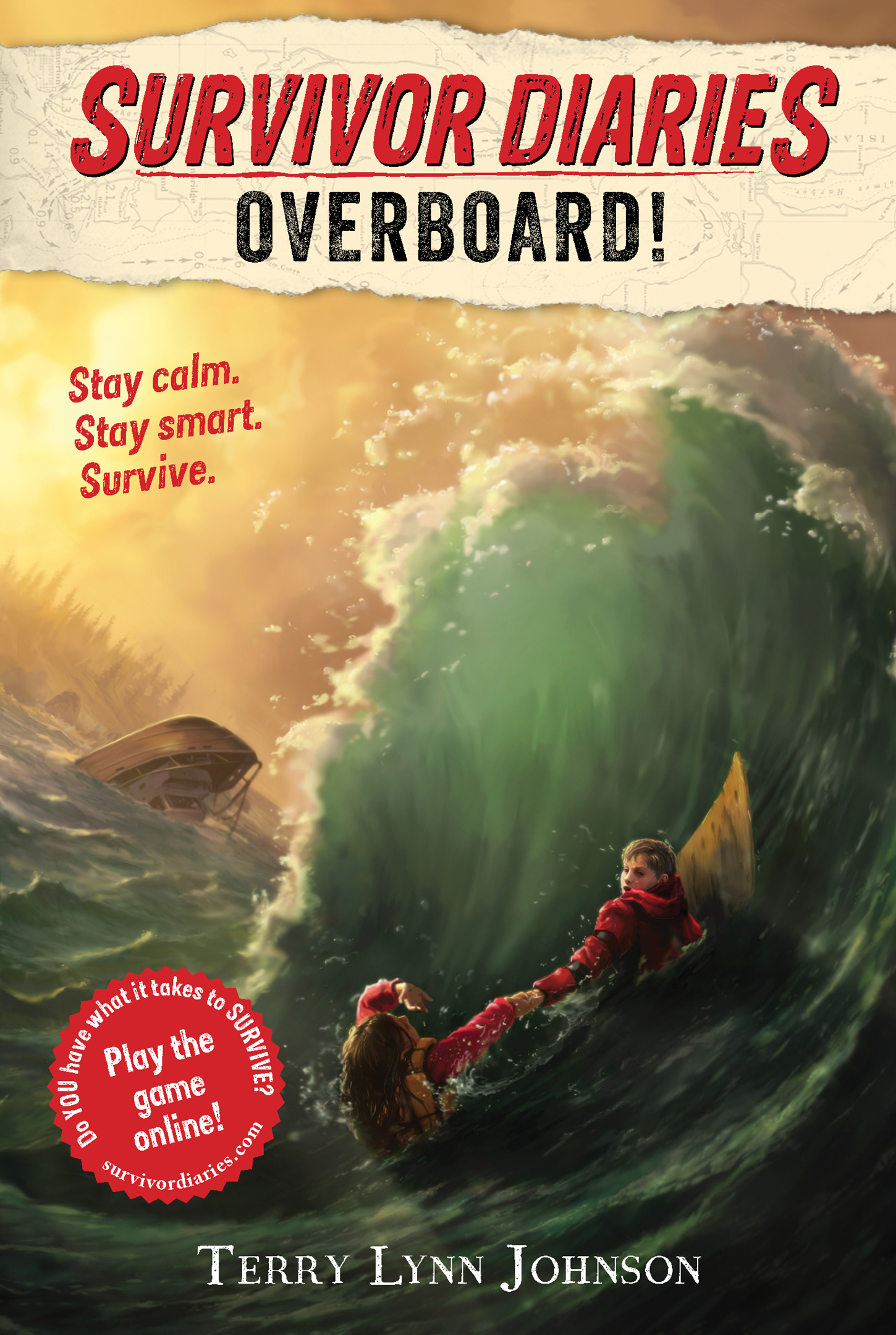