Our Lady of the Prairie

Thisbe Nissen’s sharp, sexy novel is a freight train barreling through the heart of the land and the land of the heart

“As gripping as it is hilarious.” — Vanity Fair

“I devoured this novel . . . It just made my whole being vibrate and hum with the impossible, inevitable business of loving other people.” — Leslie Jamison, New York Times best-selling author of The Empathy Exams and The Recovering

For Phillipa Maakestad—theater professor and mother to a troubled, volatile daughter—life is finally, miraculously calm. What better moment, then, to fall headlong into a passionate affair, fly off to France with her new lover, and effectively take a match to her life on the Iowa prairie?

As she steps back to survey the damage and determine her way forward, Phillipa must contend with a wedding-day tornado, a menace of a mother-in-law who may or may not have been a Nazi collaborator, and the tragicomic revenge fantasies of her otherwise docile husband. Which is to say: the damage is not easily contained, and the path ahead is not clear.

Thisbe Nissen offers up a fever-pitched, bitingly funny novel about a woman’s quest to find her place in her own story. Our Lady of the Prairie is a bravura performance—a twister sweeping through the heart of the land and the land of the heart.

About the author
Thisbe Nissen

THISBE NISSEN is the author of a story collection, Out of the Girls' Room and into the Night, and two novels, The Good People of New York and Osprey Island. Her fiction has been published in the Iowa Review and the American Scholar, among others, and her nonfiction has appeared in Vogue, Glamour, and elsewhere. She teaches at Western Michigan University and lives in Battle Creek, Michigan, with her husband, writer Jay Baron Nicorvo, and their son.

My Husband Was Dresden

From the moment I saw Lucius Bocelli I wanted to go to bed with him. If I’d known then what Michael would put me through by way of penanc?e—in twenty-six years of marriage you’d think if he’d so badly needed to spank me he’d’ve found an opportunity—?I might have simply given in. Instead I spent three months in tortuous longing before succumbing to all I felt for Lucius. But retrospect is convenient, life less so. Even if I should have foreseen—or already known of—my husband’s peccadilloes, I still could not have gazed into the future to know, say, the path that May’s tornado would take across Iowa, straight through our daughter’s wedding. I met Lucius in late January. I’d just arrived in Ohio for my semester’s teaching exchange; he was recently back from a year and a half in France, a research sabbatical he’d extended with an additional six-month leave. His work was on Nazi collaborationists of the Vichy regime, and he’d be headed back to France that summer, but when we met it was only January. The Democrats hadn’t even nominated someone to run against Dubya and bar him from a second term. Bernadette—the mother-in-law whose belligerent existence I’d suffered for more than half my life—?was still alive and kicking me at every available opportunity, and Ginny wasn’t yet married to Silas Yoder, or pregnant and off her psych meds and once again as miserable as she’d been before the electroshock. Orah and Obadiah Yoder were already dead—?Silas and Eula’s parents, hit head-on and killed by an SUV, in their own buggy in front of their own Prairie farm—and a year had done little to dissipate that pain. The birth of Eula’s baby had diverted us, yes. My point is this: when I met Lucius my life was more stable than it had been in twenty-five years. I met him, and I wanted him—?more clearly, and maybe less complicatedly, than I think I have ever wanted anything in this life.

There’d been a reading at the U of O—a progressive political commentator—with a gathering afterward at the dean’s home, for the obligatory university-issue cheese-and-cracker platters and a Midwestern supermarket arrangement of crudité: concentric moats of gray-tinged cauliflower, parched baby carrots, and inedibly mushy grape tomatoes surrounding the ranch dip bowl. Guests represented the left of the U of O faculty, and there was a collective relief at being surrounded by other sane people at a time when the main—hell, the only—??criteria for sanity were (a) abject terror at the state of the union, and (b) downright hatred of the president, who had about as much ability to run the country as one of our thickheaded, eighteen-year-old frat boys. And less humility, which is almost inconceivable. The wine flowed that night, and it was lousy, but it was on the U, so we drank with zeal. In Ohio, at the end of January, four-foot snowbanks turning the campus into a giant ice maze, you drink what’s offered, and you’re grateful.

I’d gotten a lift to the dean’s house from Anthea Lingafelter, a Romanticist. As we entered, I saw, leaning in the arch of the foyer, a man I took instantly to be the actor Ed Harris. I’d like to imagine my next thought would have been, What the hell is Ed Harris doing here?, but Anthea had paused to make introductions and my hand was already extended as I heard her say, “Phillipa Maakestad—on loan to us—Theater.” I was beaming a sort of I-thought-Pollock-was-brilliant smile when it seemed that, of this man whose hand I was shaking, Anthea was saying, “Lucius Bocelli, History.” His expression mutated from pleased-to-meet-you to perplexity. I’d been holding his hand far longer than appropriate and dropped it abruptly, jerking away. A step behind my own actions, the soundtrack of my brain was out of sync with the picture. I shook hands with the others in the group, registering nothing. Then Anthea guided me away toward a den, slipping her parka onto a futon couch where coats were being piled.

“I thought he was Ed Harris!” I told her.

Anthea glanced back, her look inscrutable to me, and said, “Lucius?” When I made a face to say, Yes, the Ed Harris look-alike, who else?, she lifted her chin and let out a hoot—??a hoot that only became clear much later when Lucius told me of the affair they’d had years before. Anthea’s divorce, I will note, was not on Lucius’s account.

I encountered Lucius minutes later on line at the makeshift bar. He came up behind me. “The wine’s no good,” he said, “but it makes the socializing go down easier.”

I was conscious of my own breath—I heard it like the rush of wind through a tunnel—and I’m not a woman often conscious of her own breath. “I’m so sorry.” I lifted my hand toward the site of our introduction. “I thought you were Ed Harris.” I shook my head in castigation for my absurdity. A smile spread across his face, crinkling his eyes, and I saw he was older than I’d realized. For no reason I can understand, it was this that hit my pelvis: realization of his age somehow turned my breathless giddiness into grave desire.

Lucius’s eyes—??pale, pale blue—were deeply set, corners striated with wrinkles, the skin there thin and tissuey as parchment. I had to physically restrain myself from lifting my hand to run a thumb across that delicacy. His face was so hard and sculpted it made that thin-thin skin at the corners of his eyes seem all the more fragile, their sadness devastatingly palpable. To see him smile felt like a triumph, and I may have known then that I would love this man with a ferocity, and an urgency, and a gravity I had never experienced before.

He dropped his chin, tucked it to his neck, and peered at me as if over reading glasses he wasn’t actually wearing. “I suspect,” he said, “you just can’t tell one bald man from another.”

His grin broke wide again ?— ?the shine of those sad, deep-set eyes. He conceded my point.

“Now you’re talking really bald—I have my scruff.” He fluffed at his hair. “My tufts.”

“Which,” I pointed out, “is why I thought you were Ed Harris and got a bit tongue-tied.”

Without thinking, I shifted my hands on my hips to cover my knuckles, absurdly hiding the ring he’d already seen. “You?” I asked.

He tipped back his plastic glass, drained its dregs, stuck it in the underarm crook of his blazer, and held his hands out as though I’d asked to inspect his fingernails. Because of the cup, one arm was hitched up shorter than the other, his back bent as if in halfhearted Igor impersonation. His fingernails were clean, cut short, healthy pink, and he had small hands, downy with grayed hair I could tell had once been golden blond. They made me think of lifeguards on the California beaches of my childhood—muscled hands, thick-veined, wiry like the rest of him; he’s sinewy and compact as a greyhound. He wore no ring. “Thrice was plenty,” he said, then straightened and caught his cup

“I’ve been a Thisbe Nissen fan since page one of The Good People of New York. And now, loyalty rewarded! Our Lady of the Prairie delivers this wonderful author’s characteristic wit, layered with delicious dysfunction, poignancy, and heart.”

“Our Lady of the Prairie is a tumultuous romp, both cautionary and liberating. A mystery winds its way through these pages, as Thisbe Nissen explores marriage, lust, midlife crises and motherhood, crafting complex portraits not only of her characters but also of the land they inhabit; and, one thing is clear, this novel was written in praise of the prairie itself.” 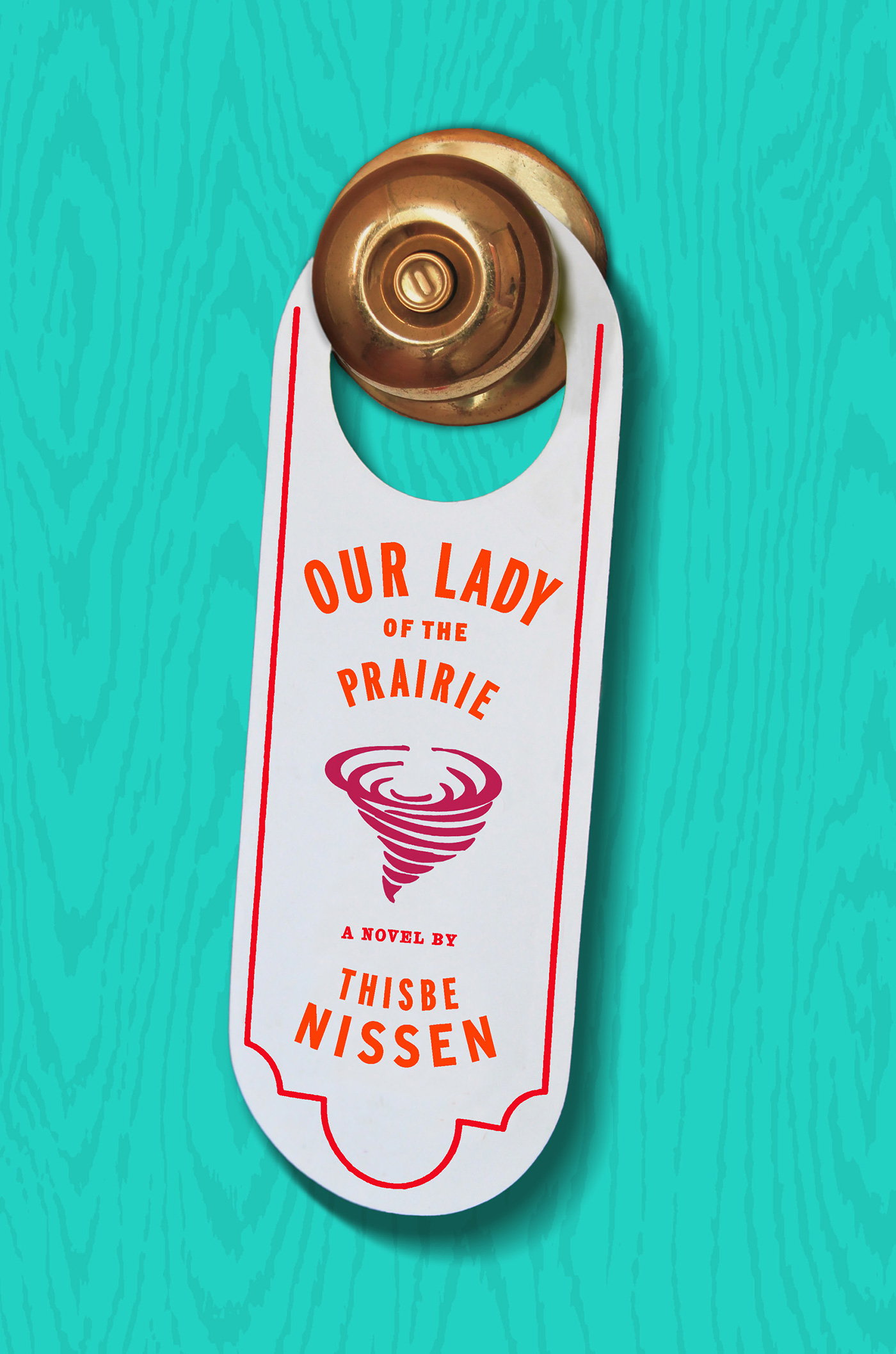