Our Boston: Writers Celebrate the City They Love

An anthology of essays about Boston and what it means to the contributors, including Susan Orlean, Kevin Cullen, Mike Barnicle, Pico Iyer, and many more.

What defines Boston? Its history? Its landmarks? Its sports teams and shrines?

Perhaps the question should be: Who defines Boston? From Henry David Thoreau to Dennis Lehane, Boston has been beloved by many of America’s greatest writers, and there is no better group of men and women to capture the heart and soul of the Hub. In Our Boston, editor Andrew Blauner has collected both original and reprinted essays from Boston area writers past and present, all celebrating the city they love. In the wake of the Boston Marathon bombing, they responded to his call to celebrate this great city by providing almost all brand-new works.

From Mike Barnicle to Pico Iyer, Susan Orlean to George Plimpton, Leigh Montville to Lesley Visser, Pagan Kennedy to James Atlas, here is a collection of the best essays by our best writers on one of America’s greatest cities.

About the author
Andrew Blauner

Andrew Blauner is the founder of Blauner Books Literary Agency. He is the editor of Coach: 25 Writers Reflect on People Who Made a Difference; Brothers: 26 Stories of Love and Rivalry; and Central Park: An Anthology. He is also co-editor of Anatomy of Baseball. A graduate of Brown University and Columbia Business School, he is a member of PEN and the National Book Critic Circle.

Running Toward the Bombs

Dawn broke clear and clean over Boston on Patriots’ Day, 2013, and Dan Linskey was up before the dawn.

He walked down Boylston Street, near the finish line of the Boston Marathon, as he does every Patriots’ Day, because this is his town and this is his baby. Dan Linskey is the chief of the Boston Police Department. And he owns every big outdoor event in the city, from the raucous celebrations that follow the championships of Boston’s sports teams, which seem to happen every other year, to the star-spangled festival when the Boston Pops serenades the city every Fourth of July.

His was not an idle walk. As chief of the department, Linskey had drawn up several disaster scenarios, and the reality is that in the post-9/11 world, the marathon, like every other outdoor event in Boston, was a target for terrorists.

Still, there was nothing on this sunny morning that led Linskey to believe it would be anything other than the day it usually is, the people lined along Boylston, five deep, cheering the runners on those last few hundred yards, toward the finish line at the Boston Public Library.

Patriots’ Day is a holiday in Boston recalling the shots fired at Concord and Lexington, just outside the city, when a bunch of farmers took on an empire and won. The traffic is light. Out of the corner of his eye, Dan Linskey spied a woman who had set up camp on the corner of the Ring Road, blocking it. The Ring Road was an access point for emergency vehicles to Boylston Street.

This being Boston, she gave it right back to him, informing him that she had got up early to stake out a prime spot on Boylston and she wasn’t giving it up, no matter what he said.

Dan Linskey, a cop for twenty-seven years, a Marine before that, can be nice when he has to be. But he can also be firm. With this woman he was firm, and soon she had begrudgingly decamped to a place farther down Boylston. She was angry, furious actually. But in moving, at Dan Linskey’s insistence, that woman unwittingly saved many lives.

Bill and Denise Richard told the kids the night before that they were heading into town from their Dorchester home to see the marathon. Their children—Henry, nine, Martin, eight, and Jane, seven​ — ​were excited. It was a family tradition, and like all family traditions, it was something cherished.

Bill and Denise were what some suburbanites would call homesteaders. From the 1970s right through the end of the twentieth century, many people had left Boston in what the demographers dubbed “white flight.” The Richards were the other side of the coin. They chose to live in the Ashmont section of Dorchester, which like a lot of neighborhoods in Boston’s inner city had seen something of a decline in the second half of the twentieth century.

But the Richards were part and parcel of Ashmont’s revitalization. They sent their kids to the local charter school. They, like others, saw things changing for the better when Chris Douglass, one of the city’s premier restaurateurs, opened a high-end place, the Ashmont Grill, right in the middle of the neighborhood in 2005. And the Richards were prime movers in getting the state to invest heavily in rebuilding the Ashmont train and bus station. The Richards were among those who breathed new life into an old neighborhood, giving it new life and endless possibilities.

The Richard kids were giddy with excitement, leaning against the metal barriers, watching the runners, who were different colors, like the flags of all the world’s nations lining the last portion of the marathon route.

Standing there, enraptured by the sights and sounds of people finishing the last steps of twenty-six miles, the cheering sustained, neither the Richards nor anyone else noticed as a nineteen-year-old Chechen kid named Dzhokhar Tsarnaev, wearing his baseball cap backward like many other kids in the crowd, approached from behind. Tsarnaev placed a backpack right behind eight-year-old Martin Richard, then continued to walk up Boylston Street.

They call the fire station Broadway, even though it’s in the South End, a mile away from the real Broadway in South Boston. It houses Engine 7 and Tower Ladder 17, and it is one of the busiest firehouses in the city.

On Patriots’ Day, as the runners passed the finish line on Boylston, the men from Engine 7 were around the corner, at an apartment building on Commonwealth Avenue, Boston’s grandest boulevard. A group of college students had managed to put a gas grill on a narrow balcony to cook hamburgers and hot dogs while they partied Patriots’ Day away.

Two firefighters, Benny Upton and Sean O’Brien, looked at each other, thinking that however smart these kids were to get into college, they couldn’t be that smart.

“Do you guys know how dangerous this is?” Upton asked them.

The college kids were offering sheepish apologies when there was a boom from around the corner.

Upton, a former Marine who had done three combat tours, he knew exactly what had happened.

“Bomb!” he yelled, and he and the men from Engine 7 and Tower Ladder 17 were soon running at full clip up Exeter Street, right into the belly of the beast. They had only just begun running when they heard a second explosion.

“Jesus Christ,” Tommy Hughes said to himself as he ran. Like Upton, he was a former Marine and could only imagine what lay around the corner on Boylston.

Actually, he later told me, he couldn’t imagine it. It was worse than anything he saw in the military. Acrid smoke hung in the air and people lay scattered across the sidewalk. There were pools of blood, body parts. It was, at first, eerily quiet and the firefighters instinctively ran to the sides of the wounded.

Upton, like the other firefighters, knew it was terrorism, and they assumed they were running into secondary explosions, and perhaps a biochemical attack. But they, like their brother and sister police officers and paramedics and EMTs, ran toward the bombs anyway, because that’s what they do.

Tommy Hughes was almost immediately faced with a Hobson’s choice. Two children, one a boy, the other a girl, both missing a leg, lay on the sidewalk, like fish out of water, wriggling helplessly. Hughes reached down and picked up the boy, who was closer to him, but his guilt was assuaged immediately because another firefighter picked up the girl.

The little boy was as much in fear as he was in pain. Tommy Hughes hugged him as much as he carried him.

Sean O’Brien, a firefighter from Engine 7, was almost as stunned as the victims, because when he rounded the corner he came face to face with Bill Richard, a friend from the neighborhood in Dorchester.

“I can’t find Denise!” Bill Richard yelled to Sean O’Brien. Bill Richard was clearly in shock, his ears numbed by the explosion.

It was a short-lived blessing, because he did not fully comprehend, in that moment, that his family lay scattered around him: his son was dead, his daughter was missing

"Like the remarkable city to which they pay tribute, the pieces assembled in this book are diverse, engrossing, illuminating, emotional, funny — and glorious. Anyone who loves or has ever loved Boston will want a copy." — Claire Messud, author of The Emperor’s Children and The Woman Upstairs

"Our Boston gives us skilled, knowing, warm, observant writers who embrace the city personally, pointedly, suggestively, and in so doing, tell us so very much about our country, ourselves. Their Boston is a telling reminder of a nation's story." — Robert Coles, Pulitzer Prize–winning author of Children of Crisis and The Call of Service

"This book is for anyone who remembers the Combat Zone and Filene's Basement and the old, un-air-conditioned Garden, who knows where they were in the summer of '67 and the winter of '78 and the fall of '04, who waited in line for Steve's Smoosh-ins in Somerville and still goes to the original Dunkin' Donuts in Quincy. It's also for anyone who loves great writing and learning about the lives of great writers. It's an absolute gem of a book — as perfect as a Legal lobster dinner or a Toscanini's sundae." — Seth Mnookin, author of The Panic Virus and the New York Times bestseller Feeding the Monster: How Money, Smarts, and Nerve Took a Team to the Top

"A distinguished, eloquent, and deeply felt testimony evoking not only the shadow on our hearts, but also the resolve and vitality of this great American city." — Alec Wilkinson, author of The Ice Balloon

"Our Boston is a stellar anthology, a love letter to a resilient city penned by an all-star team of writers, from Lehane to Updike to Orlean, among others. This book is as full of history and surprises as the city itself." — Tom Perrotta, author of The Leftovers

"A collection of nonfiction pieces by an impressive array of writers...A mustread for everyone who already cares about Boston and anyone looking beyond the tourist guides for a more intimate view of this iconic American city."--Booklist

"The quality of the writing is uniformly high...worthy and moving."--Kirkus Reviews
We’re sorry 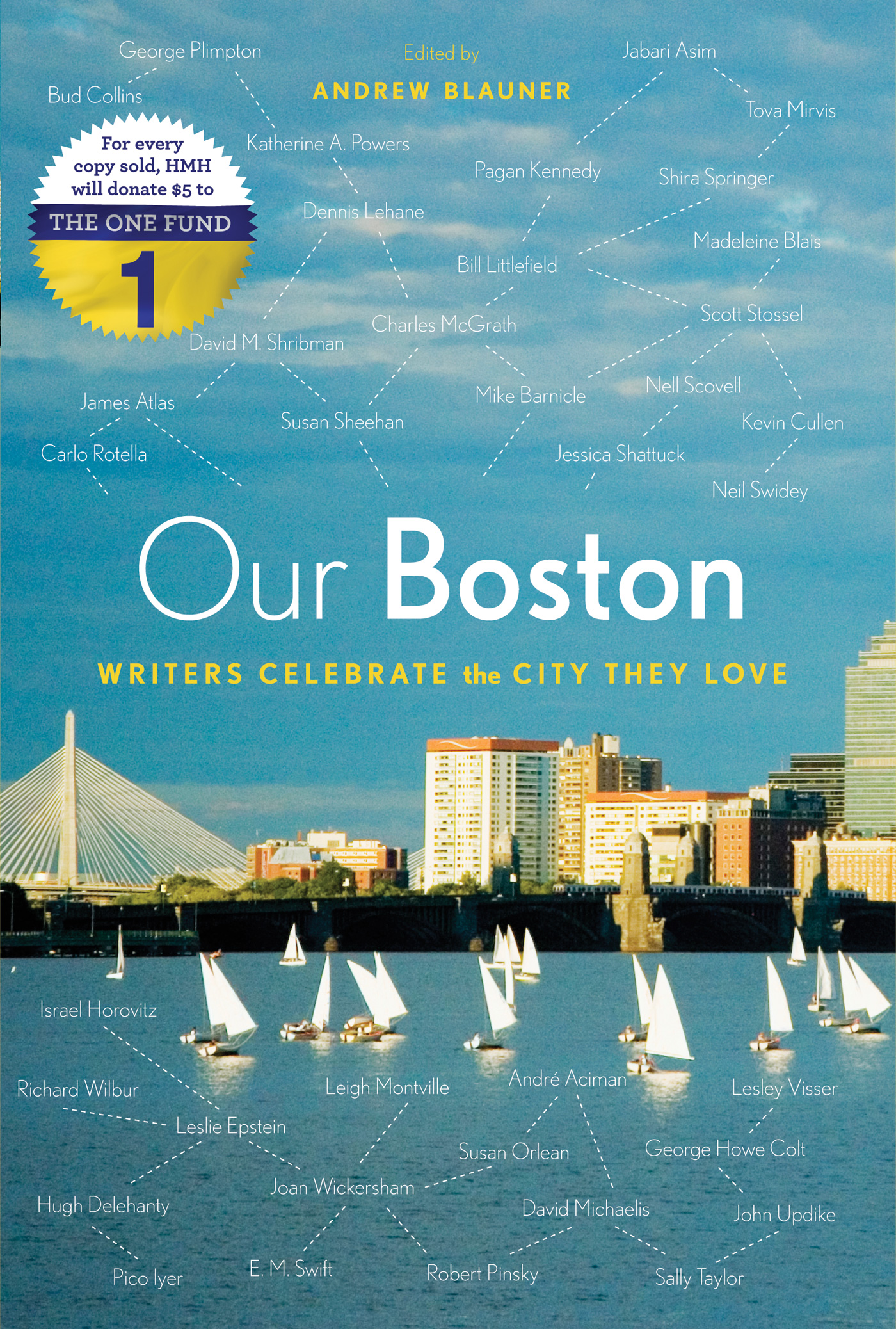